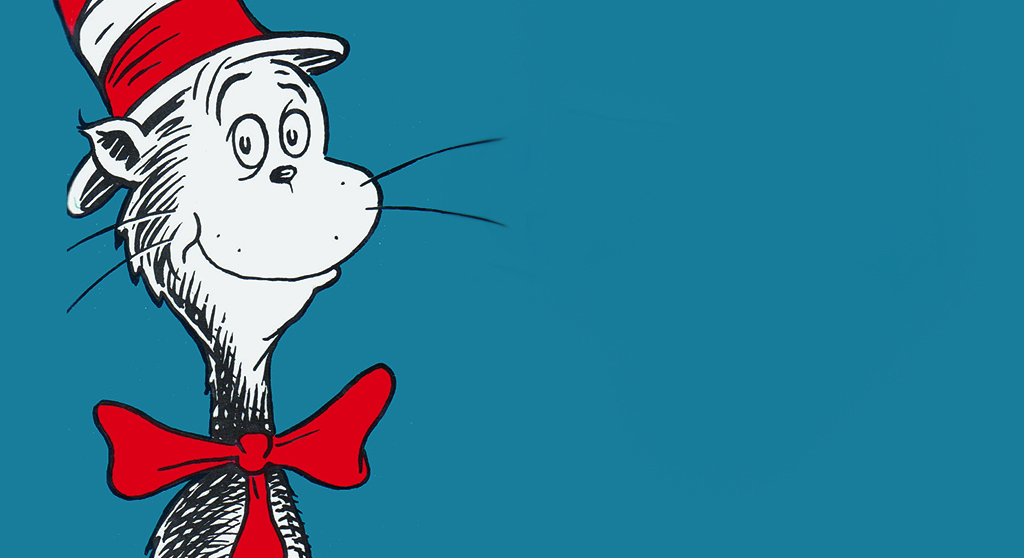 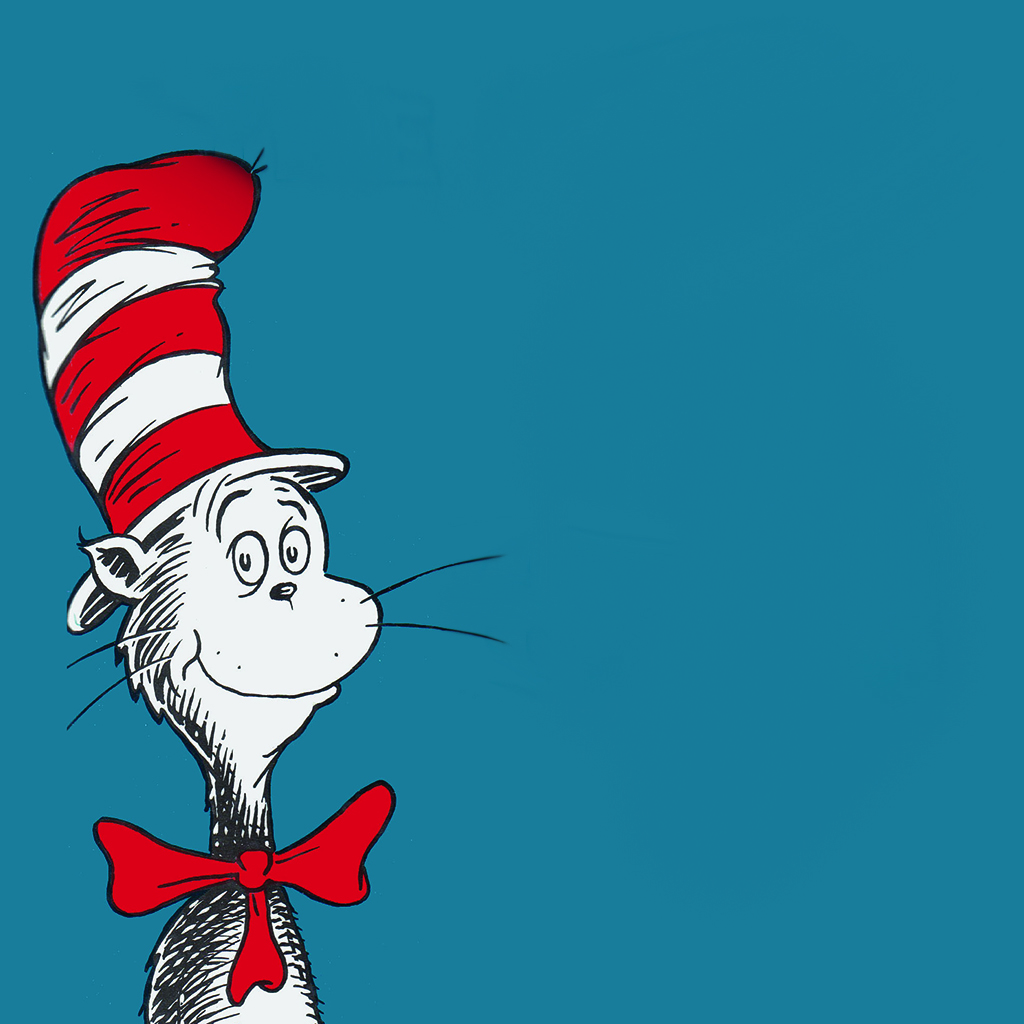 No doubt, the experience of living through a viral pandemic will have a lasting effect on our worldview and behavior. Children growing up in the post-Covid era may come to regard shaking hands as a quaint custom like the curtseying and bowing depicted in Victorian novels. And parental warnings about “stranger danger” may become even more urgent. That got me thinking about the questions a children’s classic such as “The Cat in the Hat” (Dr. Seuss, 1957) might prompt in readers today.

It’s almost uncanny how perfectly Dr. Seuss describes the cabin fever millions of people of all ages are feeling after weeks of sheltering in place and social distancing. We can all relate to Sally and her brother, the story’s narrator:

So we sat in the house.
We did nothing at all.
So all we could do was to
Sit!
Sit!
Sit!
Sit!
And we did not like it.
Not one little bit.

When the Cat in the Hat bursts through the door to entertain the children, we notice immediately that he’s wearing gloves. Good. But where’s his face mask? Has he been tested? Might he be immune? Or does the Cat with the extravagant hat habitually flout the rules and blame his predecessor, like that man with the hat on TV? He doesn’t seem to show any symptoms, unless his fervent desire to show off his “good games” and “new tricks” is fever-driven. Or could his wild inventions be a sign of mental illness?

Sally and her brother seem appropriately wary of an unmasked stranger boldly entering their safe space. They are not alone; their pet fish does not want him to touch his bowl, even if the Cat is wearing gloves and using his umbrella to hoist the bowl while standing on a ball, holding a book in the other hand, and balancing a cup on his hat. Anyone can see that this game of “up-up-up with a fish” involves way too much touching! 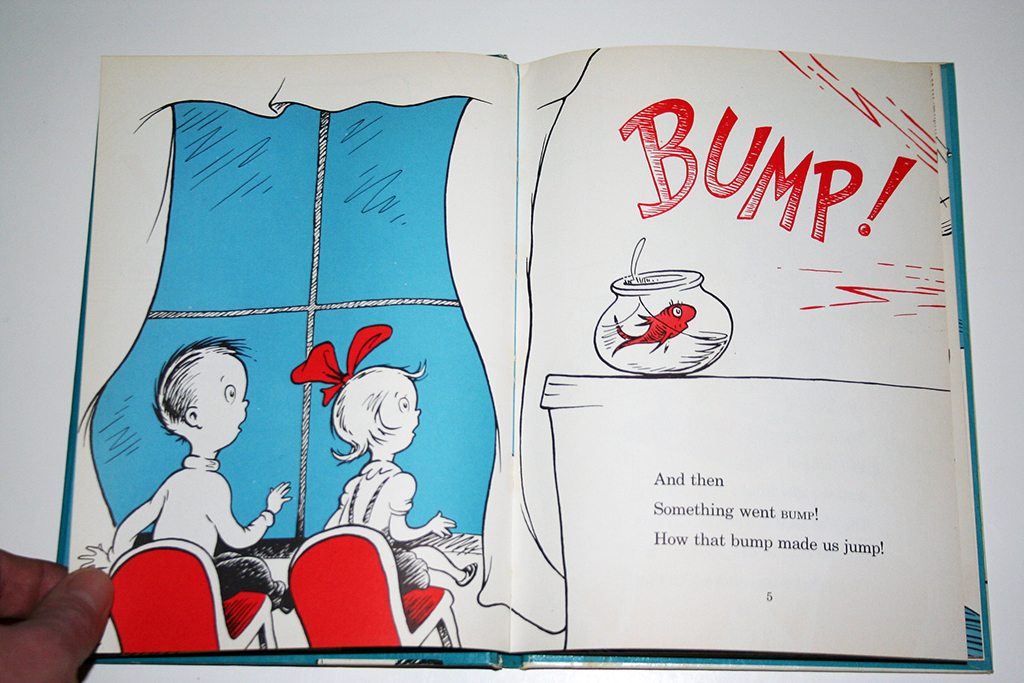 A peek inside a “Cat in the Hat” third edition shows self-isolating kids with cause for concern. (Photo: Daniel X. O’Neil via Flickr)

And that’s before the Cat adds a cake, a second book, a little toy ship and some milk on a dish to his balancing act. Sally and her brother, standing a safe distance away, mouths agape, may be worrying they won’t have enough wipes to disinfect all the objects the Cat has already touched and breathed on. And then the Cat grabs another book, a rake, a little toy man and a red fan before finally falling down with a bump. What a mess! Now Sally and her brother may well be wondering if their whole house will have to be declared a biohazard.

The Cat runs out of the house, but “fast as a fox” he returns with a big box. Wait! Doesn’t he know that packages have to stay outside for at least three days before being brought in? Again ignoring protocol, the Cat opens the box and releases two more uninvited guests, Thing One and Thing Two, who demand to shake hands with the children. Even worse, neither Thing is wearing a mask or gloves. The mixed messages spark still more anxiety:

And Sally and I
Did not know what to do.
So we had to shake hands
With Thing One and Thing Two.
We shook their two hands.
But our fish said, “No! No!
Those Things should not be
In this house! Make them go!”

If only everyone trusted the wise counsel of their fish like they do, say, the advice of infection disease expert Dr. Anthony Fauci. But the Cat, who still has taken no responsibility for the terrible mess he’s made or the exponentially growing danger he’s unleashed, tries to stifle, and even contradicts, the fish’s warning:

“Have no fear, little fish,”
Said the Cat in the Hat.
“These Things are good Things.”
And he gave them a pat.
“They are tame. Oh, so tame!
They have come to play.”

If the little fish could stretch his fin that far, he’d be holding his forehead when the Cat gives Thing One and Thing Two permission to run around the house flying kites, ignoring the science of aerodynamics and all evidence that such a game is far too risky to be fun.

Time is running out to rid their house of these unruly Things and the reckless Cat. Lacking the equipment he needs, Sally’s brother – could his name be Andrew? – finally gives up trying to stay in the Cat’s good graces and takes bold, decisive action. He somehow procures a hard-to-come by net and captures the Things.

Still accepting no responsibility for creating such a chaotic situation, the Cat exits, pouting “with a sad kind of look,” as if ready to label Sally’s storytelling brother and the fish members of the liberal media who ask horrid questions and never cut him any slack. The children are relieved, but no one breathes easy, least of all the fish, who despairs at the vast challenge still facing them:

“And this mess is so big
And so deep and so tall,
We can not pick it up.
There is no way at all!”

We do not yet know how or when the coronavirus story will end, but like most children’s literature “The Cat in the Hat” delivers on our expectations of a happy ending. The Cat returns driving a three-wheeled vehicle that picks up everything with four mechanical arms and sweeps up behind with a pair of gloved hands. Pleased with his heroics, the Cat makes his final exit with a tip of his trademark hat. Order is restored, though it’s unclear whether all surfaces have been properly disinfected, or whether Sally and her brother have seen the last of the Cat.

The children are left to decide whether to tell their mother about “the things that went on there that day.” It seems doubtful she’d believe them, even if they tried. After all, the Cat brought chaos like no one has ever seen before!

Until now, that is.