‘The Boys in the Band’: Having a gay old time, from the stage to Netflix in over a half-century 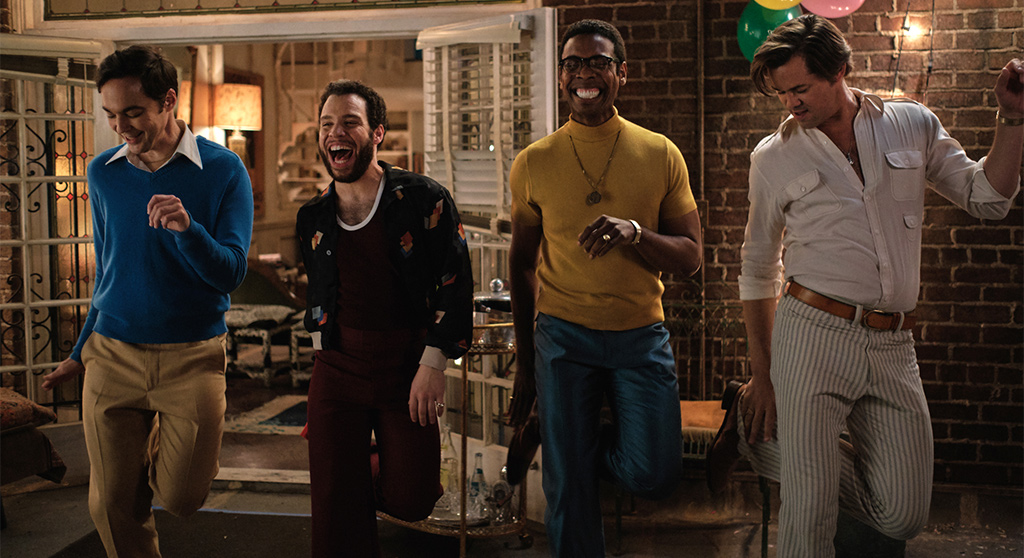 ‘The Boys in the Band’: Having a gay old time, from the stage to Netflix in over a half-century

It seems that 1968 is all the rage in 2020. Last week we had Aaron Sorkin’s “The Trial of the Chicago 7” about those held responsible for the 1968 Democratic Convention riots; over at the Roxbury International Film Festival there’s “The Sit-In: Harry Belafonte Hosts The Tonight Show,” a documentary about NBC’s socially minded response to race riots in the late 1960s. Now there’s this cinematic adaptation of Mart Crowley’s “The Boys in the Band,” a play weaving in and out of a gay birthday party in a New York City flat that’s thrown into chaos when a straight man shows up. The revisit is not so much fond nostalgia, but a dialogue about where we are now: divided, having seemingly made little progress.

Learning of the Ryan Murphy (“Glee,” “American Horror Story”) produced project, I wasn’t quite sure another film version of Crowley’s honest and open look at gay culture pressure-cooked by social judgment was necessary. The 1970 adaptation directed by Willam Friedkin (who would go on to do “The French Connection,” “The Exorcist” and “Cruising”) was a tight, clustered affair driven by anger and revelation. That’s somewhat less true here. There’s more bounce and ebullition before the sour turn of confronting one’s past and hard truths. The play was resurrected on Broadway in 2018 for its 50th anniversary, and the stage director there (Joe Mantello) and entire cast boot up for this Netflix production – with better sets, multiple takes and a bigger platform.

The cast is excellent, especially Jim Parsons as party host Michael, who inadvertently invites an old college friend, Alan (Brian Hutchison), who’s straight (is he?). Michael’s got a lot of catty sass – “Just because I wear expensive clothes doesn’t mean they’re paid for” – which peels away when Alan shows up and strikes another party member in the face for using female pronouns for men and being a “pansy.” And the guest of honor hasn’t arrived. From there the boozy evening spirals inward and downward, not so much because of Alan, but because of global self-hating that’s in frame from scene one. These are deeply carved characters that have been known and lived in. The masks get pulled off and you’re in, in deep.

Some telling scenes are Alan trying to male bond with the other square-jawed human in a coat and tie in the room, Hank (Tuc Watkins), who’s still married but “roommates” with hovering beau Larry (Andrew Rannells). We get to compare past and present with all those pronouns, and there are two men of color in the room: the extremely flamboyant Emory (Robin de Jesús), who receives that punch, and the bookish Bernard (Michael Benjamin Washington), who get into a debate about the use of certain words (“Uncle Tom”) and hierarchy and elitism within such communities that isn’t quite talked about enough. Both actors nail it, and of course the birthday boy Harold (Zachary Quinto) does finally show up with the grand strut of Tim Curry in “The Rocky Horror Picture Show” (1975).

For me, the film triggered memories of awkward early origins in Boston. The product of a small, working-class town in Connecticut and the recent grad of a homogenous college in the wooded remotes, I moved to the “big city” and a garden flat in the South End with college friends, taking a job as a busboy and waiter at the Copley Marriott. Behind the swinging doors the chefs called many of my male coworkers “she,” “her” or referred to them collectively as “the girls.” It was done with a degree of camaraderie, but it perplexed me – and became something I would gain infamy for after the night I finally joined my coworkers for after-shift drinks at the place they all hung out at. When I asked a fellow server about the kitchen banter, he looked at me blankly for a good, long time before breaking into uncontrollable laughter. When he finally composed himself, he very gently explained to me that he was gay, that almost all the other waiters were and that I was at that moment in the middle of one of the biggest gay clubs in Boston. (Club Café.) He bought me a shot, and for the next week it was all the kitchen staff would talk about.

Back to that Netflix film: It goes on a tad too long, but it’s full of rich performances, painful revelations and searching souls.