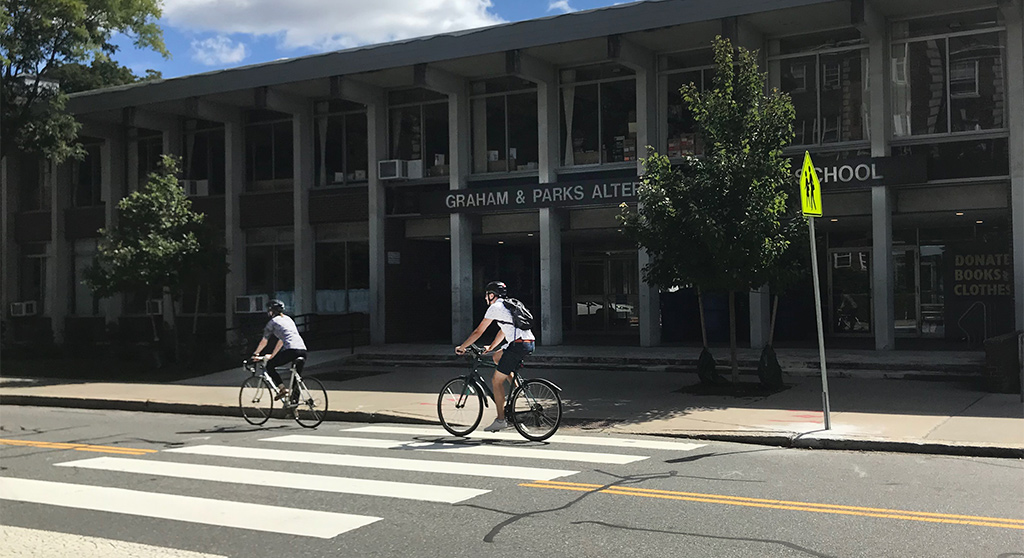 Bicyclists pass by the Graham & Parks School in Neighborhood 9 in September, before its partial reopening. (Photo: Marc Levy)

The first yellow school buses reappeared on Cambridge streets last week, and an initial glimpse into the reopening of the public schools was provided – including a teacher shortage still being filled – at the School Committee meeting on Tuesday.

The district moved from its Phase I reopening plan, which began Sept. 16 with remote learning for all students, to Phase II as of Oct. 13, when school buildings opened for in-person class for some students. Families in grades JK through Grade 1, and high-needs students in grades 2 and 3, were given the option to attend in-person classes or stay with remote learning. Students in substantially separate special needs and sheltered English immersion programs were also given the option.

Data released by the district show that participation for JK through third grade is roughly balanced for racial and socioeconomic groups, despite equity concern expressed by committee members and the public in meetings before Phase II. Cambridge Public Schools superintendent Kenneth Salim noted that families had the option to change their children’s enrollment until Sept. 30, which made it difficult to predict who would select in-person learning until the program was underway. Committee member Rachel Weinstein asked for reports that separate second- and third-grade demographic data, to ascertain if the district’s goals of prioritizing seats for students with the greatest needs (those with individualized learning plans and English-language learners) skewed the demographics.

The district offered teachers the option to request remote teaching assignments or a leave of absence for personal reasons related to Covid-19 exposure. Requests from 282 educators were received. The majority of requests to teach remotely were granted.

To accommodate the increased need for staff to teach in in-person and remotely, the district created 128 one-year full-time equivalent educator positions: 42 teachers, 65 paraprofessionals and 21 building and extended-term substitute teachers. Six district-based staffers were redeployed to teach in classrooms.

On Tuesday, there were 22 open positions that were expected to be filled in the next two weeks, according to Lisa Richardson, the district’s chief talent officer.

The district provided average classroom size, noting that the maximum in-person class sizes are determined by a 6-foot social distancing requirement: The majority of in-person JK and kindergarten classes have an average of 10 students, and first through third grades average 12 students per class, Salim said. Remote learning class size varies more widely, as there are no space or social distancing constraints.

Some teacher teams, including at the Tobin Montessori and in the Substantially Separate special education programs, are experimenting with teaching in-person and remote students simultaneously, Salim said.

The Wednesday schedule – which for many students is mostly asynchronous, meaning most instruction is prerecorded and students are expected to work independently – can be challenging for students, and curriculum coordinators and principals are examining how to improve instruction, Salim said.

The current Cambridge Rindge and Latin School policy of moving live classes that fall on a school holiday – chiefly Mondays – to the Wednesday of that week was discussed in a motion by student committee members Anais Killian and Nuriel Vera-Degraff and sponsored by committee members, per the body’s rules.

The student members said they created the motion in response to student feedback finding that moving a full day of live instruction to Wednesdays was disruptive to student schedules, including student club meetings, and that educators use that day to collaborate on curricula and invest in personal development.

The high school’s principal, Damon Smith, noted that there are six holidays in the school year where the shift will apply, and if the policy is changed, these weeks will have only three days of live instruction.

Member Ayesha Wilson asked if activities at the end of school day, such as study hall and flexible time, could be used for clubs and other opportunities.

The schedule is tight, with educators using time late in the school day to do caregiver check-ins and advisory meetings, Smith said, and he doesn’t “want to move a domino in one area and cause things to fall in another section.”

Vice chair Manikka Bowman suggested that additional stakeholders be invited to discuss the impact of the proposed policy change on students and educators. The committee referred the motion to the superintendent’s office for that discussion.

This post was updated Oct. 23, 2020, to correct a headline saying nearly 300 teacher requests were made just for leaves of absence.