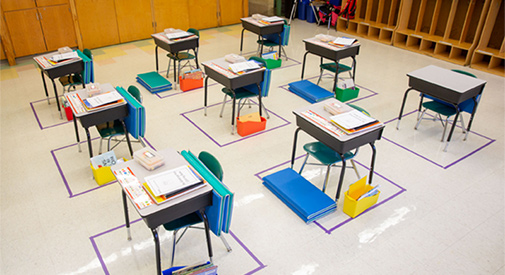 Desks are marked off in a Cambridge public school in a photo released Oct. 12 by the district. (Photo: Cambridge Public Schools via Facebook)

The first reported case of a Cambridge Public Schools student who tested positive for Covid-19 was revealed in a state report and confirmed by the city’s Public Health Department on Thursday. No additional information regarding the case has been released.

The city and school district have partnered with the Broad Institute to offer educators and other staff free, voluntary Covid-19 testing. As of Oct. 19, district staff and contractors can opt to be tested Tuesdays and Fridays. Same-day tests for symptomatic staff and students are available as needed, with test kits taken to the Broad Institute daily by Eastern Bus.

The testing program was discussed at the School Committee meeting on Tuesday, with staff participation rates in the first week of testing raising questions. (Read here how the city, schools and state cooperate on coronavirus testing and results.)

During the week of Oct. 10, there were 490 tests administered out of a staff of roughly 1,000 in district buildings, according to superintendent Kenneth Salim and chief operating officer Jim Maloney.

That suggests less than half of staff were tested, committee member David Weinstein said, asking if every adult working with school had a test before they began working with kids. “It’s incredible that we can offer that twice weekly testing,” Weinstein said. “But if we aren’t able to understand how much that is being taken advantage of, it’s hard for us to understand and assess at a public health level.” He also asked how the district encourages tests for staff who are not classroom teachers, but who are in close proximity to students, such as bus drivers.

Staff members had the option to be tested before Oct. 13, but many were working remotely, Salim said, and he was not certain a large number of people came to Cambridge to be tested. But those testing numbers also were an “aberration” reflecting limited staff in buildings on the Monday holiday and on Wednesday, which is a districtwide asynchronous learning day, Maloney said.

As to bus drivers and other such workers, logistics are still being worked out, Maloney said, and such testing has been irregular.

Member Ayesha Wilson asked about test result turnaround time, a concern highlighted by a Cambridgeport teacher who said in public comment that as of Tuesday night he had not received results on a Thursday test.

The delay was unusual, as most results are returning within 24 hours, Salim said, calling it a possible data entry issue. Mayor Sumbul Siddiqui added that she hasn’t heard complaints from residents who have been tested.

The district is prepared to notify families in a school when cases occur, including translations in multiple languages, Salim said. The district provided a decision tree for students and staff to determine if they have been exposed to Covid-19, with guidance on testing, whether to quarantine and when to return to school buildings.