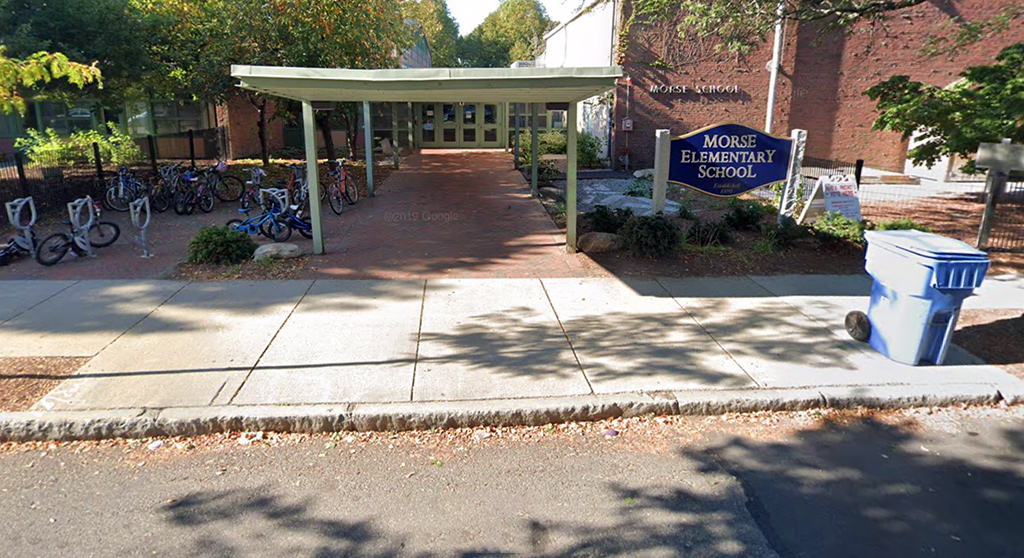 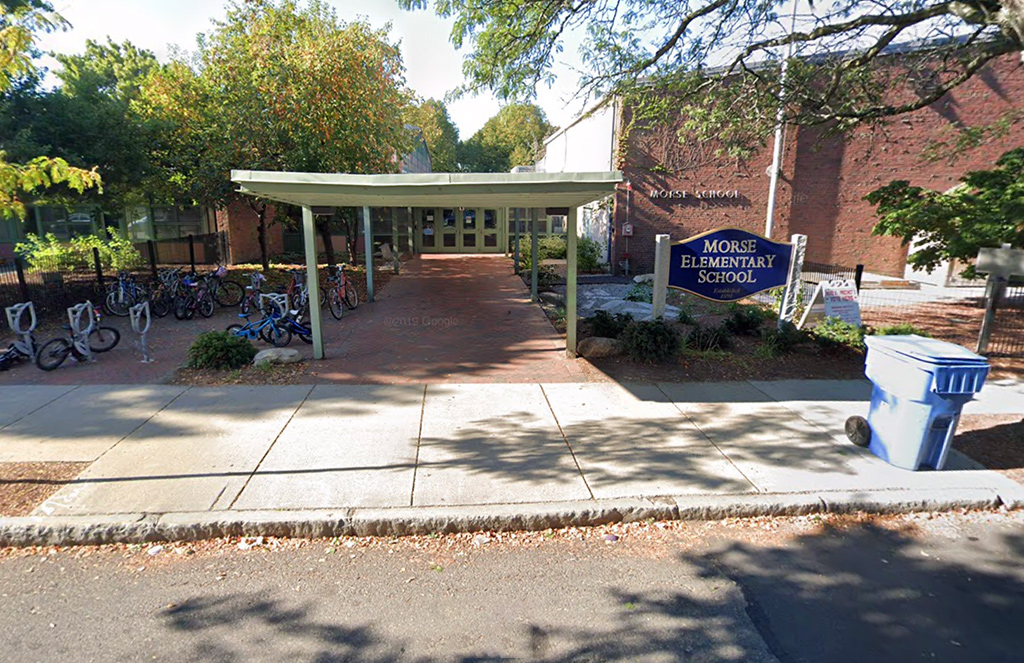 The Morse School is among those that have closed a classroom in response to a coronavirus exposure. (Image: Google)

The Mayor’s Office, school district and the city’s public health department were asked for more early Wednesday information about the two cases, but there were no additional information as of late Wednesday. A spokeswoman said more complete information had to be approved for release.

Meanwhile, district reports since the Thanksgiving holiday showed a leap in confirmed Covid-19 cases to 33 cases Wednesday from 24 the previous day, including to 22 in-person staff (from 16) and 11 in-person students (from eight).

Mayor Sumbul Siddiqui confirmed that plans are being developed for testing among older students at Cambridge Rindge and Latin School, including students in the Rindge School of Technical Arts program. The “surveillance” testing includes asymptomatic students; currently it’s students with symptoms who are brought promptly to the nurse’s office, tested and sent home to reduce exposure to the school community.

Parents need to consent to the expanded testing, which the city hopes to begin “later this week or next week,” Dobberteen said.

The decision in late summer to offer voluntary surveillance testing for all staff and for symptomatic students only was based on data that children are low risk to become ill and unlikely to transmit the disease, Dobberteen said. To provide surveillance testing, the city partnered with the Broad Institute of Harvard University and Massachusetts Institute of Technology using PCR tests to look for the presence of SARS-CoV-2 genetic material and detect active infections.

Also being considered as part of plans to implement more in-person classes for high school and upper-school students is pooled testing, in which samples from several students are mixed and a single PCR test is used to detect disease, Siddiqui said.

The benefit of pooled testing is that fewer tests are used to screen more people; reducing costs. There is a limit to the number of samples that can be pooled because of the risk of diluting a positive case so much that the result comes back falsely negative and a person may not be aware they are infected, the U.S. Food and Drug Administration says.

Some communities in the state use Rapid Antigen tests that provide results in as quickly as 10 minutes, councillor Marc McGovern noted Monday, asking if Cambridge is considering this type of test.

Dobberteen said the tests were not widely available, and what McGovern saw in other communities appeared to be pilots done with the manufacturer to evaluate accuracy and efficacy.

“We don’t use them at CHA,” Dobberteen said. “We haven’t chosen to use them within the school system because it is still an evolving technology.” The accuracy of PCR tests made them worth the cost and the wait, especially in light of the resources used in contact tracing efforts that follow a positive result, she said.

District staff participation in voluntary surveillance testing rose in the seven weeks since public schools opened to limited in-person classes, Cambridge chief public health officer Claude Jacob said. Since the surveillance testing began Oct. 15, more than 5,600 tests have been administered to 1,000 individual staff members. In that time, 59 symptomatic students have been tested; the number of positive cases was not specified.

Additional information on the program’s surveillance testing participation and test results are available on the district’s Covid-19 Data Dashboard.

The district reports cover those entering its buildings since the schools opened Oct. 13 to in-person classes serving some 1,500 mostly younger students.

Response to positive cases in schools has included closing the Amigos school for two weeks when staff and students in multiple classrooms were exposed to the virus.

Before the overnight leap in cases seen Wednesday, Gerald Yung, principal of the Dr. Martin Luther King elementary school, notified the community of a positive case Tuesday, saying the appropriate classroom would be deep cleaned while its staff and students are in quarantine. Contact tracing by the city’s health department indicates that exposure was limited to the classroom, and in-person classes will continue elsewhere at the school.

The Graham & Parks, Peabody and the Morse elementary schools closed one classroom each in late November, bringing the number of shuttered in-person classrooms to eight.

This post was updated shortly after posting to correct information about schools that had closed classrooms.