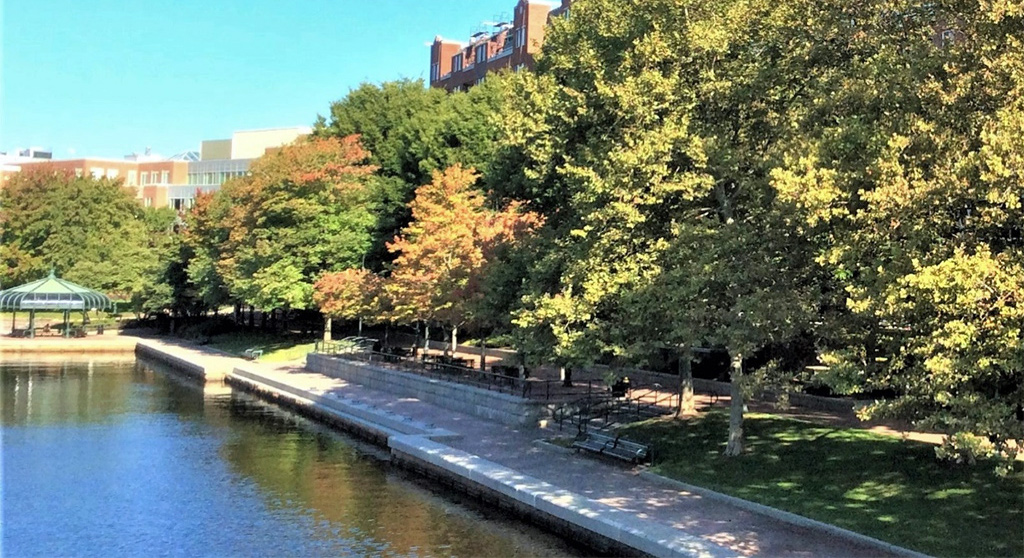 If you search online for a map of Lechmere Canal Park you’ll also find maybe 100 photos and seven videos, even one with a label in Russian. This little spot of earth is treasured by us and visitors alike, and the canal itself is historic – built in 1895, it once served as an active port for Boston Harbor.

Noted landscape architect Carole Johnson designed this park by working off the now 42-year-old East Cambridge Riverfront Plan, honoring the city’s desire to maintain the historical character of the neighborhood. The City Council mandated that any part of the development around the canal “should complement and harmonize with adjacent land uses . . . with respect to . . . height, landscaping and screening,” according to the plan’s guidelines. The urban design for the area and Johnson’s design for the park received awards.

Now, jump to 2020, and a developer has filed for a special permit to begin redevelopment of CambridgeSide and the park. The plan ignores Johnson’s historical design: a classical six-sided gazebo, traditional benches, runner’s gravel and brick paving. Instead, the new design would rudely ram in a stark contemporary steel and glass pavilion, only 50 feet from the existing gazebo. Not only is the new pavilion discordant – it is unnecessary. Other changes include replacing an iron railing with a plexiglass fence and replacing the terra cotta runners’ gravel with light tan-colored boardwalk. (We believe the gravel is safer because it is less likely to form slippery winter ice.) Too, there’s clunky seating shown in conceptual illustrations: 6-foot high-backed benches, a boomerang shaped bench and huge, bed-sized chaise lounges that could encourage illicit behavior. Plans also show the historic red brick paving replaced in places by gray and white hardscape. None of this is in keeping with the original Riverfront Plan. 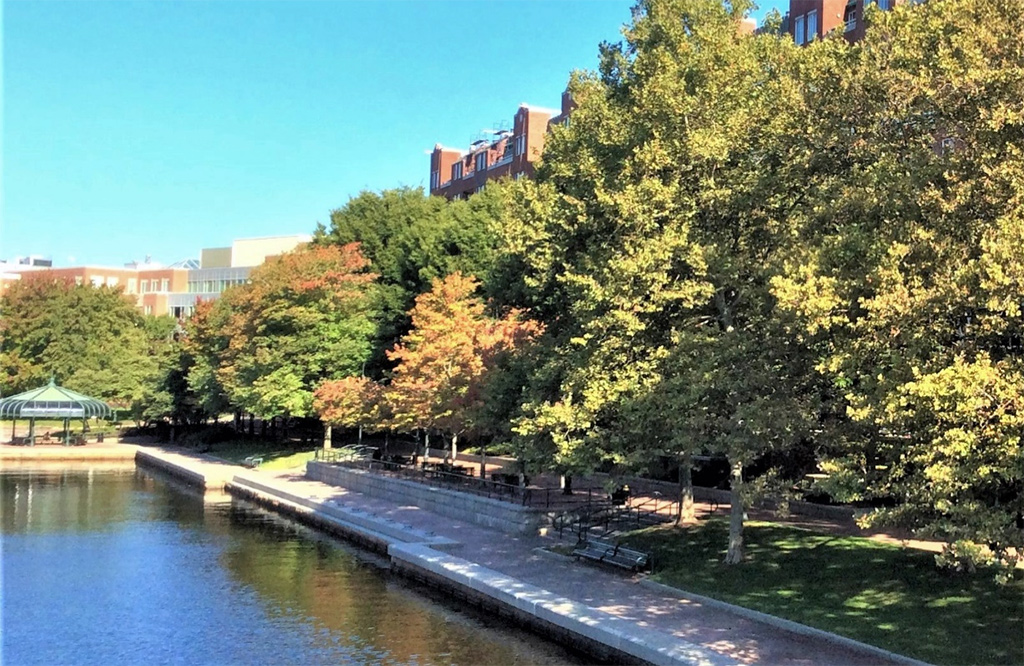 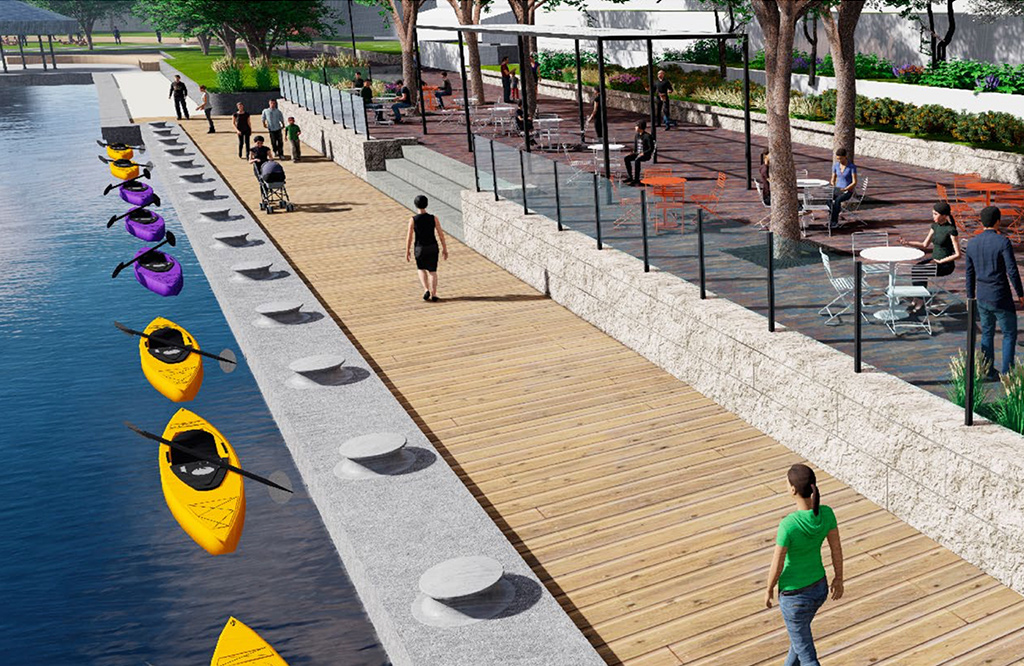 A plan for the “front yard” of the Thomas Graves Landing condominiums include a glass pavilion and plexiglass fence, boardwalk and movable furniture – clean cut but cheap-looking and jarring against the historical design of the park and existing gazebo at upper left. (Image: Elkus Manfredi Architects) 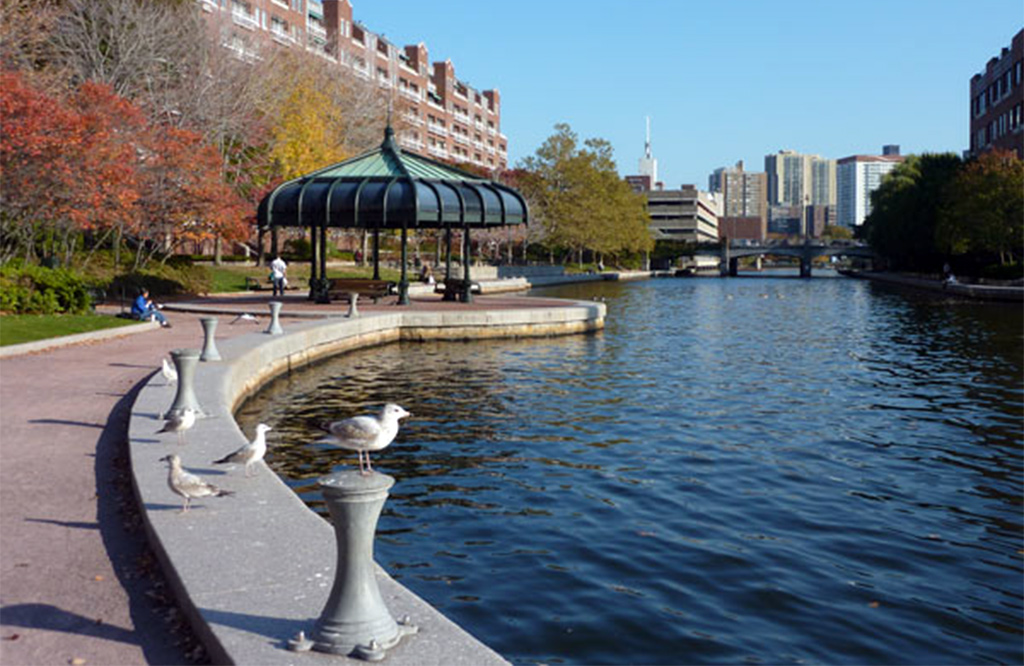 Why spoil the park’s historic furniture design with these jarring structures and materials? Residents at the Thomas Graves Landing condominiums, which look out on the park, were not even consulted, even though the incongruous changes would be effectively in our front yard, and even though we cofinance the park’s maintenance. The developer is treating this city-owned park as if it were its commercial property to be turned into a draw for its retail business and an entertainment center (an outdoor movie screen is pictured). Instead, what residents and visitors have enjoyed for nearly 50 years is a city-owned park, one abounding with wildlife including ducks, geese, gulls, terns, squirrels, rabbits and six blue jays in a single tree. Lechmere Canal Park is, with its historical features, rippling water and the mall’s night-lit cupolas, a sparkling jewel of Cambridge. Let’s preserve Johnson’s classic design for all who live in or visit our beloved city.

(Unknown to me at the time, Johnson died the day after this piece was written. And a landmarking petition for the park has been filed with Cambridge Historical Commission.)

Marlene Lundberg is a retired corporate credit analyst with 20 years of work in financial analysis in New York City. Before that, she taught English composition and literature at the secondary and college levels for five years. She is transplanted to Cambridge from a farm in northern Indiana, by way of New York.