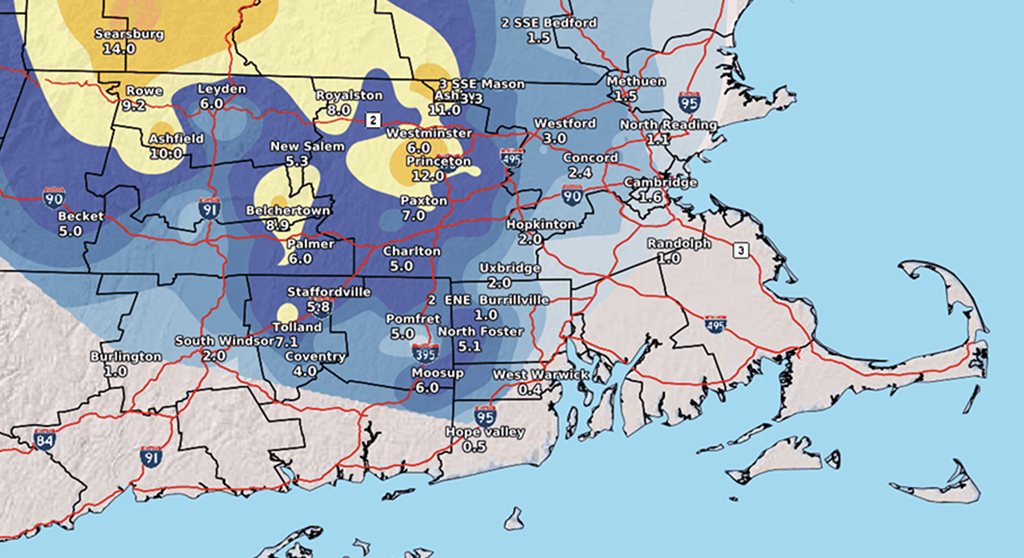 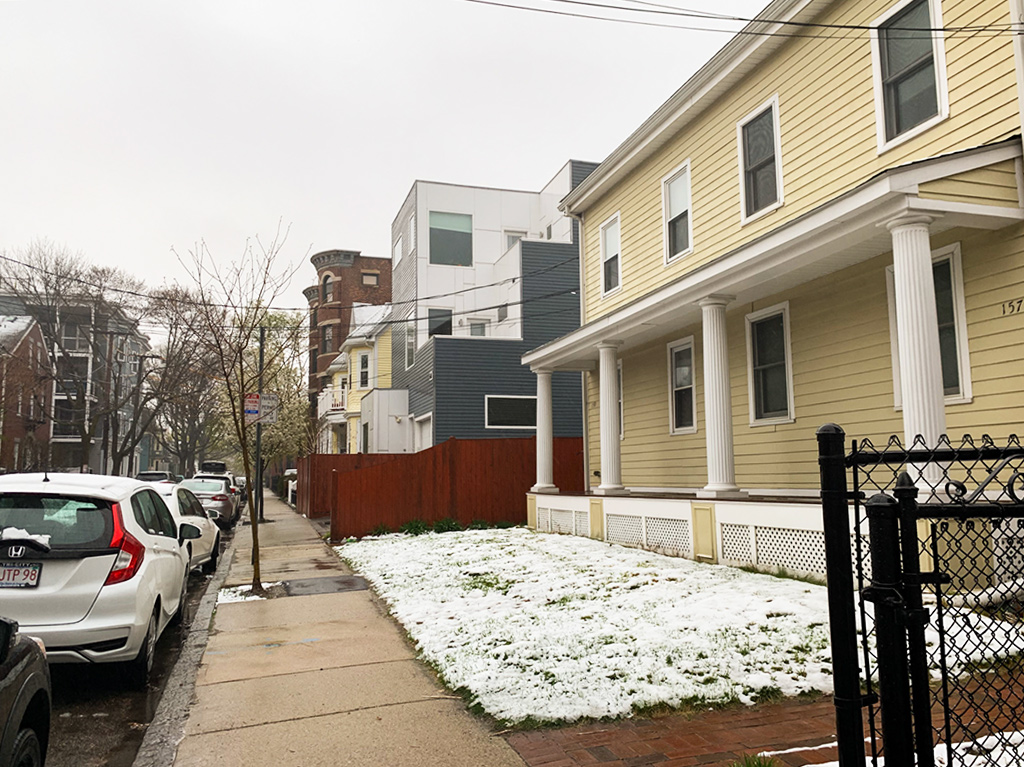 The petty storm sprung on us Friday – four days after city officials sealed up a 45-inch season with a $1.7 million request to cover plowing and salting – just highlights the uncertainty of living in a place where if you don’t like the weather, “just wait a few minutes.” What shouldn’t be uncertain about our snowfalls is knowing how much we get after we get it.

Because while every place on Earth has weather, not many have their own Department of Earth, Atmospheric and Planetary Sciences. Cambridge does. It’s at the Massachusetts Institute of Technology – where the meteorologists are so concerned with what’s happening all over the globe that they can’t take a moment to pay attention to what’s happening in their backyard.

If you did want to know how many inches of snow fell this week, the news media provide an unhelpfully random assortment of data. CBS Boston, for instance, looked at where totals were highest, and neither Boston nor Cambridge appeared on its rundown; even Boston.com, run out of The Boston Globe’s headquarters, similarly blew off its own Suffolk County and included only one town in Cambridge’s Middlesex County: Ashby, some 50 miles away. Not exactly helpful, though storms in the past have warranted Cambridge’s inclusion on lists of snowfall totals. We can’t rely on making those lists, though.

The curious could also turn to the National Weather Service, which relies on volunteer spotters to provide totals. After past storms, the closest snow totals found might be from Logan Airport, or from Lexington; a storm here or there might even bring a total from Somerville. But we seemed to get really lucky this time, with a report of 1.6 inches from a trained spotter right in town: 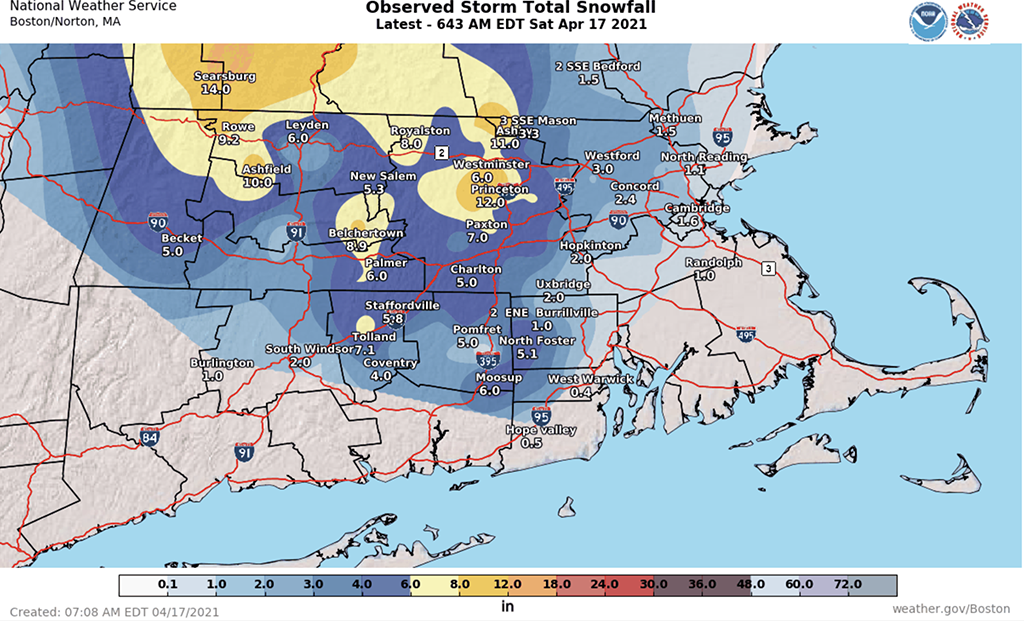 Cambridge is shown as getting 1.6 inches of snow Friday in one Saturday report from the National Weather Service. (Image: weather.gov)

Yet look elsewhere on weather.gov for the information and it, well, evaporates: 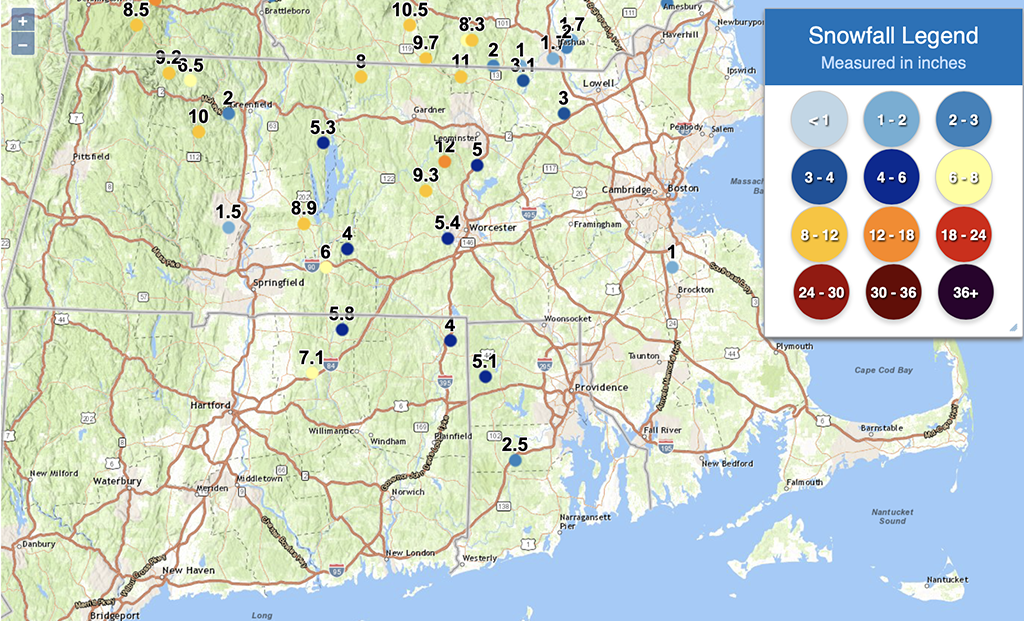 Cambridge snowfall from Friday is missing in a second Saturday report from the National Weather Service on the same day. (Image: weather.gov)

I approached the folks at MIT a year or two ago (it blurs) to note the oddity of having down the street an earth sciences division with meteorologists who can’t be bothered to send a student out with a ruler every time there’s snow to provide reliable, consistent reporting to the National Weather Service. The department could even post on its own website; it could even tweet the information out. But the response those many months ago was a polite “good idea” followed by inaction, and attempts to reach out Friday to officials at the institute and its earth sciences division brought no response.

It’s reminiscent of what happened around this time in 2018 (mercifully not related to snow): Pedro Reyes, an artist in residence at the MIT Center for Art, Science & Technology, brought his “Manufacturing Mischief: A Puppet Play” to the stage in collaboration with director Meghan Finn, writer Paul Hufker and Noam Chomsky, putting a puppet Chomsky into conversation with puppet Ayn Rand and other toys with deeply felt points of view. Cambridge, where this show was constructed over the course of a semester, got a whole two chances to see it, or would have if the shows hadn’t sold out immediately from largely within the school community. 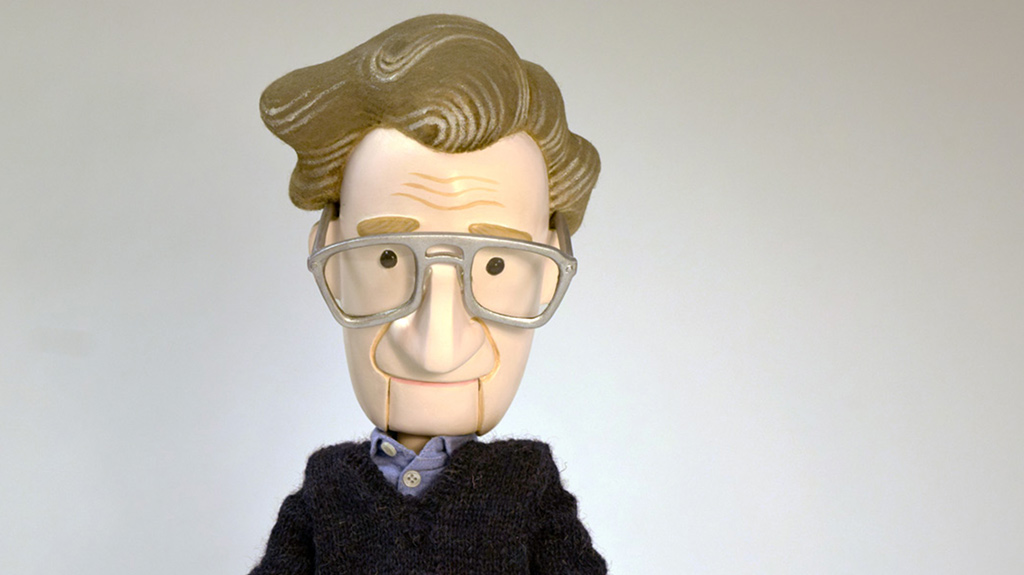 You know who didn’t get to see puppet Karl Marx rap “The Communist Manifesto” (rhyming “Tannenbaum” with “Amazon,” as noted by The New York Times)? Anyone else in Cambridge. While it came and went here, what the Times called “Chomsky’s longtime intellectual home,” Carnegie Mellon University in Pittsburgh got the show for three days – one more than we did – and it went to The Tank in New York City for a 19-day stretch of performances.

These are a couple of examples of how much Cambridge can seem like an afterthought (at best) to the academics who pass through, and even to those who are here for the long term as lecturers and residents.

Maybe by the next time snow falls in Cambridge – assuming that’s not tomorrow – the meteorologists and leadership at MIT’s Department of Earth, Atmospheric and Planetary Sciences will think about what it means to act locally while thinking globally, or just about how they could apply their skills to being a good neighbor.