What do ‘reparations’ mean for you? Forum asks Mondays throughout summer; Join and be heard

What do ‘reparations’ mean for you? Forum asks Mondays throughout summer; Join and be heard

City councillors E. Denise Simmons and Patty Nolan introduced an order June 21 for a reparations fund. When I attended the City Council meeting to speak and listen to public comments, a lot of confusion due to lack of clarity was apparent. People who spoke in support of the fund seemed to be unaware that it was a reparations fund; I have continued to have conversations with Cambridge residents, many of whom are shocked and completely unaware of this policy. This confusion is undoubtedly intentional.

“Many of color, the Black and brown community in particular, have been unfairly impacted by the war on drugs, particularly the war on drugs that pertains to marijuana, and that has not stopped. This is an opportunity to repair that damage, acknowledge that damage and make a way for the Black and brown community to heal and repair themselves, and as a community come forward,” Simmons said during the meeting.

I want to be clear: Simmons is correct. This city is complicit in the ongoing violence and dismantling of our Black communities as part of the war on drugs. All of our councillors owe us a public apology for their support toward racism. The war on drugs, in its 50th year anniversary as of 2021, is a racially motivated, federally sanctioned, state-backed and municipally enforced war. To quote former Richard Nixon domestic policy chief John Ehrlichman: “We knew we couldn’t make it illegal to be either against the war or black [people], but by getting the public to associate the hippies with marijuana and blacks with heroin and then criminalizing both heavily, we could disrupt those communities. We could arrest their leaders, raid their homes, break up their meetings and vilify them night after night on the evening news. Did we know we were lying about the drugs? Of course we did.”

I want to also be clear that the war on drugs disproportionately affects our Black and brown communities, but it affect white people too – addiction affects everyone. This is why our state’s economic empowerment program is open to white people as well as people of AAPI, African American, Hispanic or Latino descent. Essentially everyone regardless of ethnicity is within the program as long as they live in a certain city across the state. So it was shocking for me to read the reparations policy give reparations to “economic empowerment applicants and local Black-owned businesses.”

This policy is backed by a study sponsored by Revolutionary Clinics, which has sued our city three times for creating a priority period for economic empowerment applicants with cannabis licenses from our city. This is a policy on which I worked with city councillors literally line by line to ensure it would uphold legal requirements and that our city would not lose to a lawsuit nor be met with a federal investigation, unlike cities that created pay-to-play systems that led to corruption charges. Revolutionary Clinics is a wealthy, white male-owned cannabis business that flaunts its racism in the cannabis community and where a former employee has complained she was sexually assaulted by a member of senior management. My organization, the Massachusetts Recreational Consumer Council, kicked off a boycott against Revolutionary Clinics two years ago at the Democracy Center because of a disrespect toward women and racist actions toward our Black and brown communities. And our cannabis community stands to this day, largely in utter disgust against Revolutionary Clinics.

Revolutionary Clinics is also a part of a larger nonprofit, the Cannabis Dispensary Association. The CDA is also being boycotted for ongoing flagrant attacks against social equity, including threatening the state Cannabis Control Commission with a lawsuit for having a priority period for delivery licenses. Every business in the CDA has been blacklisted and banned from attending cannabis events in Massachusetts – with the exception of its own. This is a dirty group. And it has no business interjecting itself in race relations in Cambridge, never mind using the war on drugs as an insidious method to have white people obtain reparations. That’s right folks! Its study was used to back the language on the Cambridge reparations policy that allows our municipal cannabis tax funds to go toward everyone who is an economic empowerment applicant. These are people of all backgrounds living in 28 cities across the state. Shouldn’t municipal funds be kept for Cambridge residents?

And why Black-owned businesses? What about our Black disabled people? And our Black people that are retired? And Black people who don’t own a business and don’t want one? Why are Black lives recognized once again only through our labor? All Black Lives Matter. We deserve to be treated as whole human beings, and not workhorses for a capitalistic system. We matter and we are worthy, and we are tired. Black people need space to heal and rest. The influence of the “Big Canna” industry lobbying our city councillors is on full display, and I’m appalled.

I write to you today – no, I urge you, my fellow Cantabrigians – to stand your ground. We as a community must come together immediately: Reparations is a conversation to be held among us, the people and open to all Cambridge residents, and one in which black voices will be centered and heard, beginning 7 p.m. Monday. Please join us in community by registering at bit.ly/cambridgereparations. 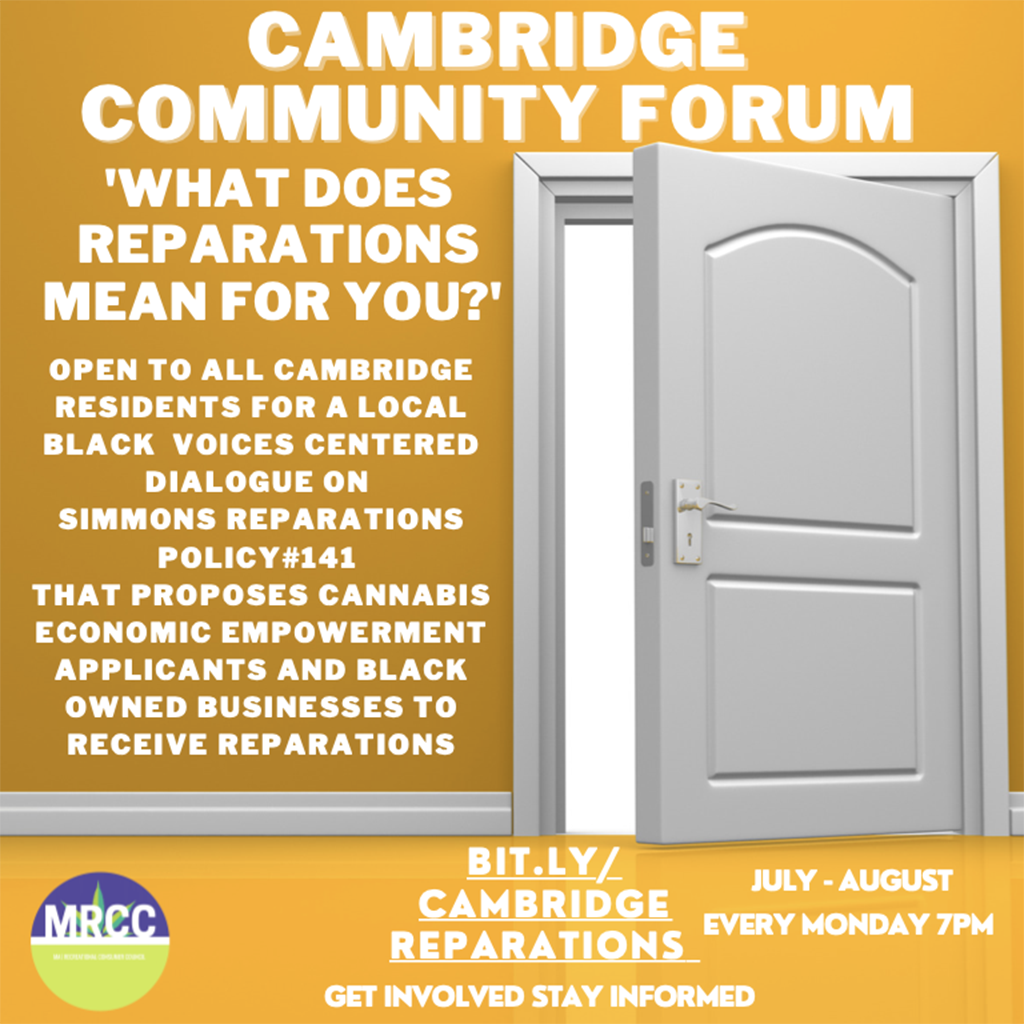 The Massachusetts Recreational Consumer Council is a BIPOC, woman- and queer-founded cooperatively run nonprofit that was established in 2017. In fact, it is the only lobbying organization in the state founded and operated in which equity is practiced through an intersectional lens. As leaders, we practice what we preach. I have been a resident of Cambridge for more than 15 years, have a child attending Cambridge Public Schools and am working to create systemic change for our communities through MRCC, which is an honor. The organization was birthed partially from Cambridge and Harvard – one of our co-founders is also a Harvard graduate – and is a reflection of our community. With our community we continue to stand.

If you would like to support MRCC’s fundraising efforts as we lead our citizen-led campaign for reparations, please go to www.massreccouncil.com/donate. Massachusetts has made more than $1 billion with zero funds going toward restorative justice; the racism we face makes advocacy work on behalf of our communities that much harder, and it is everyday donations from people such as you that help us achieve our mission. All donations will go in support of our restorative justice work.

Saskia VannJames is a lobbyist and board Member of the Massachusetts Recreational Consumer Council.