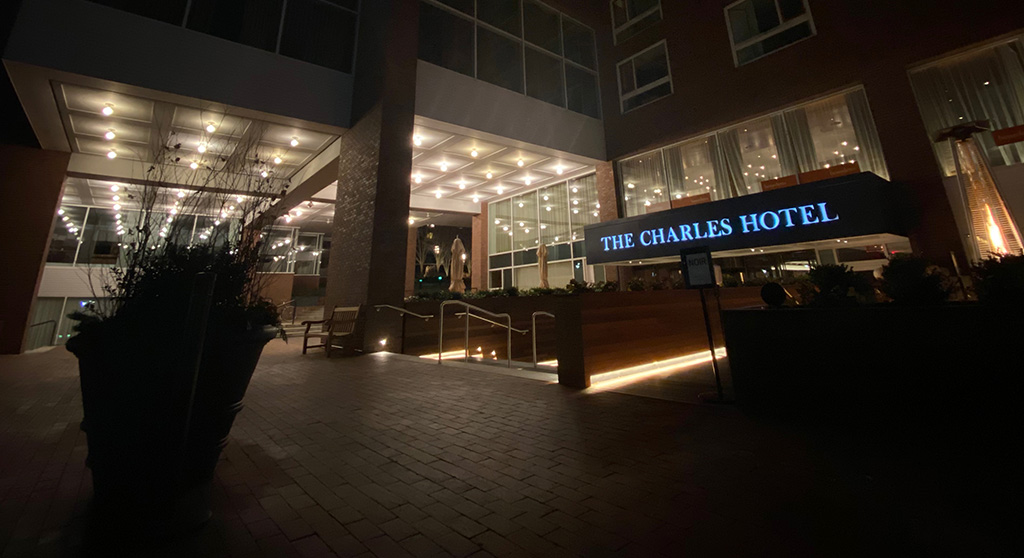 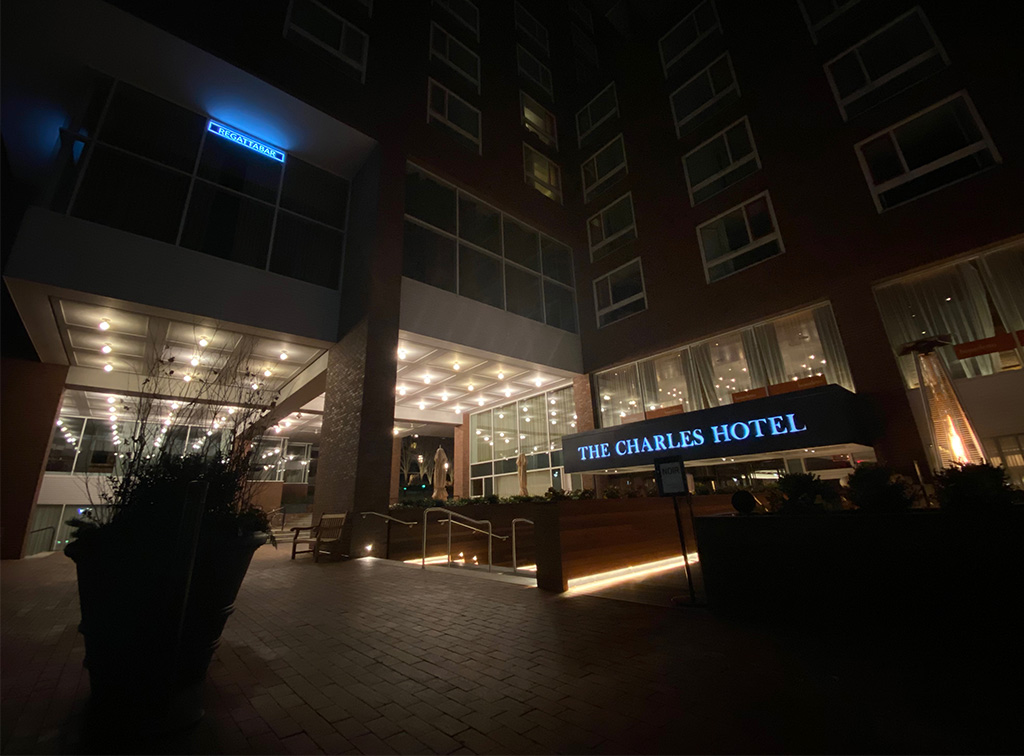 The plaza outside the Charles Hotel in Harvard Square is vacant and its Regattabar jazz club empty on a November night, eight months into the coronavirus pandemic. (Photo: Marc Levy)

A combined Boston-Cambridge Tourism Destination Marketing District was created Wednesday with a Boston City Council vote; Cambridge councillors had approved the idea June 7 with no opposition.

A push to create the district began two years ago, according to the Greater Boston Convention & Visitors Bureau, but now is counted on to repair damage to local tourism caused by the coronavirus pandemic. Martha Sheridan, president and chief executive of the bureau, said Covid-19 has taken 43 percent of jobs and more than $15 billion in revenue from what was into 2020 the third-largest industry in Massachusetts.

The district will let hotels in Cambridge and Boston assess its members a fee that will be reinvested into tourism efforts, similar to the approach taken in Central Square’s business improvement district. The joint tourism version will add a 1.5 percent surcharge to hotel rentals in the cities – expected to amount to anywhere between $4 and $300 per visit, depending where a customer stays and for how long – amounting to around $10 million in the first year to promote tourism in both cities, help beautify and maintain green and open spaces, increase supplier diversity and create a reserve fund to help the industry weather economic downturns, officials said in a Wednesday press release.

Some 62 percent of hotels with more than 50 rooms had to agree to the tourism district compact to get it enacted; the rate in both cities was closer to 70 percent, Mallon said.

The district has been talked about for a long time, considering that Greater Boston competes against cities such as San Francisco, Philadelphia, San Diego and Austin, Texas, which Mallon said are “out there doing these incredible marketing pushes to get people to come to their locations. This will make Boston and Cambridge really competitive …  It’s going to take a concerted effort to get people back here and choosing Cambridge and Boston as a destination for their vacations, but also for those big conferences that are where a lot of our hotels, restaurants and hospitality industry makes a majority of their money.”

Robyn Culbertson, executive director of the Cambridge Office for Tourism, who lobbied the hospitality industry to sign on, also negotiated that 3.3 percent of the fund be earmarked for her office specifically so “it wouldn’t just be this sort of little side thing – you know, ‘Come to Boston, but then also maybe go to Cambridge,’” Mallon said.

Siddiqui and Mallon traveled to Boston on Wednesday for a press conference with Boston city councilors that followed the vote locking in the district.

Boston city councilor Lydia Edwards, who led a revival of the languishing 2017 legislation to create the joint district, said it will be a “crucial part of a strong economic recovery.”

“The tourism industry and its employees have been some of the hardest hit during this pandemic,” Edwards said, noting that the industry “employs women and people of color at much higher rates than other industries, and is often a steppingstone for meaningful wages and union membership.”