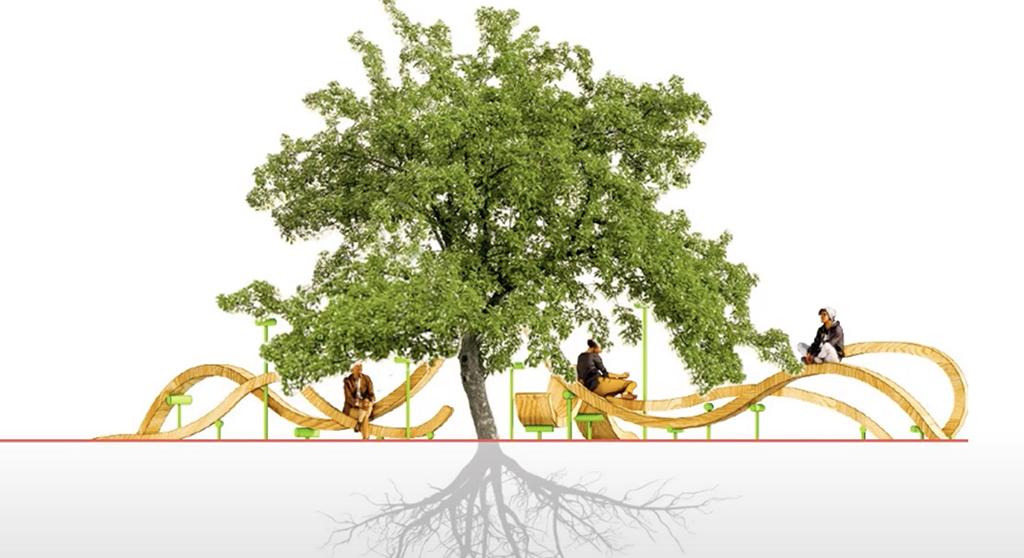 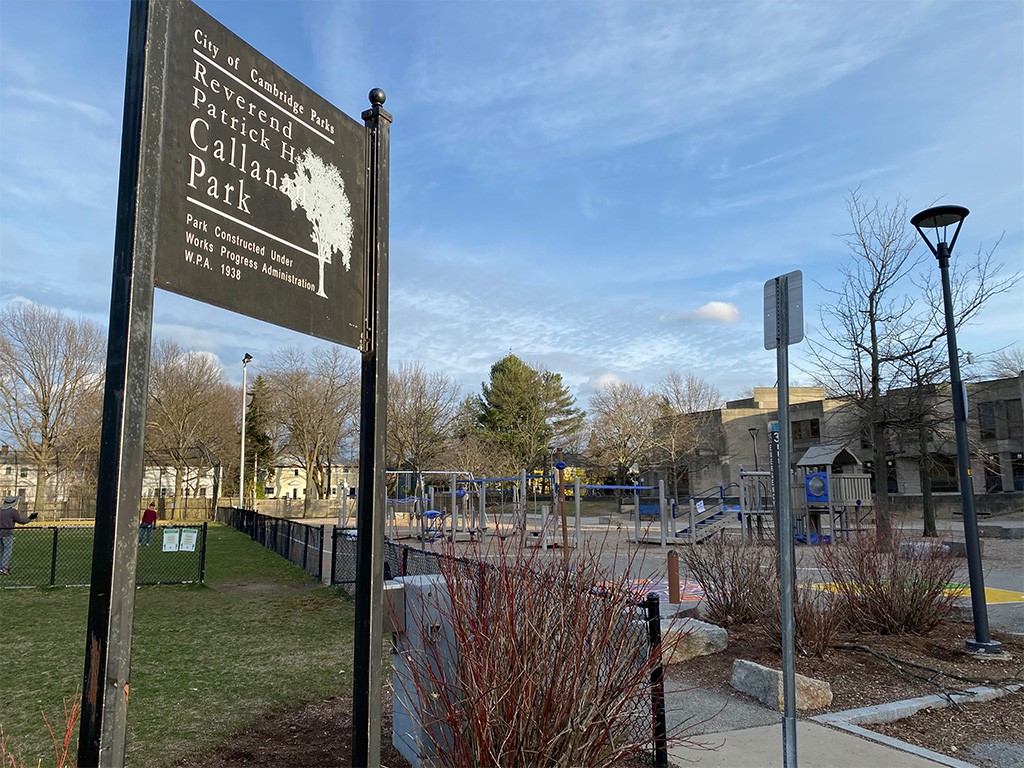 The Callanan Playground neighbors the Tobin Montessori and Vassal Lane Upper Schools and will be included as a site for public art. (Photo: Marc Levy)

Four finalist art proposals are in for the remaking of the Tobin Montessori and Vassal Lane Upper Schools in West Cambridge, but the winner of the $650,000 commission won’t be announced until November, the Cambridge Arts agency said in a Tuesday email.

Before that comes a Oct. 12 virtual meeting at which residents can ask questions of the artists – and potentially point a 20-person site committee in the direction of a community favorite.

A theme across the projects is the importance of trees on a site where the most significant trees are being removed for construction, and an effort to make up artistically for something being lost from the environment. Two firms propose fanciful versions of trees that will interact with rain. “One thing that we discovered by talking to students is that a favorite place is trees and how they are, in themselves, open-ended ways to learn and socialize,” said Melissa Mongiat of Daily tous les jours of Montreal. “That wasn’t just students but every person we had a conversation with who mentioned the trees and how they use them,” said her partner in the project, Kelsey Snook.

Gómez/Nava nodded to the loss of trees by suggesting that a large dodecahedron it would build out of steel “would perhaps replace the much-loved apple tree of the old school” because students could sit inside and stare up out of it. Similarly, The Urban Conga proposes an installation of twisting steel tubes “carved into the hill to reveal the wounds of the site” that, because the turns can be sat on, would serve a purpose “similar to the old apple tree that the students would hang out on.”

IKD’s proposal is wholly about trees, and that apple tree specifically (“our hope is that our project invites a range of impromptu activity similar to what the beloved apple tree inspired”), with cofounder Yugon Kim explaining that his firm has “long experience developing educational content around trees and timber construction, working with a number of institutions – the U.S. Forest Service, the USDA and timber industry leaders. Our hope is to educate people about the benefit of trees at every stage of his life and highlight its almost symbiotic relationship with living creatures.” The firm’s project requires the expertise of arborists to carry out.

But the first step to a decision is homework. Each of the public art teams made videos explaining their projects from around 15 minutes long to a little over 18 and covering everything from concept to materials to the installation timeline. Spending the time to watch might be essential, because the teams’ explanatory statements tend toward the abstract in a way that’s often useless to the lay person: “a canopy with sculptural seating plays with water” in one description; another refers to “sculptural works that reference the architect’s design organization, where the interior areas are connected to the elements.” Shrug.

The videos are on Cambridge Arts’ feedback page for the project, along with links to send written feedback and attend the October meeting. Here’s a quick sense of what each project will look and feel like at the 197 Vassal Lane site, as best as could be gleaned from the videos. 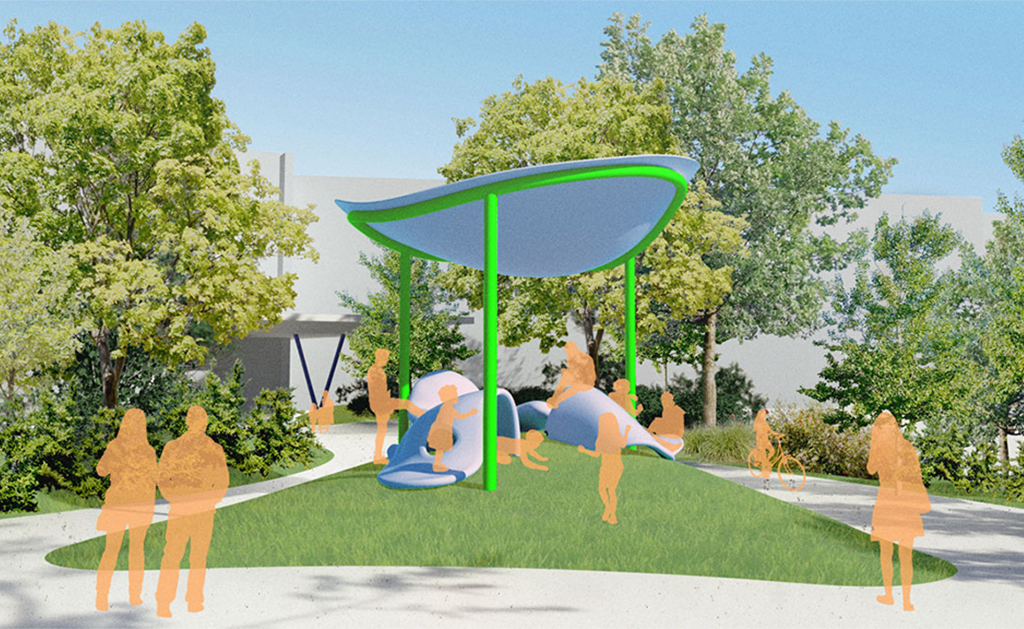 This firm out of Montreal and Portland, Oregon, proposes to build molded, organic-looking seating below a similarly eccentric disc designed to offer shade in sunshine or capture water and snowfall. The water will stream down in at least one location where it can be played with by the people below and make its way harmlessly through carveouts in the sculpted seating. The Dish won’t flood; excess water it gathers will be funneled imperceptibly through one of The Dish’s three legs to a giant stormwater storage tank being installed on the site. 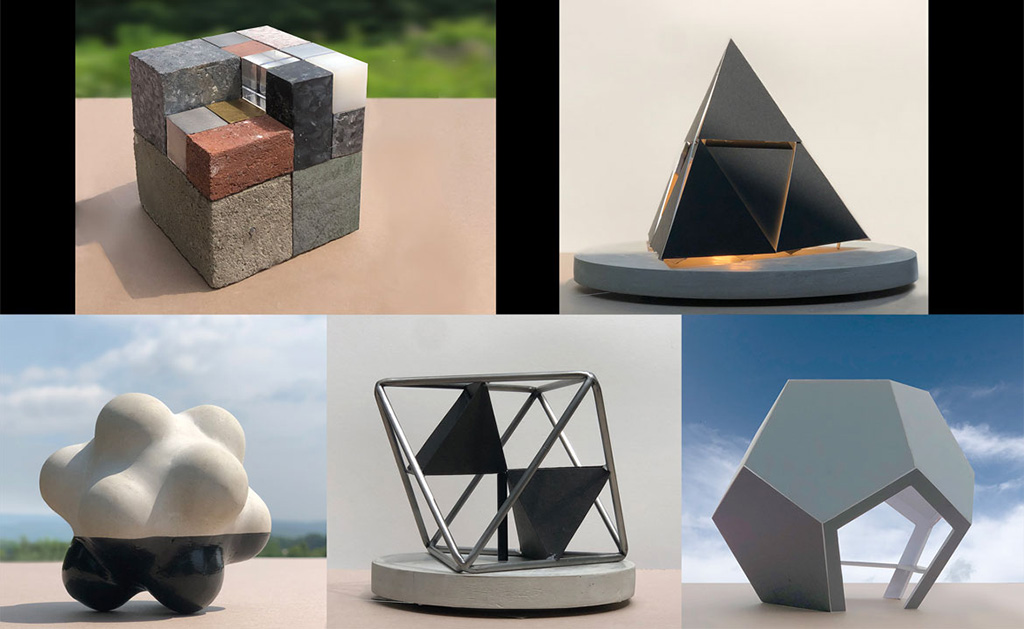 Gregory Gómez of Newtonville and Rodrigo Nava of Putney, Vermont, propose to install five sculptures in different materials, including a cube representing earth and itself made up of smaller blocks in a variety of materials; an icosahedron made of two shades of granite representing water (the materials change where climate change is expected to raise sea levels); and a steel dodecahedron representing the universe. Two of the sculptures will be interactive: a stainless steel octahedron representing air that can be rotated to plunk out the song “The Earth, The Air, The Fire, The Water, Return” at a speed that depends how quickly the sculpture is pushed; and an aluminum tetrahedron representing fire that can be spun around on its granite plinth – and the faster it’s spun, the brighter the LED lights beneath will glow. The sculptures might be placed along a path defined by the swirl of a Fibonacci sequence in coordination with landscapers, and the placement and the art itself is meant to be used by math and science teachers as examples of principles they’ll talk about in class. 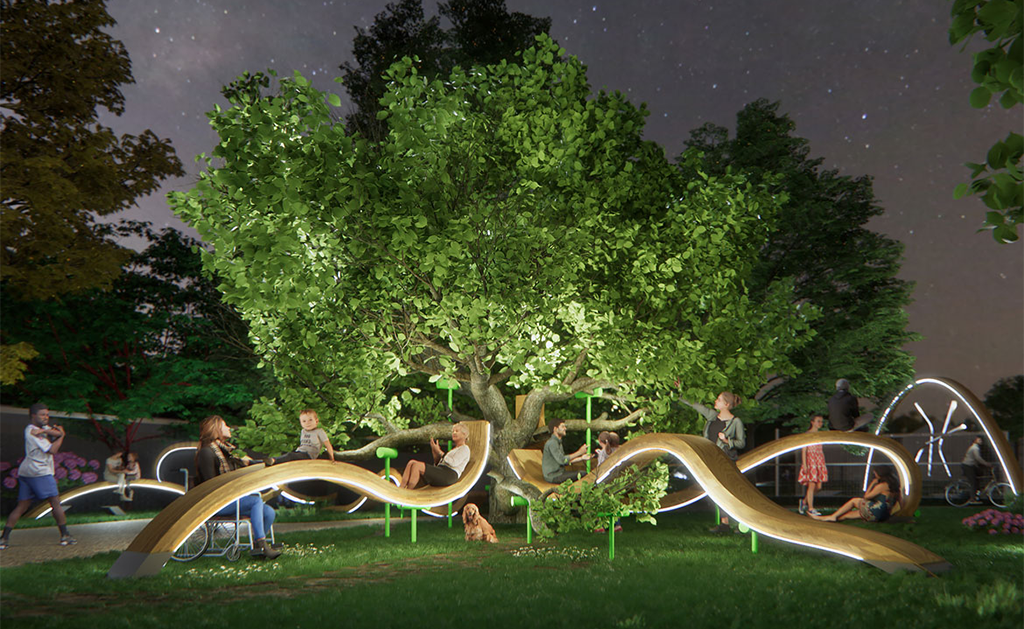 Cofounder Tomomi Itakura is in San Francisco, but Kim lives in Cambridge – in fact, only eight blocks from the schools. “I have a truly vested interest in the community growth of Cambridge,” Kim said, and IKD’s project makes that literal: It intends to make up for the loss of the campus apple tree by taking 25 to 100 cuttings and literally regrowing the tree by grafting them onto other trees on the site – a process that involves students and others in the community nurturing the plants for years at their own homes. “If all goes to plan, families would host the trees until earlier the same year as the reopening of the school” in 2025, Kim said, with some other trees going to less affluent and green parts of Cambridge. In addition, the firm wants to make playful structures out of lumber taken from five large, old-growth pin oak trees taken from the site, including a playscape with slidelike portions that mimic tree roots. These will be placed at the new, grafted apple trees. “Our hope is that over time, while the tree canopy provides needed shade to its users, there will be a blurring of what is art and what is nature,” with the pin oak sections and their LED lights being removed when the trees are eventually strong enough to be played on, Kim said. “We liken this multiyear process to being similar to what it’s like for educators and parents raising children to become strong, self-sufficient and eventually independent.” The scope of the timeline is epic, looking to the pin oak playscape being removed between 2041 and 2051 and true tree independence being reached a century from now. 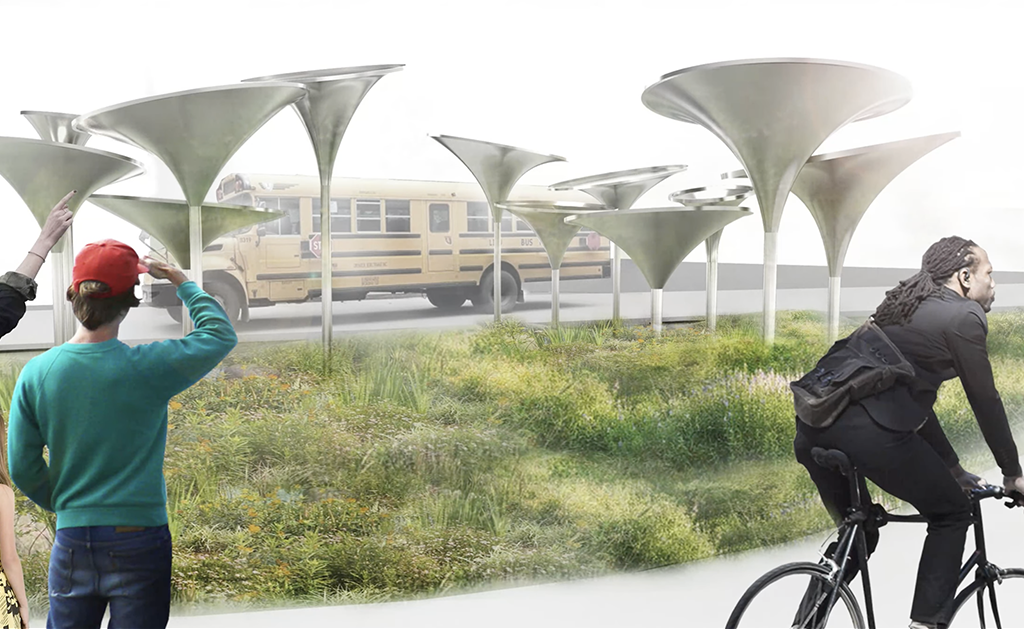 The Urban Conga of Brooklyn, New York, envisions a project broken into time elements. Reflecting on the past, placed on the hillside by the baseball field, is represented by those shiny, undulating (and reflecting) stainless steel tubes where people can sit and talk, making them “a place to gather and discuss the past in order to choose the right path forward.” In the present, poems are placed on plaques around the school campuses in installations (also with seating areas) designed by the community by piecing together components like playing with a Lego set. The future is within a lawn surrounded by the loop of road to be used by buses and consists of giant cupped steel sculptures from 7 to 15 feet high that resemble the flowers known as angel’s trumpet, except facing the sky instead of drooping – so they capture rainwater. “As each unit fills up, they pour slowly down into each other and then back into the ground. The piece becomes an ode for celebrating the future systems and steps Cambridge is taking toward a more resilient future,” a group presenter said.