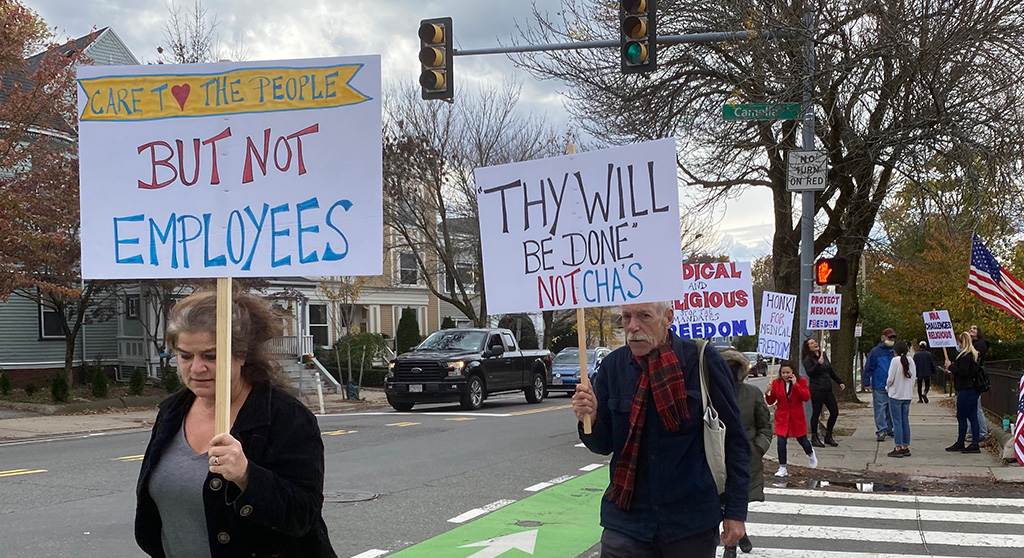 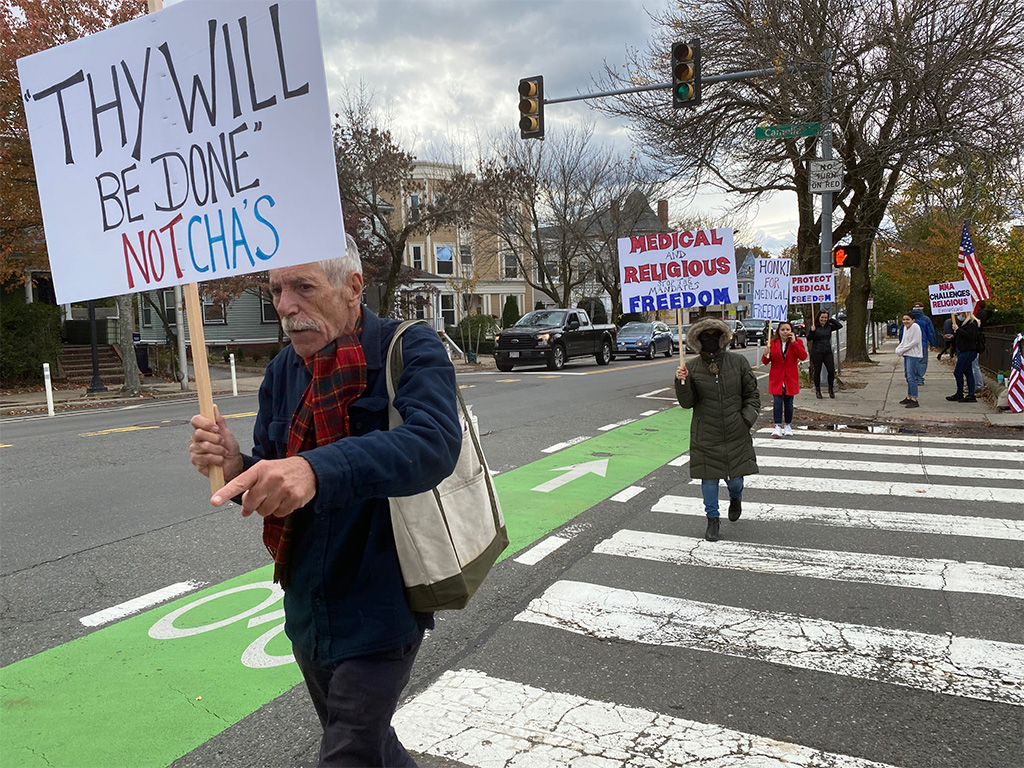 A small group of Cambridge Health Alliance employees who face termination because they refuse to get vaccinated against Covid-19 after losing their bids for religious and medical exemptions carried protest signs outside CHA Cambridge Hospital on Tuesday. The reaction to the demonstration ranged from sporadic honks of support for the protesters to a patient on his way into the building who exclaimed: “This is crazy! I don’t want them working here if they aren’t vaccinated.”

Others who disagreed with the protesters, who declined to give their names, were quieter. “I believe in the vaccine,” said a woman who said she works as an emergency room medical assistant. “I’ve seen my share of people dying from Covid.” Still, she said she regretted that employees were losing their jobs.

A man with two elderly relatives, all three CHA patients, said: “I think it’s important to get vaccinated if you work in a hospital … It’s important to not give Covid” to patients and other workers.

Another CHA employee said he had been vaccinated and does not object to vaccines but remarked that he didn’t agree with “pressure” from higher-ups to accept the Covid-19 shots, particularly if employees hadn’t known about the requirement before they agreed to take the job.

This man also had strong religious beliefs – he said he believed that god would protect him from the virus – but said that didn’t interfere with his accepting the vaccine.

According to CHA spokesperson David Cecere, 99 percent of the Alliance’s workforce of almost 5,000 people is fully vaccinated against Covid.

The protesters, who were joined by family members and supporters, say that CHA unfairly denied them medical and religious exemptions. Deborah Race, an information technology employee who wrote a letter of complaint to CHA chief executive Assaad Sayah on Thursday on behalf of 36 employees whose applications for exemptions were denied, said that as a Pentecostal church member, she didn’t want Covid vaccines because fetal tissue from abortions played a part in their development, however distant.

The president of the National Association of Evangelicals has supported Covid-19 vaccination; leaders of some individual evangelical churches have spoken against it.

The patient who denounced CHA staff refusing to be vaccinated, Zev Michelson, 70, said: “There’s no religious body that objects to vaccination.” He said he didn’t want to be treated by unvaccinated health care workers.

Some of the protesters said they rejected not only to Covid-19 vaccination, but other mandates, such as the requirement to wear masks indoors. Race and another demonstrator said there was no evidence that masks prevented infection, contrary to scientific findings. Race said she was nevertheless willing to wear a mask “out of respect” for others. After this story was published, Race said in an email that she had been discussing mask-wearing outdoors. She said she had referred to cloth masks and others worn by the public as not protective because they trap large droplets and not aerosols, or are not fitted properly.