North Cambridge was home to a Camp Cameron during the Civil War; tour its Gold Star memorials 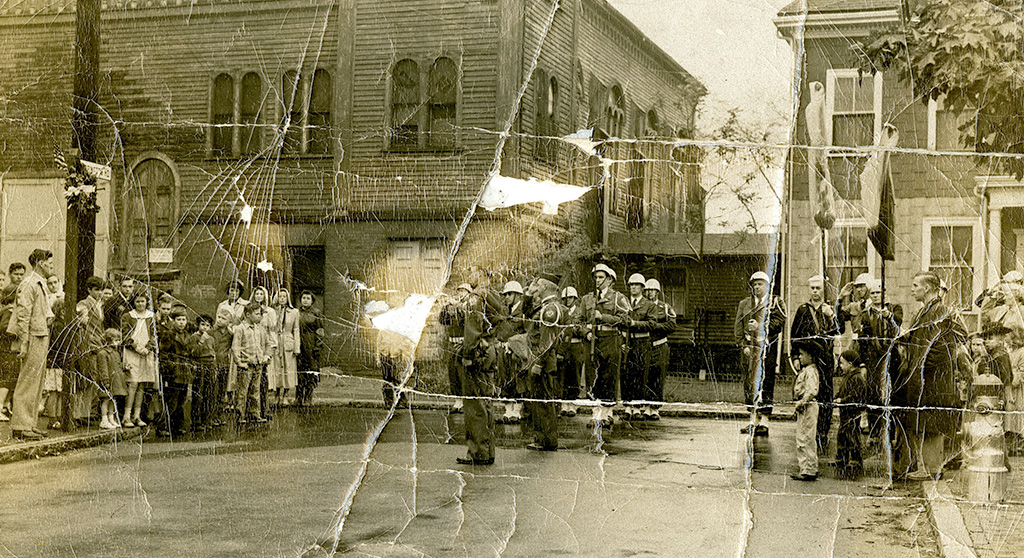 North Cambridge was home to a Camp Cameron during the Civil War; tour its Gold Star memorials

Veterans Day is an appropriate time to pay homage to the role North Cambridge and its residents have played in the military history of Massachusetts and the United States. There are nine memorial pole and dedication markers commemorating Gold Star service members in the area bounded by Rindge Avenue, the Somerville border and Alewife Brook Parkway. In addition, a number of streets and squares have been named or renamed to commemorate people and events going back to the Revolutionary War. 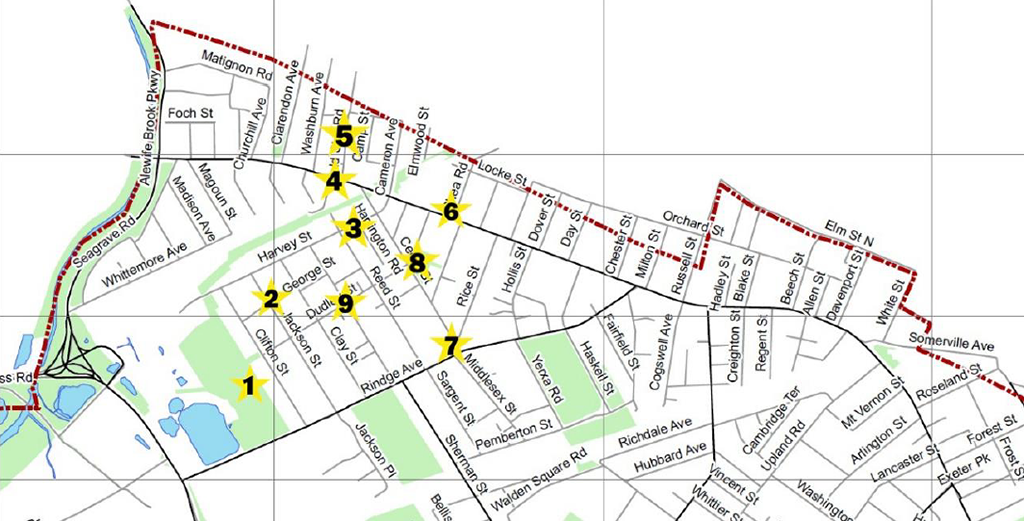 The location of Gold Star Memorials in this part of North Cambridge. (Image: Cambridge GIS)

U.S. service members from World War I, World War II and Vietnam are represented. You can visit all markers in an hour’s walk through the neighborhood.

5. Morrison Place Designated in honor of U.S. Air Force Tech. Sgt. Robert J. Morrison, killed in action Sept. 17, 1944, in the South China Sea. Morrison Place is at Gold Star Road and Morrison Court. Morrison Court, however, was not itself named after Robert Morrison; it is listed in the Cambridge Directory for 1911 in that location with that name.

6. Shea Road Renamed from Frank Street in honor of U.S. Navy Lt. Cmdr. John J. Shea, who was missing in action in 1942 when the USS Wasp was torpedoed. Shea was declared dead the next year; the remains of the ship were not discovered until 2019. (See the link for the exciting story of the discovery of the Wasp.) 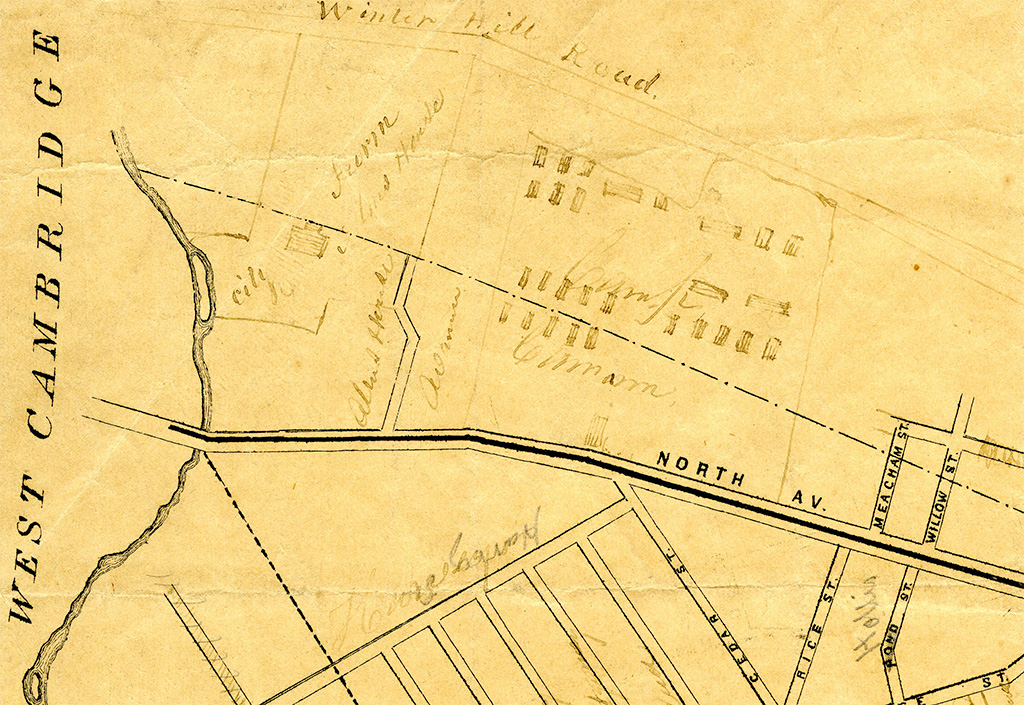 A detail of Camp Cameron from Russell’s Horse Railroad Guide for Boston and Vicinity, May 1862.

In addition to these Gold Star Dedication Markers, a number of other streets were named or renamed for their military associations.

During the Civil War, North Cambridge was home to Camp Cameron – the barracks and encampment for the First Regiment of the Massachusetts Volunteer Militia, where recruits were housed and trained from 1861 to 1862. The camp extended for 140 acres, bounded by what is now Massachusetts Avenue, Clarendon Avenue and Shea Road, extending up to what is now Holland Street in Somerville. It occupied the site of the present trolley bus barns and the large Northview Condominiums building at 2353 Massachusetts Ave. The camp was named for Simon Cameron, President Lincoln’s secretary of war at the time, and Cameron Avenue was named for the camp. 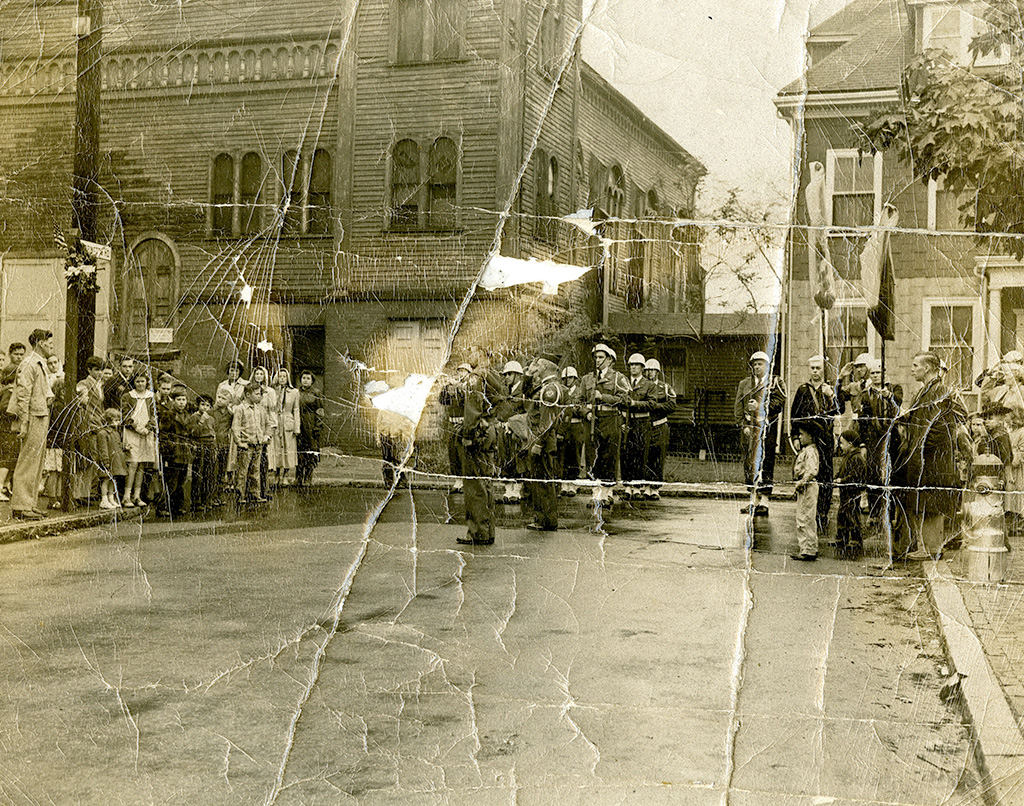 A military event on Harrington Road in the 1940s. (Photo: Cambridge Historical Commission)

After the war, the site of the camp was subdivided and John C. Stiles laid out three streets: John, Camp and Stiles. The land was subsequently bought by C.A. Mason, who laid out new streets and renamed others in commemoration of battles in which Massachusetts regiments had fought:

Other streets that were renamed include

We engage with our city to explore how the past influences the present to shape a better future. We strive to be the most relevant and responsive historical voice in Cambridge. We do that by recognizing that every person in our city knows something about Cambridge’s history, and that knowledge matters. We support people in sharing history – and weaving their knowledge together – by offering them the floor, the mic, the platform. We shed light where historical perspectives are needed. We listen to our community. We live by the ideal that history belongs to everyone.