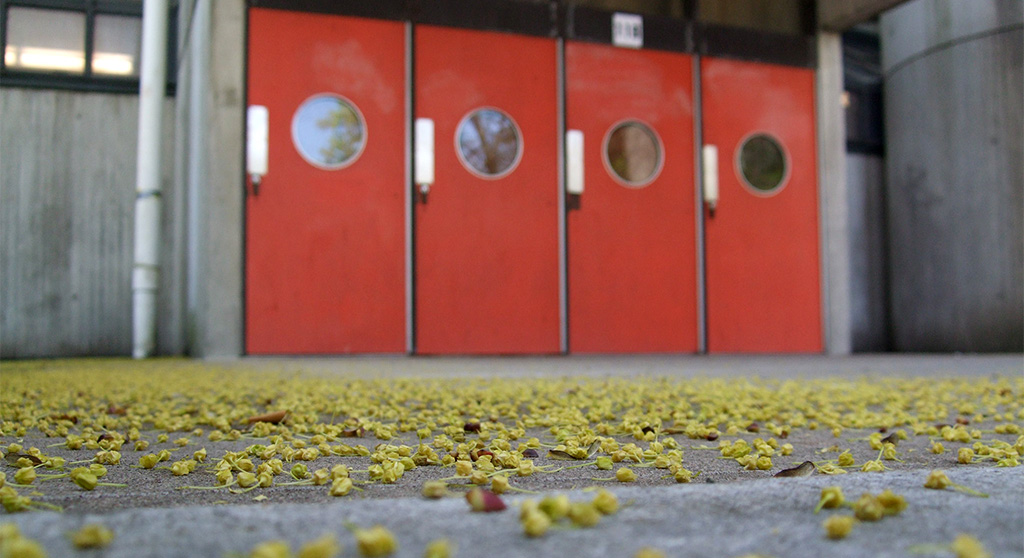 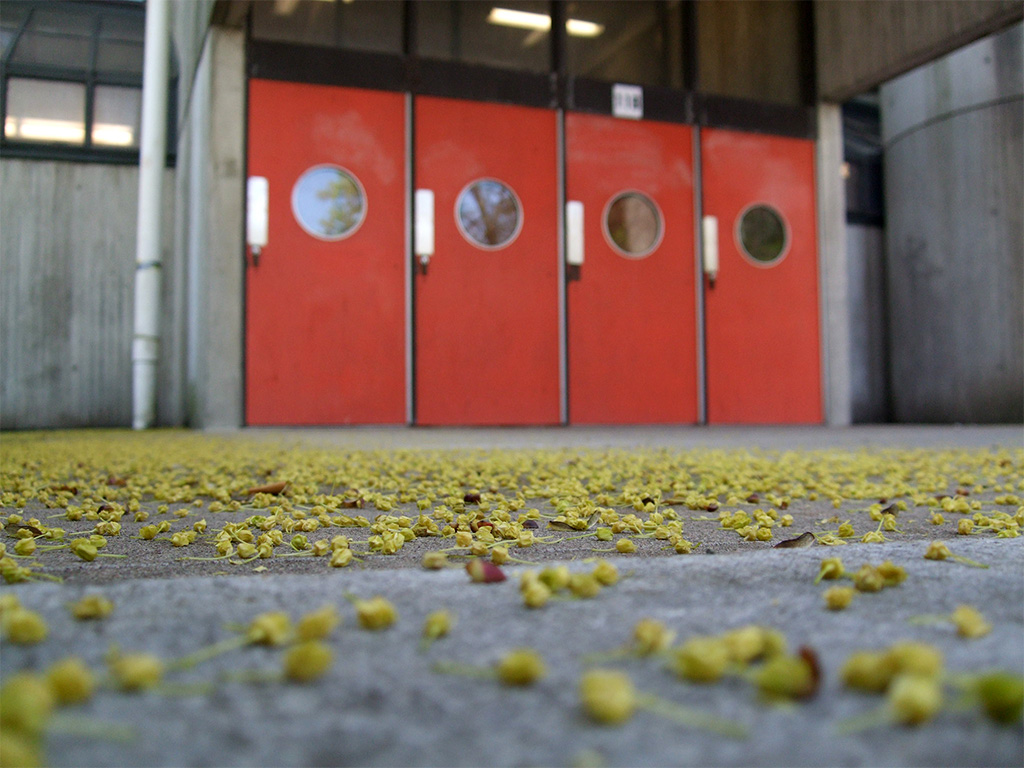 The doors of Cambridge Rindge and Latin School. (Photo: Molly Marshall via Flickr)

In the shadow of a 450-student walkout protesting a culture of sexual assaults and harassment and the school year’s third student death, the city’s latest teen health survey was examined Tuesday by the School Committee’s School Climate Subcommittee. Some of the highlights that rattled participants included a “historic” level of mental health struggle among kids and thoughts of suicide over the past months.

Some of the troubling survey findings:

The survey also had a couple of bright spots:

It was the first year high schoolers and middle schoolers were grouped in a survey, the first time students had a say in what questions were asked and the first year the survey was done online, but the numbers of respondents dropped nonetheless, said Jamie McCarthy, the district’s K-12 curriculum coordinator for health, PE and wellness. “Participation was lower than we had hoped,” to about 3,000 students taking part across the middle and upper schools, or about 55 percent of high school students and about 75 percent of upper school students, McCarthy told officials in Tuesday’s virtual meeting.

Despite that, the survey’s findings were similar to those from a Youth Risk Behavior Survey taken in school districts across the country, McCarthy said.

Struggles with mental health rose with students’ age, the survey showed – in fact, younger kids reported taking fewer meds and seeing therapists and school counselors less, while the opposite was true for older kids – but added up to what McCarthy called a “historic” surge in students reporting feeling sad or hopeless almost every day for two or more weeks in a row – topping a list of things that caused them stress that in the past had always been led by school itself and academic performance, followed by such issues of social justice, physical appearance and then social issues. Mental health struggles were felt most acutely by genderqueer students, 65 percent of whom answered in the survey that they had struggled in the past 30 days.

Though the survey was anonymous, at the suggestion of students it included a pop-up that appeared to respondents who said they’d considered suicide. It included phone numbers for help and a chance for kids to identify themselves. “A number of students did put their names,” McCarthy said.

Still, while “overall mental health worsened during the pandemic,” McCarthy said, “there was a decrease in reported self-harm.”

Considering other factors – including that more than 1 in 5 students, or 22 percent, reported that a family member or close friend had died in the past 12 months – “our young people are clearly struggling,” said Rachel Weinstein, co-chair of the committee. “Whether it’s grief of loss of life, suicidality, identity development and being accepted, there’s a lot happening here and there’s a lot of work for us all to do.” 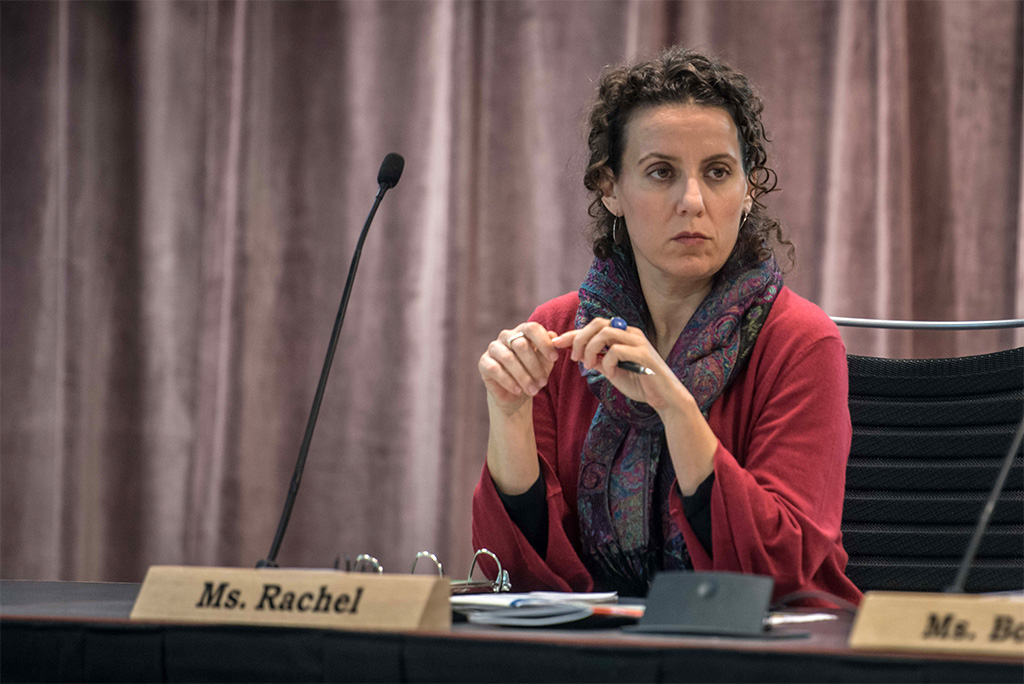 The district is looking for someone to coordinate a social-emotional learning response that will include community partners, deputy assistant superintendent Carolyn Turk said, and even urged people at the meeting to send her names of people who could take on the role. “We have to remember that we are not an organization with the greatest expertise in delivering a medical or health plan. We need to partner with people that do have that expertise,” Turk said. “We are in the process of trying to identify someone who will be able to coordinate the many services.”

There were things that could be done within the school, committee student members Anais Killian and Nuriel Vera-Degraff said.

The students touched on school health programming over the years, starting with every second-, third- and fifth-grader getting health education on a weekly basis for at least a semester to a high schooler needing five health credits to graduate. McCarthy, running through the requirements at the students’ request, acknowledged that “the high school is our biggest need in terms of improvement,” where a teen might get health education for one day a week for one semester in ninth grade.

“If students play a sport in grades 10 through 12, they do not have to take health within those grades. And so students may not hear about consent or even hear the word consent for that period of time, which is really concerning,” Killian said.

A wellness teacher in the district, Michael O’Connell, summed up the approach in health curriculum overall: “We are promoting, strangely, a culture that says that is not very important.”

Damon Smith, principal at the Cambridge Rindge and Latin high school, outlined a few ways “we’re not waiting” when it comes to health issues, especially after the death of student Salman Almarzooqi on Nov. 24 – the previous student death this school year was a suicide – and Tuesday’s walkout. The district had added social workers, developed a “building resilience for youth in transition” program and expanded opportunities in extracurriculars. “Yet we still have the results that we see in our Teen Health Survey,” Smith said. “I think the programmatic-village kind of response is something that we need. There can never be enough ways that we can support our scholars.”

The subcommittee hoped to get an update Tuesday on requests by students that included things relating to the walkout: having adult-facilitated conversations about sexual assault and harassment and improving incident-reporting policies around those crimes; and ensuring that all-ninth graders are educated around issues of consent. In addition, members are considering an update to the wellness waiver policy for athletes; including mental health in wellness curricula; and having a meeting dedicated to issues faced by genderqueer or LGBTQIA+ students – and possibly one on upper school students.

“And we’re not even talking about violence and substance abuse and other crises that are on fire right now,” Weinstein said.