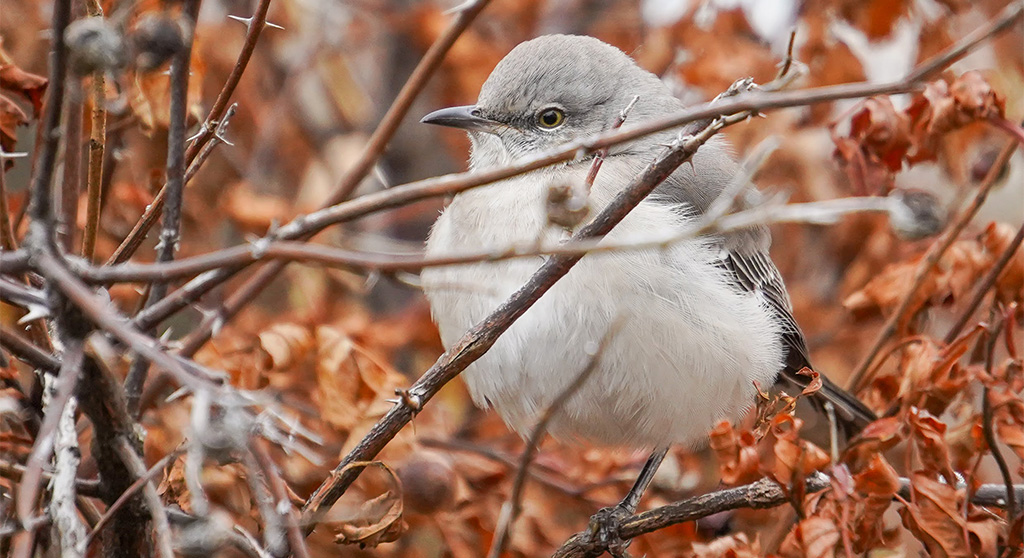 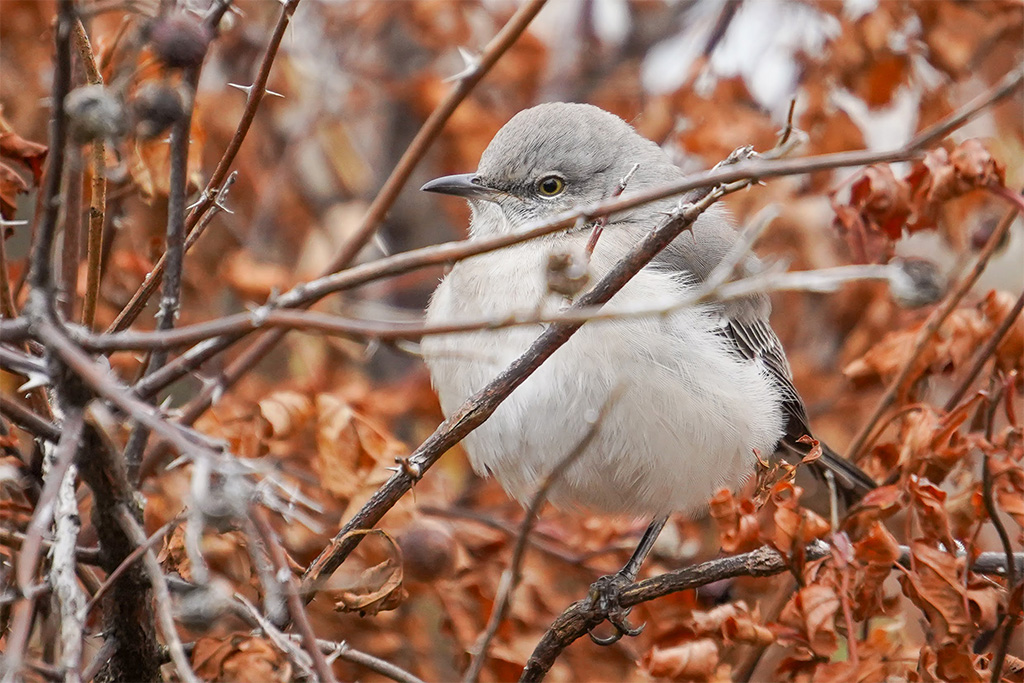 A northern mockingbird rests in a thicket in Somerville in November 2020. (Photo: Jeanine Farley)

What person has not seen or heard a mockingbird? These adept mimics can imitate many sounds. That car alarm you hear – maybe it’s a mockingbird? That blue jay – maybe it is? That whistle? You get the idea. Mockingbirds can imitate 40 or more bird sounds, as well as barking dogs, creaking doors, cellphones or human whistlers. Each bird learns sounds throughout its life, increasing its repertoire the older it gets. A mockingbird’s song is a series of sounds. The first is repeated two to six times, then the second is repeated and so on for 20 seconds or more.

He improves upon most of the notes that he reproduces, adding also to his varied repertoire the crowing of chanticleer, the cackling of the hen, the barking of the house dog, the squeaking of the unoiled wheelbarrow, the postman’s whistle, the plaints of young chickens and turkeys and those of young wild birds, not neglecting to mimic his own offspring. He even imitates man’s musical inventions.

Forbush went on to report that one mockingbird in the Arnold Arboretum could imitate “39 bird songs, 50 bird calls and the notes of a frog and a cricket.”

Male mockingbirds sing to attract females. The greater a bird’s repertoire, the greater its chances of attracting a mate. The mockingbird’s singing behavior peaks during breeding season, which is late spring or early summer. Mockingbirds have two broods of chicks each season. 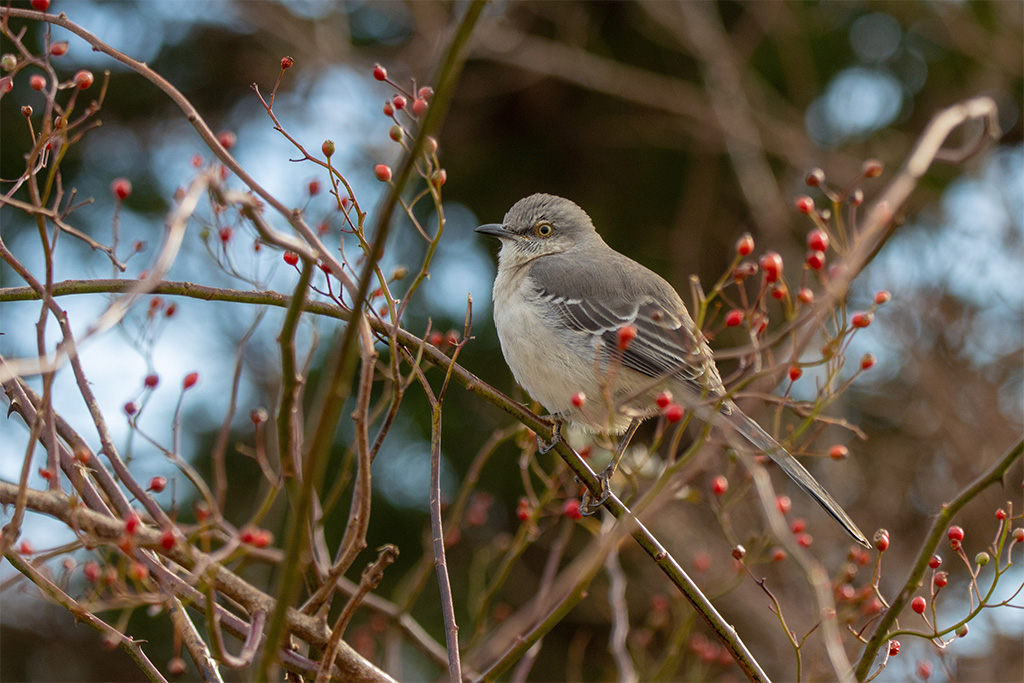 A northern mockingbird alights near a supply of winter berries. (Photo: Richard George)

The Northern mockingbird was originally a southern bird, but its range has expanded north as far as Canada. Because of the caged-bird trade in the 1700s and 1800s, its numbers were low in Massachusetts until the 1900s.

During the 1700s and 1800s, rural men and children trapped native songbirds to peddle in city marketplaces. People from all walks of life kept these wild songbirds as caged pets. Until the early 1900s, birds were the most popular indoor pet in the United States. The most popular birds were goldfinches, cardinals and mockingbirds, but many other birds were kept as well. 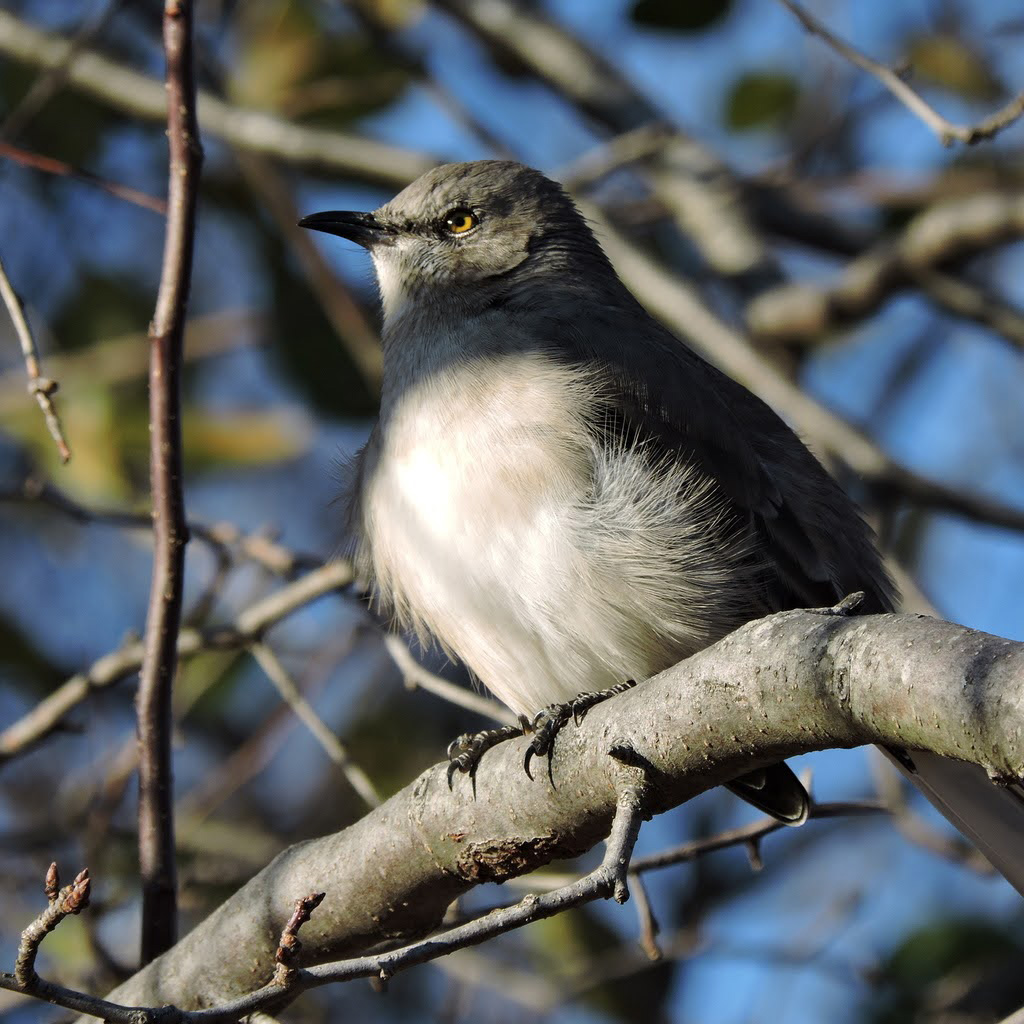 Because of this relentless trapping and shooting, many native songbirds became threatened with extinction. To prevent extinction, state and federal governments in the early 1900s passed laws prohibiting the capture, killing or selling of native American birds. Tropical birds were excluded from this law, so people today can keep canaries and parakeets and parrots without becoming outlaws. While we’re much more likely to have pet dogs or pet cats than pet birds today, pet birds were once wildly popular – and the first commercial pet food in the United States was bird food.

In 1772, Thomas Jefferson bought for 5 shillings his first mockingbird from an enslaved worker (whose name I cannot find) of his father-in-law. Jefferson went on to own at least four mockingbirds. His favorite was named Dick. Jefferson kept Dick in his study, and when Jefferson played the violin, Dick would sing along.

Among his roses and geraniums was suspended the cage of his favorite mocking-bird, which he cherished with peculiar fondness, not only for its melodious powers, but for its uncommon intelligence and affectionate disposition. . . . It was the constant companion of his solitary and studious hours. Whenever he was alone he opened the cage and let the bird fly about the room. After flitting for a while from one object to another, it would alight on his table and regale him with its sweetest notes, or perch on his shoulder and take its food from his lips. Often when he retired to his chamber it would hop up the stairs after him and while he took his siesta, would sit on his couch and pour forth its melodious strains. How he loved this bird!

Jefferson is also said to have taken a mockingbird with him to France in 1784. After the bird arrived in France, it interspersed its songs with imitations of the creaking timbers of the ship it had sailed on.

In 1929, Edward Howe Forbush wrote, “The severe winters of New England are likely to hold [the mockingbird] in check, and prevent it from becoming common here.” Forbush was wrong: Because of the introduction of the invasive multiflora rose, northern mockingbirds soon found plenty of winter food, and they became common all over Massachusetts, especially in the eastern part of the state. 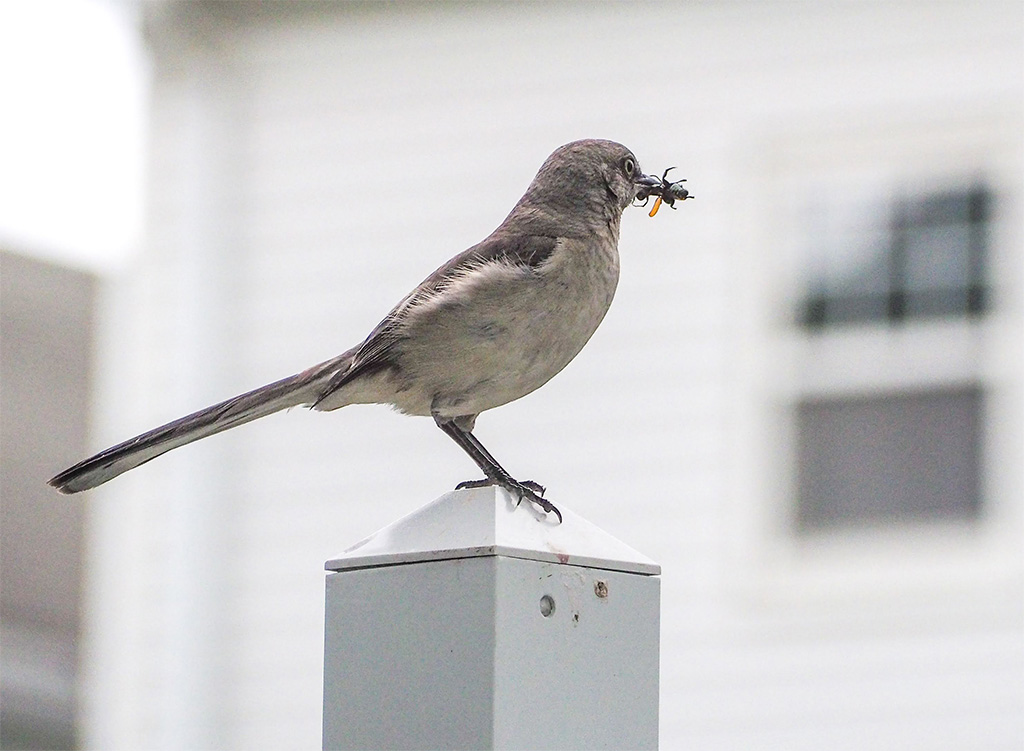 A northern mockingbird captures an insect for its youngsters in a nearby nest in Somerville in July 2020. (Photo: Jeanine Farley)

In 1866, growers in the rose industry introduced the Japanese multiflora rose (also known today as the rambling rose) to the eastern United States. It was promoted as food for wildlife and game birds, as a living fence to corral livestock and as an erosion control and snow barrier. States passed out rooted cuttings for farmers to plant as cover for game birds and as food for songbirds. Later, highway department workers planted mulitflora rosebushes along highway medians to stop cars from crossing into the oncoming lanes. Soon this aggressive plant was everywhere.

This rose has white flowers and red fruit, called rose hips. It can grow to more than 10 feet and forms dense, impenetrable thickets up to 33 feet in diameter that prevent other vegetation from growing. This rose spreads rapidly because it can produce 500,000 seeds per year, and each seed remains viable for 10 to 20 years! Birds scatter the seeds after they consume the hips. 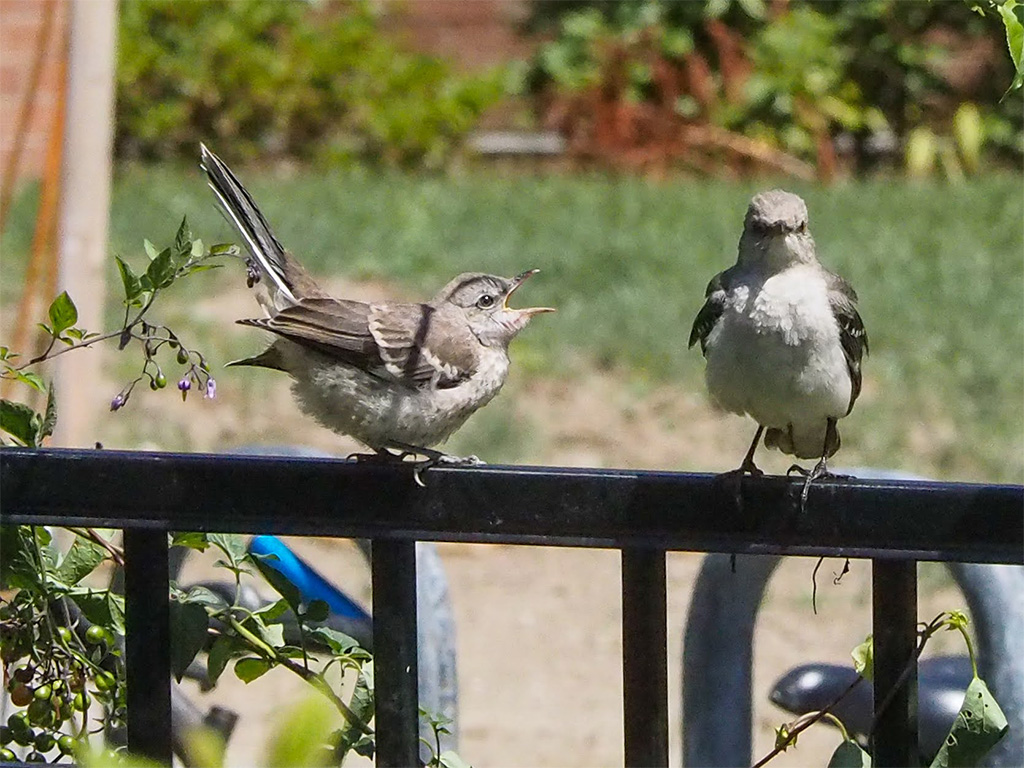 Two mockingbirds carry on an animated conversation near a community garden in Somerville in July 2020. (Photo: Jeanine Farley)

According to the U.S. Department of Agriculture Forest Service, these rose hips are “important as winter wildlife food” for everything from grouse, pheasants and turkeys to cedar waxwings and robins; from chipmunks, deer and opossums to beavers, skunks and mice. On the other hand, this rose is a serious pest plant categorized as a noxious weed in many states. In Vermont it is classified as an “exotic plant species considered to have the potential to displace native plants either on a localized or widespread scale.” In his birdwatching guide of “Lives of North American Birds,” Kenn Kaufman writes that the success of the mockingbird in expanding its range in the Northeast may have been due to the widespread planting of the multiflora rose, which is a good nesting site and the source of the mockingbird’s favorite berries.

Despite the presence of the multiflora rose, since the 1980s, the number of breeding pairs of mockingbirds in Massachusetts and the Eastern United States has declined significantly. Northern mockingbird populations have declined by about 21 percent from 1966 to 2015, according to the North American Breeding Bird Survey. Despite this recent decrease, mockingbirds are relatively widespread in our region today. 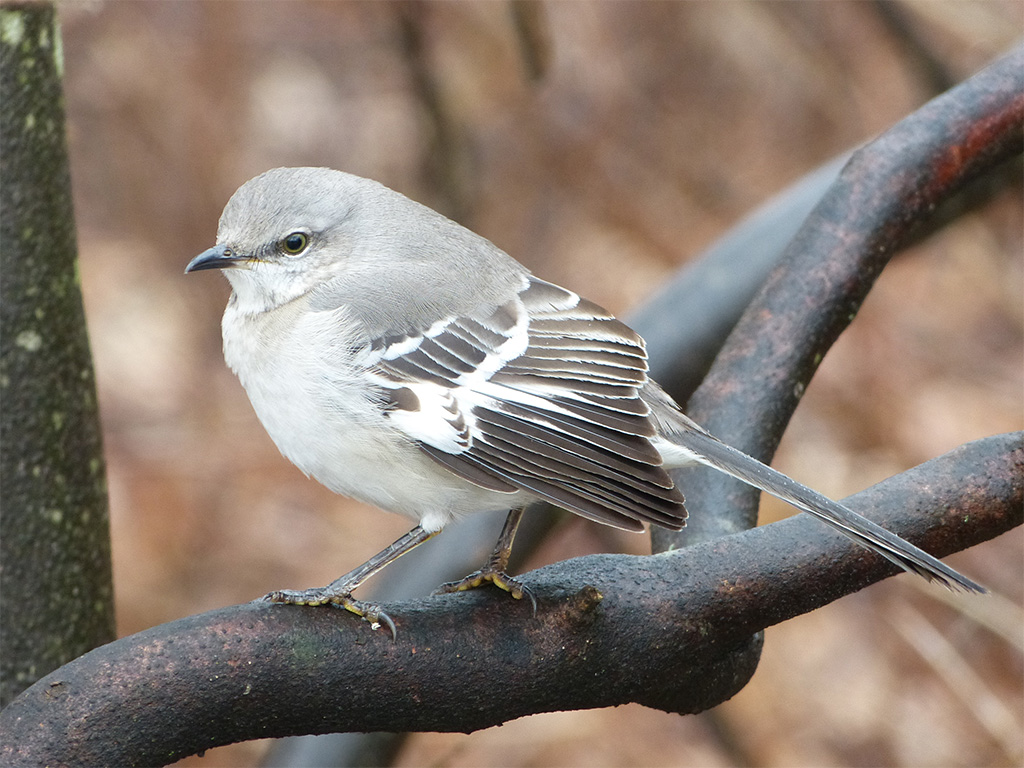