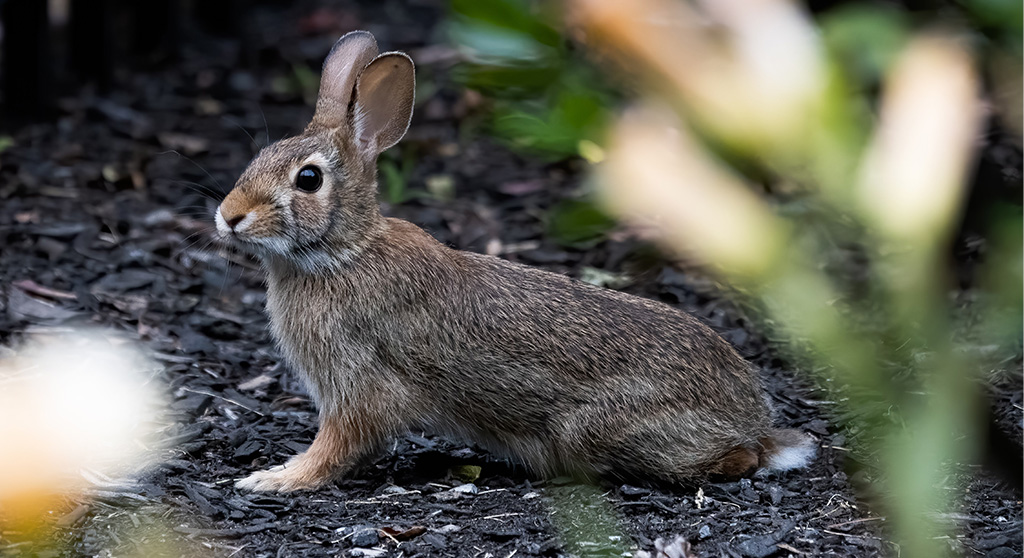 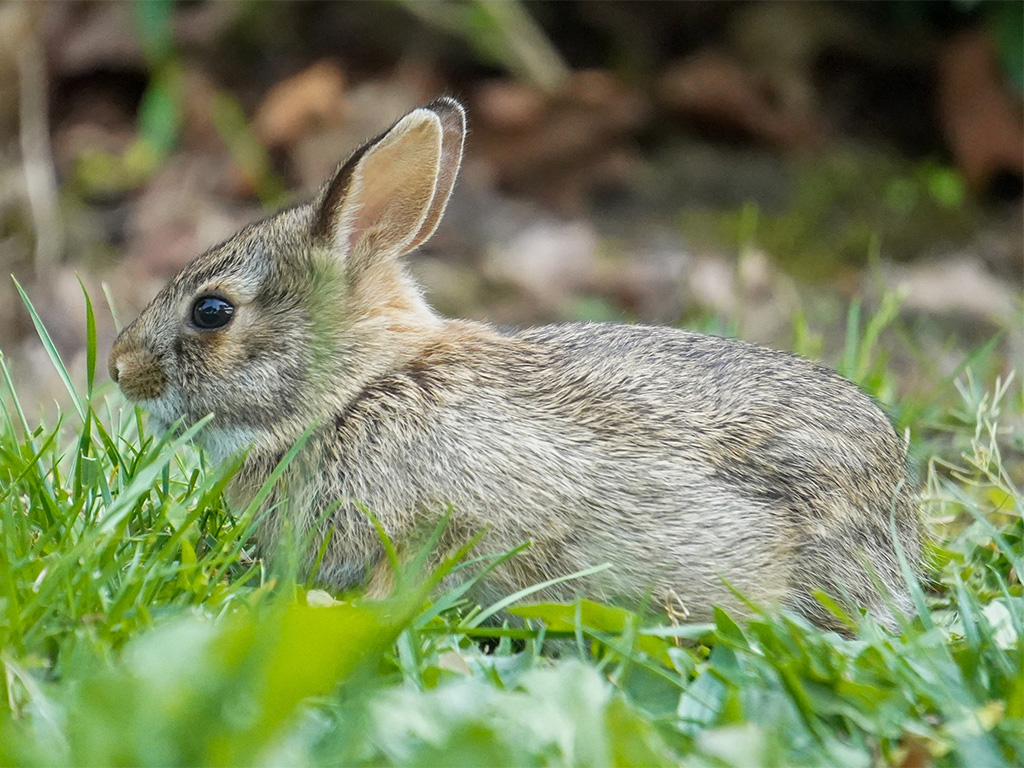 Eastern cottontail rabbits (Sylvilagus floridanus) are everywhere it seems in the summer, but where have they disappeared to now that it is winter? Not far – they neither migrate nor hibernate and are still around, although they are less active, conserving the body fat that will help them survive the winter. I know there is a rabbit near me in the winter only because I see its tracks through my garden when it snows. During the summer, I see this rabbit under bushes and in my driveway; it likes to eat my black-eyed Susans and other tender plants (such as lettuces, beans, and beets) as well as grasses, clover and berries. I place cages over some of my young garden plants, or they would be nibbled to stubs. In winter, however, when green plants are scarce, rabbits rely on woody plants to survive – tree bark and buds, twigs and even pine needles.

Rabbits digest their food twice to get the most nutrients from them. Yes, that’s right: Rabbits eat their cecotropes (fecal pellets or poop, to you and me), which contain undigested food. This behavior is called coprophagy.

Contrary to popular belief, rabbits do not dig burrows, although they sometimes repurpose a groundhog, skunk or fox burrow. They usually scratch out shallow depressions, called forms, in a clump of grass or under a bush. A rabbit might also dig a form under logs, in rock or brush piles, or under porches or buildings.

Common, but not native 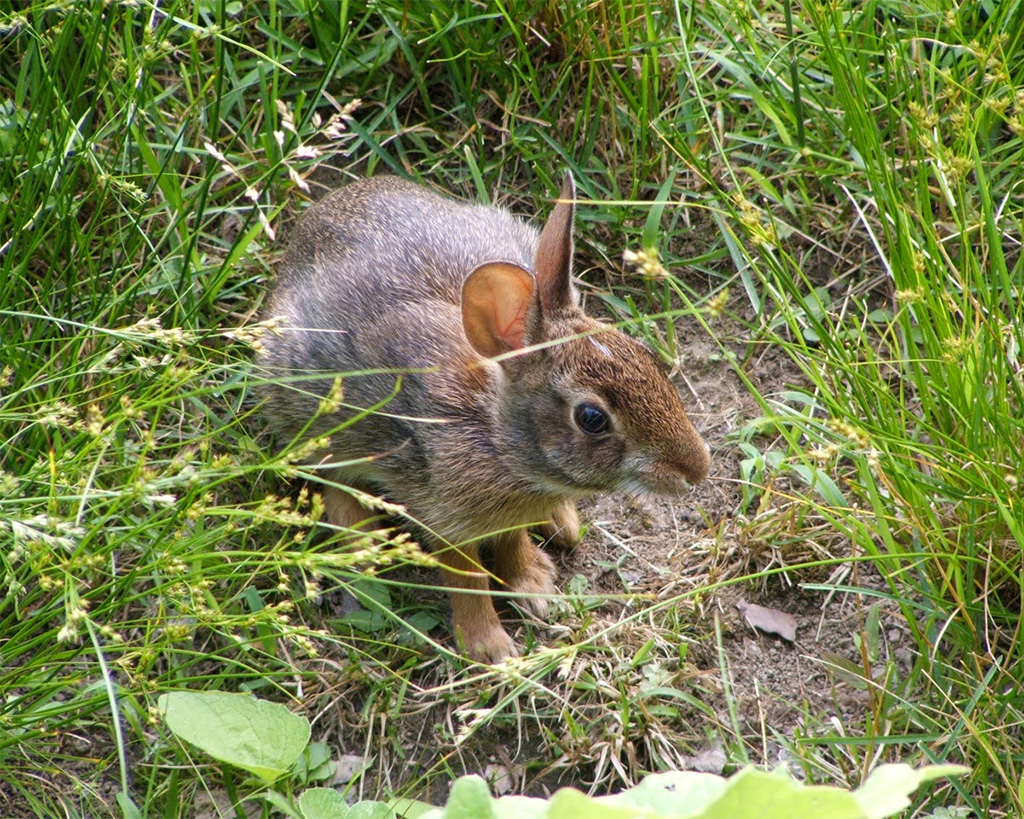 About half of all eastern cottontail rabbits have a thin white dot on the forehead. (Photo: Brian Rusnica) 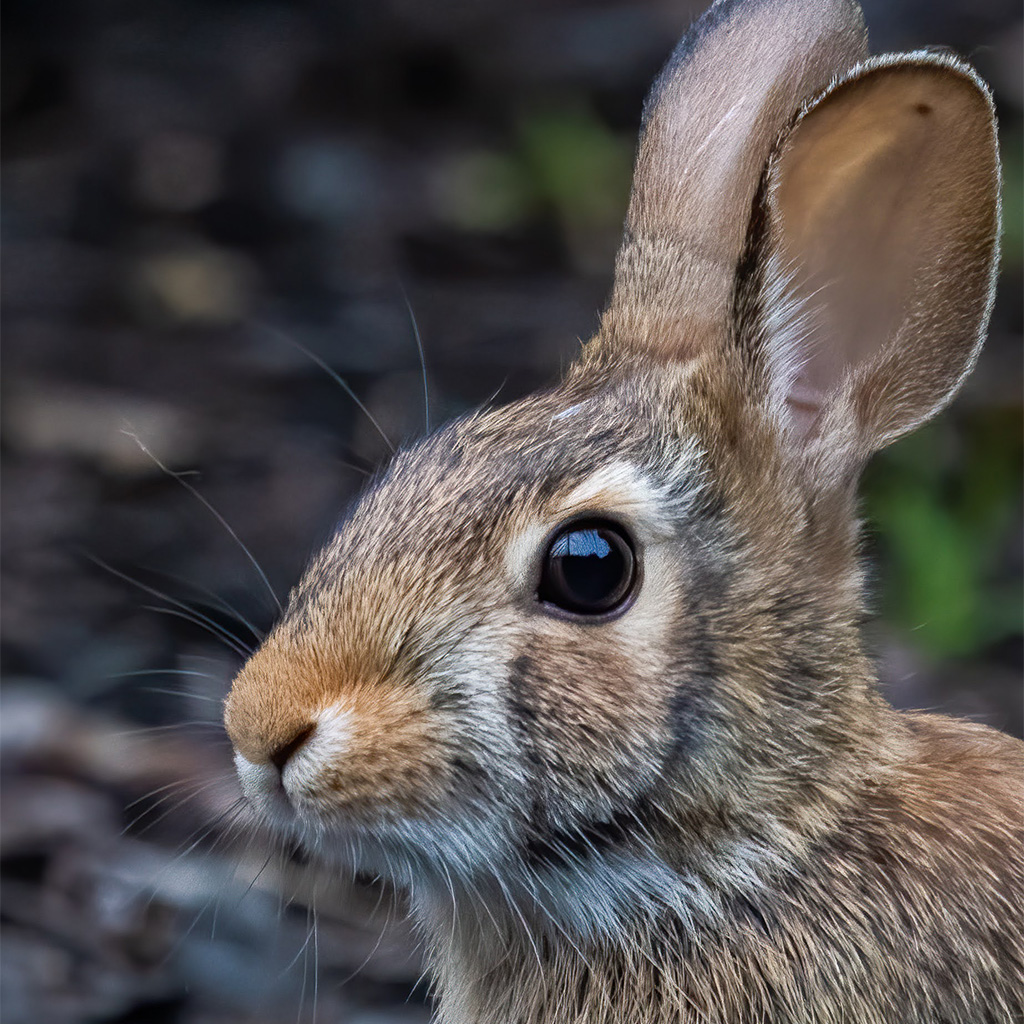 Eastern cottontails, however, are more adaptable. They have better eyesight than New England cottontails, which means they can forage farther from their dens in search of food and allows them to live in more places, such as grassy yards, fields and farms. 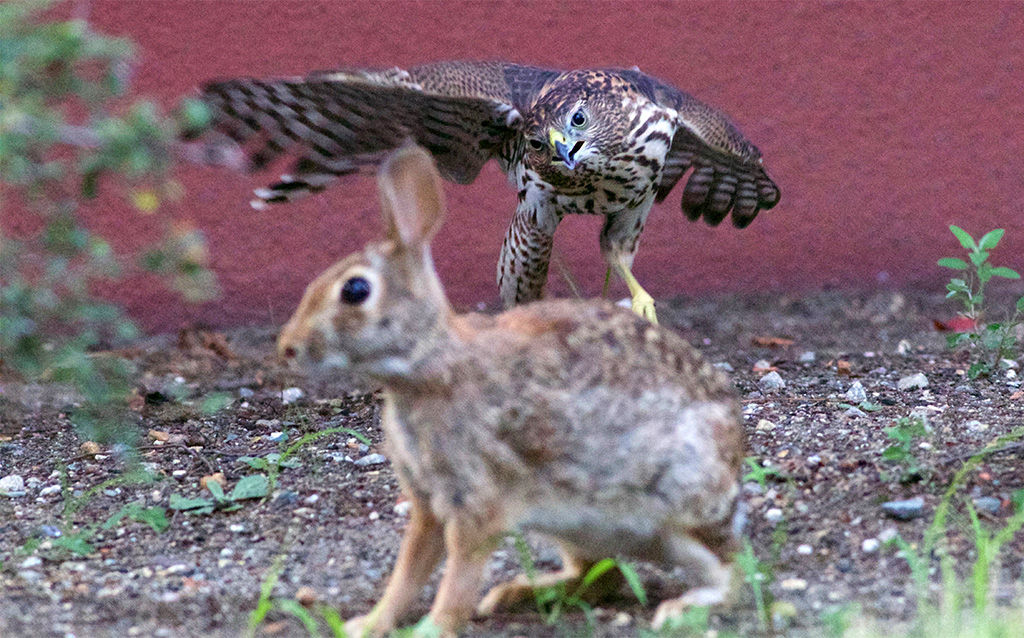 A Cooper’s hawk and an eastern cottontail in Cambridge. Rabbits are an important prey species for many other animals. (Photo: Brian Rusnica)

Eastern cottontails are active near dawn and dusk. They run in a zig-zag pattern to escape predators and they are often nocturnal foragers who spend most of the day resting under bushes or other sheltered spaces. Cottontails prefer to forage when visibility is low, so you might also see more of them on foggy or rainy days.

Eastern cottontails in our region breed from mid-February to September. During the night, a female digs a small depression about 4 inches deep in the ground for a nest. She lines the nest with grass, leaves and her own fur. She hides the nest by covering it with more grass, twigs, or leaves.

Baby rabbits are born usually about five at a time with their eyes closed; that lasts for up to a week, during which the mother returns to the nest about twice per night to nurse them but otherwise stays away in an effort to keep predators at bay. Even so, almost half of young rabbits succumb to predators within a month of being born. (It is not unusual to come upon a rabbit nest in a grassy lawn. I once stumbled upon such a nest on a lawn on the Tufts campus. A neighbor found one in her backyard.) The young begin to move out of the nest after about two weeks. By three or four weeks, the youngsters are completely independent. A female rabbit in our region will usually have three or four litters per year. 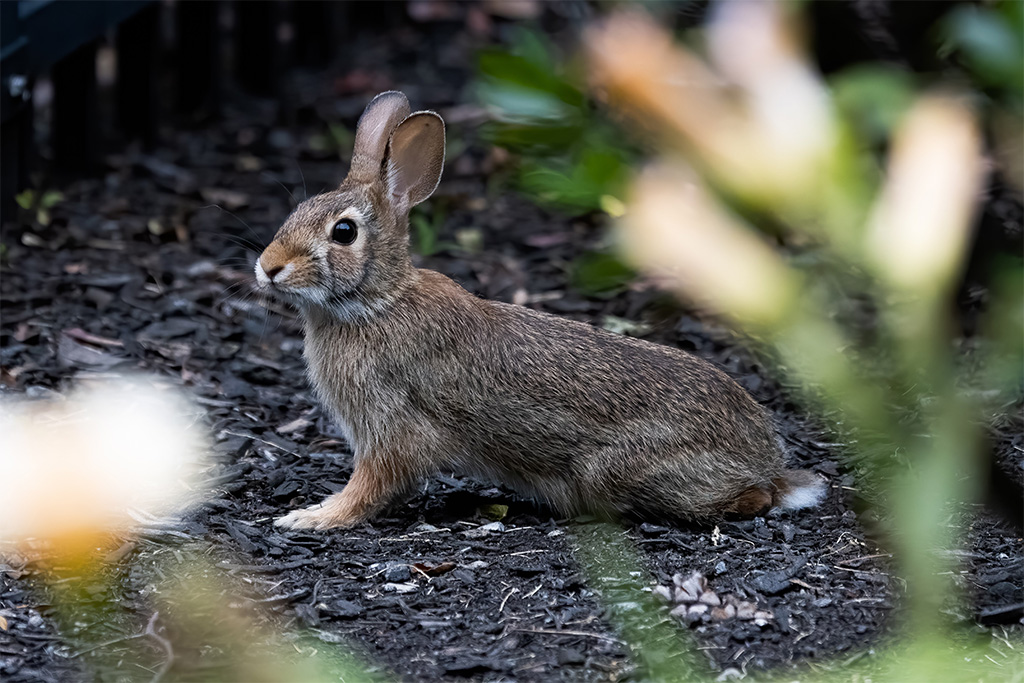 Cottontail rabbits get their name from their white tail that looks like a ball of cotton. (Photo: Richard George)

Why do rabbits have such large ears? A rabbit uses its ears to hear with, of course. The large ears can detect sounds up to 2 miles away, and can be rotated to help identify the direction of a sound. But a rabbit’s ears also help it regulate body temperature: The large surface area of the ears contain a network of blood vessels for heat exchange, and the blood vessels swell when the rabbit is hot to provide more surface area for cooling, then contract when it is cool to retain body heat. Rabbits tolerate cold weather much better than hot weather.

You won’t see references to rabbits in works before the 18th century because back then a rabbit was called a coney (and then rhymed with honey) from the French conis. In the 1800s, the pronunciation with the long o became more common. The term rabbit first referred to baby coneys, but eventually the word came to mean the adult as well. Coney isn’t used anymore, but there are still some words that retain the name, such as Coney Island in New York or the surname Cunningham. 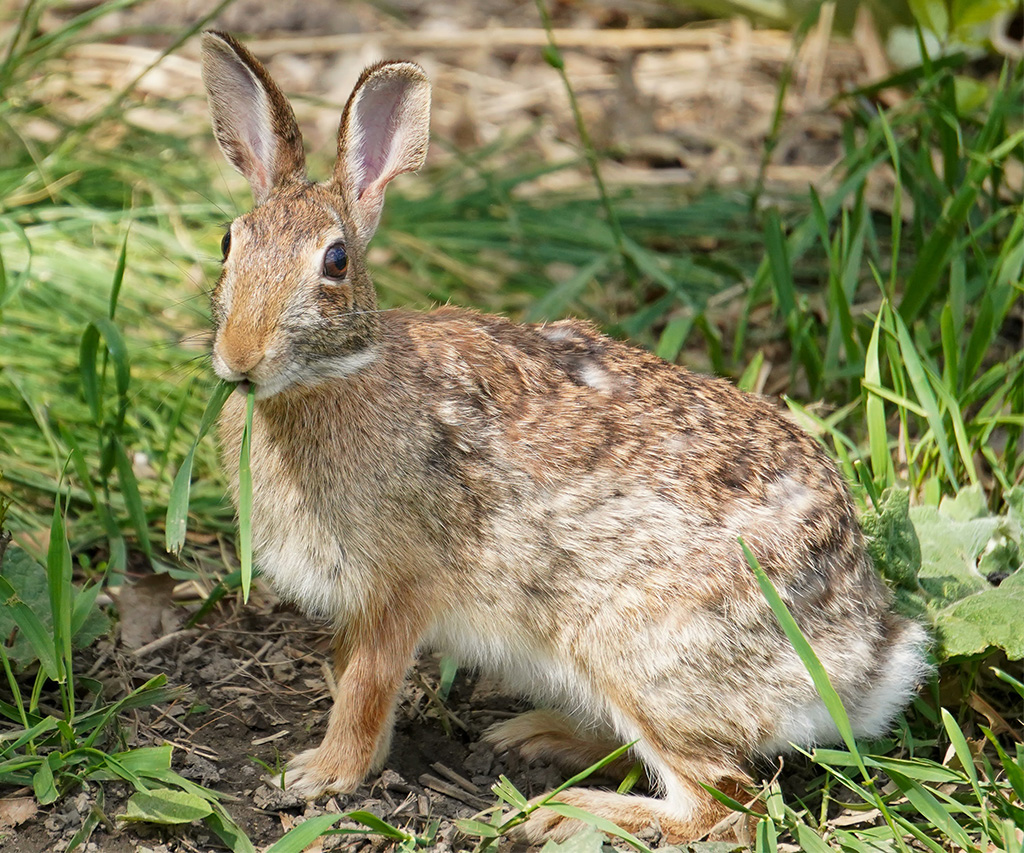 In a given year, only about 20 percent of adult rabbits survive. On average, wild rabbits live about 15 months. Rabbits have many predators, including hawks, coyotes, dogs, foxes, raccoons and crows. Rabbits are a vital link in the food chain because they are such an important prey species. If it were not for rabbits, many other species would suffer. As Henry David Thoreau said in Walden:

What is a country without rabbits … ? They are among the most simple and indigenous animal products; ancient and venerable families known to antiquity as to modern times; of the very hue and substance of Nature, nearest allied to leaves and to the ground … If the forest is cut off, the sprouts and bushes which spring up afford them concealment, and they become more numerous than ever. That must be a poor country indeed that does not support a hare. 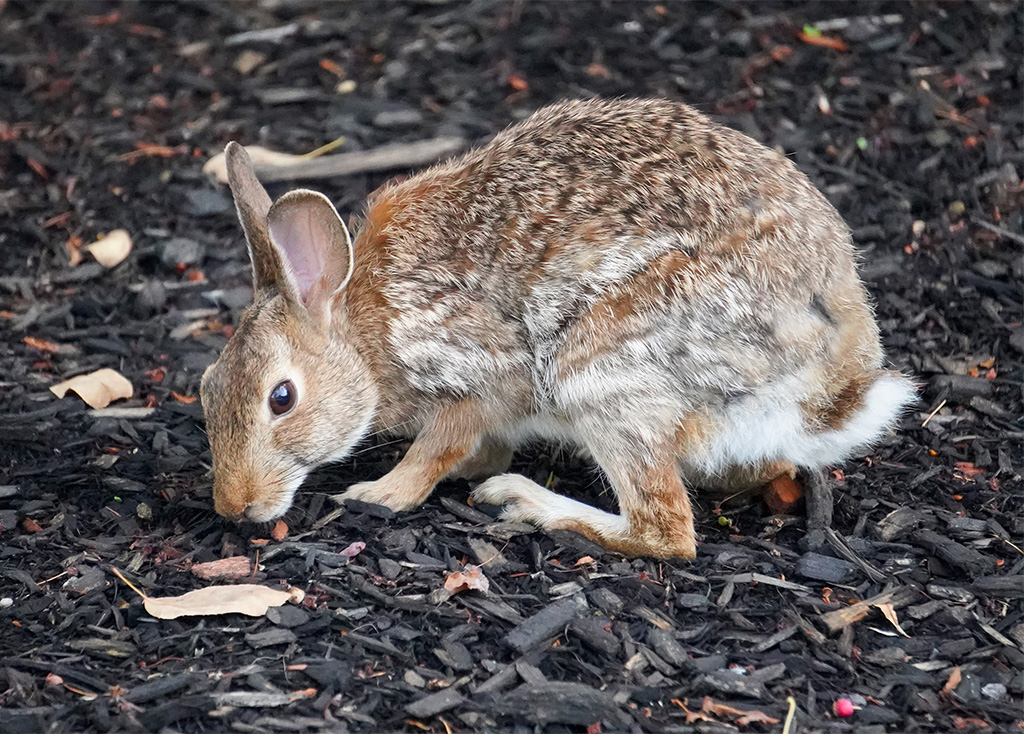