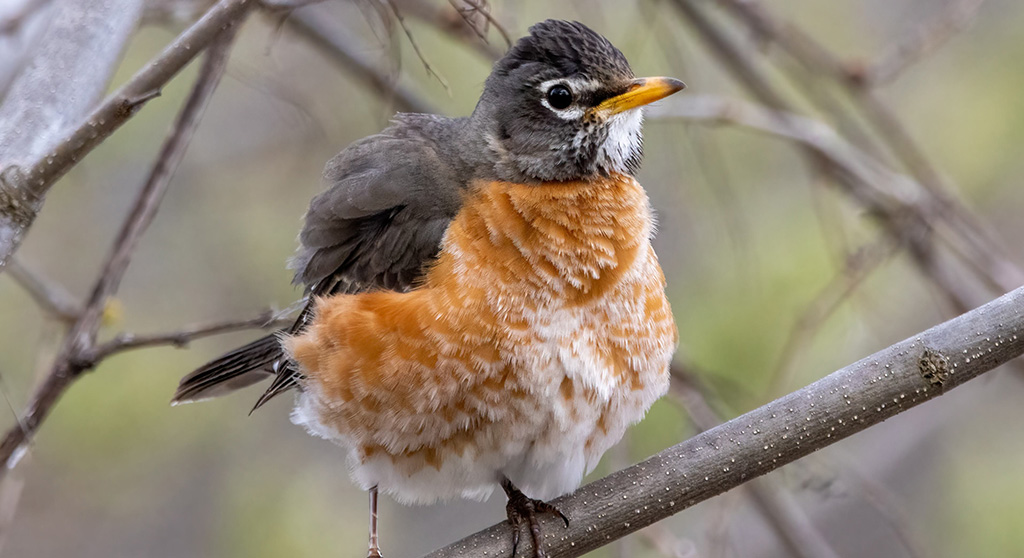 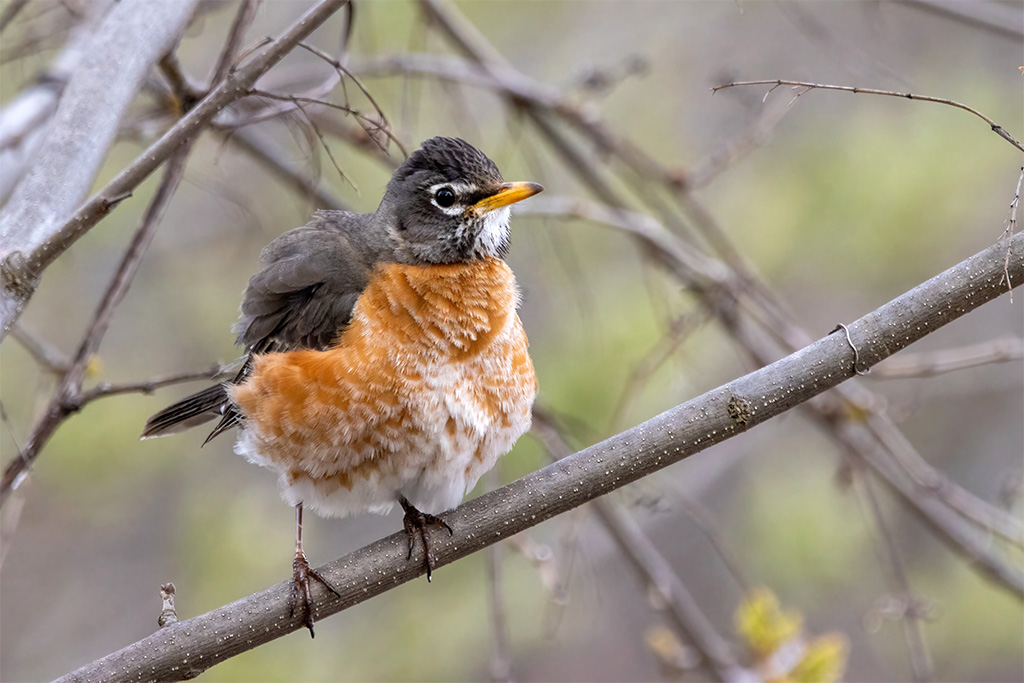 A robin in Huron Village fluffs up its feather to stay warm on a chilly April day. (Photo: Richard George)

Everyone knows robins – the most abundant bird in North America. (There are 370 million of these guys!) About 40 percent of the robin’s diet is insects such as worms, grubs, caterpillars; the rest is fruits and berries, though this varies by season. The ability to live on fruits and berries allows the birds to winter farther north than many others.

American robins are one of the earliest birds to lay eggs in spring and one of the earliest to sing and hunt for worms and grubs in the morning. (They really are the “early birds.”) Robins like to eat worms so much that instead of laying eggs early in the morning like most other birds, they hunt for worms instead. Robins lay as the day warms up and the worms retreat farther underground. 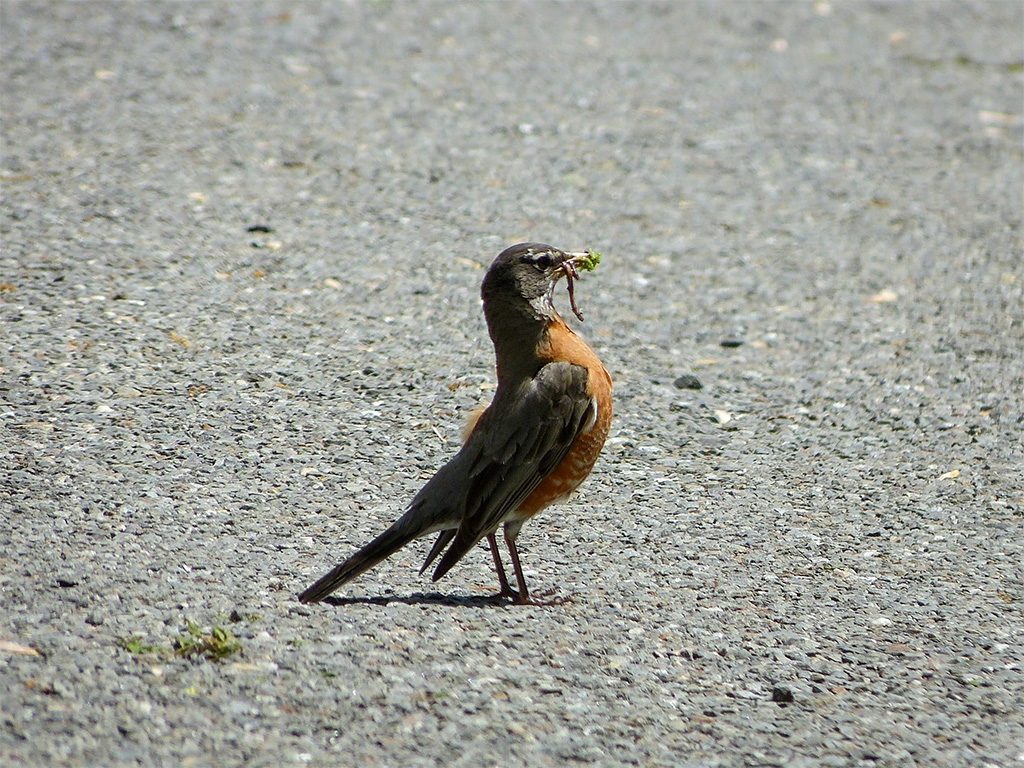 A robin along the Charles River collects worms and caterpillars. (Photo: Brian Rusnica)

You might think male and female robins look alike, but that is because humans see three wavelengths of light – red, green and blue. Birds can see four wavelengths that include ultraviolet, giving them vision much richer than ours. And while it’s difficult for us to know what we miss compared with birds, we know one thing: Robins perceive the breast of a male robin as a completely different color from that of a female, because the male’s feathers reflect more UV.

Beyond helping bird select mates or tell individuals apart, UV vision can be used by birds in ways that surprise us. For example, voles produce urine that absorbs UV, and mark their trails with it. Raptors can see these UV trails when flying above, and they focus their hunting on areas with high vole density. 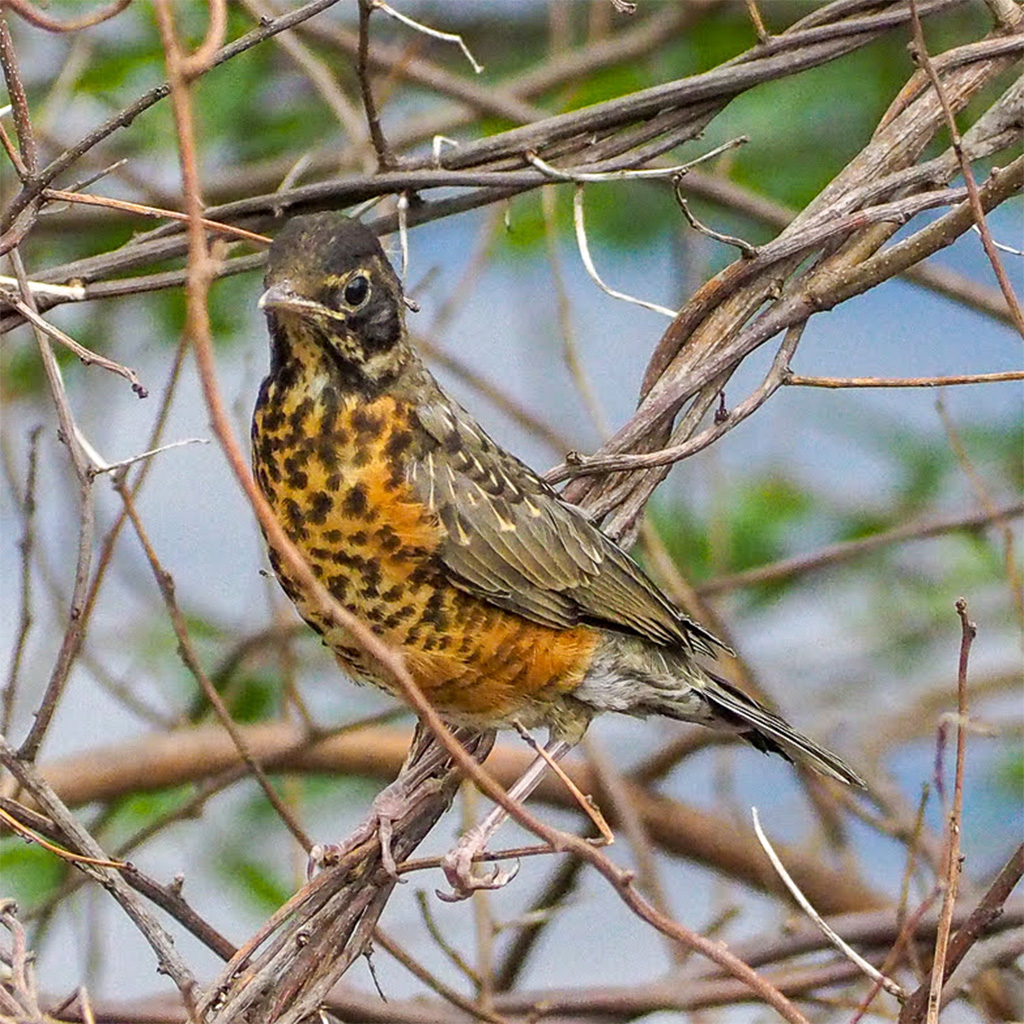 It is not just color that birds are good at seeing. They have two to eight times better visual acuity than humans because they have more rods and cones in their eyes. You may remember learning in school that cones help eyes see color, and rods help eyes see in dim light. Birds have eyes that see well in low light; have a wide visual field, because the eyes are on the sides of the head; have great clarity and sharpness; and can see great distances.

Some robins spend the winter in Massachusetts, fluffing their feathers to insulate themselves from the cold. There can be a 100-degree difference between their body temperature (104 degrees Fahrenheit) and the air temperature. Overwintering robins migrate north to breed as the weather warms in spring. 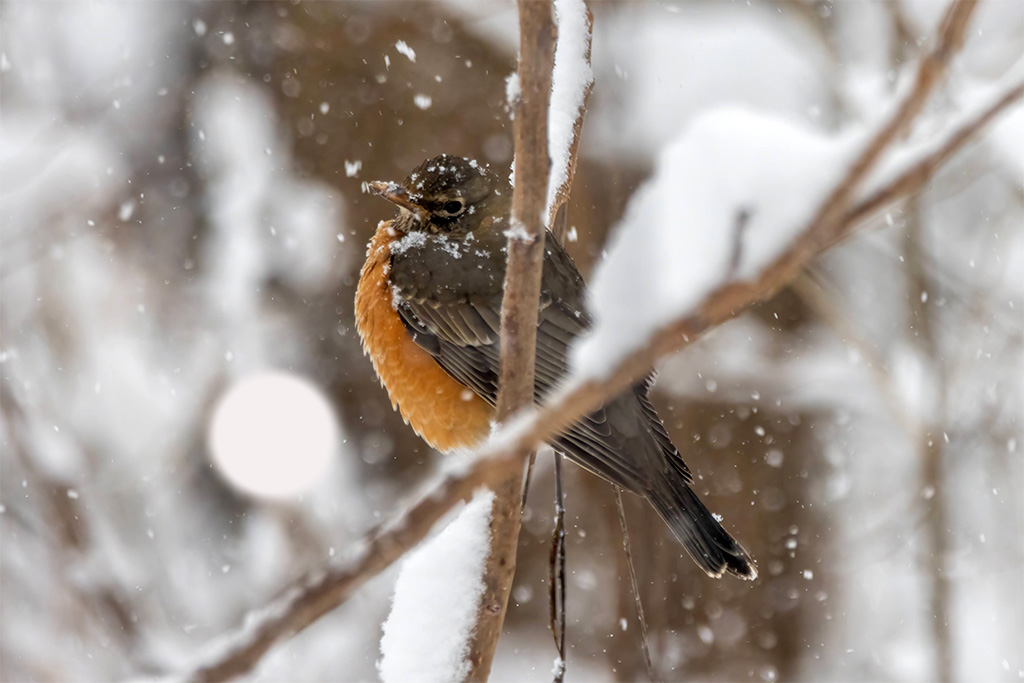 A robin braves a snowstorm in Huron Village in January 2022. (Photo: Richard George)

Our breeding robins return from the south as the ground thaws and worms and insect larva become available again. Males arrive first to establish their territories; females arrive a few weeks later, saving energy for reproduction.

Robins use mud to build their nests. The outer shell is made of grass, twigs and feathers. The shell is lined with mud and cushioned with soft materials such as fine grass. The female lays one blue egg a day for three to five days. The blue pigment shields the interior of the egg from light and harmful UV rays; the dark color also causes the eggs to warm up more than white shells would. 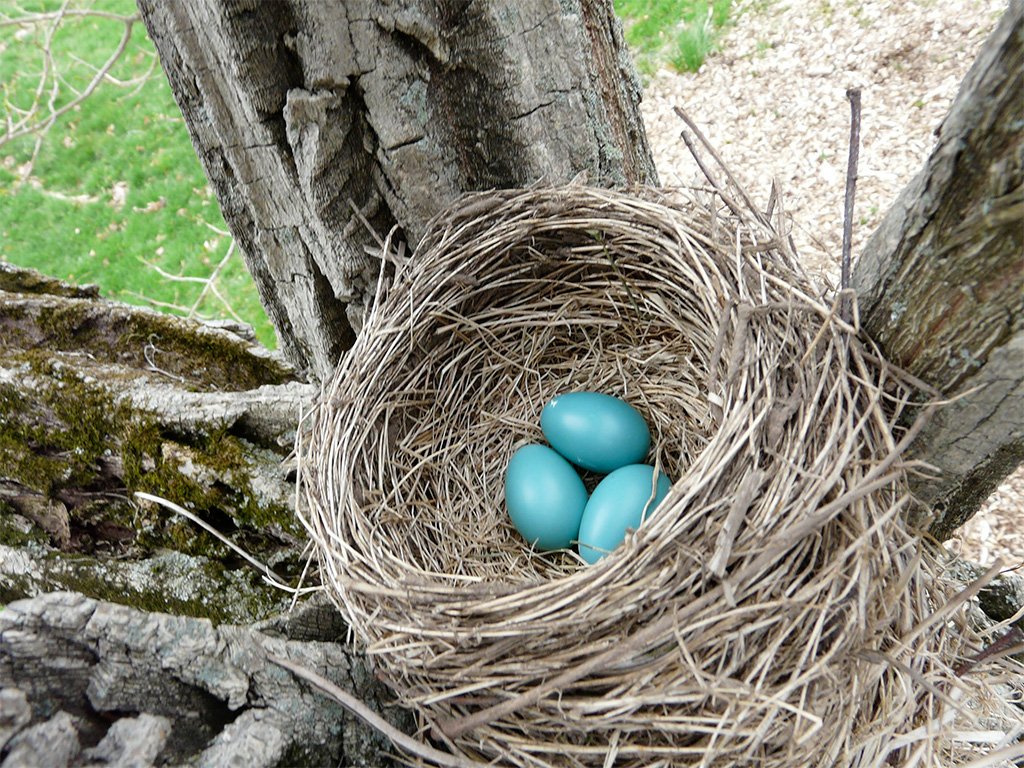 The female robin lays one blue egg a day for three to five days. The blue pigment shields the interior of the egg from light and harmful UV rays. (Photo: Brian Rusnica)

Female robins have an area of featherless skin underneath their body that they use to transfer body heat to their eggs. They spend about 50 minutes per hour incubating their eggs for about two weeks until the eggs hatch. The parents feed the youngsters in the nest for about 13 days and continue feeding them for several more days after the youngsters fly away, or fledge. A young robin can eat its weight in insects, worms and berries every day, so the parents deliver 100 or more meals per day. After the young leave, the parents start a new nest. Robins in our area can have up to three broods per season, but it is estimated that only about 25 percent of baby robins survive. 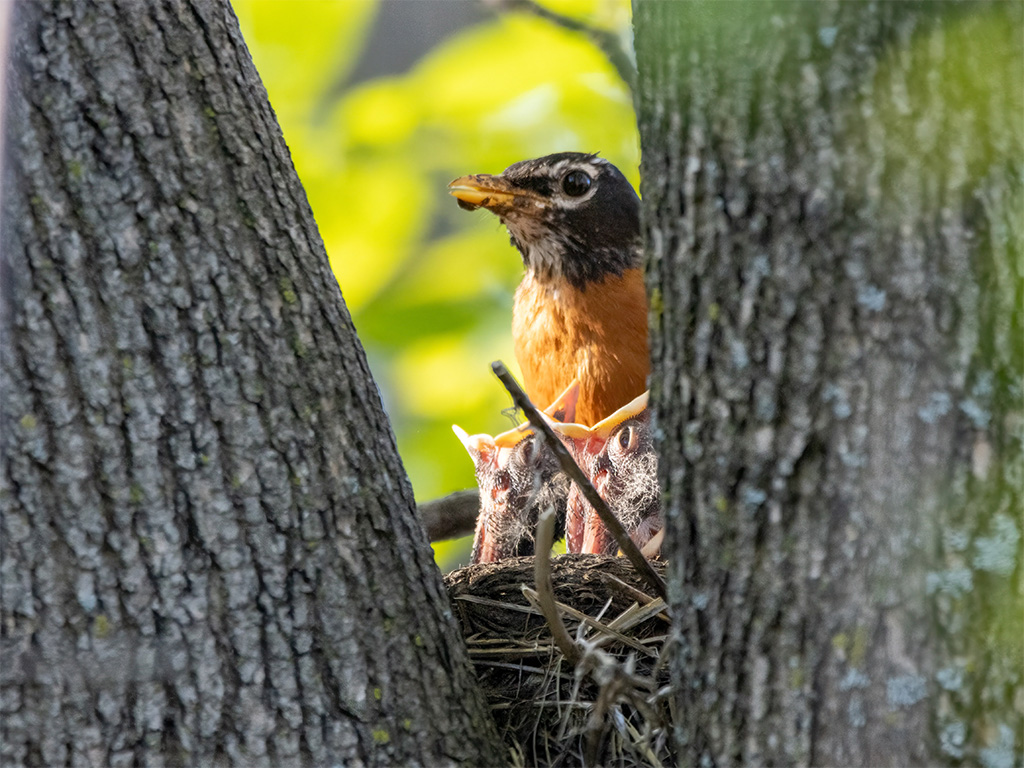 An adult robin tends to its young in North Cambridge. (Photo: Richard George)

Although we think of robins mainly as harbingers of spring, people in the 1800s thought of robins as game birds or as household pets. According to John James Audubon in 1834, the presence of robins

is productive of a sort of jubilee among the gunners, and the havoc made among them with bows and arrows, blowpipes, guns, and traps of different sorts, is wonderful. Every gunner brings them home by bagfuls, and the markets are supplied with them at a very cheap rate. Several persons may at this season stand round the foot of a tree loaded with berries, and shoot the greater part of the day, so fast do the flocks of Robins succeed each other. They are then fat and juicy, and afford excellent eating.

When [robins] feed on the berries of the poke-plant, the rich crimson juices colour the stomach and flesh of these birds to such an extent as to render their appearance, when plucked, disagreeable; and although their flesh retains its usual savour, many persons decline eating them.

Some people also kept robins as pets. According to Thomas Nuttall in 1832,

[Robins] are commonly brought up in the cage, and seem very docile and content. They sing well, readily learn to imitate lively parts of tunes … They acquire also a considerable taste for mimicry, imitating the notes of most of the birds around them … At times they become very tame, and will go in and out of the house with domestic confidence, feel uneasy when left alone, and on such occasions, have sometimes the sagacity of calling attention by articulating endearing words, as pretty, pretty, etc. …They become almost naked in the moulting season, in which they appear to suffer considerably, yet have been known to survive for 17 years or upwards. 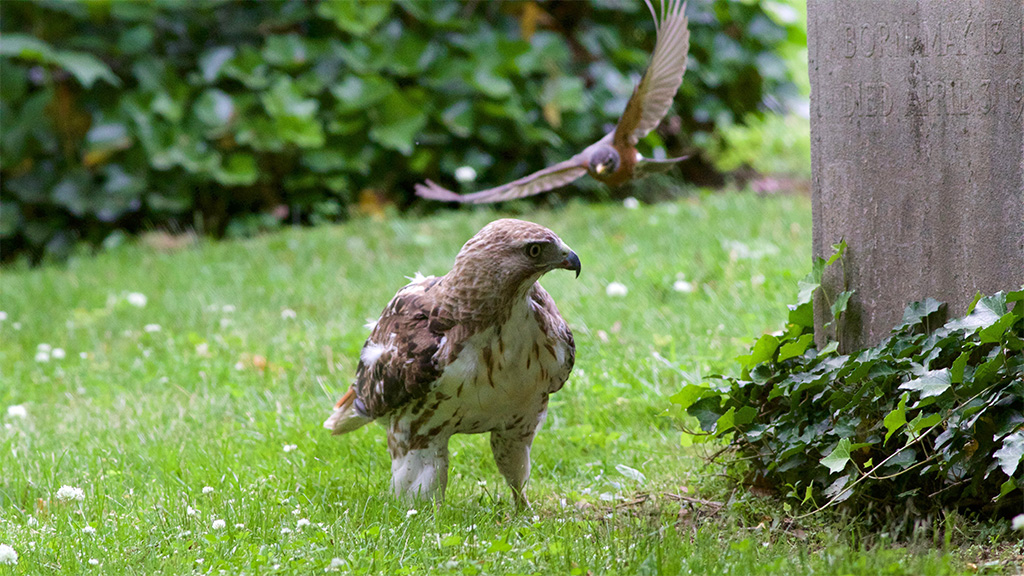 West Nile virus has infected more than 50,000 people in the United States since 1999, although most cases are mild and go unreported. The virus is spread mostly through bites by infected mosquitoes. The virus can infect many species of animals, such as dogs, cats, squirrels and rabbits, but these animals do not transmit the virus to others because West Nile virus is amplified to high levels only in the blood of birds. American robins are largely responsible for transmitting West Nile to humans. Mosquitoes that spread the virus seem to bite robins more than other species, such as house sparrows, which are more plentiful. Many birds, such as crows and blue jays, die quickly from the virus, but robins survive longer and therefore more mosquitoes bite them, so more mosquitoes transfer the virus to humans. The incidence of West Nile in Massachusetts is quite low (last year the state had seven reported cases, but that’s been down to as low as two in 2019), so use bug spray if you are concerned, but do not fear the presence of robins. 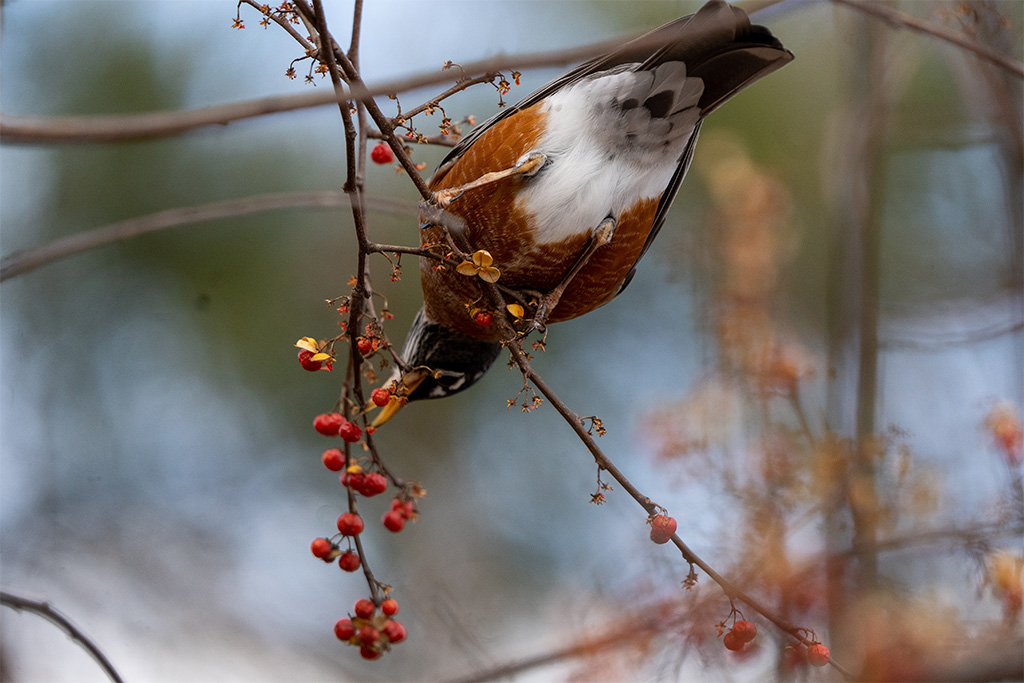 A robin at Fresh Pond in January. In the winter robins feed almost continually to store up fat to burn at night to keep warm. (Photo: Jeanine Farley) 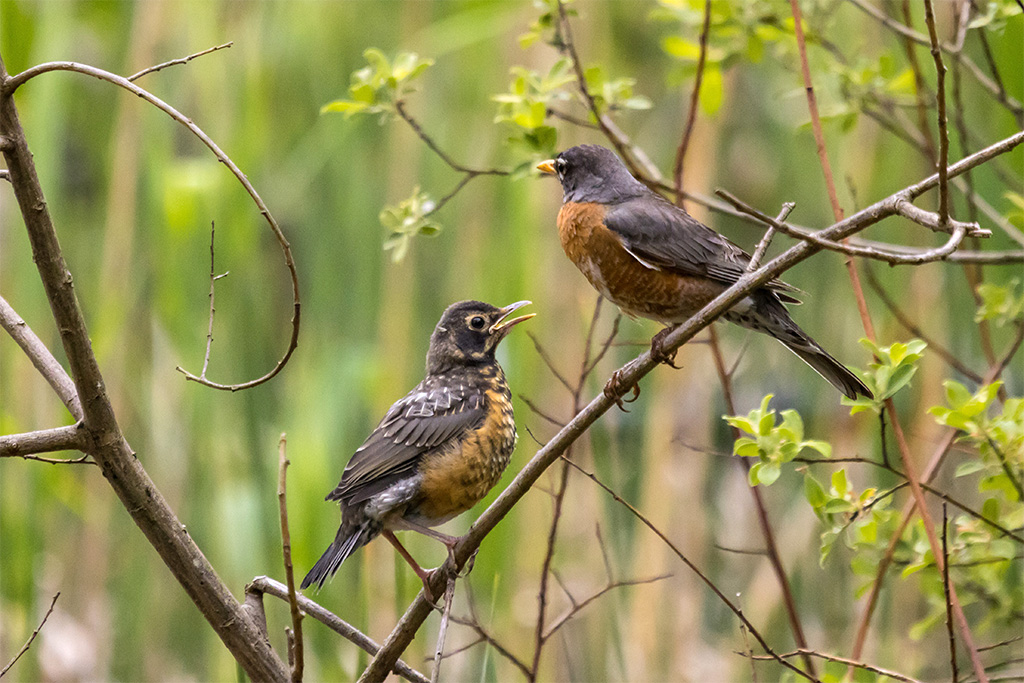 An adult robin and a juvenile carry on a conversation in May. (Photo: Richard George)