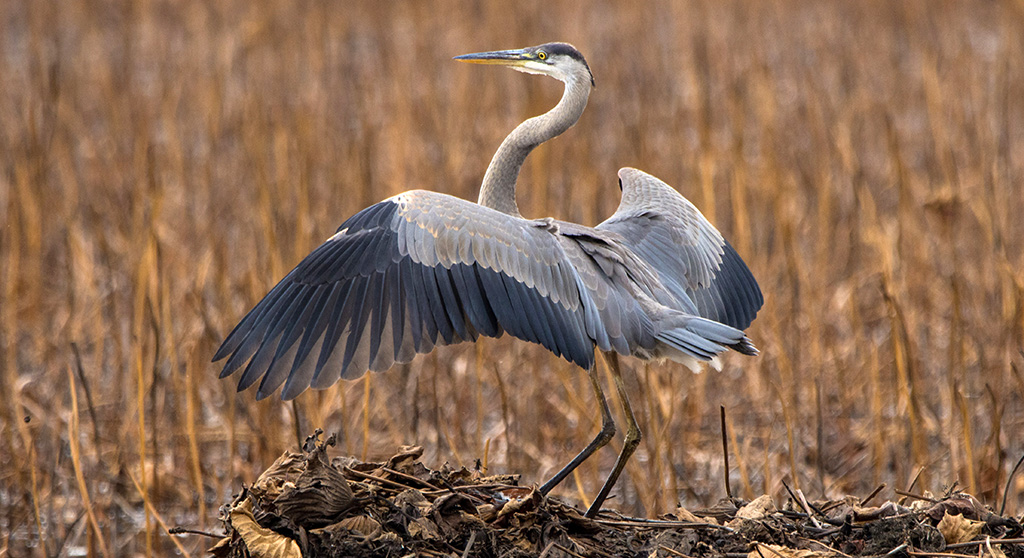 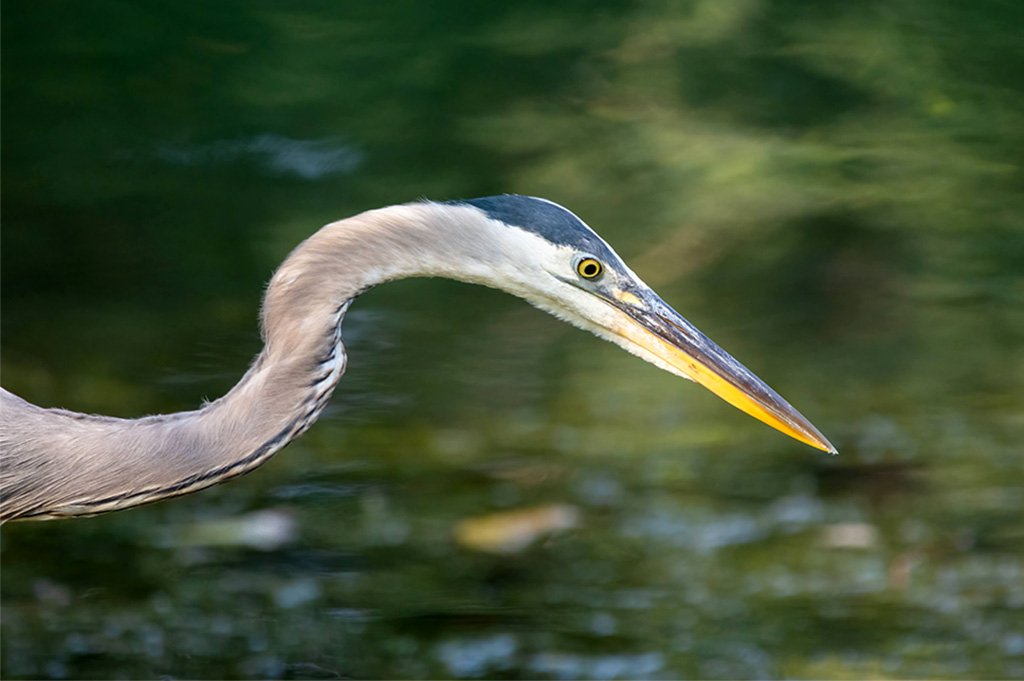 Who has not been dazzled as they walk along some shallow watery shore by the sight of a 4-foot-tall great blue heron standing almost motionless? Great blue herons seem as content in a watery ditch as in a river or pond? They are are large, long-legged birds with spearlike bills that eat a great deal – mostly fish, but also crabs, insects, rodents, frogs, ducklings, salamanders, snakes or other small critters. They hunt wading in slow motion in shallow water in light or dark, thanks to the night vision imparted by a high percentage of rod photoreceptors in their eyes.

In the 1800s, people hunted great blue herons for their long head feathers, which milliners used to decorate women’s hats and clothing. Hunters often ventured into nesting colonies to shoot the easy targets in great numbers, though at least one person of the era, Rowland E. Robinson, made the case for simply observing these birds:

Perhaps a great heron too intent on his fishing or frogging, or dozing in the fancied seclusion of his reedy bower, springs up within short range and goes lagging away on his broad vans. He may be taken home to show, for he is worth showing even when killed. But if you wish your friends to see him at his best, bring them to him and let them see how well he befits these sedgy levels – a goodly sight, whether he makes his lazy flight above them or stands a motionless sentinel in the oozy shallows. The marshes would be desolate without him.

As with many other birds, the pesticide DDT decimated the heron population in the 1900s. A ban on the chemical has helped them stage a comeback in the past 30-some years – but also thank beavers, another protected species, for increasing their habitat: When beavers dam streams, they create ponds and marshlands, and dead trees in swampy areas are perfect sites for great blue herons, who prefer to nest starting in the early spring on islands, trees in swamps or high branches surrounded by water to protect themselves, their eggs and their babies from predators. 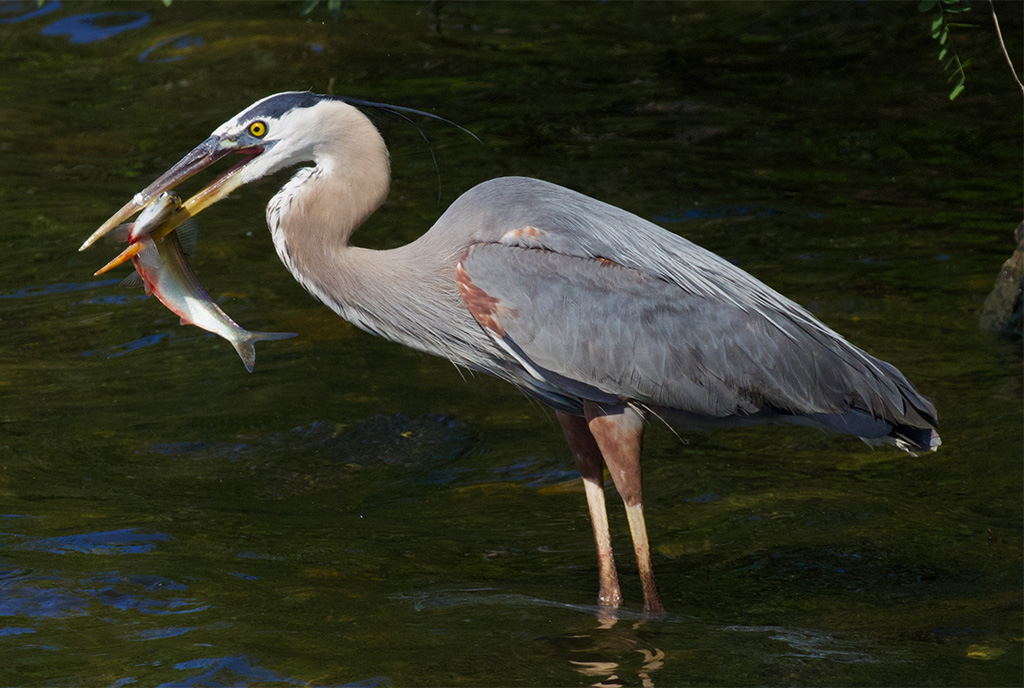 A great blue heron, with its rust-colored thighs and a pair of dark plumes on the back of the head, enjoys a herring, such as at the Mystic Lakes in June … (Photo: Brian Rusnica) 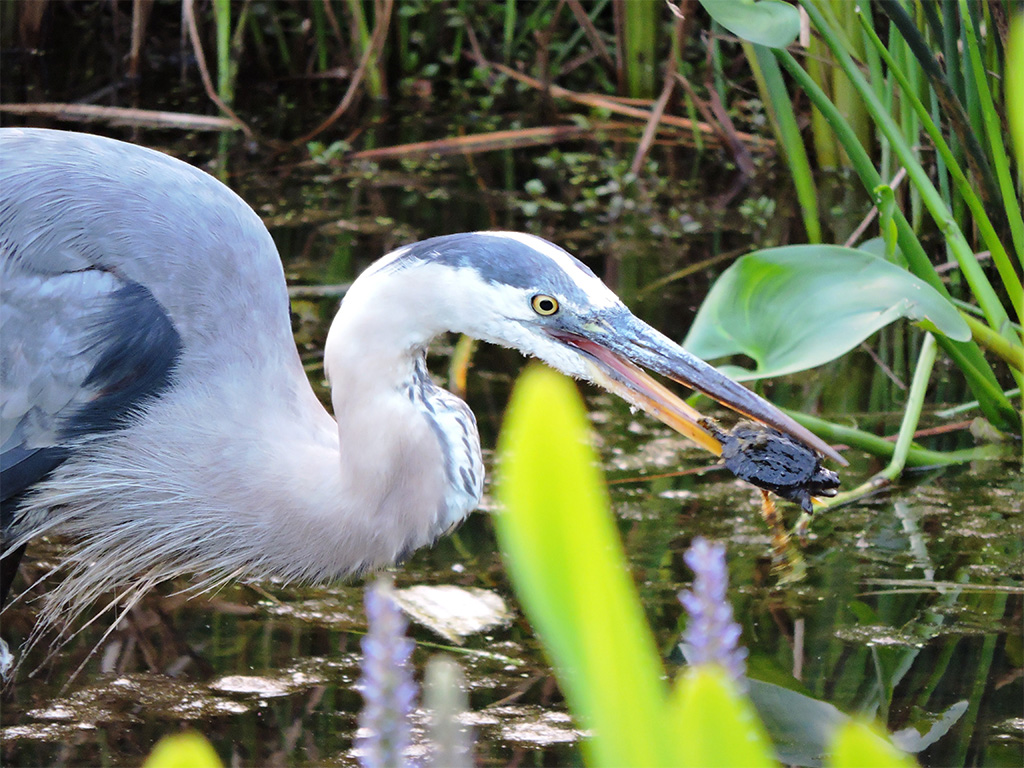 … a turtle, such as at Alewife Reservation in August … (Photo: Ann Schlesinger) 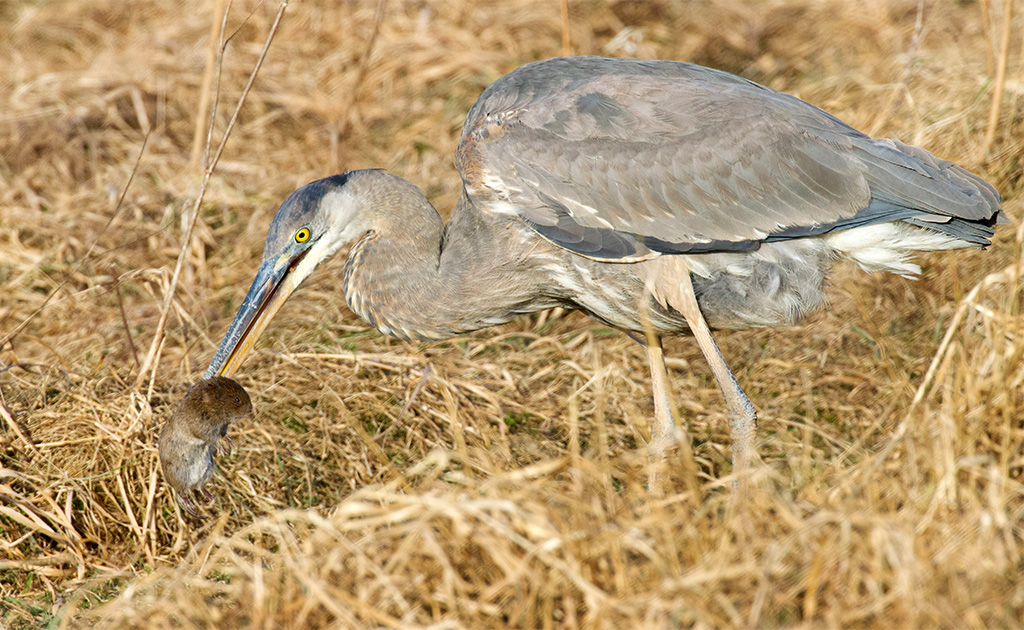 … a vole, such as this one in January … (Photo: Brian Rusnica) 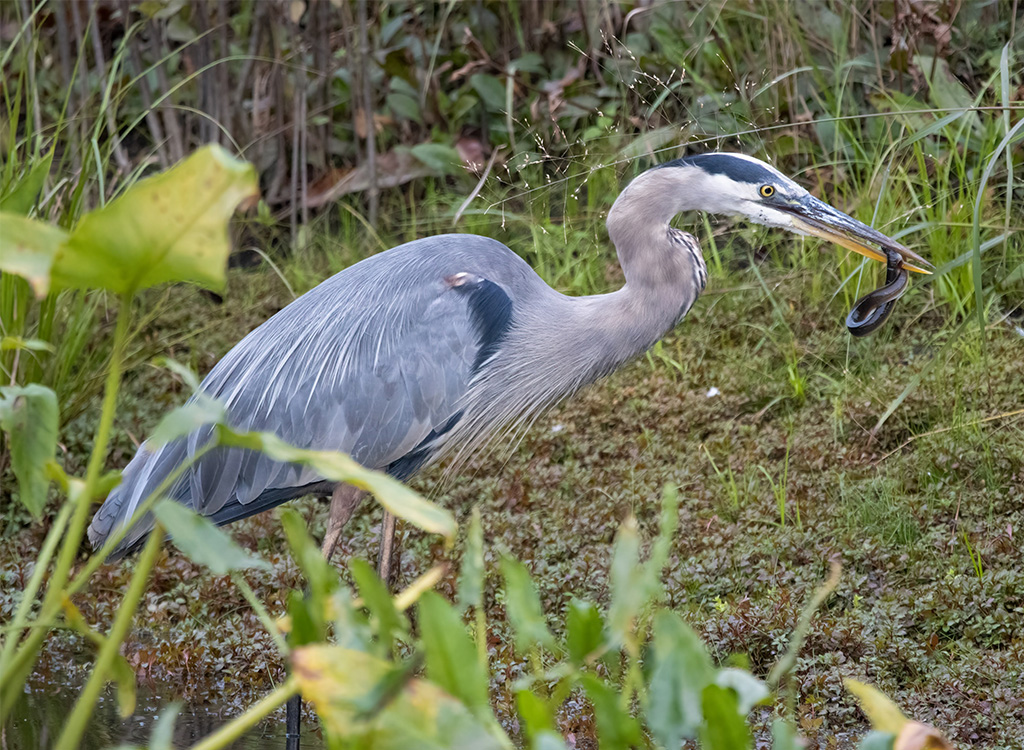 … or a snake, such as this one in East Arlington. (Photo: Richard George)

Great blue herons gather in colonies of around 160 nests built close to feeding spots and difficult to reach by foot.

Most herons in Massachusetts migrate south in the fall, but some overwinter near marshes and open water where they can catch fish or small mammals. Because of their diverse diet, great blues can winter farther north than most other herons. They can even survive in areas where the water freezes, because they also forage on land, especially in grassy areas. Most great blue herons in Massachusetts migrate south from mid-July to September; they return in March so males can go courting. 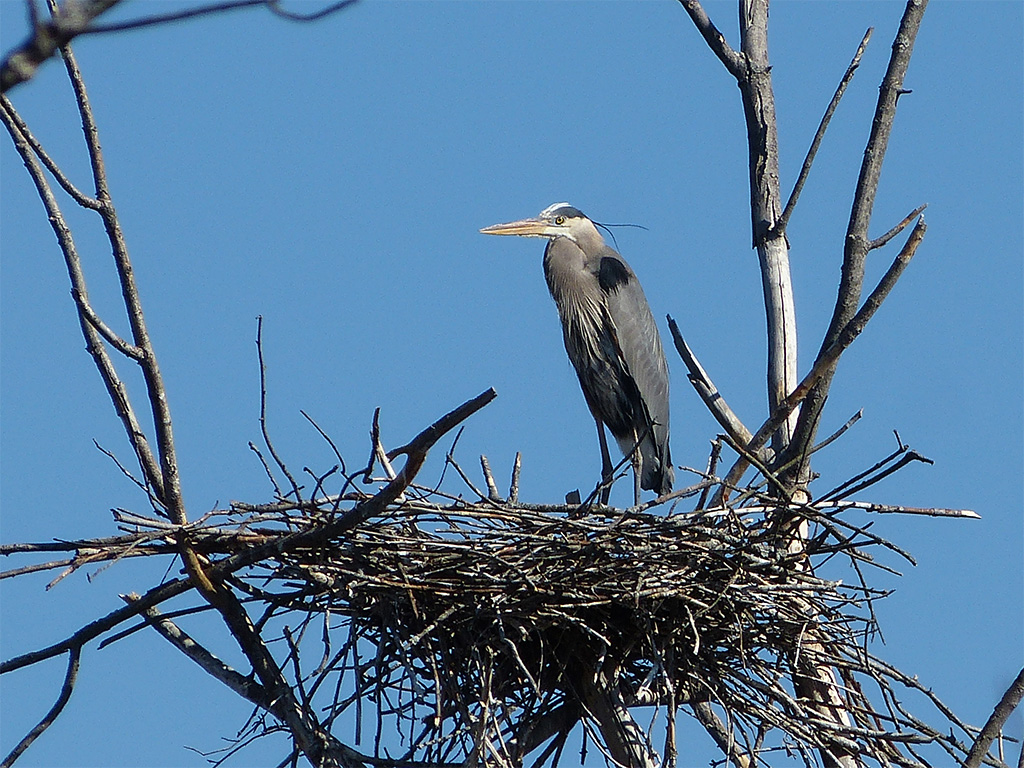 Once a female has chosen a mate, the pair stays together for the season. Males collect twigs and branches that females arrange into their nest, a flat platform of sticks lined with moss and other soft plant material. They add to the nests each year, so over time a nest becomes quite large – as much as 4 feet in diameter.

The female lays, on average, four eggs (at two-day intervals) that hatch about a month later over a period of several days. Males and females take turns incubating the eggs, which are left unattended for only about six minutes an hour. At first, the parents regurgitate liquid to feed the newly hatched babies; as the birds grow, the parents leave partially digested food and then whole fish, frogs and snakes for the babies to devour. Adult herons eat four times as much when they are parenting as when they are incubating eggs. 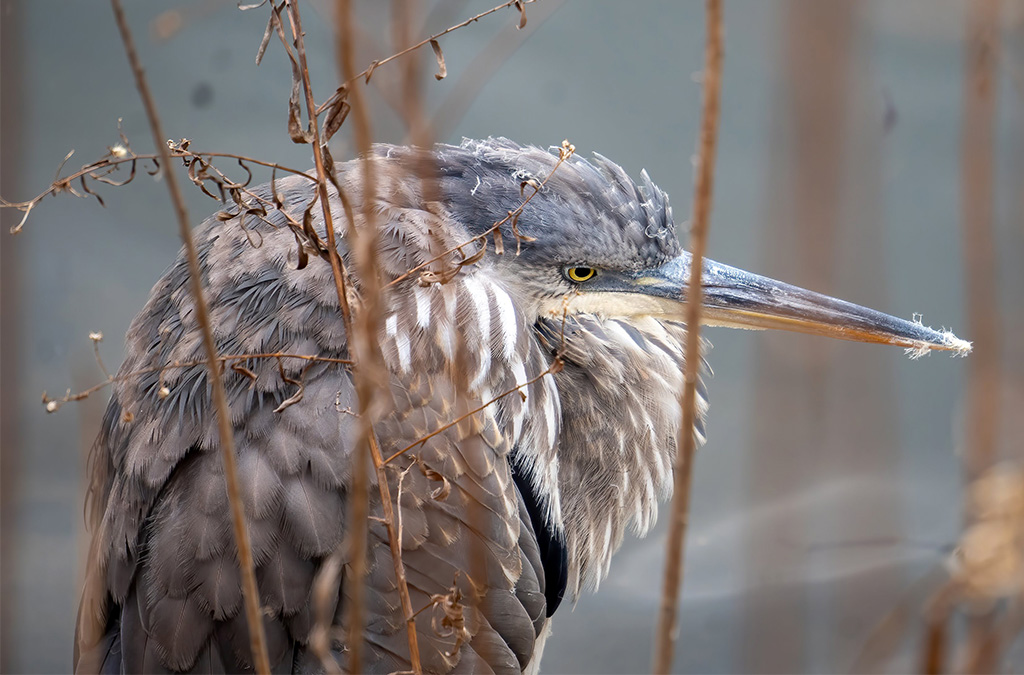 The first chick to hatch grows quickly and can become bigger and more aggressive than its siblings. By the time juvenile herons are 45 days old, they weigh about 90 percent of their adult weight. Young herons can fly after about 60 days, but return to the nest to be fed by the parents for another few weeks. Young, inexperienced herons strike at prey as often as their parents, but capture prey only about half as often. Only about half of young herons survive, due to starvation, falling out of nests, predators and being disturbed by people.

Parents stop interacting with their young at about the same time as fall migration begins, so it is not known if the young migrate south with their parents or on their own. 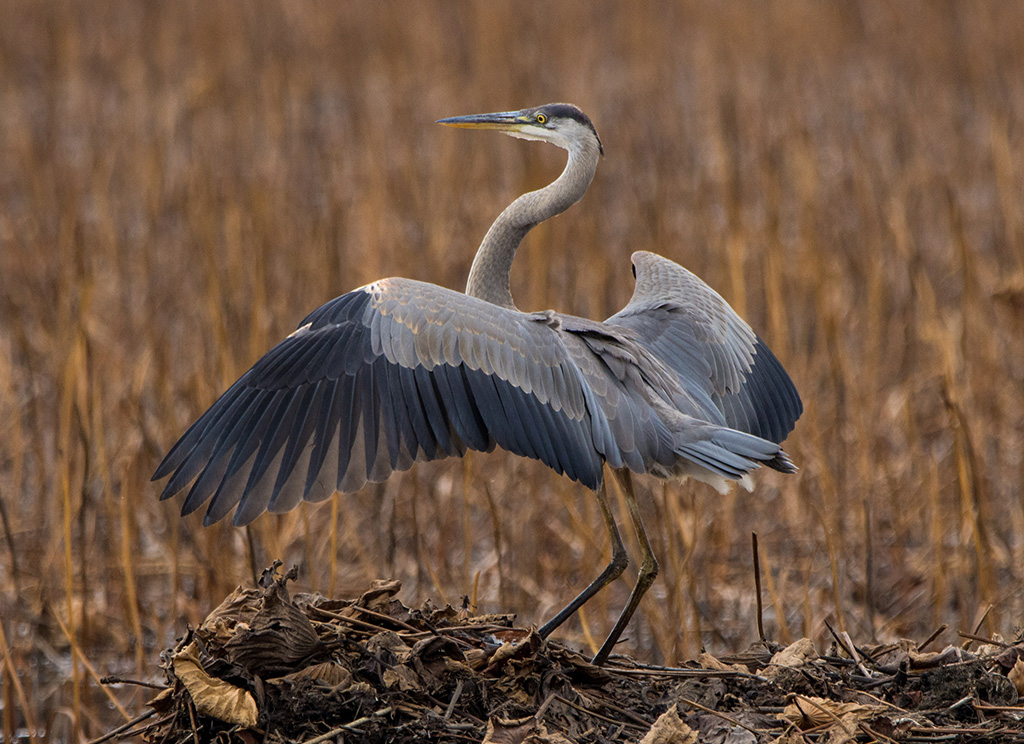 Great blues have a wingspan of up to 6 feet and are large – but with bones, weigh only 5 to 6 pounds. What looks like knees bending backward are actually their ankles, bending the same way as a human’s. (Photo: Richard George)

Great blue herons have special feathers on their breasts called powder down feathers. These feathers are not shed during molting; instead the feathers disintegrate at the tips but never stop growing. Great blue herons comb these feathers with a serrated middle claw to crumble the feather into a powder that they use like a washcloth to soak up water, fish and swamp slime, blood and oils from their feathers as they preen. Great blues also apply this powder to their underbelly to protect the feathers. The powder causes the slime or oils to clump up; the heron then brushes the clump away with a foot.

Although populations were once decreasing, great blue herons today are without a doubt increasing their range in Massachusetts. We have many that make their home here in Cambridge, and they are fascinating to observe. At Yates Pond near Alewife Station, people have observed this winter as many as a dozen great blues at one time lining the far edges of the shore. 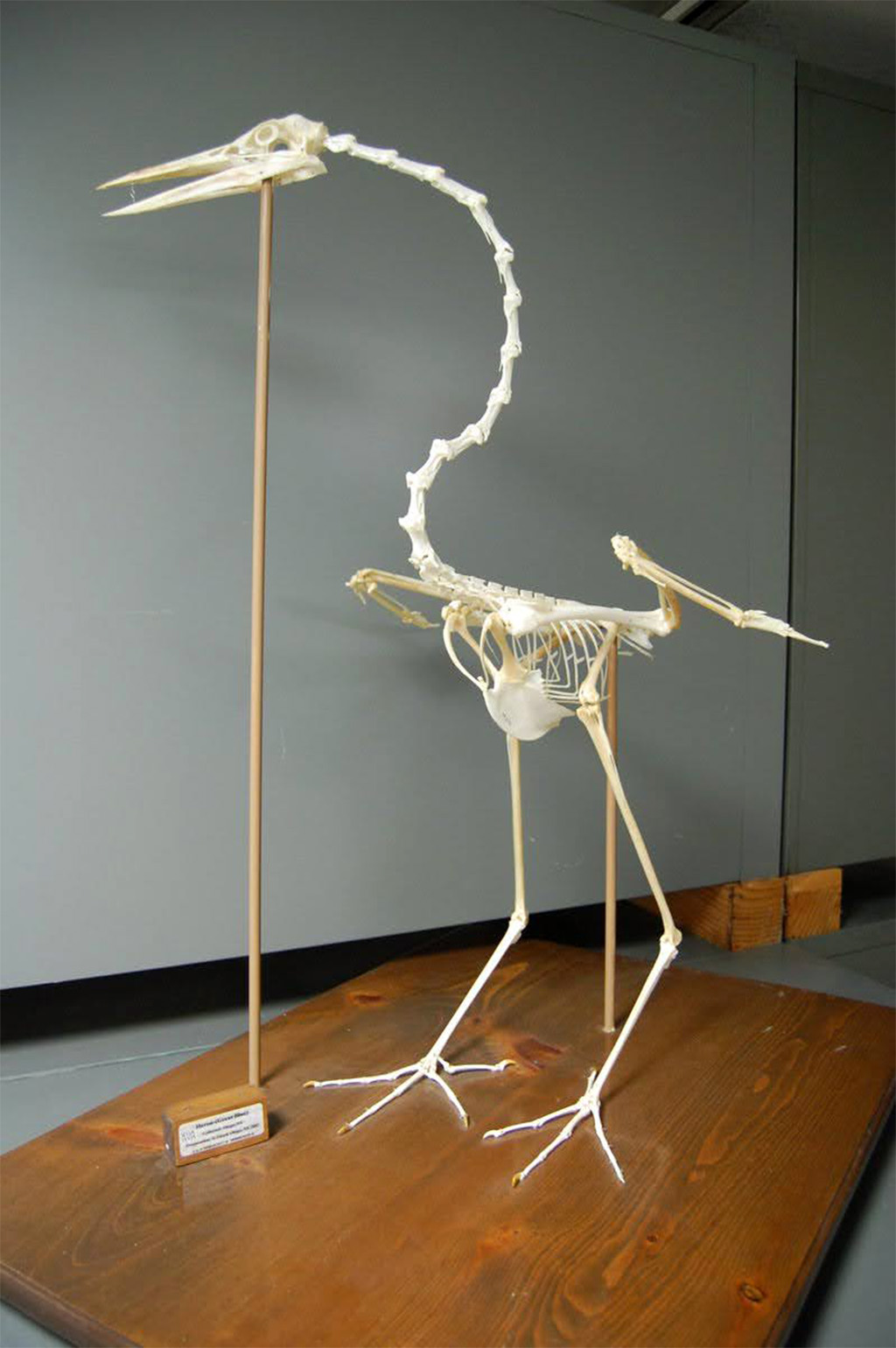 A great blue heron’s skeleton shows its knee joint near the wing, where it would be hidden by feathers. (Photo: New York State Museum via Twitter)