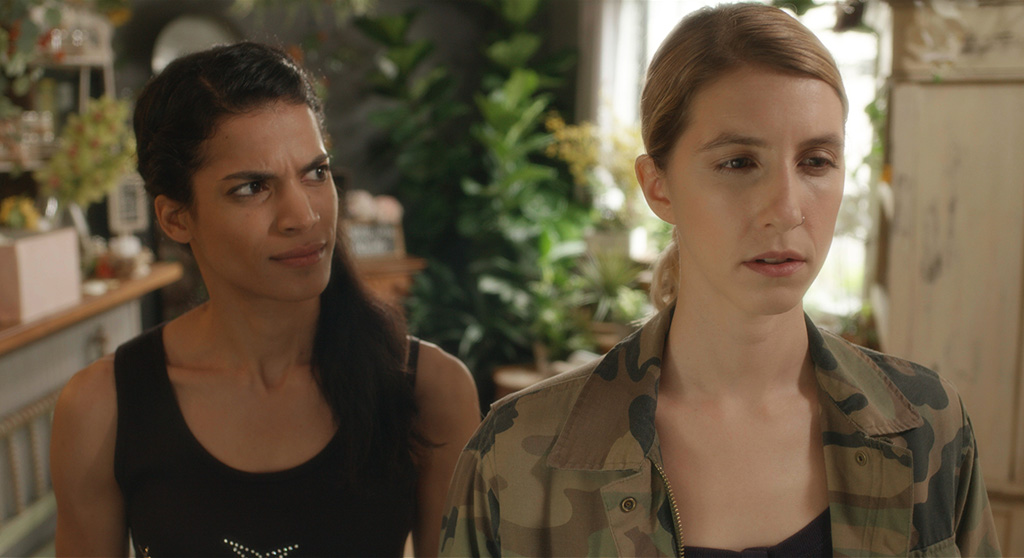 The Wicked Queer folk kick off Boston’s 38th LGBTQ+ Film Festival on April 7 in a hybrid format: In-person screenings take place through April 17 at The Brattle Theatre and in Boston at the Institute of Contemporary Art and Emerson’s Paramount Center; most films will be available online though the fest’s streaming portal until the end of “Gaypril.” This year includes 17 features, nine docs and a shorts programs (themed by sci-fi, Asian, Latinx and more) in which much of the material has an international flavor. Highlights include the locally shot lesbian rom-com “The Sympathy Card” (April 10, Paramount); the documentary “Being Thunder” about a genderqueer teen from the Narragansett Tribe in Rhode Island (April 16, Paramount); “Sirens,” detailing an all-girl metal band in Beirut (April 11 at The Brattle, with director Rita Baghdadi in attendance); “Three Tidy Tigers Tied a Tie Tighter,” revolving around the travails of three young folk in the dystopian future of São Paulo (April 15, Brattle); and “Being Bebe,” chronicling the ups and downs of the first winner of “RuPaul’s Drag Race” (Saturday, Paramount). There’s a small “throwback” slate of early queer classics that made mainstream inroads, “The Incredibly True Adventures of Two Girls in Love” (1992) and “I’ve Heard the Mermaids Singing” (1987) at The Brattle, on April 13 and April 16, respectively.

Closing out the “The Roots of ‘Mulholland Drive’” retrospective at The Brattle tonight is the 2001 David Lynch film at the core of it all, with the film’s singer-songwriter Rebekah del Rio in attendance. The event is sold out. If that leaves you jonesing for a big-screen Lynchian spin on “The Wizard of Oz” (which “Drive” is; The Brattle played the Dorothy-and-Toto black-and-white-to-color classic last week), you have an option at the Somerville Theatre on Tuesday. On Monday the DocYard presents “Three Shorts from Morgan Quaintance,” and then it’s on to the Wicked Queer film fest for the rest of the week.

This week’s “Face/Off” series flicks at the Somerville Theatre, in which we get one from John Travolta and one from Nicolas Cage, gives us “Look Who’s Talking,” the 1989 baby comedy costarring Kirstie Alley; and Cage in David Lynch’s 1990 romantic road movie homage to “The Wizard of Oz,” “Wild at Heart.” Both screen Tuesday.

A “Venom”-like spin from the Marvel Universe (but not Disney’s MCU) in which we drop in on an entity who’s more villain than superhero. Jared Leto (“Blade Runner 2049”) stars as Dr. Michael Morbius, a genius who suffers from a rare blood disease that disables him more each year. In his search for a cure he invents synthetic blood, wins the Nobel, pulls a Brando (turns it down) and ultimately finds the key to his malediction – but the cure is a curse. It turns him into a “living vampire” with super speed and strength, but he needs human blood to keep going. Like that “Twilight” nonsense, he tries to be a vegan vamp, though he’s mutilated a neat dozen or so by the time he scores a conscience. His buddy (Matt Smith, “Last Night in Soho”), ailing from the same disease, takes the serum too and is more than happy to munch on humans every day and all the time. From there “Morbius” becomes pat and predictable, with so-so FX that look like something from an “Underworld” flick from two decades ago. Leto’s magnetic, but the narrative stitching is frail and doesn’t have enough meat for the actor to bite into. Hold tight during the end credits: There’s a tease – or two – of what’s to come involving another A-list actor caught up in the bloodless nonsense. At Landmark Kendall Square Cinema, 355 Binney St., Kendall Square; Apple Cinemas Cambridge, 168 Alewife Brook Parkway, Cambridge Highlands near Alewife and Fresh Pond; and AMC Assembly Row 12, 395 Artisan Way, Assembly Square, Somerville.

“Everything Everywhere All at Once” isn’t the only recently released film about the troubles of an immigrant woman wrestling with cultural and family values while trying to fit into the U.S. mainstream. Nani Li Yang’s drama centering on Ai-Jia (Kathy Wu), a struggling writer in Los Angeles who supports herself as a tour guide for Chinese visitors, may not be a gonzo rush like the latest from the Daniels, but at its core it is about family, culture and generational clashes. The rub comes when Ma (Ah-Lei Gua) says she’s coming to L.A. with Ai-Jia’s teenage niece and nephew because their father and mother have gone to jail – the result of a corruption scandal. Ma’s not a fan of Ai-Jia’s American boyfriend (a generic Travis Goodman) and decides to play matchmaker. More heartfelt are the hardships facing the transplanted teens at school: Zheng-Qi (Demi Ke), a slightly rebellious goth, draws the attention of the popular boy as well as an introvert with troubles at home, while Zheng-Yu (Jiayu Wang) struggles with his sexual identity at school and under his grandmother’s scornful eye. The performance by the ensemble is affecting. The film has some nice moments of realization and occasional cross-cultural comedy; it’s something of a reverse-direction version of Lulu Wang’s 2019 “The Farewell.” On Amazon Prime Video.

You’ve gotta love the whimsical nostalgia imbued in a Richard Linklater film. Take “Boyhood” (2014), “Everybody Wants Some!!” (2016) and of course “Dazed and Confused” (1993), all reflective of Linklater’s boomer childhood in small-town Texas, as well as this little ditty about a 10-year-old alter ego named Stan (voiced as an adult by Linklater regular Jack Black) who’s recruited to test the space capsule and lunar module because, well, NASA messed up and made them too small; it needs someone to try them out while the right size is being cooked up for Neil, Buzz and crew. Sounds a bit batty, but this is a seamless blend of fantasy and a rocking, sentimental enshrining of music (“The Age of Aquarius,” “Soul Finger” and more), the space race and sense of 1960s Americana – Stan’s family’s obsession with “Dark Shadows” and other TV of the era is quite adroitly done. Did I mention it’s an animated film? It’s done with rotoscoping, the same technique Linklater applied in “Waking Life” (2001) and “A Scanner Darkly” (2006), in which live-action footage is painted over. The film’s a neat bridge for children from a coming-of-age and fantasy standpoint, as well as for mom and dad – or more so, grandma and grandpa – for the dial-back factor. You can feel the care and love the filmmaker has put in. On Netflix.

Nothing’s worse than a laborious comedy seeking a laugh you’re not feeling. That’s the case here with this slack Covid-lockdown tale about a film crew making the sixth or seventh sequel in a franchise known as “Cliff Beasts” about dino-raptor-avians who munch on people, much the same way those things got at Meryl Streep’s self-centered POTUS at the end of “Don’t Look Up.” The film centers on a married couple (Leslie Mann and David Duchovny) who are the stars of the series, with Fred Armisen as the indie auteur who won Sundance with a film shot on his iPhone, now frustrated with a big budget, meddling producers (Kate McKinnon and Peter Serafinowicz) and big egos. It’s therapeutic to look at the process of maskless actors with a masked crew on the other side of the lens, reminiscent of the set shots making the rounds when “Don’t Look Up” was made here mid-pandemic, and fun to drink in the green screen, CGI, behind-the-scenes magic and shenanigans. The film’s helmed by Judd Apatow (Mann’s husband), who’s scored better on the funny bone tickle meter with fare such as “The Forty Year Old Virgin” (2005) and “Knocked Up” (2007). This concept doesn’t quite rise to the promise of its deconstructive premise. On Netflix.