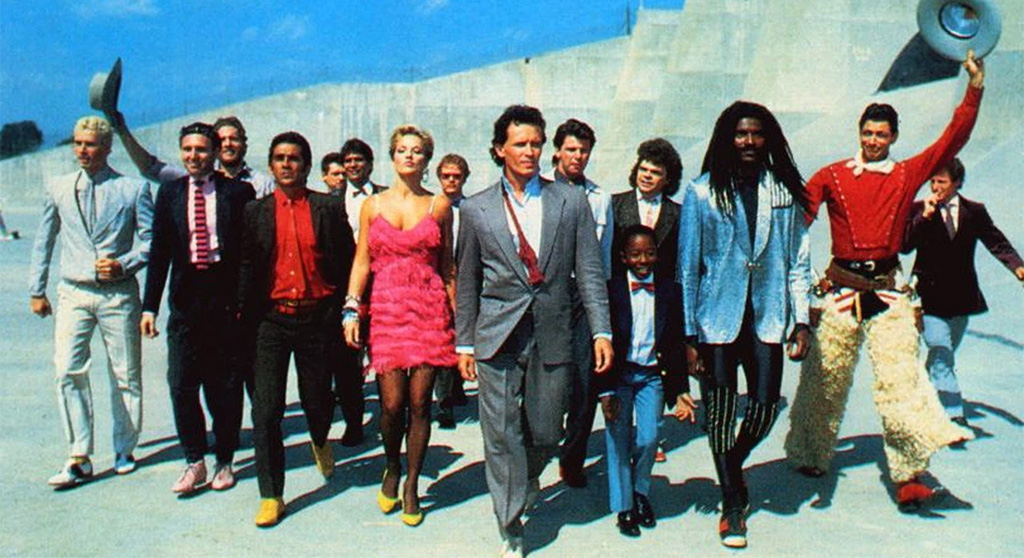 The Brattle turns back the clock to the big hair era with its “Let’s Hear it for 1984” program. Titles this week include the quirky, wacky sci-fi adventure “The Adventures of Buckaroo Banzai Across the 8th Dimension” on Sunday; “Stranger Than Paradise,” the also quirky (it’s a sub-theme!) seminal film that’s come to define the career of Jim Jarmusch, playing Wednesday; “Paris, Texas.” Wim Wenders’ tale of brothers and the woman between them (Harry Dean Stanton and Dean Stockwell, who both recently died, starring alongside Nastassja Kinski) on Thursday; the raucous “don’t feed him after midnight” cute-critter-gone-devil-dog flick “Gremlins” on Friday; and “Night of the Comet” on Saturday.

On Monday, The DocYard runs Jessica Beshir’s “Faya Dayi,” a spiritual journey into the Ethiopian highlands of Harar and rituals employing khat, a leaf Sufi Muslims chew for religious meditations that is Ethiopia’s most lucrative cash crop. For “Weird Wednesday,” The Brattle shows a restoration of the 1971 cult staple “The Velvet Vampire” directed by Roger Corman protégé Stephanie Rothman. Dune buggies, rattlesnakes and hippies make their way into a bloodsucking mix that would make a devilish double bill with “The Love Witch” (2016).

Like bikes, like film? How about combining the two? The 20th version of the Bicycle Film Festival of Massachusetts, a series of shorts by, about and for two-wheel enthusiasts, rolls out virtually Friday and is available to stream through Jan. 3, presented in part by MassBike and Common Wheels.

A dark tale depicting the unholy union of organized crime, systemic corruption and gross classism in Brazil. To provide a better life for his rural family, 18-year-old Mateus (Christian Malheiros) accepts a job sorting scrap at a junkyard in São Paulo. Once he’s on site, his new boss, Luca (Rodrigo Santoro, “300”), strips Mateus and his friends of their papers and cellphones, essentially imprisoning the seven as forced labor. It turns out Mateus’ recruitment was a ploy, and Luca’s operations are part of a bigger human trafficking scheme. The twist comes midway when Mateus is offered a promotion to join Luca as a walking boss – in essence overseeing his friends. It’s not on par with Fernando Meirelles and Kátia Lund’s sharp and acrid “City of God” (2002), but compels in its own right. On Netflix.

Aaron Sorkin (“West Wing,” “The Trial of the Chicago 7”) takes a look at the dynamics between power couple Lucille Ball and Desi Arnaz, the comedy team behind the 1950s prime-time hit, “I Love Lucy.” As Ball, Nicole Kidman would seem an odd choice, but gives the role a game go even if she can’t rekindle Ball’s infectiously goofy zaniness. Javier Bardem feels a bit more shoehorned into the Arnaz role. The real spark comes from Nina Arianda as Vivian Vance and J.K. Simmons as William Frawley – aka the Mertzes. The arc focuses on a tense week of work from Ball’s point of view. Rewinds back to humble beginnings and struggles with producers and sponsors are packaged with a tabloid splash tagging a star as a commie to help round out the story, but get dropped in more as distractions than enriching backstory. Fans of the show understandably might not buy the portrayals, but the look behind the curtain of a 1950s television product and seeing Ball as a troubled yet vulnerable trailblazer very much intrigues. At Landmark Kendall Square Cinema, 355 Binney St., Kendall Square, and on Amazon Prime Video.

Riz Ahmed, so good in “Sound of Metal” (2020), puts in a yeoman’s effort in Michael Pearce’s thriller about an enigmatic Marine (Ahmed) who believes his latest secret mission is to thwart an alien invasion. Step one is to abscond with his two sons from a wife he believes is infected by an extraterrestrial virus; then comes a dash to safe ground while trying to avoid the increasing numbers of infected. Pearce’s narrative is all bait and switch, and about halfway in we learn there’s really no alien threat and that Ahmed’s Malik is a troubled soul suffering from PTSD and more. What rolls out the gate as a hot paced sci-fi thriller is really a profile of mental illness disingenuously dressed up as something it’s not. At Landmark Kendall Square Cinema, 355 Binney St., Kendall Square, and on Amazon Prime Video.

Documentarian Penny Lane (“Hail Satan?”) takes a look at lightly regarded jazz musician Kenny G, his life, career and sense of self. The saxophonist with indelible curly locks and a high forehead, as we are told over and over, is the all-time bestselling instrumentalist of all time, yet gets little respect for his “smooth jazz” music. Music scholars interviewed seem puzzled by his appeal, while fellow musicians are quick to laud his skills – he can sustain a note for an indefinite period through the hard-to-do technique of breathing in while breathing out. A relaxed Kenny G takes it all in stride, making Lane’s music doc an easy watch for those not fully in the know and a deeper delve into the man and his music for loyal fans. On HBO Max.

Adam McKay, who made mass financial misery fun to watch in “The Big Short” (2015) and extended his sense of devilish comedy with a spin on Bush VP Dick Cheney in “Vice” (2018), goes after climate change, product placement, government spin and the end of the world. “Look Up” is all over the place, but it has an amazing cast centered around doomsayer astronomers played by Leonardo DiCaprio and an angry Chicken Little Jennifer Lawrence who tell the president (Meryl Streep) the planet has six months until annihilation by a collision-course comet. The rest of that cast includes Cate Blanchett, Mark Rylance, Tyler Perry, Timothée Chalamet, Jonah Hill and Ariana Grande playing, respectively, a TV anchor who looks right off the set of “Bombshell” (2019), a cellphone company CEO, Blanchett’s co-host, a hipster, a White House staffer and a spoiled pop diva. The film has a bit of a tang of Mike Judge’s near-future satire “Idiocracy” (2006) with an “Armageddon” (1998) subplot in which a swaggering Ron Perlman leads a deep-space mission to thwart the streaking comet. At Apple Cinemas Cambridge, 168 Alewife Brook Parkway, Cambridge Highlands near Alewife and Fresh Pond, and on Netflix starting Dec. 24.