‘Everything Everywhere All At Once’: A soulful twist on the superheroic starring mom and dad 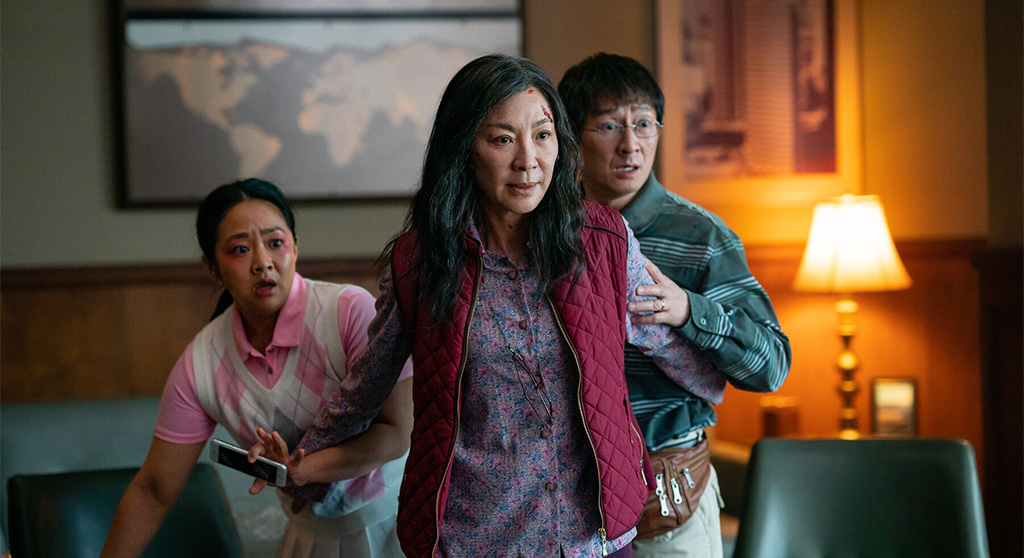 ‘Everything Everywhere All At Once’: A soulful twist on the superheroic starring mom and dad

The queen of martial arts, Michelle Yeoh (“Supercop,” “Crouching Tiger, Hidden Dragon”), rightfully takes center stage in “Everything Everywhere All At Once” as Evelyn, a middle-aged Chinese immigrant who’s much more. While juggling a tax audit, a visiting judgmental father and multiple family crises around the Lunar New Year, Evelyn discovers that she is the savior of the multiverse. Writers and directors the Daniels’ surreal sophomore feature following 2016’s “Swiss Army Man” succeeds in blending sci-fi, action, horror and comedy without neglecting the heart of the story: finding meaning in life through love and kindness to others.

The immigrant, the laundry lady, the bureaucrat and the desexualized Asian man often appear in the margins of other films. The Daniels’ elevation of them is a beautiful way to honor unsung pillars of society. They turned their moms and dads into flawed heroes, while the audit and the threat to the multiverse serve the same function of forcing Evelyn to assess her life and decide if she wants to stay the course, change or give up. It creates the possibility of redemption and renewal for her as an individual and as the family’s hand, a part of the sandwich generation. By healing herself in this epic journey, she can heal generational trauma.

Waymond (Ke Huy Quan, “The Goonies”), Evelyn’s husband and the heart of the family, complains that Evelyn’s attention gets pulled to other tasks before they can connect. The movie depicts Evelyn as being yanked out of her ’verse and into other Evelyns, unable to engage without distractions. Depending on the universe she visits, Waymond can be a seductive Wong Kar-wai leading man or an action hero. The Daniels’ countercultural depiction of gentle masculinity ranks up there with Mister Rogers, but even in his silliest incarnation, Waymond holds the key to helping Evelyn become the hero and stopping the Big Bad, Jobu Tupaki (Stephanie Hsu). The genre mashup provides a fuller insight into the characters’ personalities than a straight independent film could depict. The multiverse is a metaphor for the different facets of peoples’ potential and makes their internal lives literal.

Even though Jobu Tupaki is this film’s Thanos, the real villain is despair in the face of nihilism. If Evelyn represents failed hopes and dreams, Jobu Tupaki is the consummate success, given her seamless navigation of each ’verse – a gift from a genius scientist that also breaks her mind and spirit. Even abuse with good intentions is too high a cost for omnipotence, and the Daniels convey that achieving perfection should never be prioritized over nurturing, which is a theme that should strike a chord with first-generation Americans with immigrant parents who prioritized survival at a high psychological cost. The film models how to begin to mend broken souls and relationships; thus, saving the world.

The Daniels use bleak, bland office spaces as the backdrop for tense, epic battles, reminiscent of films such as “Mayhem” (2017) and “The Belko Experiment” (2016). While they embrace a surreal quality similar to Terry Gilliam’s work, their humor is less grotesque and cynical and more scatological and lighthearted. They never miss an opportunity to explore the absurdity of human existence by contrasting the heightened unfolding action with its trappings. This film is a love letter to everything from classic martial arts films and and “Hereditary” (2018) to “2001: A Space Odyssey” (1968) and “The Matrix” (1999) without becoming a parody. Their delightful ambition may make the movie longer than necessary, but with a list of producers that includes the Russo Brothers (“Avengers: Endgame”), it is forgivable to indulge when the opportunity presents itself. Bring tissues and prepare for side-splitting laughter.