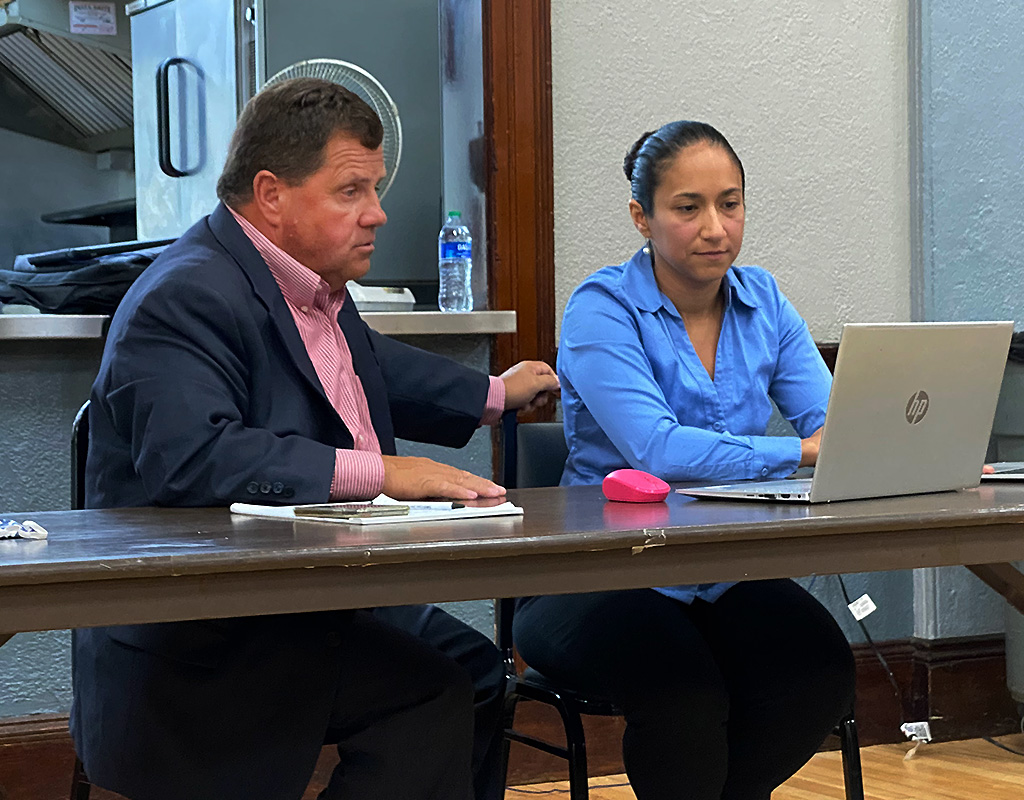 A meeting set for 6 p.m. Thursday plans to introduce Sugarloaf to neighbors – a third attempt by owner Flavia Hungaro to open in Cambridge after she walked away from locations in The Port and North Cambridge. The first site at 286 Broadway was a community-focused arts shop that Hungaro opted to let grow; the second was presented to her by the property owner as a storefront on Massachusetts Avenue being vacated by a small grocer. Instead, the grocer insisted it was staying.

“The community wanted to keep Food Land there, so we got out of the deal and tried to work it out to see if there was a way of splitting the space,” Sugarloaf attorney Walter Sullivan said Thursday. “In the meantime, other deals were being reached and Food Land ended up leasing the whole space.”

The next location being tried by Hungaro is at 19 Belmont St., the former Jackowicz Oriental Medical Therapy Associates, not far from Violette Wine Imports and the Sofra Bakery & Cafe.

But a little farther east is where The KG Collective is preparing to open its own recreational cannabis shop at 701-703B Mount Auburn St., West Cambridge, near the Star Market. “KG” stands for “Kush Groove,” a fashion and pot brand founded by Michael Pires and Marcus Johnson-Smith in 2011 for “city stoners” and the “new-age urban hippie.” A week-old online petition started by Johnson-Smith says the shop is “several weeks away from commencing business after over three years of city permitting, delays, Covid-19, construction and other circumstances outside of our control.” 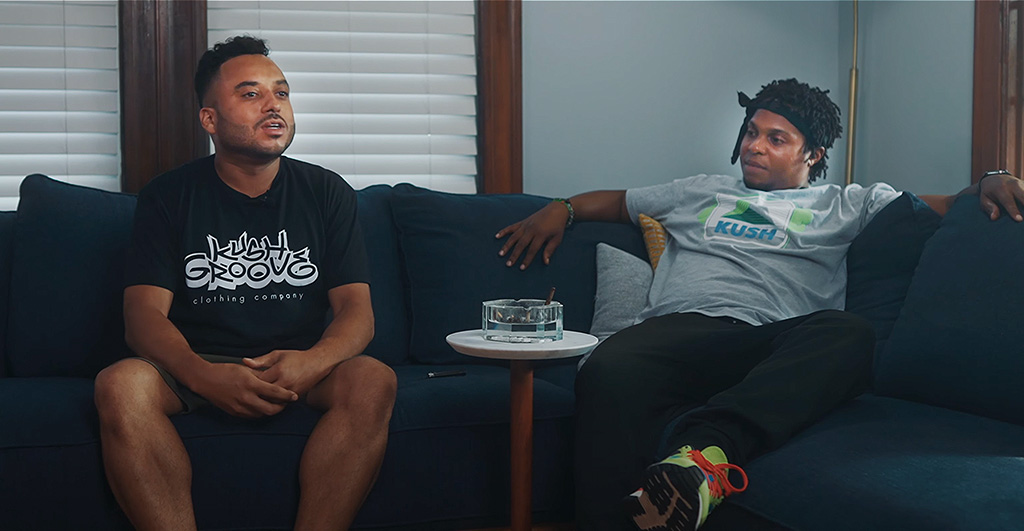 Michael Pires, left, and Marcus Johnson-Smith in a screen capture from a Kush Groove video.

The petition calls on signers to support KG Collective and its founders as locals and oppose Sugarloaf and Hungaro as outsiders. (Hungaro, a naturalized citizen from Brazil, lives in Belmont.) Though Kush Groove raises Sugarloaf’s proposed site of “less than 1,000 feet away from a school facility” as a problem, city zoning sets 301 feet as the closest a pot shop can be to a school. In 2019, school officials declined to oppose a proposed shop that would be roughly 400 feet from the King Open and Cambridge Street Upper School complex.

The KG Collective’s other objections to Sugarloaf are that “the neighborhood does not need two cannabis businesses” and that the competition is unwanted: “We need your support to let our representatives know that we oppose having an additional cannabis establishment 1,000 feet away from a cannabis business already permitted,” the petition says.

Such arguments have had mixed results in Cambridge.

The UpperWest wine bar was rejected by the License Commission for a Mid-Cambridge location in 2014 at the request of Stephen Kapsalis, owner of a nearby restaurant called The Cellar; he told commissioners that the competition would be “directly hurting me,” and the commission obeyed, pressuring UpperWest’s owners to back off. Commissioner Gerald Reardon, the city’s fire chief at the time, told the applicants that there were already “a lot of people around you that have paid a lot of money for these licenses, and it devaluates their license.” UpperWest was forced to try again in another location. (Kapsalis’ lawyer? None other than Walter Sullivan.)

The chairwoman of the commission at the time, Andrea Spears Jackson, wound up resigning before her contract ran out; Reardon and fellow commissioner Robert C. Haas, the police commissioner, have retired. 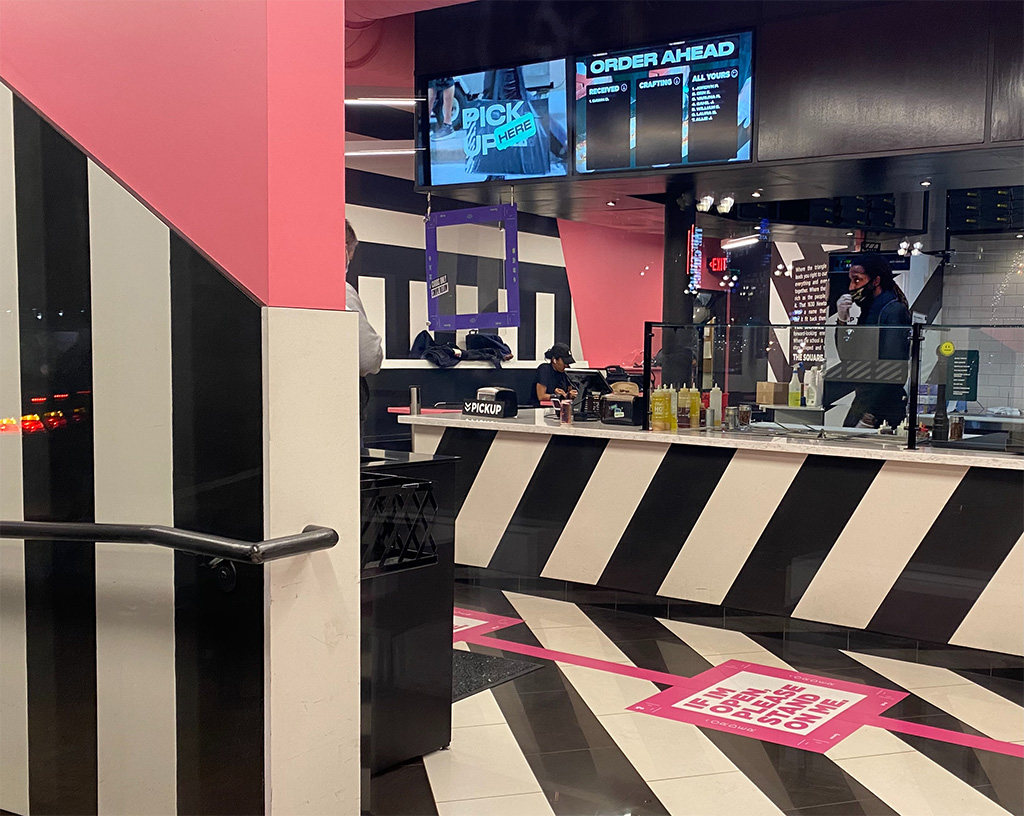 Zoning officials judged in 2017 that there was “need” for &pizza to open in Harvard Square. (Photo: Marc Levy)

When the &pizza chain sought in 2017 to come into Harvard Square, some residents argued that there was no need for more pizza in the area, despite the recent closings of Bertucci’s and Uno’s Pizzeria & Grill – both of which had operated within a block or so for decades. The &pizza request for a special permit from the Board of Zoning Appeal depended on showing “need.”

“You’re right, there are five pizza places” already in the square, said Denise Jillson, executive director of the Harvard Square Business Association. “There are six burger joints. There are 13 coffee shops with one more coming … There are three ice cream shops. There are six Mexican. Interestingly enough, there are eight eye care places … But there’s another one coming.”

The board wound up unanimously approving &pizza, which is around 350 feet from an Otto Pizza location that opened in 2011. The approval came even after &pizza antagonized the board with late filings and its attorney clashed with members and was accused of “insolence.”

During haggling with the board, a dessert seller named Milk Bar was given a part of the &pizza storefront instead of just being on the menu, but lawyer James Rafferty said the case for “need” was simpler. “I know we’ve been over this many times, the need to define ‘need’,” Rafferty said at the time. “If you were used to getting deep dish Chicago pizza at Pizzeria Uno, this isn’t what this is going to be. No one is doing that pizza in that form. That’s why we believe that it does meet the need.”