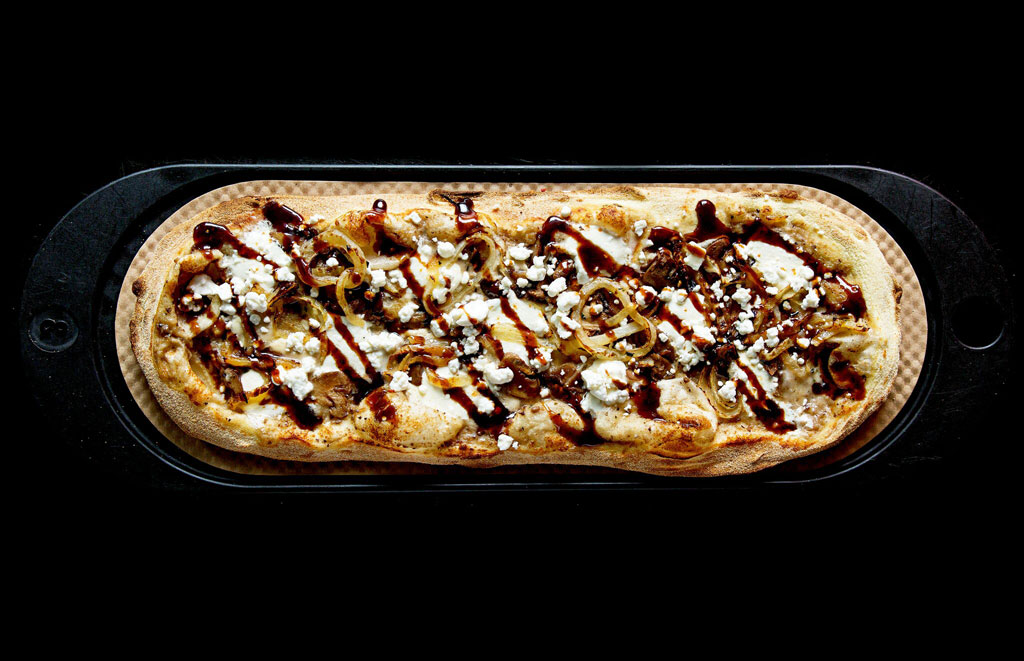 The pizzas at &pizza shops are oblong, not round, such as this Moonstruck, with mushrooms and goat cheese. (Photo: &pizza)

After nearly a year of permitting process and a dozen public meetings, the Board of Zoning Appeal said that it did. The board unanimously approved a fast food special permit Thursday for an &pizza (technically, for the whimsically named “IMA Pizza Store 21 LLC”) and attached bakery and drink shop.

“We’re pleased with the outcome and excited to bring the first &pizza × Milk Bar concept to Harvard Square,” &pizza said in a statement. “We will continue to be conscientious in our approach to what we can offer the square to add to its rich cultural identity. “

In the meantime, the 1-8 Brattle St. storefront – the “100 percent corner” of Harvard Square, in the words of Planning Board member Tom Sieniewicz – has been vacant, attracting homeless who camp outside it throughout the day. The historic building around it has been put up for sale for $25 million. And the nearby Pizzeria Uno has closed forever, while The Just Crust pizzerias has been closed “for renovations” since mid-July.

Thursday’s approval came at 10:37 p.m., three and half hours after the meeting started – or eight months and 23 days after the Washington, D.C.-based pizza chain was first turned down by the Cambridge Historical Commission when it sought to add a trellis to the front of the building at the former site of the Tory Row restaurant and Nini’s Corner newsstand. And that was before appearing at the zoning board for a special permit, required for businesses doing more than 20 percent of food sale revenue.

Two of the requirements are discretionary and used to fight &pizza: that the design and color be sensitive to the visual characteristics of Harvard Square; and that it “fulfills a need for such a service in the neighborhood or in the city.” Both criteria leave ample room for interpretation, and many opponents said Harvard Square already had enough pizza.

The rendering of approved designs for 1-8 Brattle St., with “black cherry” awnings for &pizza and white for Milk Bar.

&pizza was turned down in April, with three of the required four votes of the five-member board, and normally that’s the final word for two years. But the rules allow a “repetitive petition” with consent of the Planning Board, which is not normally involved in these permits, and a finding by the zoning board that the new proposal specifically addressed the reasons for the prior denial.

This doesn’t happen very often, and nearly every person and board involved in the process had a different understanding of what it meant.

Although the law gives the Planning Board no restriction on its consent, it chose to apply the zoning board’s standard: “specific and material changes in the conditions upon which the previous unfavorable action was based.”

At Thursday’s zoning board hearing, opponents asked the board to find the petition was repetitive – but of course it was; the question was whether it made changes addressing defects in the previous version. 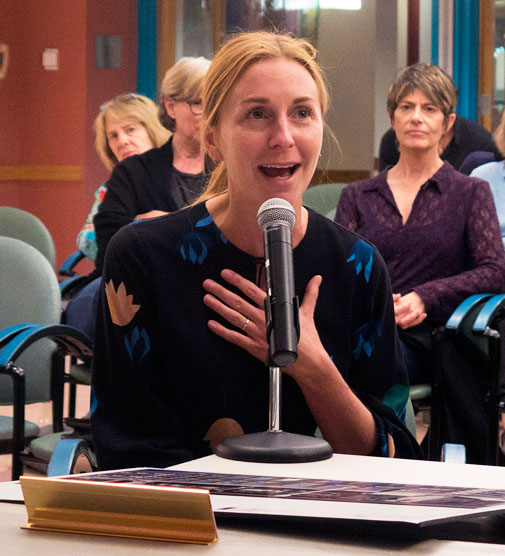 Christina Tosi, founder of Milk Bar, explains Thursday that she runs a “quirky American-style bakery with items that bring you joy and delight.” (Photo: John Hawkinson)

The zoning board split the hearing into two parts: whether changes to the proposal were sufficient, and whether to grant the special permit. Most of the time was taken up by &pizza’s presentations and public comment. By the time it got to the board’s discussion, most members seemed happy to vote and move on.

&pizza was represented by James Rafferty, a prominent Cambridge permitting attorney. Rafferty brought along Christina Tosi, the founder of Milk Bar, as well as Drew Murphy, the &pizza executive who has been shepherding the yearlong process. Rafferty replaced a varying group of attorneys from McDermott, Quilty & Miller who had represented &pizza when it was rejected by the Historical Commission and zoning board, and at all the meetings in between.

“The fact is, a bakery as part of the premises was told to us before –” Alexander said.

“No, Mr. chair, that is not correct!” Rafferty interrupted. “[Ms. Tosi] was never operating a bakery!”

Ultimately, Rafferty was able to convince the board that the April proposal involved &pizza selling two Milk Bar items, while the current proposal has Milk Bar running a fully fledged desert bakery in the space.

Tosi told the board that she’d learned in nine years of running a bakery that “you have to sell a lot of cookies to pay the rent,” and that while she would have loved to come to Harvard Square on her own, she needed only 250 square feet, and that was not viable without a partner.

Rafferty also told the board that instead of selling breakfast pizzas in the &pizza portion of the store, as had been suggested in the previous application, Milk Bar would open at 7 a.m. and serve breakfast; the &pizza portion will open at 11 a.m. Both will close at 2 a.m.

Board allows hearing to proceed

At public comment, four people spoke in favor of &pizza, including Denise Jillson, executive director of the Harvard Square Business Association, who compared &pizza × Milk Bar to the collaborations between Cabot Candy and Zinnia Jewelry at 1300 Massachusetts Ave., and to the Thread & Shape brow salon inside the Leavitt & Peirce tobacconist at 1316 Massachusetts Ave.

Six people asked the board to find against &pizza: “It is cosmetic at best – and I wouldn’t interpret cosmetic as significant,” said James Williamson.

Board deliberation was quick and to the point. Brendan Sullivan, who had last time voted against the proposal out of concern with its black-dominated appearance, spoke succinctly: “I believe there are material changes and the proposal before us is far different than the one before us in April.”

Hearing on the merits

The board took up the special permit proposal at 9 p.m.

Rafferty described the changes to the proposal, after the Planning Board has asked them to work closely with city staff. Charlie Sullivan, executive director of the Historical Commission, had “challenged” them to “consider a color they don’t have any affiliation with,” Rafferty said. The new proposal has black cherry awnings for &pizza (instead of their corporate black) and white for Milk Bar (instead of pink and white stripes). “We spent an enormous amount of time studying this,” he said. The new design separates the awnings over the Tory Row and Crimson Corner spaces, and exposes more of the historical marble of the Brattle Building.

“I know we’ve been over this many times, the need to define ‘need’,” Rafferty said. “If you were used to getting deep dish Chicago pizza at Pizzeria Uno, this isn’t what this is going to be. No one is doing that pizza in that form. That’s why we believe that it does meet the need.”

“To me the choice is [this or] another empty storefront for another year,” said Laura Donahue, proprietor of Bob Slate Stationer. “I see the visitors all summer coming out of the T … wondering what the heck is going on.”

“I think this is going to look very appropriate for Harvard Square,” said Edward Hoff.

In opposition, Marilee Meyer said she resented the “festival of youth” comments. “Are we going to continue to cater to the millennials?”

Pebble Gifford, founder of the defunct Harvard Square Defense Fund: “I am against the fact that this corner is going to be taken over by a pizza operation, for the simple reason that this is the heart of Harvard Square.” 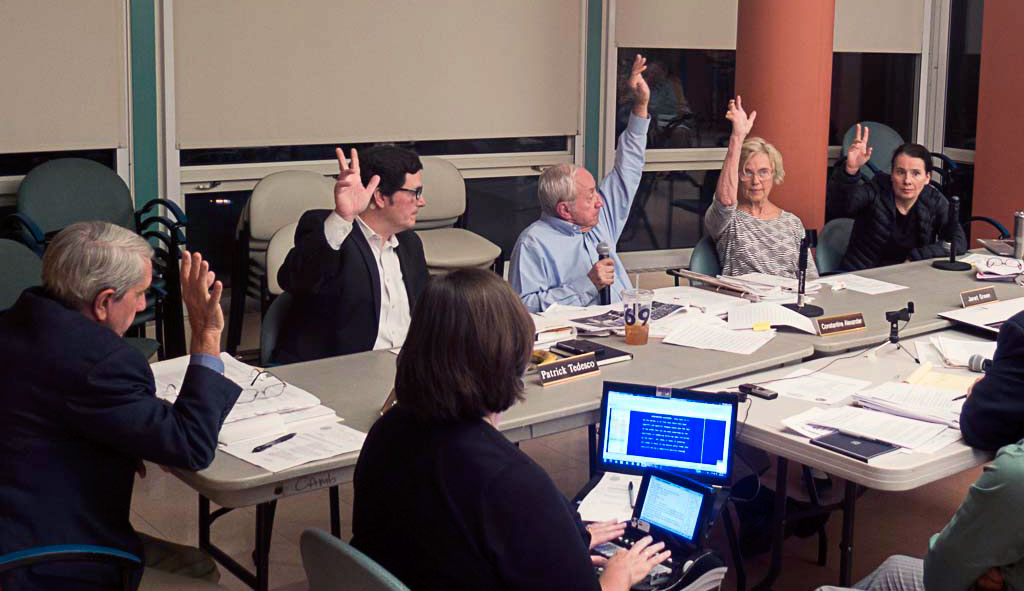 Although the board did not dwell overlong after public comment, it did set conditions on the special permit.

First, that the appearance be as shown on the plans submitted, with the amount of black “not materially increased.”

Second, that if &pizza’s partnership with Milk Bar should fall through, &pizza would need to return to the board for a new special permit unless it found a similar “independent” bakery to provide substantially the same products.

Third, that signs comply with zoning and that hours be maintained from 7 a.m. to 2 a.m.

Fourth, out of a concern over traffic and potential parking in the adjacent “super crosswalk” on Massachusetts Avenue, that no delivery be permitted, including third party or contract delivery.

Fifth, that there be no “sandwich board” or A-frame signs on the sidewalk.

The permit becomes final after a decision is written up and signed and a 20-day appeal period ends, likely some time in November.