by Leslie Brunetta for the Cambridge Black History Project | May 4, 2022 | Issues | 0 comments 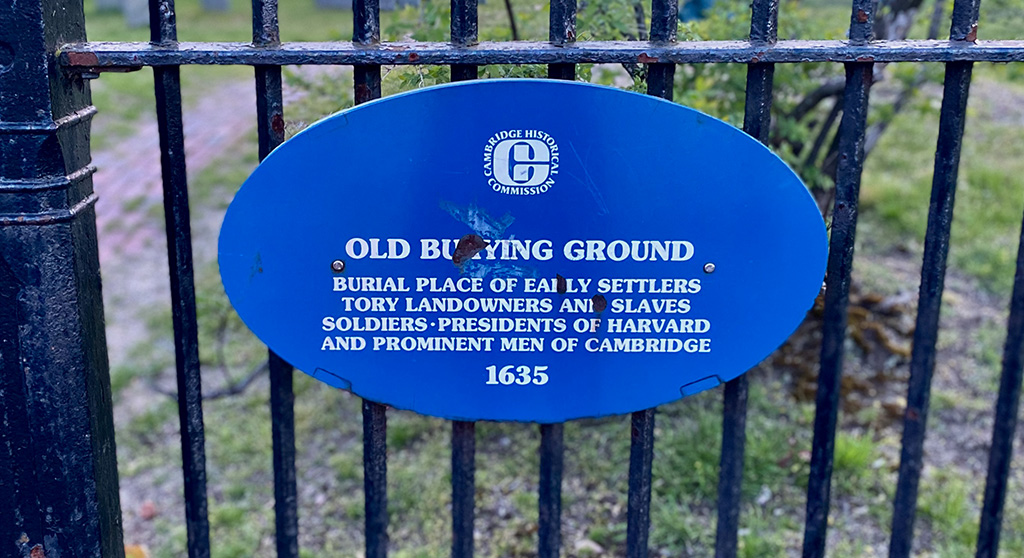 How could a ‘laborer’ amass such a fortune – then be forgotten?
By Leslie Brunetta for the Cambridge Black History Project

“SUDDEN DEATH,” read an item in the Feb. 7, 1852, Boston Evening Transcript. “Charles Lenox, a colored man, and for many years past the porter at Old Harvard, dropped down dead at his residence in Cambridge a few days since. He was about 60 years of age, and leaves to his family a fortune of about $20,000.” At a time Harvard paid its president an annual salary of about $2,500, the size of Lenox’s estate was definitely newsworthy.

Most Cantabrigians of the time likely knew Lenox. He was the son of a Revolutionary War veteran. He worked at Harvard. He owned a substantial house in Old Cambridge, the area centered around the college. He appears fleetingly in a few famous men’s memoirs and probably in the archives of others. Yet if you read any of the standard histories of our city, you’ll find no trace of Lenox except in a list of 1822 taxpayers. It’s hard not to suspect that his erasure is related to the fact that he was Black.

There are no known surviving portraits of Charles Lenox. Vital records collections and census returns give some barebones facts of Lenox’s life. He was born in Newton about 1781 to Cornelius and Susannah Toney Lenox. He had many siblings. In 1811 in Cambridge, he married Seney Rogers, whose name is sometimes given as Aseneth and sometimes Cinthia, the name it seems she preferred. They lost a 4-week-old child in 1813. The 1820 federal census shows Charles as head of a household also including a “free colored” woman aged between 26 and 45, presumably Cinthia, and girl younger than 14. In October 1822, Charles and Cinthia’s 2-year-old daughter, Eliza, died – she was probably born in 1820 after the census was taken. They don’t appear to have had any children after Eliza.

In 1823, “labourer” Charles paid “yeoman” Richard Richardson of Ashby $500 for the land and house then standing at 20 South St. in Cambridge.⁠ He wasn’t the first Black man to buy real estate in Cambridge, but his house was the most impressive and centrally located of the properties we know were owned by Black people. 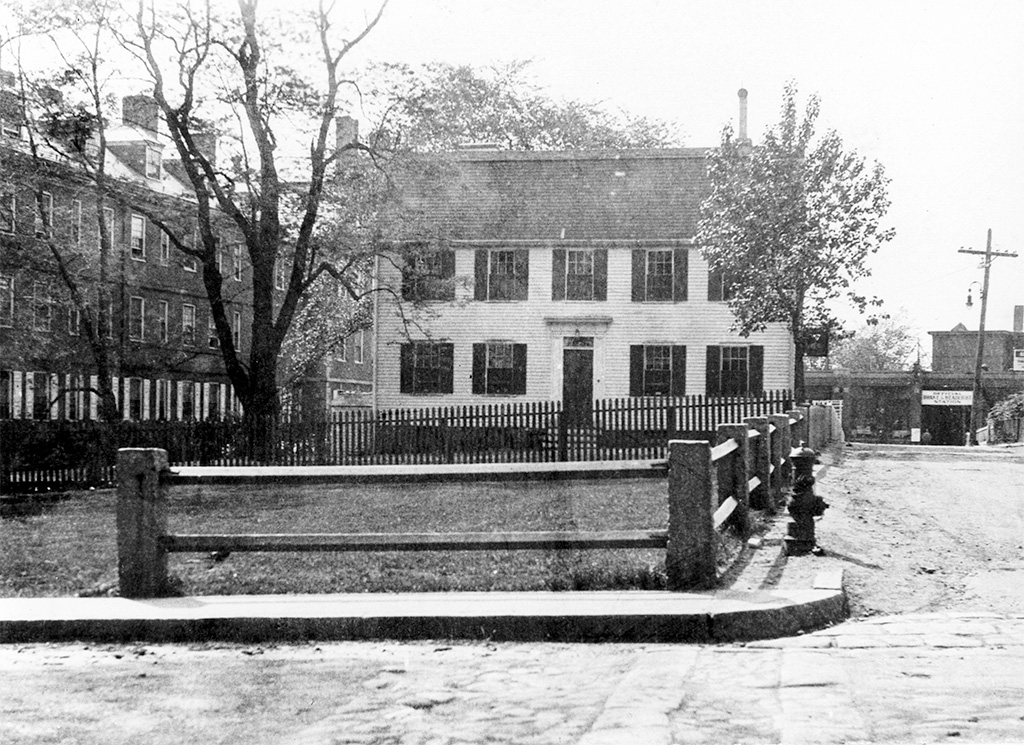 The sole living child of Charles and Cinthia, Susan – probably named after Charles’ mother and likely the girl noted in the 1820 census – died in Cambridge in 1837 at age 22. At that time, there were only two gravestones in the Old Burial Ground memorializing Black people. The first marked the grave of “Cicely, Negro, late Servant to ye Revd. Mr. William Brattle. She died April 8. 1714 being 15 years old.” The second marked the grave of “Jane a Negro Servant. to Andrew Bordman Esquire Died 1740 Aged 22 years & 3 Months.” Now, nearly 100 years after Jane’s death and about 50 years after the lawsuits that led to judges deciding slavery was unconstitutional in the Commonwealth, a third stone was erected. Like Cicely’s and Jane’s stones, Susan Lenox’s stone is elaborately carved. But it is much larger and the words on it, still clearly legible, could hardly be more different: “Sacred To the Memory of Miss Susan F. Lenox, Daughter of Mr. Charles & Mrs. Cinthia Lenox, Died April 16, 1837, AEt. 22.”

Susan was not the third Black person buried in the Old Burial Ground; we know from records that many other Black people, including her siblings, had died in Cambridge since the 1600s, and the Old Burial Ground was the only cemetery for Cantabrigians until the early 1800s. Like many white people, these deceased either never had headstones or their stones weren’t substantial enough to survive weather and vandalism. Besides expressing their grief and affection for their daughter, the Lenoxes were saying to Cambridge with Susan’s head- and footstone – as with their house on South Street – that We are people of means and we are claiming our place among the best of you. We will be remembered. 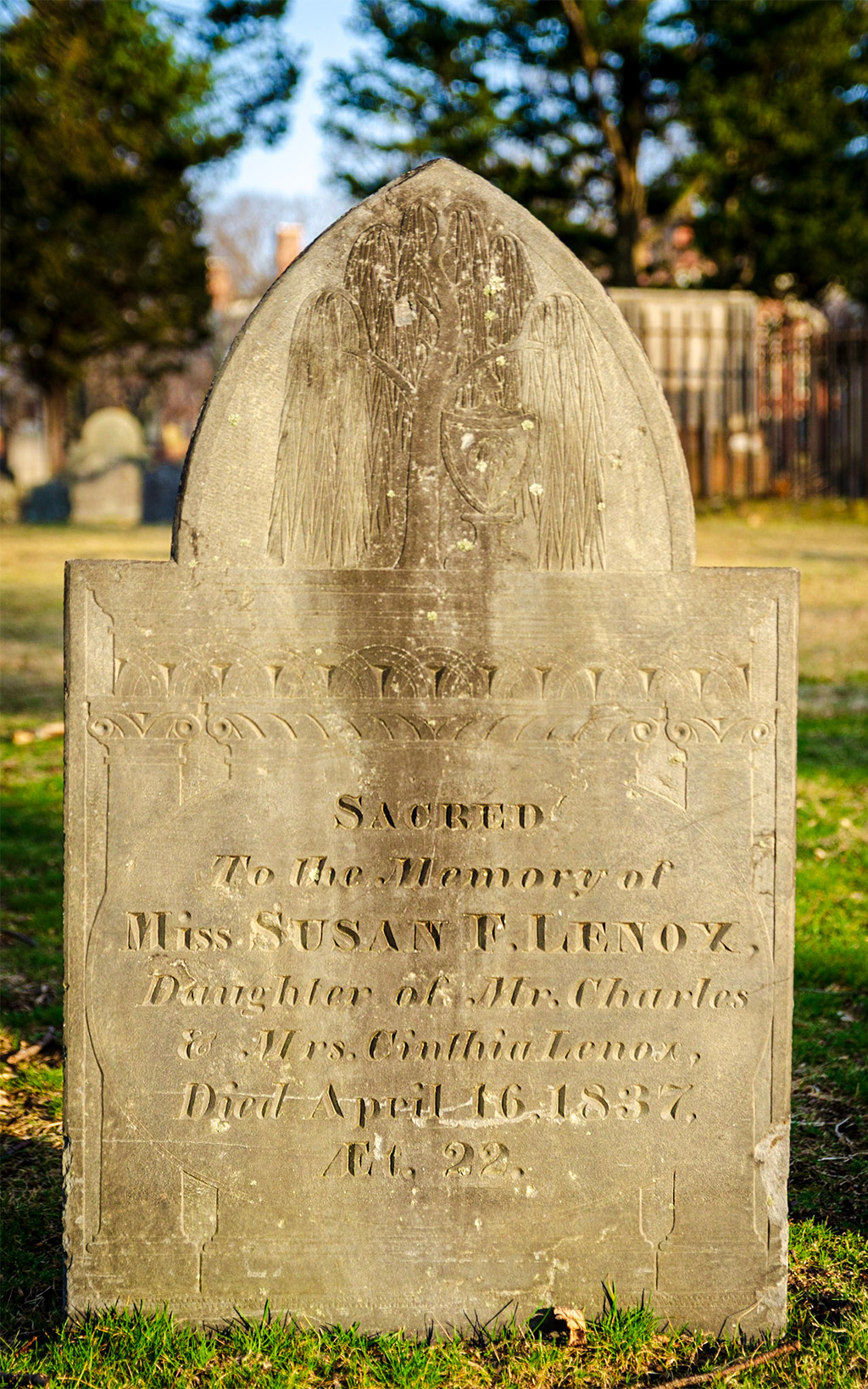 Susan Lenox’s headstone in the Old Burial Ground. Her grave also has a footstone with her name engraved on it. (Photo: Copyright 2022 Peter Loftus)

In 1839, Cinthia died, aged 46. The 1840 census found Charles living with two female “free colored persons” aged between 55 and 100, perhaps his mother, who died in Cambridge in 1843, and one of his sisters. The 1850 census, the first to list all individuals by name, states that Charles is a waiter and his house is worth $2,000. Living with him are 30-year-old Mary Lewis and 9-year-old Susan Jackson, both born in Massachusetts; whether these are relatives, friends or boarders hasn’t been determined. In September 1851, 70-year-old Charles, described again as a laborer, was married to 34-year-old Martha Dickerson of Watertown by Lucius R. Paige, who was then city clerk and later wrote “History of Cambridge, 1630-1877.” Martha’s father, Robert, was a mariner in Salem, and Charles’s brother, John, had decades before married into the Dickerson family.

Just four months later, on Feb. 1, 1852, Charles died in Cambridge of “disease of the heart.” His occupation was described, once again, as laborer.

Unlike a number of his Black Cambridge and Boston contemporaries, including, for example, members of the Lewis family, Charles Lenox seems not to have appeared in newspaper articles during his lifetime. While others made their names via various forms of church, political and community organizing, Lenox kept a low profile.

But with his death, he suddenly hit the news. The fact that a Black man could have such a fortune was so newsworthy that the Transcript “SUDDEN DEATH” item was copied outside Massachusetts, including in New York papers such as the Times and Tribune.

How could a laborer or waiter amass such a fortune? And why would such a success story be so forgotten? Until very recently, no one – including people who know most about Cambridge’s history – even knew that Susan’s beautiful headstone belonged to a Black family. It takes a lot of digging through old books to get beyond the bare bones of Charles Lenox’s story, and you’d have to be looking for him purposely to find them.

What one finds are three possible, interlocking reasons for why he has been forgotten.