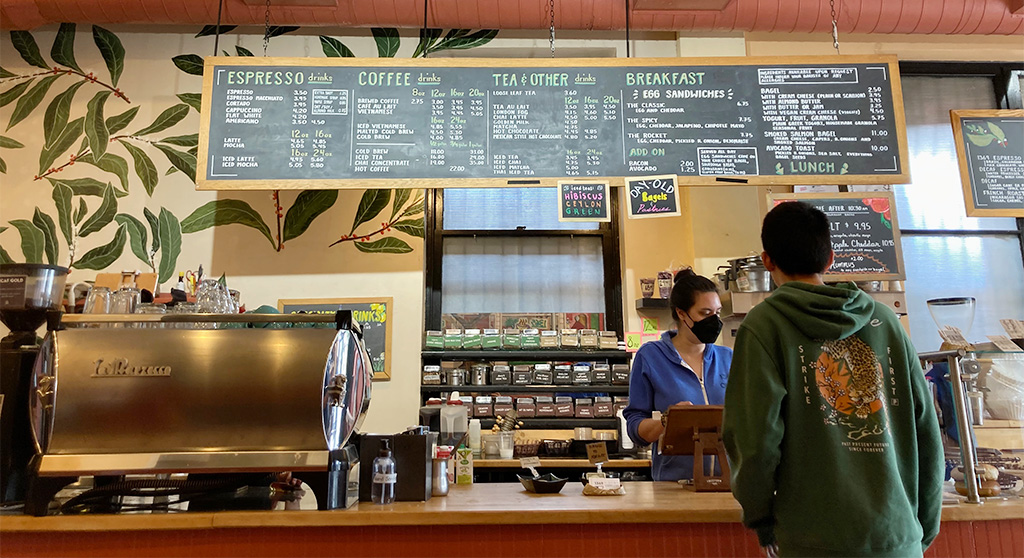 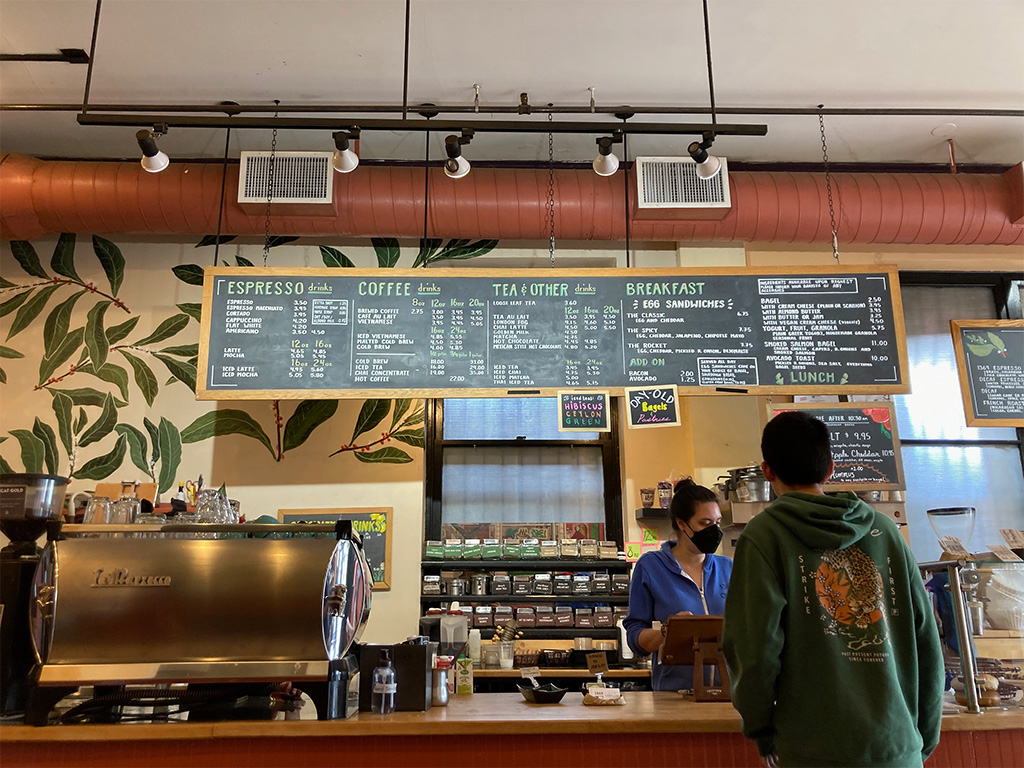 A barista serves a customer at 1369 Coffeehouse on Friday in Central Square. (Photo: Nicholas Miller)

A wave of labor organization among Cambridge and Somerville cafés could expand this month as employees of 1369 Coffeehouse in Central and Inman squares decide in a National Labor Relations Board election whether to unionize.

The vote, which began June 1, comes exactly a year after employees of Pavement Coffeehouse, a café with eight shops across the Boston area, including one in Harvard Square, sent a letter to owner Larry Margulies declaring their intention to become the first unionized coffee shop in Massachusetts.

Since then, workers at two other local cafés, Darwin’s Ltd. with four Cambridge locations, and the Somerville sister shops of Diesel Café, Bloc Café and Forge Baking Co. and Ice Cream Bar, organized.

All four unionization efforts have been organized by the New England Joint Board of Unite Here.

The spike in coffee shop organization follows a period in the pandemic that employees say illuminated the importance of their labor, leaving them seeking greater power and stability at their cafés.

Food service workers “are constantly being shown by the industry and [the public] that [they] are disposable, that anyone can do [their] job,” said Emma Delaney, an organizer for NEJB and a former Pavement employee. But their work providing services at the height of the pandemic showed that they are “100 percent essential workers,” she said. 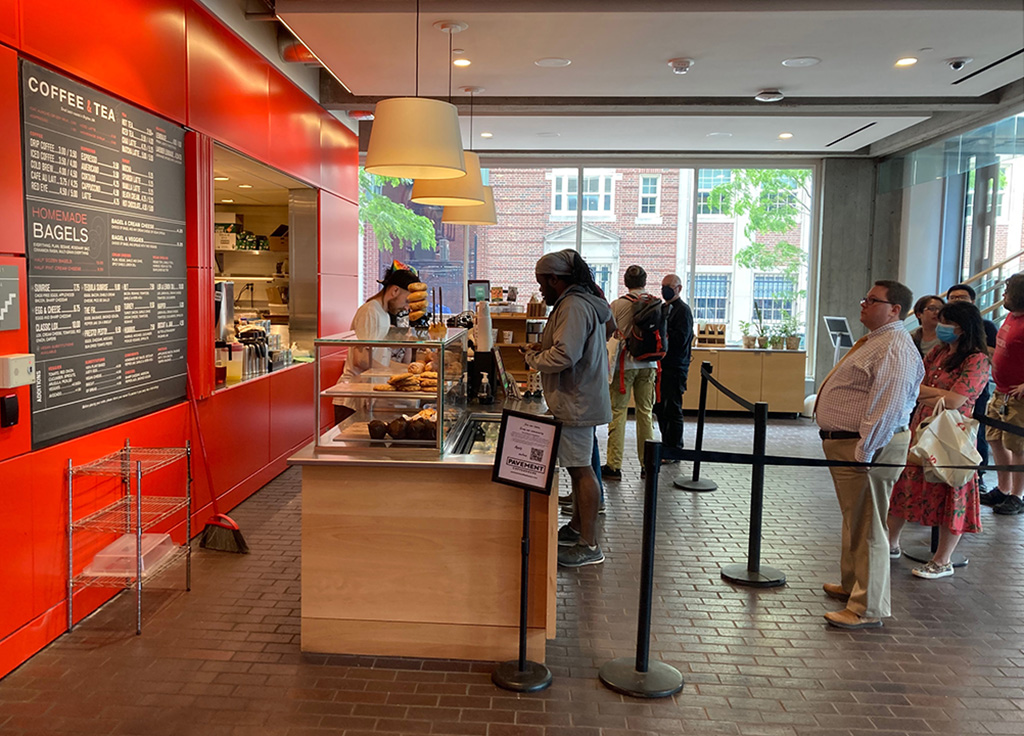 Pavement Coffeehouse, which has a shop in Harvard Square, has a recognized union and some tentative labor agreements. (Photo: Nicholas Miller)

Unlike 1369’s management, the owners of the other three chains voluntarily recognized their employees’ union, bypassing the election process. The ownership at 1369 declined to do so because it wanted every employee to have the chance to weigh in through an election, owner Joshua Gerber said.

At Pavement, labor negotiations since the union was recognized have resulted in several tentative agreements, but economic questions still need to be resolved, said shift leader Mary-Kate McGeary, a member of the union’s negotiation committee.

McGeary said the union has sought a livable wage that doesn’t include tips, “a strong, inclusive health care plan,” paid time off and stronger Covid protocols.

The company’s Covid regulations have been insufficient, McGeary said, citing the lack of a vaccine requirement for employees and policies that instruct workers to continue showing up if they have symptoms or have been exposed unless they test positive.

Eoin Jaquith, a barista at 1369, said the unionization effort there stems from employees’ desire for their jobs to potentially become long-term careers, rather than temporary professional stopovers. “This is the best job I’ve ever had, and I want it to be sustainable for me,” he said.

More specifically, workers are looking for greater transparency in how the company spends its money and in regard to compensation and advancement for employees, Jaquith said. He specifically emphasized the importance of employees knowing what financial incentives exist for being trained, promoted or for staying on longer.

Another focus for workers at 1369 is just-cause firing. A May 20 tweet from @1369United, the union campaign’s Twitter account, alleged that an employee was “wrongfully terminated on exaggerated & unsubstantiated claims,” adding, “We … believe this was motivated by her local support of unions.” 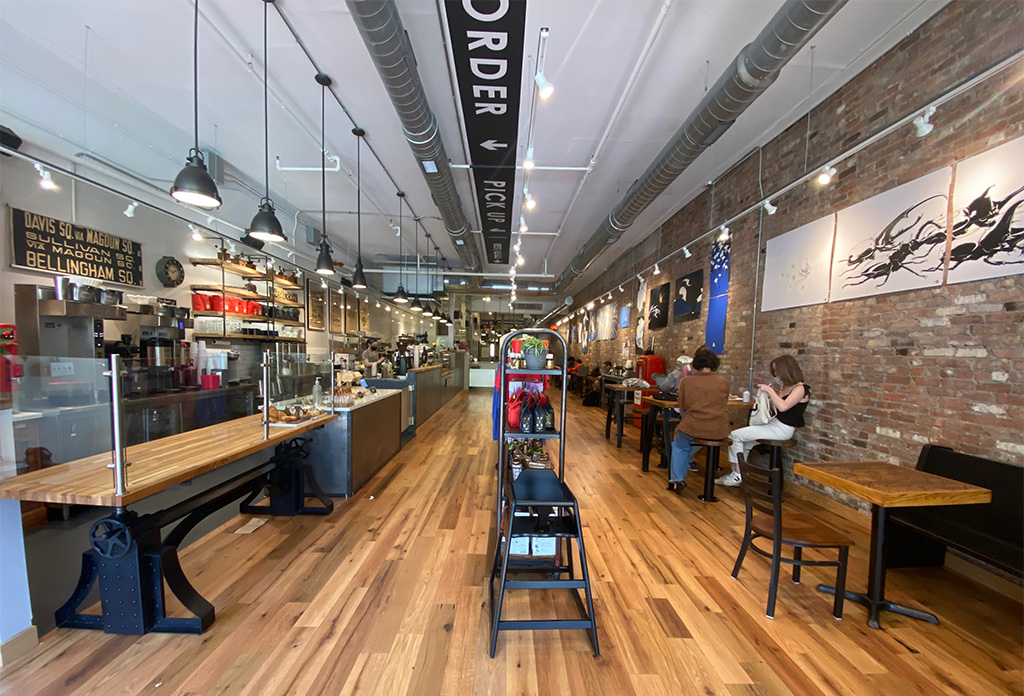 Gerber declined to explain the firing on the record, but vehemently denied the allegation, saying, “We have never and would never let someone go because of union organizing.”

Other conflict has come from ownership’s attempts at dissuading workers from supporting the union campaign, Jaquith said. Management has pulled employees aside to speak with them in “impromptu one-on-ones,” he said, and unrelated meetings have shifted to the topic of unionization.

McGeary described similar efforts at Pavement, which tactically promoted employees to exploit NEJB rules that those at the level of assistant manager or higher cannot join the union, she said.

Despite the decision of Margulies to recognize the union, McGeary said “he has not been very supportive” throughout negotiations.

Margulies did not respond to a request for comment. In a commentary published by WGBH in June 2021, he expressed support for the union but questioned the timing of the effort, given that Pavement was a small business still recovering from the pandemic.

But Jaquith said unionization doesn’t threaten a business. “The people who want to organize your workplace are the people who want it to keep existing,” and employees are mindful of the pandemic’s financial impacts on small businesses, he said. “You can’t negotiate for money that doesn’t exist. No one is looking to bankrupt the coffee shop.” 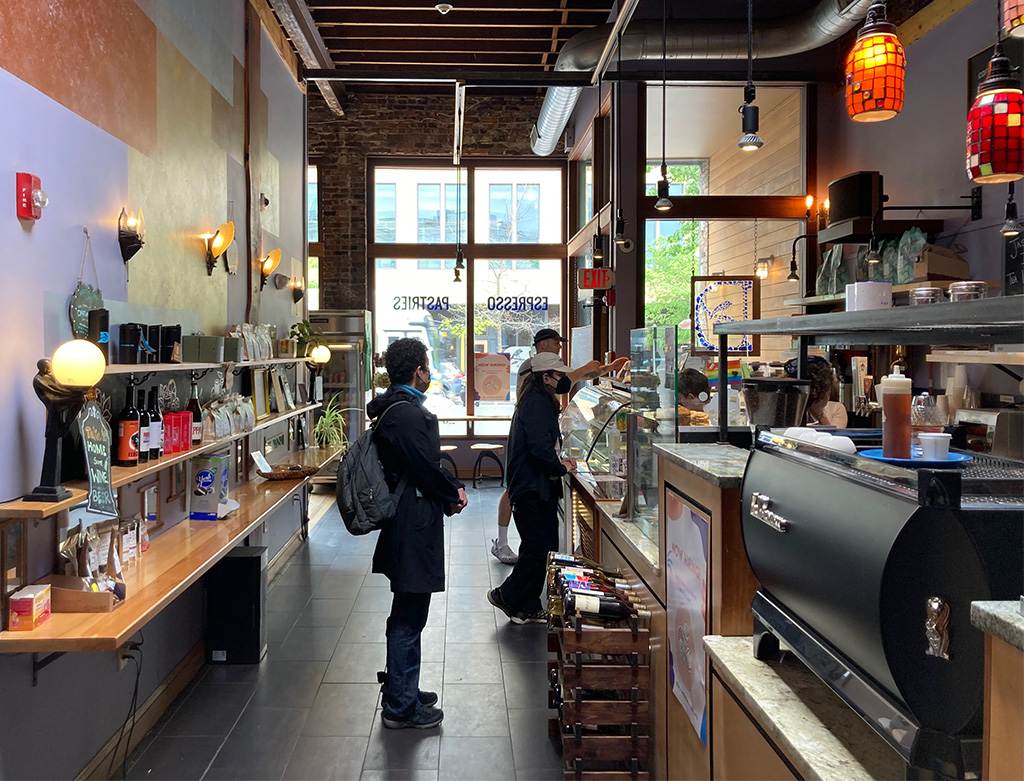 The surge in labor organization at cafés is not unique to Cambridge or Greater Boston. Local coffeehouses in Philadelphia, Detroit, Nashville, Providence and Minneapolis, in addition to 250 Starbucks locations across the country and the entire Midwest chain of Colectivo Coffee, have all tried to form unions. The trend is part of a growth of unionization at large, but particularly in services, said Michael Piore, an emeritus professor of political economy at the Massachusetts Institute of Technology.

Across the country, unionization petitions from October 2021 to March increased by 57 percent from the same period a year earlier, according to the National Labor Relations Board. And according to an NPR analysis, for the first four months of the year, 27.5 percent of petitions were from the accommodations and food service industry, up from 4 percent a decade ago.

One factor is the tight labor market, Piore said. Given the demand of companies for workers, employees are generally less afraid of losing their job for unionizing.

The pandemic may have also played a role by making people more conscious of the constraints of their workplace, with workers desiring more favorable scheduling after they returned to in-person work, he said.

“To make the whole industry better”

Unions have also simply become more popular. According to a 2021 Gallup poll, 68 percent of Americans approve of unions, the highest level since 1965.

“Historically, union organization has come in big waves where people’s attitudes toward unions suddenly express themselves in a way that surprises everybody,” Piore said. “We’re all looking at these new forms of unionization and organization as the potential for one of these surprise waves of mass organization.”

As a member of the 1369 unionization effort, Jaquith is conscious of his role in a larger, industry-wide campaign.

“As baristas, we move between jobs a lot. We see the same things at every place, the same problems we would love to fix but either don’t have the power or don’t have the energy to fix,” he said. “[We want] to make the whole industry better for all of us who work in it.”

The New England Joint Board hosts monthly meetings for workers of the unionizing coffee shops to exchange strategies and support each other, Jaquith said, calling it a “very, very exciting in this moment to be part of a much larger community.”

If a simple majority of the ballots cast in the 1369 election by June 22 support unionization, owners will be forced to recognize the union with NEJB as its certified bargaining representative.