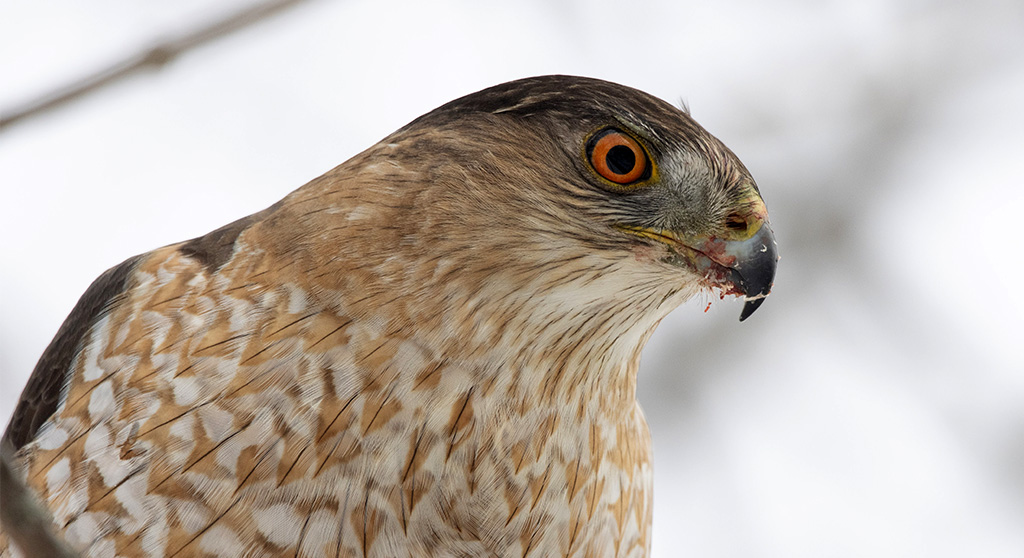 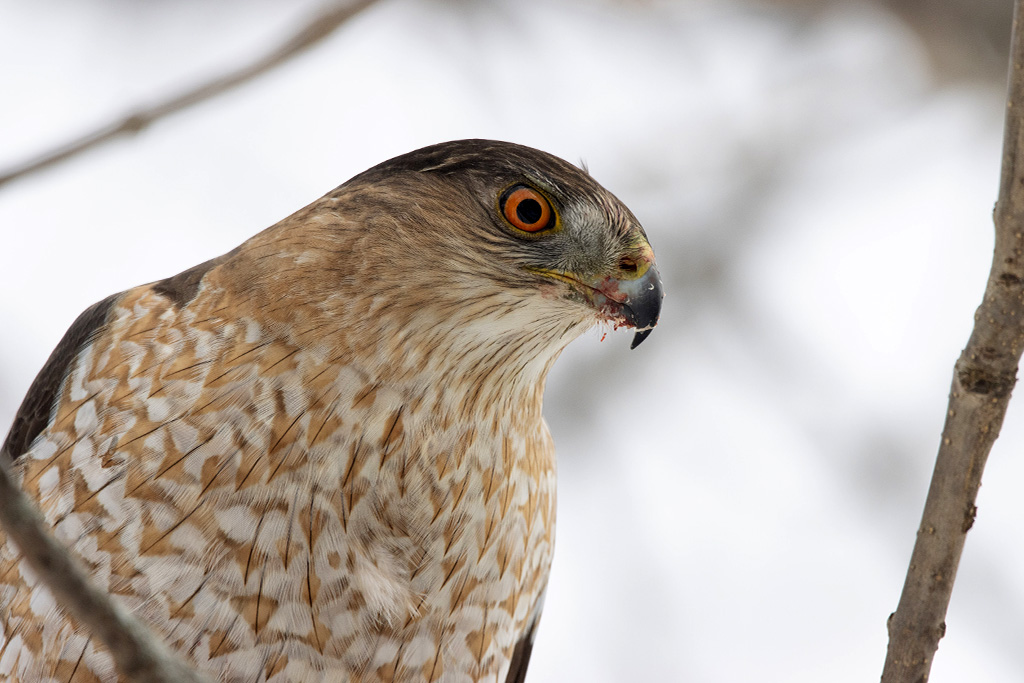 An adult Cooper’s hawk is brownish-gray above, with a dark cap on its head. Its underside is barred reddish-brown. Adults have reddish eyes. (Photo: Richard George)

Cooper’s hawks (Accipiter cooperii), the second-most-common hawks in Massachusetts, eat mostly medium-sized birds such as starlings, pigeons, robins and blue jays. Historically, they also ate chickens (which made these hawks an enemy of farmers) and quail and pheasants (which made these hawks an enemy of game hunters) and songbirds (which made these hawks the enemy of birders). They sometimes also eat small mammals or other vertebrates, including chipmunks, rabbits, mice and squirrels; but birds make up about 70 percent of their diet. This much-maligned hawk, like any other bird, is just trying to survive in the manner for which it has evolved. Its habits, even if distasteful to some, help to maintain a healthy, balanced ecosystem. 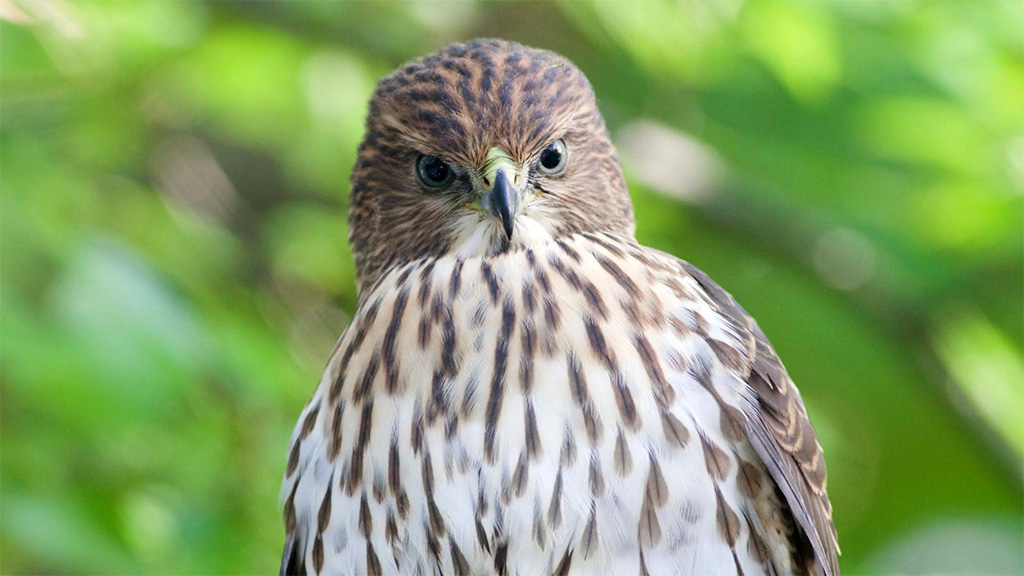 A juvenile Cooper’s hawk in the Baldwin neighborhood dries off after a July morning bath. (Photo: Brian Rusnica)

Ornithologist A. C. Bent observed in 1937, when Cooper’s hawks were considered vermin:

Cooper’s hawk does more damage in the poultry yard than all other hawks put together. It is very destructive to domestic pigeons, of which it is very fond, and if not killed, will soon clean out a colony. It soon learns also where it can find an convenient supply of half-grown chickens or young ducks, to which it makes frequent visits, until its career is ended. It is not easily killed, however, as it is usually crafty enough and quick enough to avoid the farmer’s gun.

Even children’s writer Neltje Blanchan despised this hawk in her 1907 book “Birds That Every Child Should Know”:

Here is no ally of the farmer … a blood-thirsty villain that lives by plundering poultry yards, and tearing the warm flesh from the breasts of game and song birds, one of the few members of his generally useful tribe that deserves the punishment meted out to his innocent relatives. 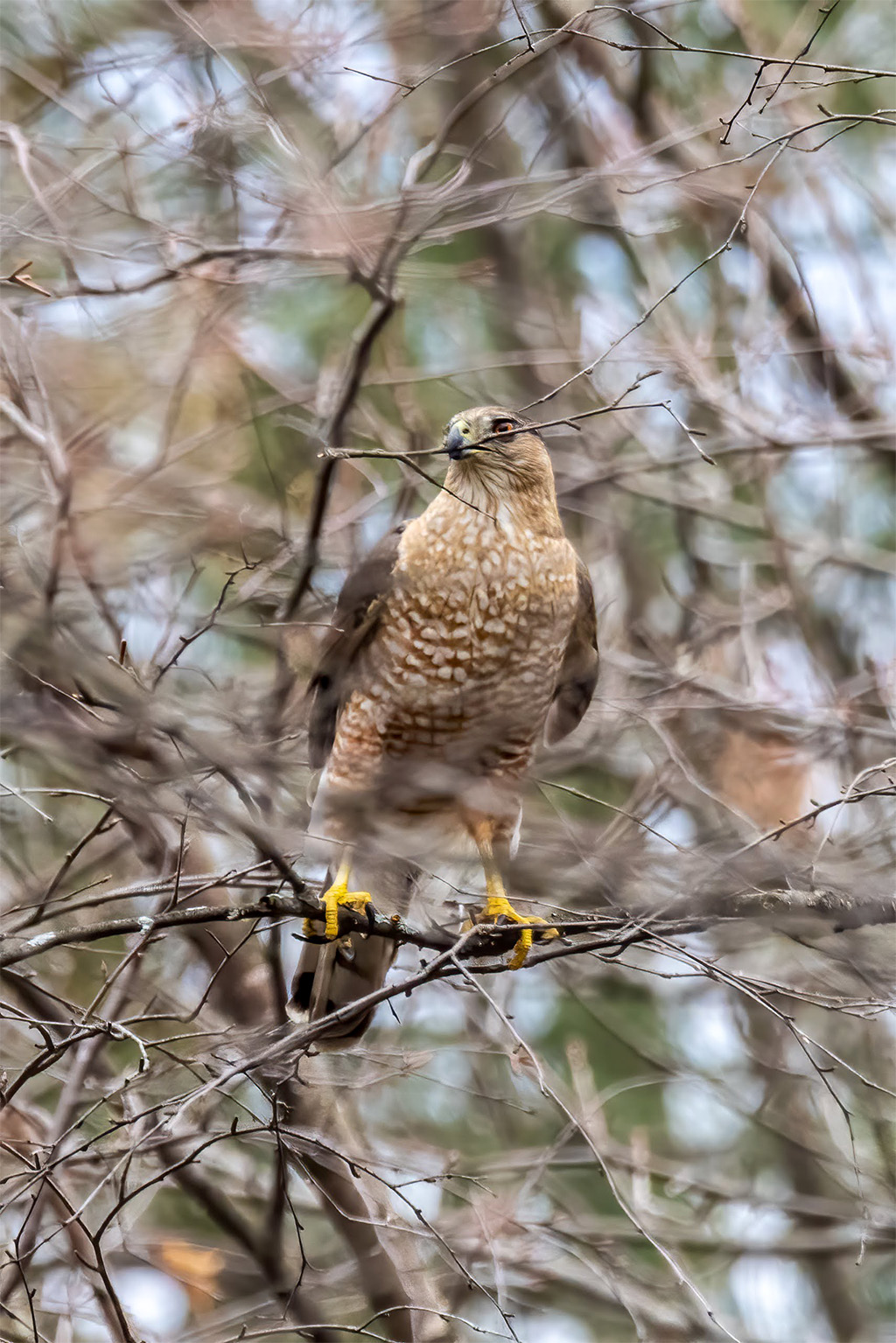 A Cooper’s hawk holds a twig, which it will use in the construction of a nest. (Photo: Richard George)

Like the population of many other birds, Cooper’s hawk populations declined due to widespread hunting in the 1800s and 1900s, followed by the use of the pesticide DDT after World War II. Help arrived in 1972, when it became illegal to kill a raptor or take its eggs or feathers. Today, Cooper’s hawk populations may be increasing. It is estimated that there are hundreds of thousands of breeding Cooper’s hawks in North America, due in part to the fact that these hawks will live near humans in wooded suburbs and well as in forests. In urban areas today, it is estimated that 70 percent of Cooper’s hawk deaths are the result of collisions with windows and cars. 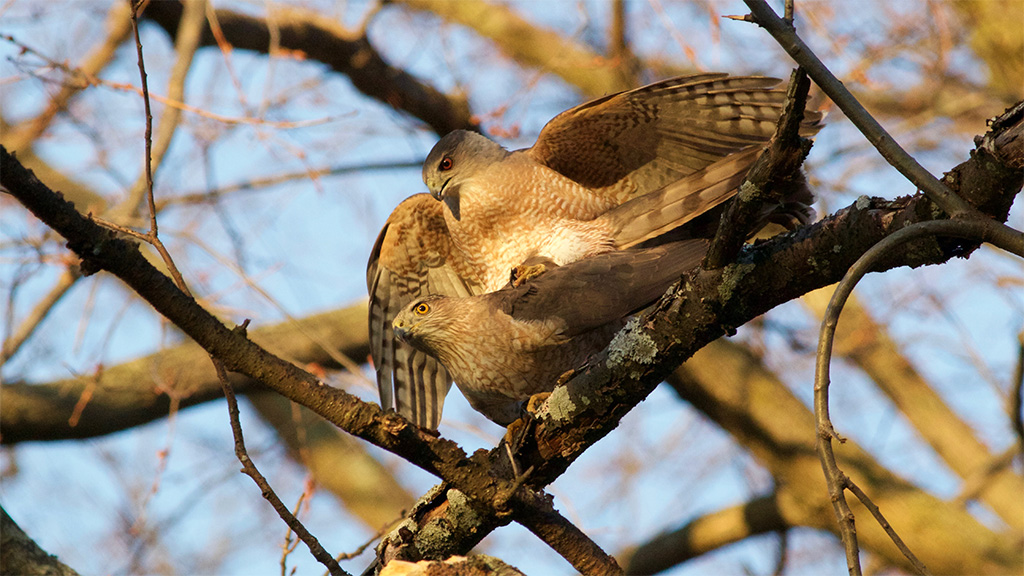 A pair of Cooper’s hawks mate in Cambridge. An adult female typically has an orange iris, while an adult male’s iris can be deeper red. The color becomes darker as the bird ages. (Photo: Brian Rusnica)

Cooper’s hawks migrate to our area in the spring, most often in early April. Twenty or more feet up in a tree, male hawks spend about two weeks building a nest. They use sticks to build a bowllike nest (about 2 feet in diameter and 1 foot high), often in the main crotch of a tree. The hawk lines the nest with bits of bark, moss, grass and leaves. The female hawk lays four or five eggs, one per day. The hawk incubates the eggs after the third egg is laid, so the eggs hatch at different times. 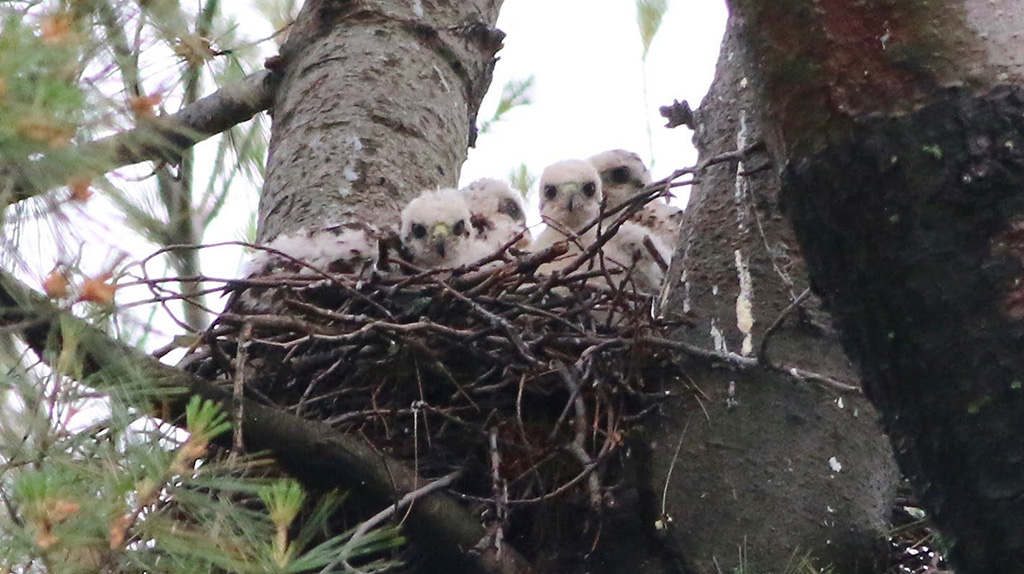 Cooper’s hawk nestlings peer out from a nest in Cambridge. (Photo: Brian Rusnica)

The male hawk makes two to three food deliveries per day to the female while she incubates the eggs. Once the eggs hatch, however, the male and female work together to deliver food six to nine times per day.

Each egg hatches in about four weeks, and nestlings stay in the nest for about three more weeks. After the youngsters leave the nest, they may return when they want to be fed. The parents care for the birds until they can fly and hunt on their own. 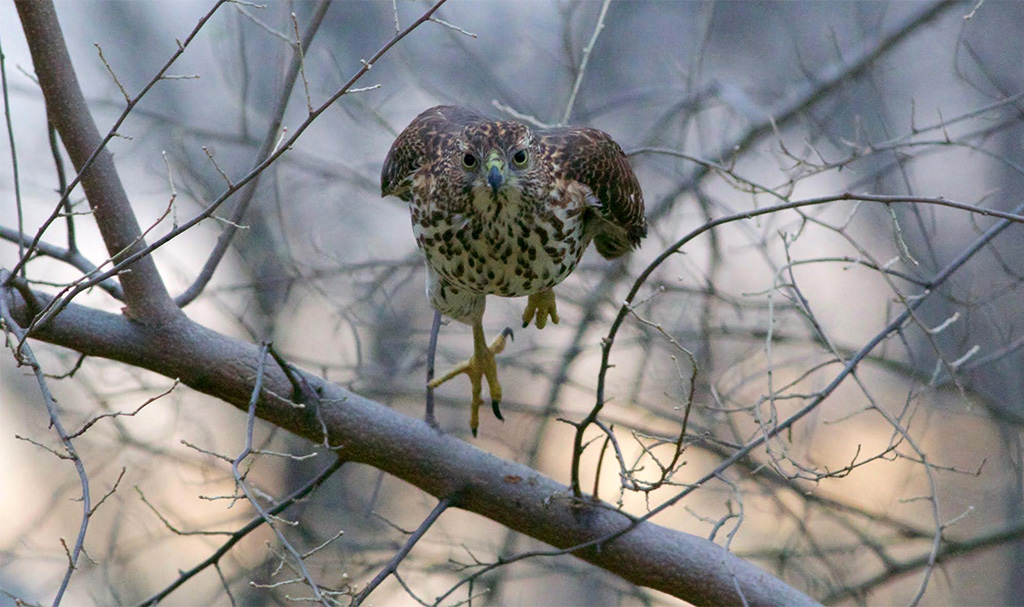 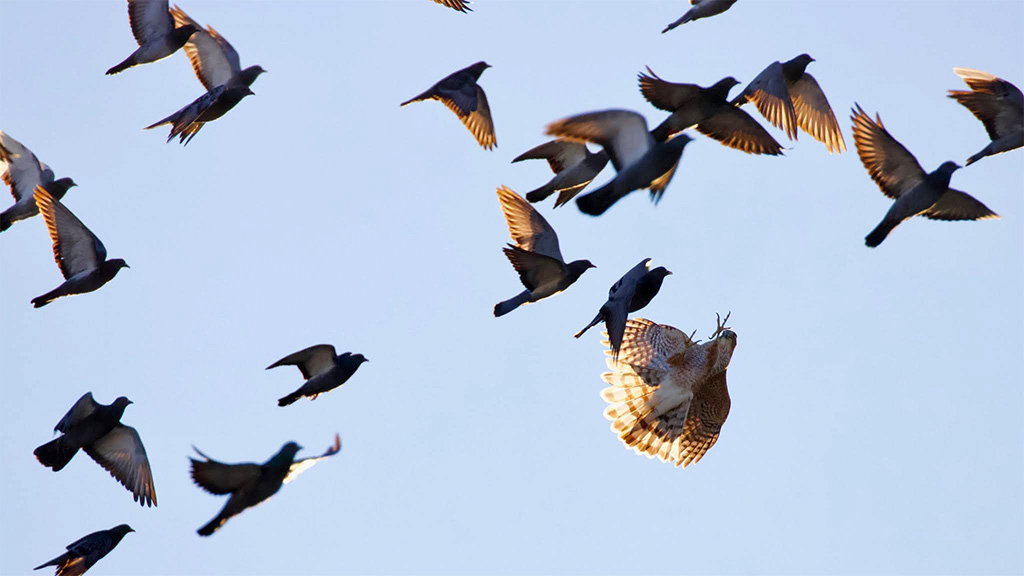 Cooper’s hawks attempt to catch their prey while both are in flight. Here, an acrobatic Cooper’s hawk attempts to snag a pigeon while upside-down. (Photo: Brian Rusnica)

A Cooper’s hawk squeezes with its talons to kill prey – unlike a falcon, for example, which bites prey to kill it. (Photo: Richard George)

From our region, these birds migrate south from late August to early November, with migration peaking in late September and early October. They winter in the Southern United States, Mexico and Central America. Some birds stay in Massachusetts throughout the winter.

Cooper’s hawks are built for speed and agility, and they are adept at racing through trees and branches to catch prey birds in flight. Females are about 30 percent larger than males. According to Bent, the hawk’s “short wings and long tail give it such control of its movements that it can dart in and out among the branches of the forest trees with impunity, or dodge through the intricacies of thickets where its victims are hiding.” Recent research has found that 23 percent of the Cooper’s hawks had healed fractures in the bones of the chest (although young hawks are much more likely than adults to crash into bushes or thick brush). 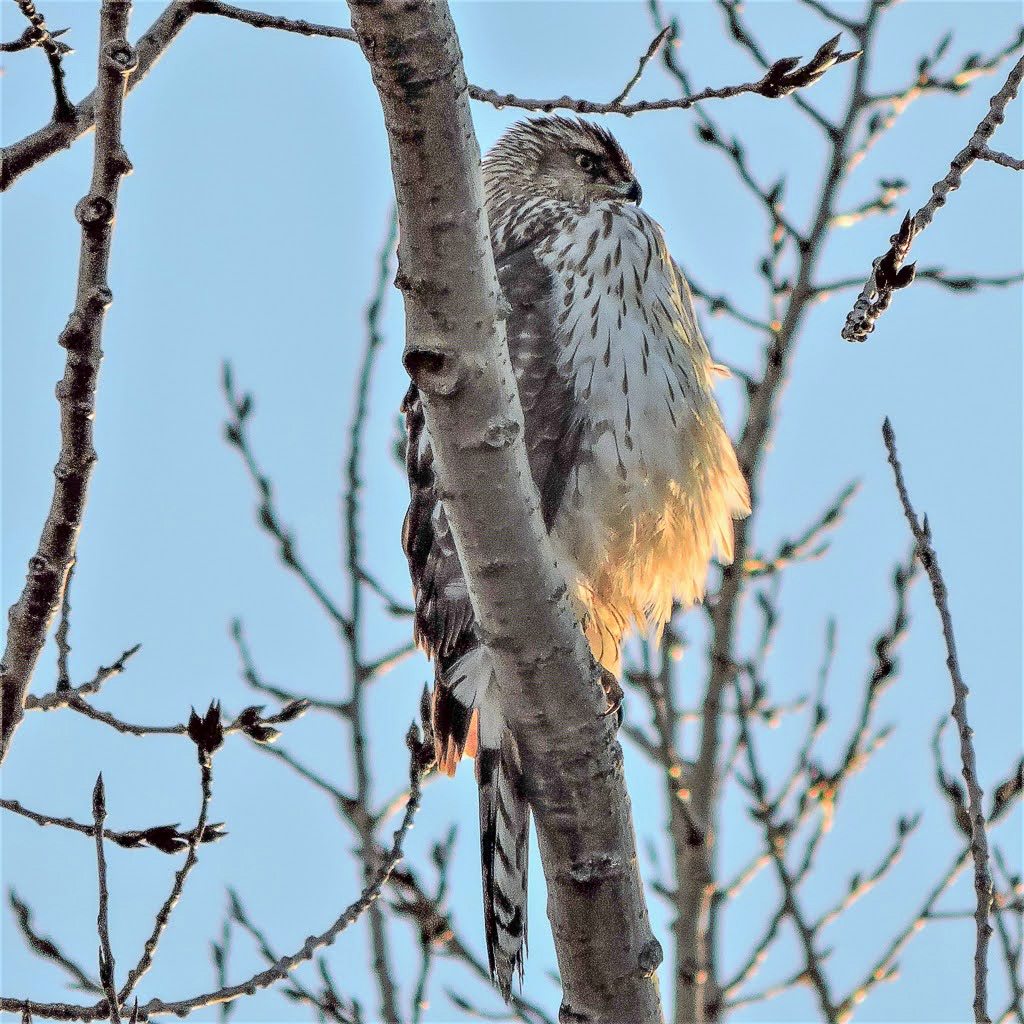 A Cooper’s hawk in February puffs itself up as insulation from the cold. (Photo: Ann Schlesinger)

The Coops often keep hidden in the area, preferring inconspicuous perches deep in trees. However, they cause a tremendous eruption when they make a run on the feeding pigeons on the ground. The first sign is the explosive flush – dozens of wing sets clapping together as the pigeon flock gains altitude to try and flee. But trailing the formations, the Coop bursts through the air with devastating speed and agility. The hawk will usually single out an individual to target and execute dazzling turns to try and make a catch. I have to say, the majority of times the pigeons make an improbable escape. The frustrated Coop will continue to harass the flock as they circle upward and away, and rarely does the flock break formation.

If you have the opportunity to observe a Cooper’s hawk, relish its speed and agility. Know that these hawks tend to hunt the most common local birds and help to prevent their overpopulation and harm to the ecosystem. For more about local Cooper’s hawks, read “A Year Among Cooper’s Hawks of Cambridge.” 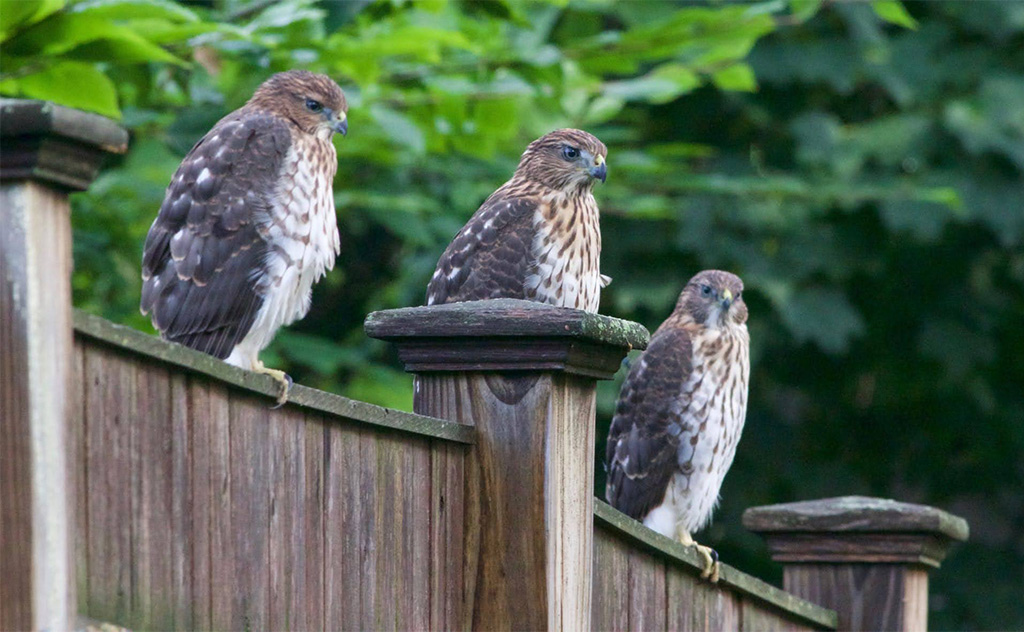 Red-backed Salamanders are tiny but numerous, and invading fungus could cause a huge die-off