‘Moonage Daydream’: There’s a starman waiting on the screen 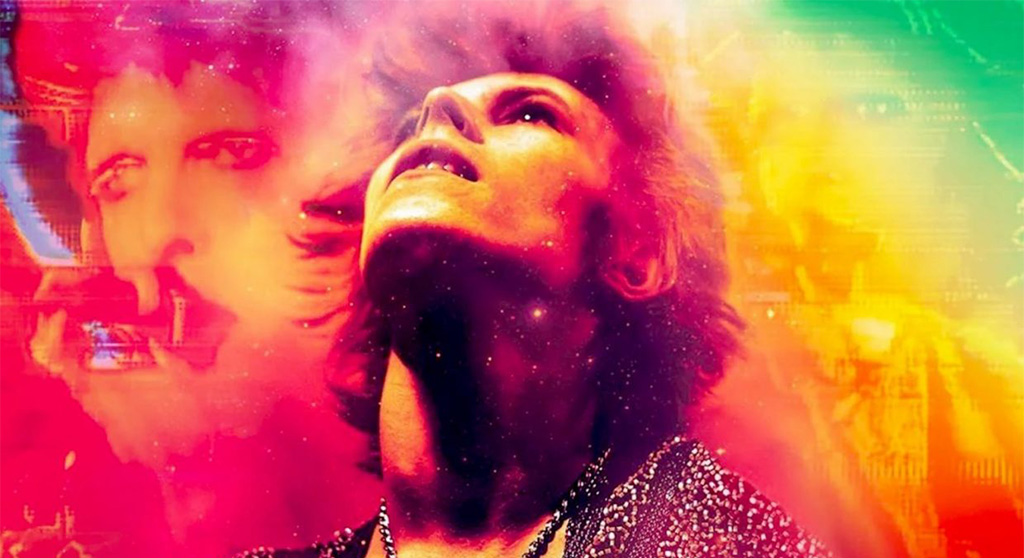 ‘Moonage Daydream’: There’s a starman waiting on the screen

Brett Morgen’s tribute to the life and immeasurable cultural contribution of musical icon David Bowie is not your typical rock-doc, but a sensual blast of imagery and sound – an enigmatic veneration, if you will, that delves into the heart and soul of all things Ziggy Stardust and beyond sans pedagogy.

Bordering on the experimental, “Moonage Daydream” blasts off with effusively edited, quick-cut razzmatazz, bouncing from the handsomely androgynous Ziggy on stage to esoteric silent film clips while orbiting space music chirps. Then we get a last line whispered by Rutger Hauer’s replicant in “Blade Runner” as Bowie is framed in infinite day-glo, duplicated as if he were a Max or Warhol painting. Then we settle in on the charismatic space alien doing a impassioned rendition of “All the Young Dudes,” the song he wrote for Mott the Hoople. It’s a kinetic kick in the kisser and the promise of something more: a Bowie immersion for fans and a 101 for the curious and uninformed.

At nearly two and a half hours, Morgen’s film maintains the power surge of riveting wonderment for a calisthenic 60 minutes; the films ebbs as we move from the big-screen culmination of Ziggy in Nicolas Roeg’s “The Man Who Fell to Earth” (1976) to the Thin White Duke stage of his career. It’s in these later frames we hear more from Bowie reflecting back on his family and early challenges, the influence his brother had on him (he exposed him to Kerouac’s “On the Road” and Fats Domino, and was later put away in a sanatorium), his constant fear of mental illness and his aloof, estranged relationship with his mother. There’s plenty of ’60s and ’70s interview footage with Bowie pushing bisexuality and cross-dressing with buttoned-down, nonchalant panache. Missing however is Angie (his first wife that Jagger crooned about), and there’s just a wispy air kiss to Iman and no “Putting Out Fires.”

What Morgen concocts is a kaleidoscopic montage without a traditional narrative, though much of what you see is in pat chronological order. Morgen owes much to the late D.A. Pennebaker (“The War Room,” “Bob Dylan: Don’t Look Back”), who shot several early Bowie concert films including “David Bowie: Ziggy Stardust” (1973), as well as to the camera folk who tailed Bowie during the making of “Man Who Fell to Earth” and his wistful exile to Berlin in the early ’80s. In the film you get a clear sense of the iconoclast’s commitment to his art and desire to morph and try different mediums (he was the first rock star to do a Broadway show, starring in “The Elephant Man” in 1980), but you never really get a full sense of Bowie the man. Does he remain aloof because he needs his distance to create, or is he a practical poser, or perhaps even a misanthrope? Hard to tell, but you do see the glimmer of a wry character in there who’s an innocent searcher, a bit of a raconteur and a puppet master, quick with a terse retort to those asking about his mask du jour.

One note (make that two) about the production: The Bowie estate sanctioned the film, which means Morgen, whose past reflections on intriguing personas include “The Kid Stays in the Picture” (2002) detailing the manic up and downs of New Hollywood producer Robert Evans; “Jane” (2017), a strong portrait of primatologist Jane Goodall; and “Cobain: Montage of Heck,” the 2015 look back at Nirvana frontman Kurt Cobain, has access to Bowie’s film archive, artwork (he was an impressive painter) and music. That, especially the music, is a big win when you consider the flaccid 2020 biopic “Stardust” hobbled by its inability to play Bowie tunes.

In the late ’90s director Todd Haynes (“Carol,” “Poison”) wanted to produce an adoration of Bowie and a nostalgic kiss to glam rock. Bowie turned him down, and Haynes went a different route, resulting in the underappreciated “Velvet Goldmine” (1998) in which he invents a fictional ’70s glam rocker named Brian Slade (played with perfect pomp and pouf by Jonathan Rhys Meyers) who was, for all intents and purposes, Ziggy/Bowie. For the film, Haynes and crew recorded new glam-styled tunes and borrowed a few from Brian Eno, who appears several times in Morgen’s doc, credited as a creative influence on Bowie throughout the years. The other wild thing about the film’s journey to the screen is that when Bowie’s estate gave Morgen the green light, he had a heart attack and went into a coma. The film almost didn’t get made.

It’s a passion project, to be sure, that will sing to those who miss Bowie, especially those who embrace all stages of his meteoric and variegated career. Given the redundancy of some philosophies expressed and imagery reused, the film could have done with another round of edits, but it’s an exquisite composition with unlimited access and, like its subject, a shining wonderment that tantalizes and holds you at arm’s length.