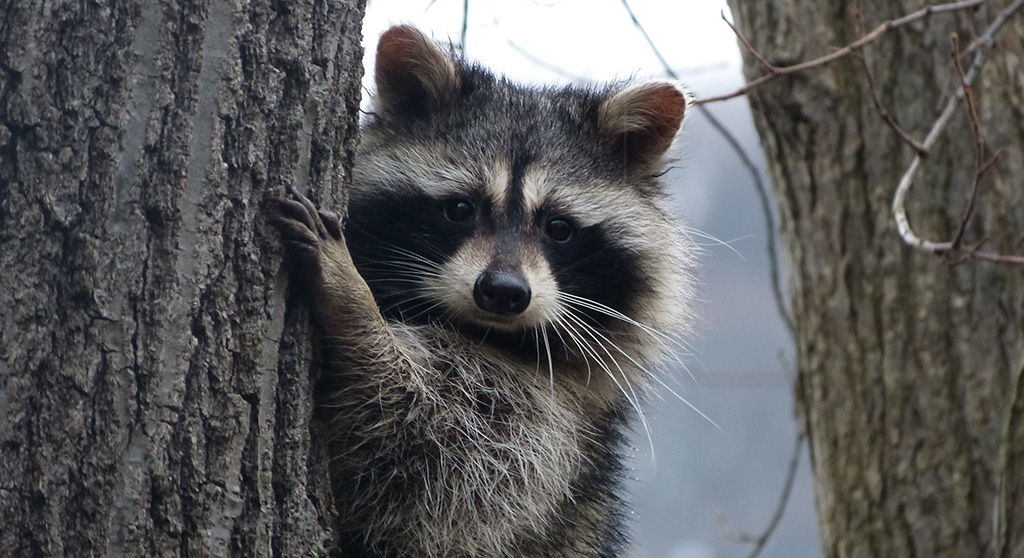 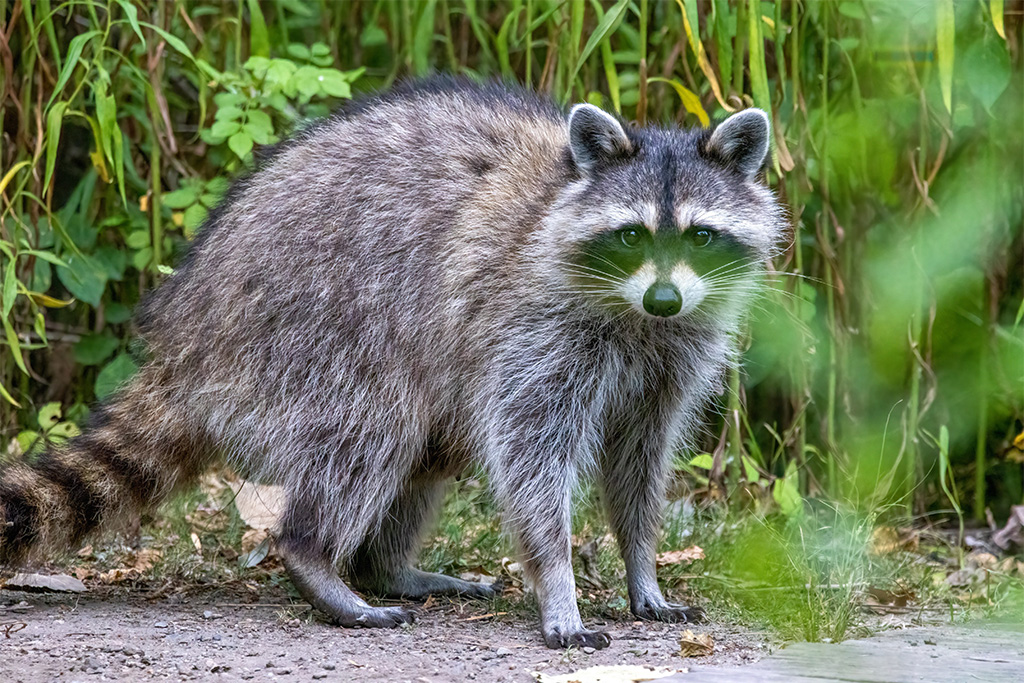 We all know raccoons: those medium-sized mammals with black face masks, bushy striped tails and a penchant for “washing” their food.

Raccoons are smart and adaptable, which is why they make their homes in cities, suburbs, farms, wetlands, forests and, yes, even in Cambridge and Somerville. They eat whatever is available, including insects, crayfish, crabs, eggs, berries, nuts, seeds, garbage, corn and pet food. 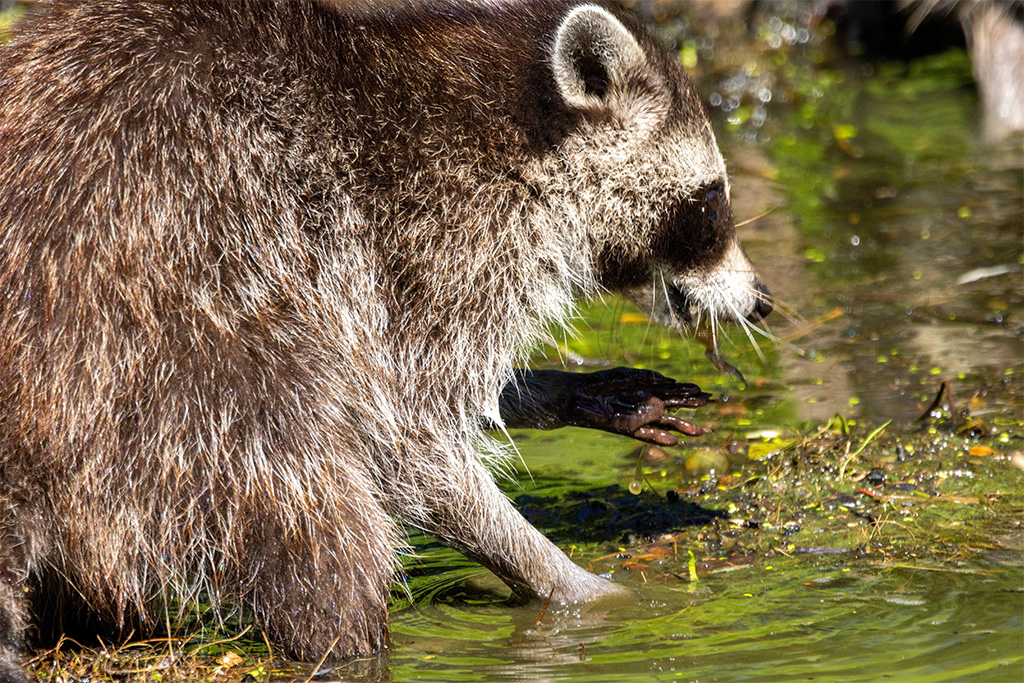 Because these critters are active year-round (they do not hibernate) their diet may change with the seasons. Raccoons are most active at night, dusk and dawn, but if food is available during the day, they may take advantage. If you have ever heard a raccoon outside your window at night you know they can be quite noisy – hissing, growling, chattering. If you’ve ever had them in your attic, you know they are quite active and noisy, jumping and thumping around, especially at night.

As cute as raccoons are, they can carry diseases, including rabies. In fact, they are the greatest carrier of rabies in Massachusetts. If you are bitten or scratched by a raccoon, call your doctor; you will need rabies shots. 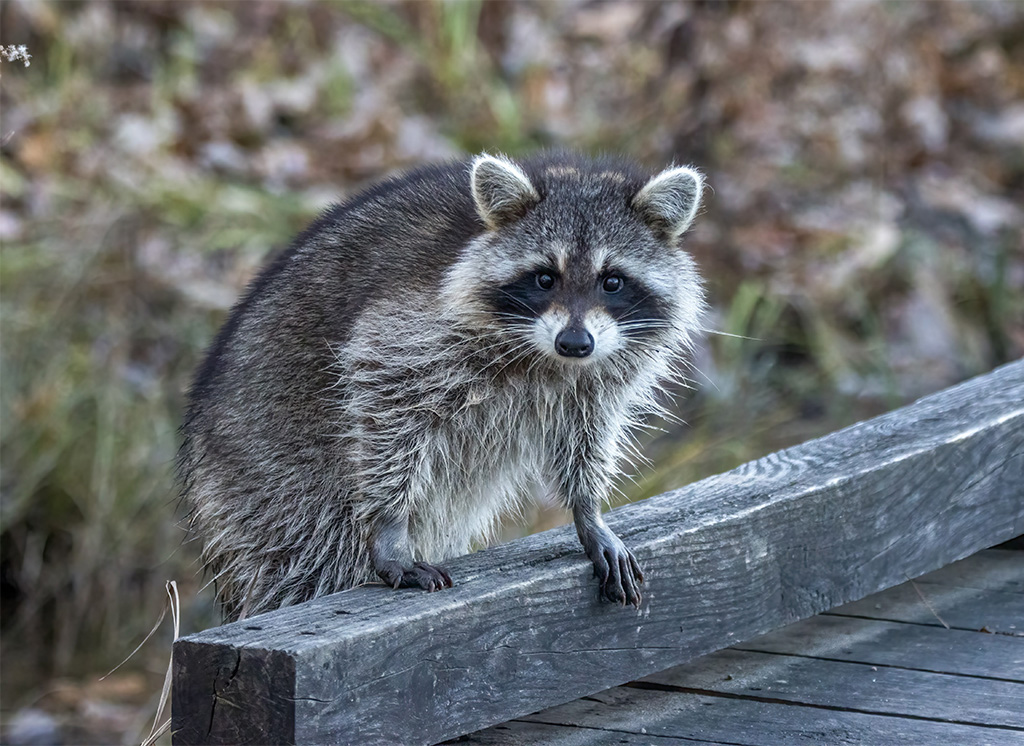 A raccoon in West Cambridge in November. (Photo: Richard George)

In the 1800s, raccoon meat was relatively common in city game markets and cooked in fancy restaurants. Mark Twain included raccoon meat (as well as ’possum, terrapin soup, frogs, sheep’s-head, wild turkey, woodcock, Boston bacon and beans, radishes and stewed oysters) on a list of foods he missed while in Europe in the 1870s.

Raccoons mate anytime from January to March. They give birth to about four kits in April or May. The tiny kits weigh only 2 ounces at birth, and take about two months to become active. They develop rapidly, however, and by late summer are independent but may live with their mother and siblings through the winter. Kits leave the family den for good in the spring. 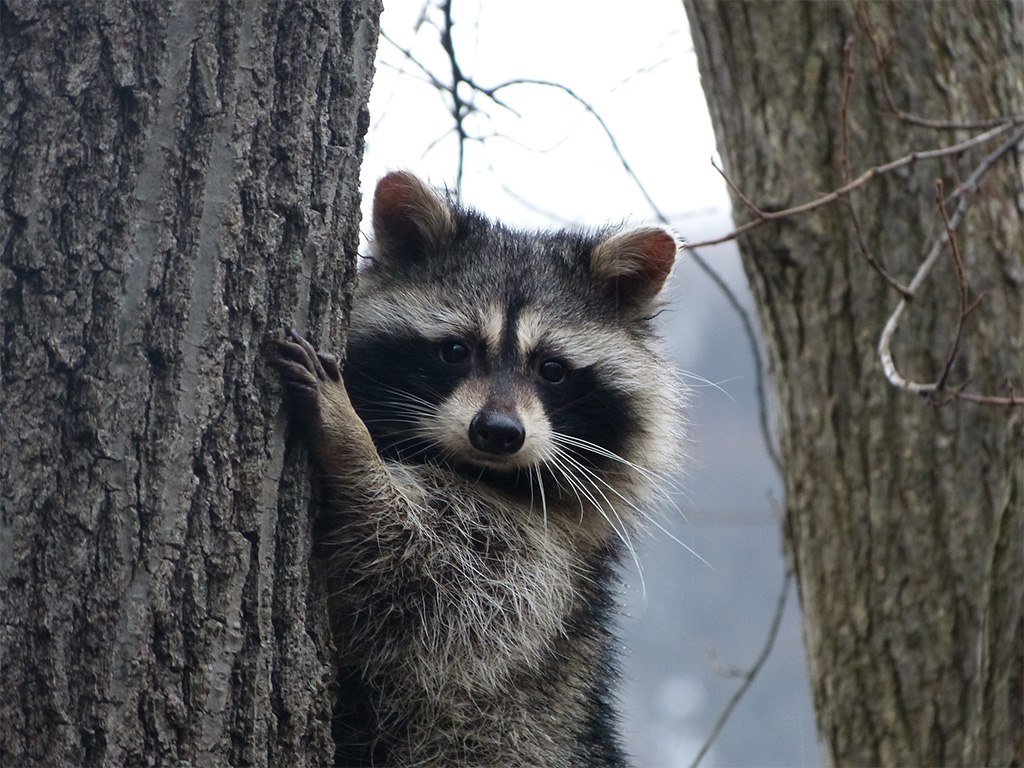 A raccoon near Fresh Pond stares down at visitors. (Photo: Brian Rusnica)

Raccoons are native to North America, so when Europeans arrived, they had never seen the critters before and had no word for them. The term raccoon comes from the Powhatan word arahkun, meaning “he scratches with the hands.” Captain John Smith of Jamestown said of Chief Powhatan, “Before a fire upon a seat like a bedsted, he sat covered with a great robe, made of Rarowcun skinnes, and all the tayles hanging by.”

After Columbus’ second voyage, raccoons became the staple food for the hundreds of gold-seeking Spaniards on Hispaniola (Haiti and the Dominican Republic). First, the Spaniards ate the tame raccoons in the Taíno villages, then used dogs to hunt and kill wild ones. By 1513, the Spaniards had exterminated all the raccoons on the island. The raccoons on Cuba and Jamaica survived a bit longer because the Spaniards arrived later and in fewer numbers. 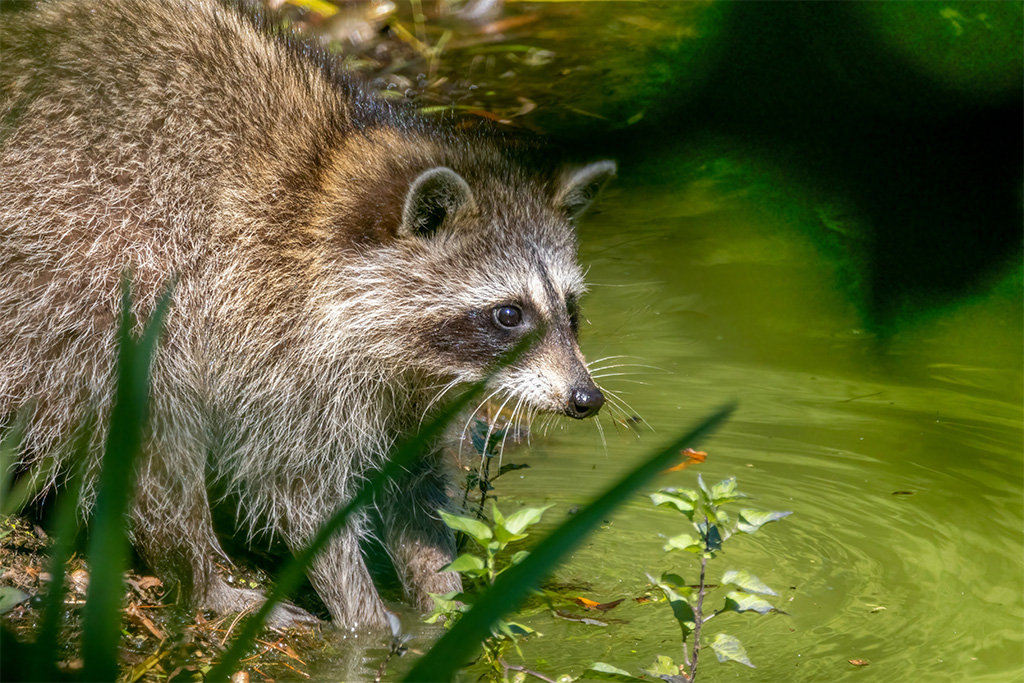 Raccoons can often be seen with their hands in water as they search for crayfish, snails, fish or worms. (Photo: Richard George)

In 1926, a supporter gave President Calvin Coolidge a raccoon to cook for Thanksgiving dinner. The first family, however, decided to keep it as a pet, and named it Rebecca. Rebecca took walks on the White House lawn and even attended the annual Easter egg roll. When the family went on vacation to South Dakota, they planned to bring only their two collies and five canaries, but at the last minute added Rebecca to the entourage. According the first lady, one of Rebecca’s favorite pastimes was “playing in a partly filled bathtub with a cake of soap.” 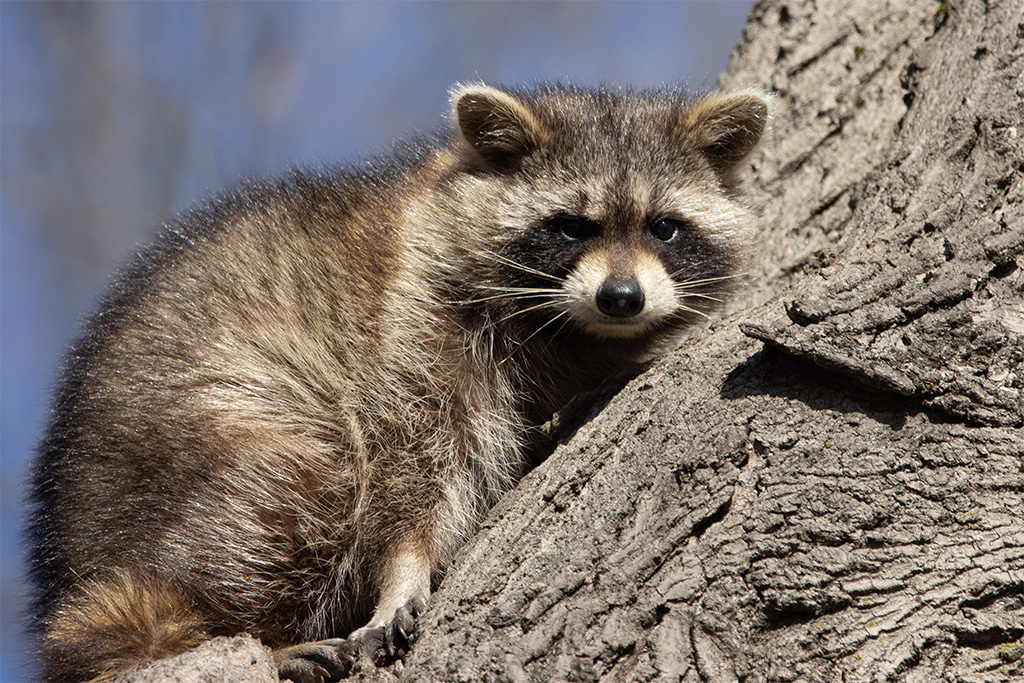 In winter, raccoons may spend days in their dens without eating, but they do not hibernate. (Photo: Richard George)

Raccoons have long been hunted for their warm fur and meat. By the 1940s, hunters killed about 1 million per year. By the 1960s, this had increased to 2 million, largely because of the popularity of television shows such as “Daniel Boone,” in which the actor Fess Parker wore a coonskin hat. (In reality, Daniel Boone did not like coonskin caps and wore a wide-brimmed felt hat.) By the 1970s, hunters killed more than 5 million raccoons per year. As late as 1987, the hides brought in more revenue in North America than any other animal pelt. Today, raccoon hunting has declined due to a decrease in demand and pelt prices. 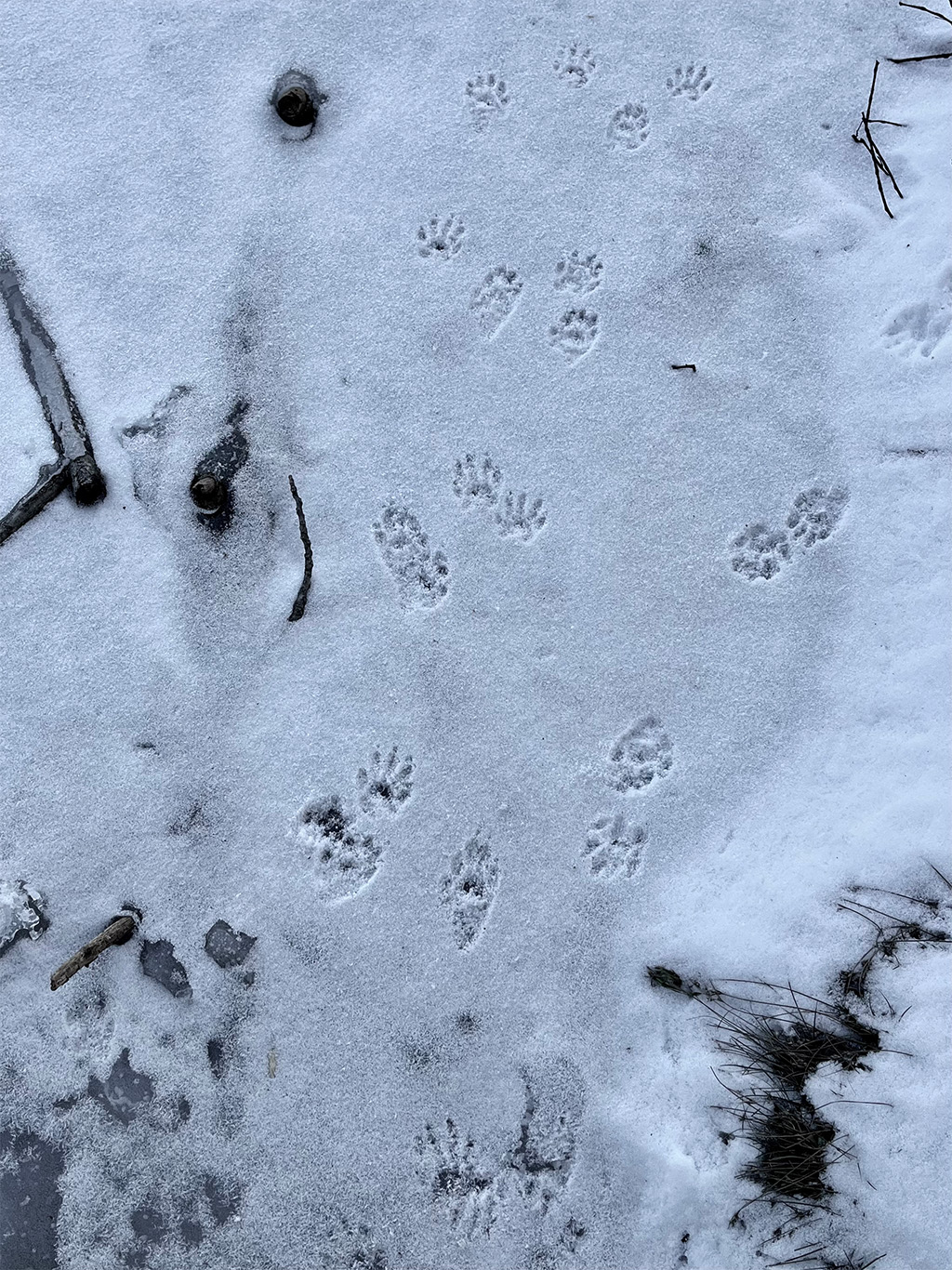 Indigenous people and early North American settlers ate raccoon meat, and vintage editions of the Joy of Cooking into the 1960s described how to prepare it. But as factory farms grew and hunting declined, people began to eat fewer and fewer game animals such as raccoons – and though thousands of raccoons are hunted and sold in the United States today, the percentage of the U.S. population that hunts has declined steadily since 1960. There were then 14 million hunters, or 7.7 percent of the total U.S. population, but hunters made up only 4.6 percent of the population as of 2020.

And what is it about raccoons “washing” their food? Some scientists think the dousing in water heightens the sensitivity in their hands so they better understand what it is they’re eating.