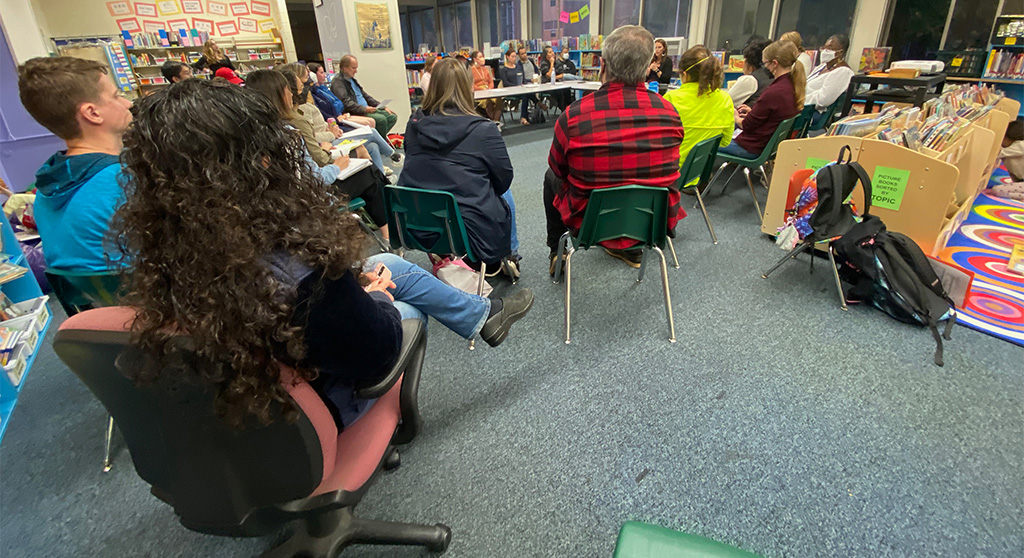 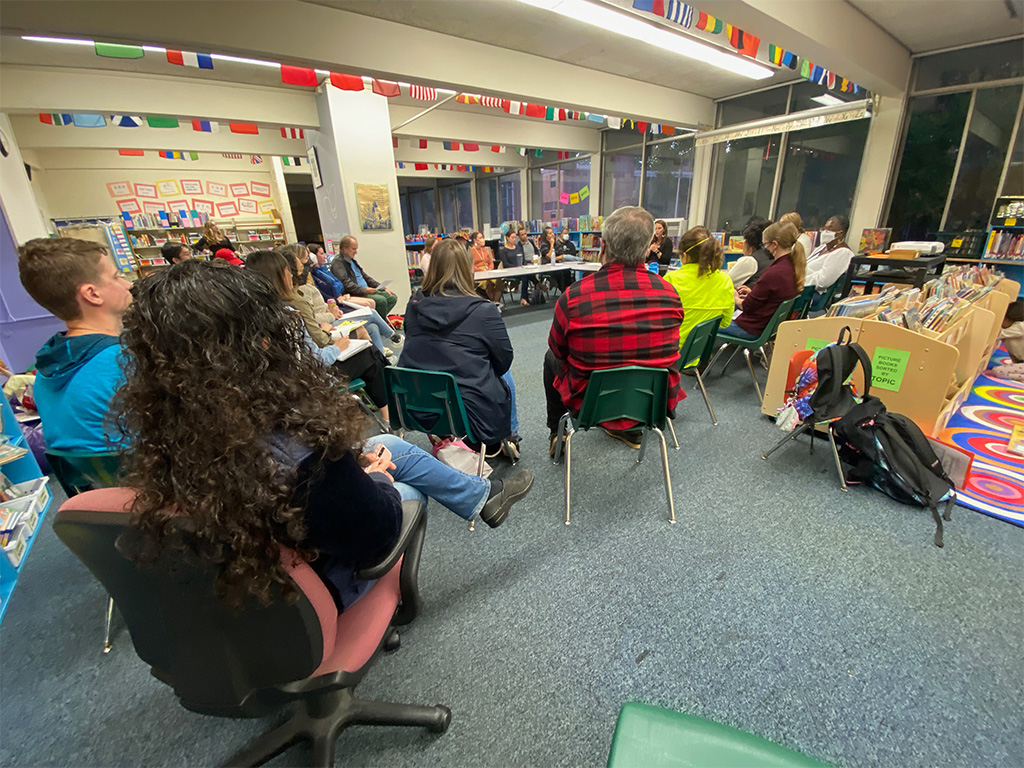 Despite an attempt more than a year ago by the Cambridge Public Schools district to bring consistency to its school councils, they are still not managed uniformly in accordance with all local rules or state laws. An updated handbook that resulted from the work is at the center of a tug of war between the district and School Committee over which has oversight over the councils.

School councils, created in the state Education Reform Act of 1993, provide a forum for parents/caregivers and educators to discuss priorities and provide input on some spending at their schools. Membership is divided evenly between the groups, and councils are co-chaired by the principal and a caregiver.

Beyond those basics, there are many issues waiting to be clarified in a handbook, which is on the agenda for a meeting on Thursday.

Among the problems with Cambridge’s councils are budgets that members are supposed to provide input on, but may never see; in practice, the budgets are controlled by principals. The total school improvement plan budget is more than $1.5 million in the district’s current-year budget, but how it is being spent is opaque. The plans are posted school by school on a centralized district webpage, but the most recent plans posted are from the 2019-2020 academic year and contain no financial data. 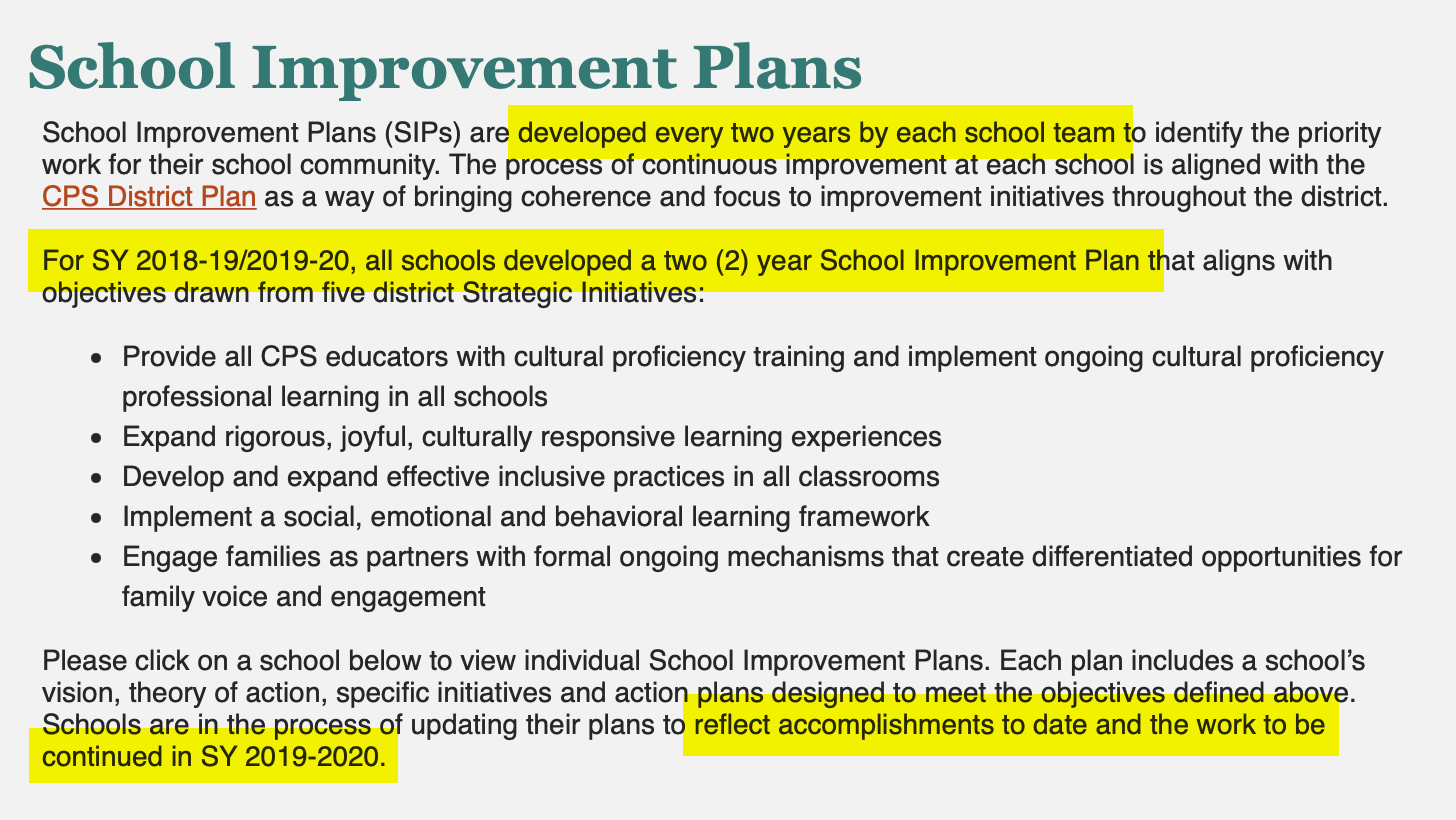 The councils’ inconsistencies violate Open Meeting Law, with some meeting minutes never uploaded or information from past years removed, and current meetings that can be impossible to attend, such as a high school council meeting held in October without being announced publicly or posted on the school district calendars.

Each school has its own website with links to its council, but there is no consistency to how the website provides information on council membership, meeting agendas, presentations or past meeting minutes. On “Family Involvement” pages, information is often obsolete or missing; many sites have not posted minutes for the current semester or the past academic year.

Many schools, including Cambridge Rindge and Latin, require attendees to sign up for meetings in advance using a link off their council webpage. The sign-up form says people can attend remotely using Zoom, but the district does not require councils to offer virtual meetings, and people sometimes registered, only to have the Zoom link never arrive – an issue that arises at other schools as well, including the Graham & Parks.

According to the law, the councils are municipal agencies, which means that the educators and caregivers elected by their peers are considered public officials and the meetings must follow Open Meeting Law: Meetings are public, notice for them must be posted with the city clerk and in a public place at least 48 hours beforehand; minutes must be kept and posted; and anyone is allowed to record, as long as the recording isn’t disruptive.

“Our handbook does state that schools are to offer both options in-person and virtual to encourage participation,” said Sujata Wycoff, the school district’s director of communications, in a Thursday email, and the district is “amplifying this expectation.” (Wycoff added that the councils are not required to post video of the meetings.) 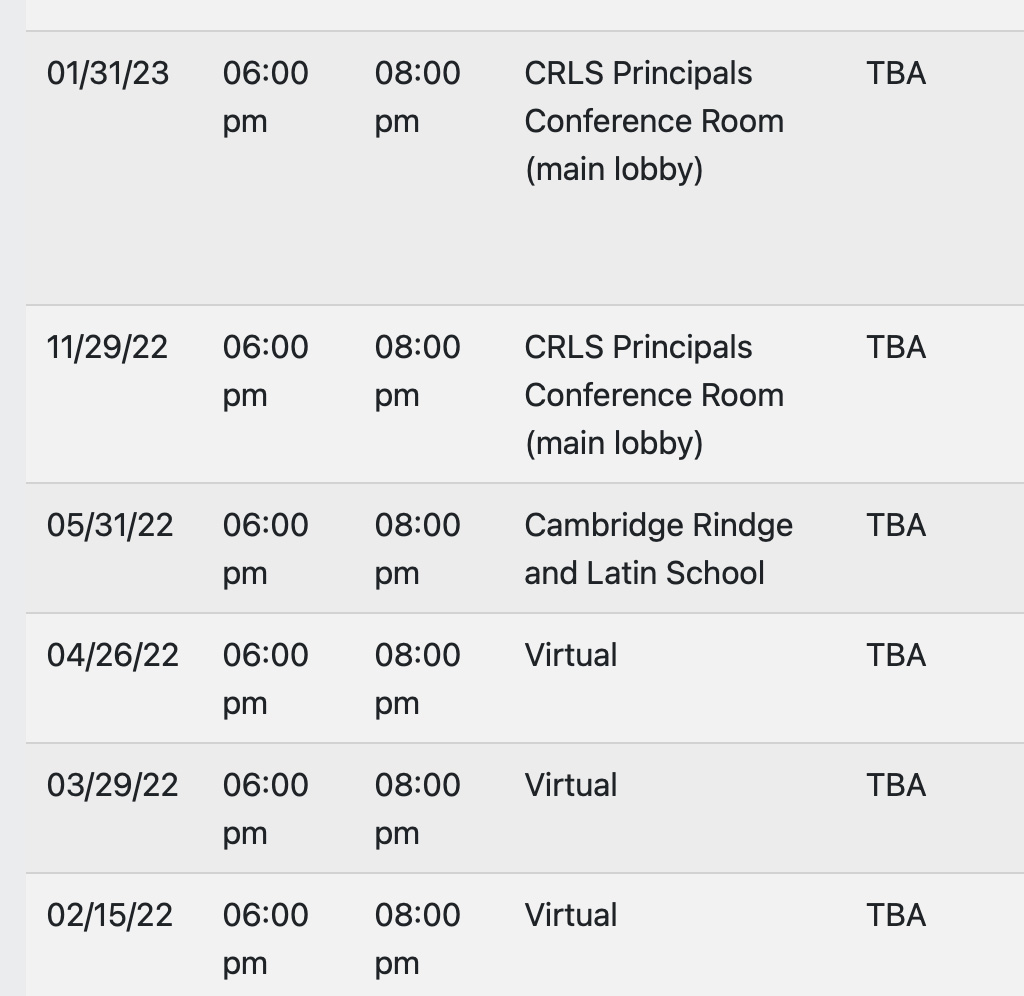 The CRLS school council page shows gaps in meetings – and topics that are always “to be announced” – despite saying the group “usually meets on the last Tuesday of the month” and a district handbook saying “meetings will be held once per month.”

Wycoff had also confirmed in a Nov. 3 email that school councils must adhere to Open Meeting Law. “The public will be notified as required by the Open Meeting Law through a variety of ways, including but not limited to, email, text and/or flyer and the CPS website,” she wrote. “Agendas are shared with the School Council prior to the meeting and minutes will be posted online as indicated in the handbook.”

The district then reemphasized the importance of following the law with principals at a meeting in mid-November, Wycoff said, promising that the district’s Family Engagement Office will oversee compliance with the guidelines.

Yet at this point even the names of Cambridge’s school councils lack consistency. Graham & Parks has its “Steering Committee,” while Fletcher Maynard Academy has a “Leadership Team.”

Working group does its work

The district initiated a review of school councils in the fall of 2020 to address the irregularities. A working group charged with drafting a handbook that would make the councils more accessible to the community was led by Robin Harris, former principal of the Fletcher Maynard Academy until the spring of 2020, when she became director of family engagement for the district.

The handbook was delivered by the working group to the district administration in July 2021, but it was not made public until superintendent Victoria Greer released it with little fanfare via a CPS website community news update nearly a year later, on June 21, 2022. Harris retired from the district at that time.

The School Committee’s Subcommittee on Communications and Community Relations was set to discuss the original handbook two days later, at its June 23 meeting, but that meeting was canceled on June 22.

The subcommittee tried again 16 weeks later; member co-chairs David Weinstein and Fred Fantini scheduled a meeting for Oct. 13. It was announced to the public two days earlier – the minimum time required by law.

In the meantime, the handbook was being revised by the superintendent’s executive leadership team of deputy and assistant superintendents, district officers and department heads. The district distributed this revised version to a limited number of administrators and School Committee members on the morning of Oct. 13, just hours before the subcommittee meeting. With little warning or time for review, members had numerous questions; Fantini said at the meeting that he hadn’t even realized the handbook had been released that day for review.

Among the changes raising questions: The working group’s original edition of the handbook gave the School Committee approval of school improvement plans. In the district revisions, “School Committee” was crossed out and “superintendent” was typed in to replace it.

While state law and Massachusetts Department of Elementary & Secondary Education guidance give the district authority over curricula, the School Committee has fiduciary responsibility over funds to support the district’s goals.

Manual Fernandez, who presented the handbook to committee members that night, struggled to answer School Committee questions. He’d been head of school at the Cambridge Street Upper School for nine years until becoming the district’s chief equity officer Aug. 3, 2021, for a new Office of Equity, Inclusion and Belonging. He was in that role when the handbook was in district hands after delivery by the working group, and his team is responsible for ensuring that schools follow the district’s and DESE guidelines and aligns with state law.

Yet at the time of the Oct. 13 presentation, he said he had just been handed responsibility for the handbook. With him was Raymond Porch, a member of his team who became the district’s director of family and community engagement only two days before the meeting.

“We will continue to edit until it does what it needs to do in terms of aligning with the law and, frankly, capturing the spirit of the Cambridge community,” Fernandez said. “I don’t see this as the final document … I see it as a document that’s going to get us on the road.”

School Committee member Ayesha Wilson said in October that she was also unclear on whether the committee or superintendent’s office was responsible for approving the final version of the handbook, and how feedback from school councils would be handled to further improve it.

Responsibility for school improvement plans is also given to school committees by DESE per its website, which cites state law – Chapter 71, Section 59C – as its authority. Yet the law to which the state agency refers actually says the opposite: Principals will create “a plan for improving student performance” annually and “the superintendent shall review and approve the plan, after consultation with the school committee.”

“I’m afraid the school council info on our website is outdated,” said Jacqueline Reis, media relations coordinator for DESE in a Tuesday email. She said her department now agreed with the state law, though the website doesn’t yet reflect it.

Glenn Koocher, executive director of the Massachusetts Association of School Committees, said school councils act in an advisory role to the principal on creating improvement plans – and the School Committee has sole fiduciary responsibility for the funds.

This interpretation gives the committee some influence over policy if it declines to fund any part of a school plan.

The same law says school committees may grant a school council “additional authority in the area of educational policy,” except in public employee labor relations.

Unsurprisingly, Weinstein said Nov. 15 that the committee didn’t have enough information to recommend adoption of the handbook, and that it should be considered a draft.

The district did have a surprise, though: It had already posted the October version of the handbook, and with no indication the posted version had not been approved by the School Committee.

In early December, after Cambridge Day inquired, the handbook was reposted, this time labeled as a draft.

“It was important to share it publicly as schools began scheduling their meetings,” Wycoff explained in a Thursday email. “It has been acknowledged as a living document open to revisions at any time. Following further discussion on Dec. 8, the handbook was marked as a draft and will be discussed further with the School Committee.”

The handbook review process will be discussed Thursday at a subcommittee meeting. But Weinstein said the main topic is something else – the school communications platform ParentSquare – likely leaving the role of school councils in limbo.

This post was updated Dec. 15, 2022, to refer to School Committee subcommittee “meetings” instead of “hearings.”