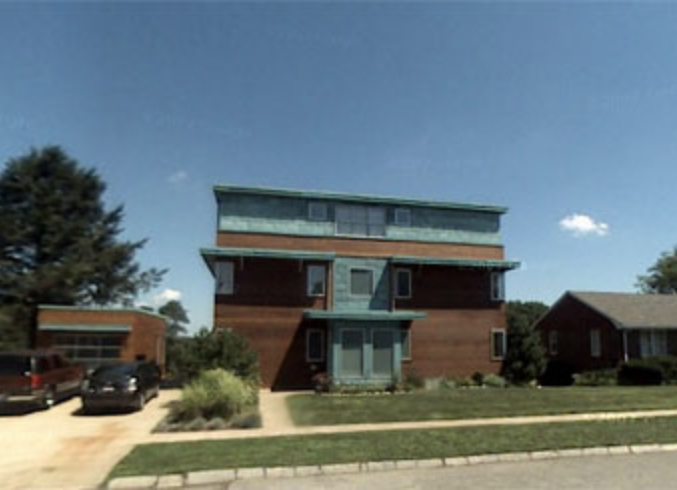 The home at 245 Grove St., on Cambridge’s border with Belmont, is unique in the neighborhood — and under fire from neighbors, who want to create a Neighborhood Conservation District that might keep such construction out.

Things may be tense on Blanchard Road and Grove Street for a while.

Nineteen neighbors on the suburban-style streets bordering the Fresh Pond Golf Course and Belmont brought a petition to the Historical Commission on Thursday after weeks of work that had been carefully hidden from two area homeowners.

The petition, which asks for a Neighborhood Conservation District study, was put off for a month by a unanimous vote of the seven commissioners after protests by the two homeowners who had been left out.

“This commission doesn’t want to get in the middle,” member Frank Shirley told the crowd, explaining the vote as a prod for residents of the 30-plus homes to talk openly as well as a chance for more people in the neighborhood to weigh in — and show up for the next meeting Jan. 6.

Discussion of the study had already been repeatedly interrupted and slowed by audience members with bitter comments and, in the words of vice chairman Bruce A. Irving, “ad hominem attacks.”

“I keep hearing ‘neighborhood, neighborhood, neighborhood,’” said developer Duncan MacArthur, who introduced himself to the commission as the owner of the “infamous” 245 Grove St., the striking, award-winning copper and red cedar three-story that seems to have sparked the battle. “I still believe there are people in the neighborhood who are completely unaware this is happening or this is even being considered.”

Amy Nadel, of 265 Grove St., who initiated the petition drive, confirmed she left out MacArthur and Blanchard Road resident George Helou, who is identified in public records as being a principal in Cambridge-based Kirkland Construction.

“I was frightened,” Nadel admitted, pointing out that MacArthur had just bought the house next to 245 Grove St., where in 2003 he’d avoided city construction oversight by leaving a single wall of a 1953 home standing, evading rules on demolition with a commonly used technicality. “I was afraid that they would immediately put in applications to build on the lots that Mr. MacArthur had just bought. That is the truth. But every other house got” fliers and notification.

It was clear that the admission drove commission members further from a vote on the study. “Well, that alone is —“ member Chandra Harrington said before being cut off by further explanation from Nadel.

Her earlier response to MacArthur’s claim of being left out was that “When you were putting up your house, over all that time, you never asked any of us what we thought … and we’re the ones who have to live with it.”

Standing out among the modest and suburban

Nadel wasn’t the only neighbor expressing distaste for the house, which a Boston Globe story described as striking “an aggressive, modernist profile that homeowners seem to either love or hate.” But the streets, most of which are part of the Strawberry Hill area, are populated with low-slung “country club” houses built in — and for the most part seeming to remain in — the 1950s. Although some swell to three stories at their back, where land slopes down to the golf course and Fresh Pond, from the front they are modest and suburban to an extent unseen anywhere else in the city. The commission’s executive director, Charles M. Sullivan, said the land there had lain undeveloped until 1951, when the unusually spacious lots were staked out for World War II veterans and became “the last large-scale residential subdivision in the city.”

Some homes were adaptations of colonial New England houses such as the Garrison and Cape Cod cottage, Sullivan said, others were more contemporary, in the international and ranch styles. The house at 219 Grove St. was even built by architect Carl Koch, who was taught at Harvard by Walter Gropius. The Koch house became a classic suburban model built by the thousands throughout the country.

But the only structures that stand out are MacArthur’s home and Helou’s, which also raised alarms from neighbors — alarms rejected at length Thursday by the homeowner. “Different tastes for different types. As long as it meets zoning requirements, you don’t have to tell the neighbors,” Helou said. “Your taste is your taste so long as you meet the zoning requirements.”

With a Neighborhood Conservation District, though, that would change. Depending on what guidelines a consensus of residents suggest, a conservation district could add another layer of review to development there. While historical districts such as the one on Brattle Street are stricter, with even exterior paint colors needing approval, a conservation district could stop demolition and the replacement of an architecturally significant home, or put in place design guidelines agreed upon by neighborhood consensus. (But overseen by the commission; only significantly more populous neighborhoods, with more candidates for overseers, can govern their own district.)

But the commission can actually already stop demolition in the area, although MacArthur’s home went up in part, Irving said, because there were no guidelines in prevent it.

That the City Council would not approve a conservation district without seeing a consensus among neighbors, and that the commission wasn’t comfortable doing its yearlong study and making a council recommendation without at least a semblance of neighborhood cooperation. “One of the problems this evening was a sense of ambush, a sense of secrecy, a sense of division before the process even began,” Irving said.

Also, commissioners said, a conservation district was not guaranteed to be the bulwark the petitioners wanted against 245 Grove-style development.

“Architecture does evolve,” Sullivan said. “It’s very possible [even with a conservation district in place] to imagine an appropriate, very contemporary house for the neighborhood replacing an existing house.”

After the commission’s vote, the crowd filed out, murmuring and seeming still very much divided, and some even angry.

Immediately outside the meeting room’s doors, however, Ben Wilson — like Nadel, of 265 Grove St. — shook MacArthur’s hand and apologized for “the ambush.”

They were talking long afterward.