Celebrity wrap-up: Is Affleck suited for, or suiting up for, the ‘Justice League’? Lollapalooza loves Passion Pit 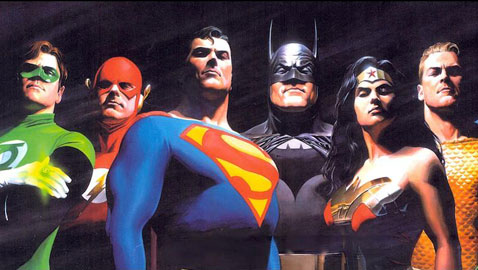 Celebrity wrap-up: Is Affleck suited for, or suiting up for, the ‘Justice League’? Lollapalooza loves Passion Pit

A detail from Alex Ross’ iconic Justice League poster suggests some of the grit Ben Affleck could bring to directing a movie on the team —if Affleck says yes.

Since Christopher Nolan says he won’t touch the “Batman” character again, Warner Bros. is asking Ben Affleck to direct its “Justice League” movie for release in summer 2015, when it would compete with the second “Avengers” movie, according to Variety.

“Affleck is the only candidate who’s been sent Will Beall’s ‘Justice League’ script,” the industry trade says. “Affleck has made it clear that he’s only interested in directing films in which he also stars … so it’s likely that if this pairing ever came to fruition, he would don a suit of his own.”

There’s also plenty of buzz out there that Affleck will soon become the only candidate who’s been sent the script who will also turn it down, since no one except the executives at Warner Bros. are quite sure how having directed and starred in “The Town,” “Gone Baby Gone” and the upcoming “Argo” suggests Affleck is up for turning over years of his life to putting Batman, Superman, Green Lantern, Wonder Woman and The Flash onscreen, especially with recent Hollywood failures for all those characters except Batman. That’s unlike the Marvel Comics-based “Avengers,” which had carefully orchestrated hit movies for each main character before they were combined into a super team. (In a sign of how differently Warner Bros. and DC are approaching the property, Zack Snyder says is already sure Superman in “Man of Steel” he’s directing for release June 14 “will be it’s own thing,” not related to the Superman of the “Justice League” movie.)

Affleck is also still considering starring in a science-fiction drama called “Replay,” based on a novel by Ken Grimwood in which a man gets the chance to relive his life over and over again, Variety says.

On Sunday, Affleck is taping VH1’s Do Something Awards in Santa Monica, Calif., for broadcast Aug. 21. He’s a presenter at the awards, which highlight young activists. Five finalists get $10,000 for their cause, and the winner gets $100,000. Affleck is also nominated in one category for founding the Eastern Congo Initiative, Digital Spy says.

Finally in Affleck news for the week, a video interview confirms that the 39-year-old wants another kid. But wife Jennifer Garner says a fourth child is unlikely. “He’s a great dad,” Garner says. “And the fact that Ben wants another is true. But I can tell you that would be a pretty uphill battle with me. I am not anticipating having any more kids.”

Electro-pop band Passion Pit, after taking July off for a mental health break for bipolar Michael Angelakos, is roaring back, starting with stellar reviews for an Aug. 4 Lollapalooza performance in Chicago that started off shaky and built to be “one of — if not the — best performances of the day,” according to Ian M. Lopez of Lumino Magazine.

When the crowd started singing his words, Lopez writes, Angelakos’ “expression went from disinterested to almost frightened,” leading to the set’s transition “from boring to exciting.”

Watching Angelakos’ attitude change from removed to ecstatic was like watching someone you care for find happiness, inspiring the band and the crowd alike to carry on a set where the movement was the collective work of everyone in attendance. It is because of this that one understands all the hype.

From the third song on, every note sounded better than on their two most recent and very polished studio efforts. Unlike most live sets – where the high note occurs during the first song and, from there, everything is progressively more tiring – Passion Pit’s performance gripped listeners like a fast-paced novel does readers, feeling more eventful every second.

A somewhat obscure Passion Pit song is finding its way to wider release via Tim Burton’s
“Frankenweenie.” The black-and-white stop-motion animated movie, due in wide release Oct. 5, has a 14-song soundtrack, “Frankenweenie Unleashed!” due Sept. 25 with songs from Karen O, Kimbra, Robert Smith, Winona Ryder(!) and Grace Potter featuring The Flaming Lips — and, of course, Passion Pit. Its selection, Indiewire says: “Almost There,” available in Japan or as the B-side to “Take a Walk” from the band’s new “Gossamer” album. Most people got it on vinyl by picking up a copy of the album at an indie record store, making it rare enough that the first YouTube video of it is just one fan setting up his camera to watch his stereo as the record spins.

HumanFankind apparently has a pay-what-you-want download for “Almost There” via this page.