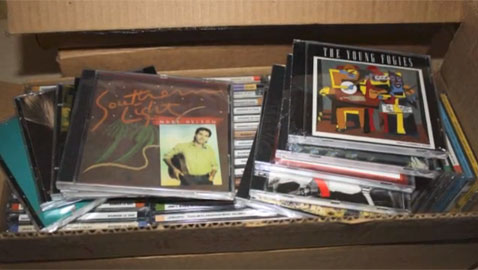 Some of the 4,200 compact discs the Cambridge Historical Society was given by Rounder Records to be archived for use by researchers. A campaign is under way to create the archive.

It’s down to two weeks in a campaign to fund a historical catalog of Rounder Records, the roots label once based in Cambridge.

The Cambridge Historical Society and writer and poet (and Bob Dylan expert) James O’Brien are looking for $3,800 by Sept. 14, and as of Friday they had 42 backers and $2,921, according to their Kickstarter page. If the online crowdfunding campaign doesn’t bring the full amount, the effort gets no money from the pledges.

“The last mile is always the most nail-biting,” O’Brien said.

Rounder, founded in 1970 by three Tufts students, “quickly became the major independent label for bluegrass and folk and recorded a lot of blues, reggae and world music,” the Kickstarter campaign explains. When leaving Cambridge for Burlington after it 2010 purchase by the Concord Music group, it left the city some 4,200 CDs and some vinyl.

“We do have some vinyl records, but not a comprehensive collection,” said Gavin Kleespies, executive director at Cambridge Historical Society. The compact discs, though, are a different story, with the gift representing the best collection of Rounder music Kleespies knows of — certainly in the nonprofit world. That means everything from the esoteric North Carolina banjo player George Pegram (one of the label’s first records) to the celebrated hit 2007 album “Raising Sand” by Robert Plant and Alison Krauss.

“I think even if you had the money, you couldn’t just order one of every record,” Kleespies said.

It makes sense for Cambridge to get the Rounders catalog; its Cambridge roots are deep. Co-founder Bill Nowlin said the label was inspired by many nights spent at Club 47, the forerunner to Harvard Square’s Club Passim, and the other launch record was by a Cambridge-area old-time country group, the Spark Gap Wonder Boys, with both recorded during donated time in Massachusetts Institute of Technology and Harvard radio station recording studios. Further, “our first area distributor was Riverboat, also based in Cambridge, and the first store we sold records to directly was the old Discount Records store in downtown Harvard Square. We were active in both Boston Area Friends of Bluegrass and Old-Time Country Music and the Boston Blues Society, both of which were actually based in Cambridge as well,” Nowlin said.

Kleespies called the collection “a great representation of where this city fits into the national dialogue.”

But 4,200 CDs take up a lot of space, and are not yet catalogued to archival standards. The $3,800 will make it possible to buy binders, sleeves, labeling and a method of preserving liner notes, as well as the shelving to hold it all in the society’s Brattle Street headquarters, O’Brien said. The Historical Society will need time and interns to make the transfer a reality.

“This is going to be a fabulous resource for the public, and probably the only one of its kind,” O’Brien said.

If the funding comes in, the project will begin this fall, he said, with Kickstarter rewards — memberships in the society, mugs, sponsors’ names on parts of the collection — distributed quickly.

In the “Why do this” section of the Kickstarter page, the mission is described more fully:

The collection is important. From field recordings by Alan Lomax to numerous series of world and regional folk music from the Library of Congress, the Rounder Records CD catalog represents a deep well of work that is valuable to musicologists, folklorists, and musical researchers of all kinds. But the records in this collection are also moving, authentic, fun and representative of the full spectrum of artists and genres that Rounder celebrated throughout the years …

There’s so much more to be discovered. The collection spans decades of original recordings, more than a half-century of music in the genres of blues, bluegrass, old time, folk, world and singer-songwriter. This is only the start.