Navigating Cambridge for the newcomer 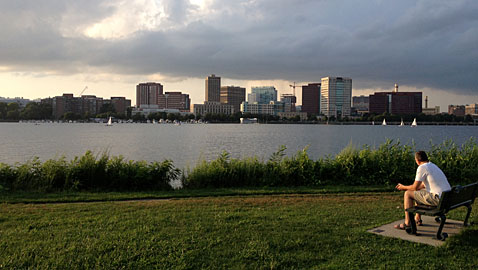 Navigating Cambridge for the newcomer

A man gazes at the Cambridge skyline from the riverside Esplanade of Boston — a city just as confusing, and much bigger, than Cambridge. (Photo: Marc Levy)

Welcome, new students and residents, or simply the confused. You may be wondering about this city of yours.

There’s no real easy way to get into the details, or through them, but Cambridge Day has given it a try with a quick rundown of the city’s history and key facts; a survey of its overlapping areas, neighborhoods and squares; and a look at where the nine bridges of Cambridge connect here and over the Charles River. (All can be found in “About Cambridge,” which is always available on the site’s homepage, but information on the neighborhoods and bridges have also been broken out at the above links so they can be bookmarked separately.)

Longtime residents and experts on Cambridge geography are invited to scan these introductions and offer corrections and additions, either on the specifics or on the best overall way to present the information.

So let’s get started: