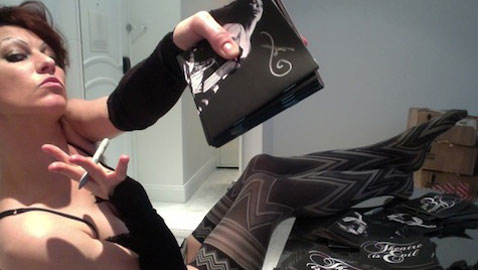 Amanda Palmer has a bloody great video for “The Killing Type,” directed by Tim Pope, and a request for her fans as her album with The Grand Theft Orchestra, “Theatre Is Evil,” is readied for U.S. release Tuesday:

“If you haven’t already ordered it, the clock is ticking,” Palmer said before listing ways to pre-order. “By doing it now, this week, you’ll make a rallying cry of sorts and make sure we have a shot at the Billboard charts. Because honestly? Why make a record if not only to dethrone the Justin Biebers of the world?”

“Well, there are a lot of reasons, I suppose,” she said. “But it would be a nice victory for us and many others.”

When fans have their copies of the album, she’s also asking that they take a picture with it and send it out — by Twitter, for instance, using the hashtag #TheatreIsEvil, or using Instagram or Facebook. “I’ll be watching. Other ominous-type people are watching as we do this all on our lonesome,” she said, likely alluding to her notorious Kickstarter funding triumph in which Palmer, an indie-rock star, aimed to raise $100,000 for “Theatre Is Evil” and wound up with more than $1 million.

“Let’s make sure the Internet’s at least a little bit more evil than usual next week,” she said.

Her links for purchase include a resource for finding nearby independent record stores (“Yay record stores still existing,” Palmer said) and to buy a signed edition via local chain Newbury Comics. People can also visit Palmer’s own site, where they can pay what they want and pick up some bonus tracks. Other links are to iTunes and Amazon.

As a gift to the growing fan base responding to the new video, Palmer’s Facebook page offers a look at the making of “The Killing Type” video, in which she screams at a sleeping lover that “I would kill to make you feel/I don’t mean kill someone for real/I couldn’t do that, it is wrong/But I can say it in a song” as the images turn from stark white to terrifying blood red.

When a fan asked via Twitter why Palmer’s husband, writer Neil Gaiman, didn’t play the sleeping lover in the video, Palmer responded: “Because he feels.” (This prompted a tweet from Gaiman calling it the “best tweet ever.”)