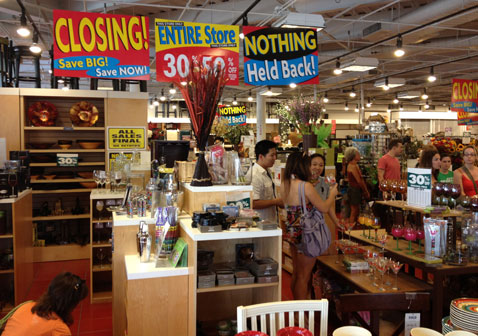 Checkout lines are long at the Porter Square Pier 1 Imports as a liquidation sale aims to clear shelves by Sept. 26. (Photo: Marc Levy)

The Pier 1 Imports in Porter Square is in the throes of a liquidation sale, clearing its housewares for between 30 percent and half off, but this sale is different from the liquidations of its former neighbors — this one is the landlord’s decision, according to Pier 1 workers.

The Blockbuster video went in August 2009, Pizzeria Uno in March 2010 and Jennifer Convertibles furniture five months later, each casting off stores while going bankrupt. But the stock of Pier 1 Imports, based in Fort Worth, Texas, is near its 52-week high of $19.62 per share, and while it closed nine stores in the most recent fiscal year, it opened 15.

Employees at the 1 Porter Square store blame the landlord, KS Partners LLC, and Walgreens, the pharmacy chain coming to Porter.

As of early September, KS Partners already lists 1 Porter Square as a “three-level, 54,265 SF building anchored by Walgreens and Planet Fitness,” although there is no Walgreens there. The chain appeared at first to be looking at what was once Pizzeria Uno — a quaintly tiled two levels with space for outdoor dining and a classic wooden bar on the 1,538-square-foot ground level and full kitchen and booths above in 4,700 square feet. But the Walgreens will go instead into the space now held by Pier 1 at ground level and once held by Blockbuster above.

A “long-term” lease was announced in March in The Real Reporter for what’s called a 21,000-square-foot Super Walgreens:

Some market observers spoken to say they believe the Walgreens lease represents a shot across the bow for both rival CVS Pharmacy — already in an abutting shopping plaza — and a Shaw’s Supermarket that anchors that retail center. According to one Super Walgreens shopper, the experience is far broader than a prototypical unit. Groceries, extensive cosmetics, and aisles of prepared food such as Sushi are staples at other Super Walgreens, some of which even have their own hair and nail salons.

The CVS, Shaw’s and an eatery/gourmet convenience store roughly a block away are open 24 hours a day. Neither The Real Reporter or KS Partners materials say that the Walgreens will match that.

KS Partners bought the plaza in 1997 for for $7.9 million and refinanced in late 2011 with Cambridge Savings Bank and Marcone Capital, the site said.

The Porter Square Neighbors Association got a report in February that Pier 1 was on a month-by-month lease, with its plans after closing in the area unknown. Calls and e-mails went out Monday to officials at Pier 1, Walgreens and KS Partners, but workers say the site is closing rather than relocating, going dark Sept. 26 or as soon as the shelves are bare, while officials say the Walgreens is due to open by the end of the year after extensive remodeling — including ways for customers to move between floors.

Walgreens, based in Deerfield, Ill., lists some 7,000 stores, including a Walgreens at 625 Massachusetts Ave. A CVS is at 36 White St., literally across the street from the coming Super Walgreens.