Cambridge again among ‘100 Best Communities for Young People’; webcast is at noon 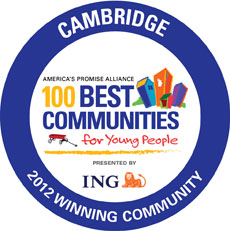 Cambridge again among ‘100 Best Communities for Young People’; webcast is at noon

In a noon webcast, Cambridge will be named of the 100 Best Communities for Young People for the sixth year running in an ING-backed initiative called the America’s Promise Alliance. (The awards are in their sixth year.)

Cambridge will get a $2,500 grant, branding identifying it as of the 100 Best and access to America’s Promise Alliance resources, according to a city press release — but of course the best prize is bragging rights.

“Cambridge is the only community in New England and one of a small number of communities nationwide to be recognized for the sixth year as a 100 Best winner,” Mayor Henrietta Davis said. “This honor illustrates the deep commitment of the City Council and the city administration to the well-being of our children and families.”

Winners were chosen by a panel of judges from a pool of more than 320 nominees from all 50 states, the District of Columbia, Puerto Rico and the U.S. Virgin Islands, officials from the initiative said. There are winners in 42 states, and Cambridge is among 19 communities winning for the sixth time.

Some of the programs that helped Cambridge in the judging:

“The increase we have seen in graduation rates over the past few years is due, in large part, to the hard work communities such as Cambridge have done to make sure their youth have access to an outstanding education and support services,” said Rhonda Mims, president of the ING Foundation and head of the financier’s U.S. Office of Corporate Responsibility. “It is also important for ING to partner with organizations such as America’s Promise Alliance so we can share these best practices and play a role in improving student achievement and the nation’s economy.”

The award ceremony is to take place at the Newseum in Washington, D.C. The webcast can be watched here.