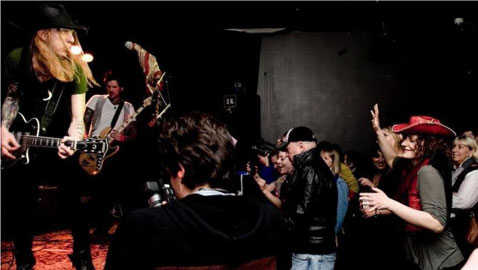 Coyote Kolb performs at the New England Americana Festival at Church in Boston last year. He returns to Friday to play the festival at Oberon in Harvard Square. (Photo: Steve Wollkind)

The Together electronic music festival left Boston for Cambridge in April, and now the three-day  New England Americana Festival has followed.

The third annual roots-music festival arrives for a three-day stay in Harvard Square starting Thursday, boasting more than 50 local acts in five venues — a significant expansion from its first two years, when it took place at Church in Boston. The expansion allows the festival to add elements such as partnerships with local nonprofits, raffle  and the occasional burlesque performance.

This takes the festival “to a completely different level, cementing itself as a yearly must-see event,” organizers said, giving Cambridge a nod as “a breeding ground and focal point of traditional American music for generations.”

Festivities start Thursday and Friday at Oberon and continues Saturday with a free outdoor stage in Winthrop Park before moving inside to three of the square’s historic venues: legendary Club Passim, Tommy Doyle’s and Charlie’s Kitchen.

Wristbands to enter all venues are $15, and three-day passes are available for $35.