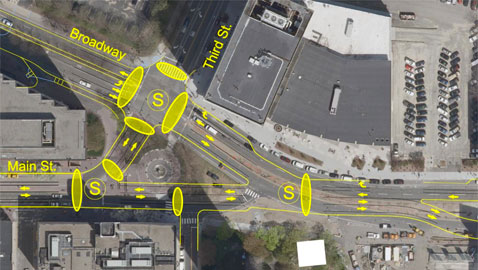 A plan for Kendall Square by Boston-based CBT Architects includes a traffic plan for Broadway and Third Street that “scares the living daylights” out of a city traffic official. The ovals represent crosswalks; “S” stands for a traffic signal.

Even city officials are losing track of where they are in the re-imagining of Kendall Square. The Planning Board wrapped up a meeting with city staff Tuesday by telling them “none of us are very clear” on who’s doing what and when in a process that began last spring with city consultants, boards, residents and the Massachusetts Institute of Technology all playing overlapping and conflicting roles.

“What will you be doing in the next month or two? What do you think you heard from us? None of us are very clear,” board chairman Hugh Russell told staff from the city’s departments of Community Development and Traffic, Parking and Transportation.

“At some point we’re going to have to act on something,” board member William Tibbs said. “Is this going on another six months? A year? I don’t have a good sense of the process. What’s our goal?”

There are more people asking than just Planning Board members.

Only last month MIT appointed a faculty committee to advise it on redeveloping Kendall Square, while the city’s Historical Commission is still looking at protecting three of its buildings and an East Cambridge Planning Team-funded plan has emerged to compete with that of consultant Goody Clancy, staff reporter John A. Hawkinson said Sept. 7 in The Tech.

On Tuesday the Board was also absorbing information on how Longfellow Bridge construction would affect the square.

Susan Clippinger, director of the city’s Traffic, Parking and Transportation Department, gave a rundown of its traffic possibilities and concerns for the square, explaining to the board that the bridge to Boston will be under construction through 2016, done in three phases — the Cambridge-bound lanes; Boston-bound lanes; and the red line — and, when done, bring only one lane of traffic into Cambridge instead of two. There will still be two lanes into Boston.

“What you think of today as the bridge dumping traffic into the area will be quite different,” Clippinger said. “There will be pretty substantial changes.”

Among the most substantial: During most of the $270 million construction starting in the spring, the four lanes of the Longfellow Bridge will turn into one, and that lane will be from, not to, Boston. Red line service should be mostly uninterrupted.

Regardless, when the bridge is back in service, it begs the question of what Kendall Square will look like and how its traffic will flow.

The plan out of East Cambridge, by Boston-based CBT Architects, proposes a complex, signal-heavy traffic pattern that has Clippinger particularly worried about where Broadway joins Third Street and “you have to run things really well. If it doesn’t work, it messes up the intersection behind.”

“I look at this picture and it scares the living daylights out of me,” she said.