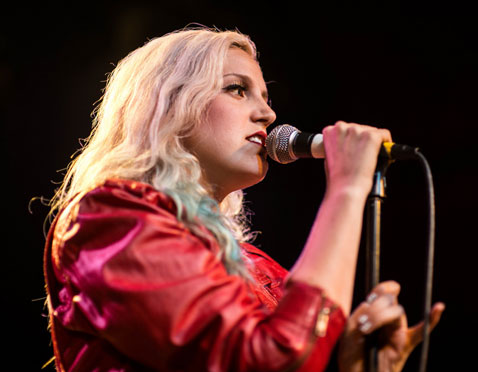 One of our favorite bands, MS MR, has an EP coming out Tuesday.

That’s not quite right: The Brooklyn duo’s “Candy Bar Creep Show” EP is coming out in full on iTunes on Tuesday, but has been coming out song by song since Sept. 4 through Tumblr.

Every Monday a track is revealed with artwork, a video and an official remix, as well as  the musical stems for each song so fans can do their own remixes. The band says it plans to pick favorites and include them in on an official album campaign next year. While there’s some precedent for using fan remixes, album release via Tumblr seems to have been innovated by MS MR.

“It’s no secret we have something of a sweet spot for Tumblr. We like to think of it as a cultural collage and feel like it’s the perfect platform for what we want to present with this EP,” said Lizzie, the female half of the somewhat mysterious band. (Impressively, they have remained mysterious despite a quickly growing fan base and a reasonable amount of touring, including with the high-profile Marina and the Diamonds.)

The first song out via Tumblr was “Bones,” followed by the absolutely addictive “Hurricane” — both performed at MS MR’s way-too-short June 24 set at T.T. the Bear’s Place. From here on out, though, the band looks to be entering less-known territory. If the pre-order track listing can be trusted, Monday’s song should be the new “Dark Doo Wop” and the final song should be “Ash Tree Lane,” another mesmerizing song that somehow didn’t make it onto the T.T.’s set list. It is available as a video — another thing the band does extremely well, and with great intent.

“Ever since we started this project, we’ve been interested in exploring how music transcends and enhances art in all mediums,” Lizzie said. “By releasing ‘Candy Bar Creep Show’ on Tumblr, we’re free to present each song in a larger mixed-media context, giving each song the opportunity to have its own identity and room to breathe and grow.”

The band’s tumblr is msmrmusic.tumblr.com. The iTunes preorder is $2.99.