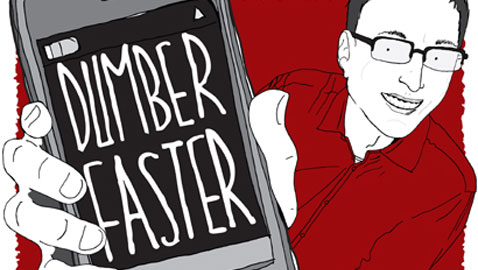 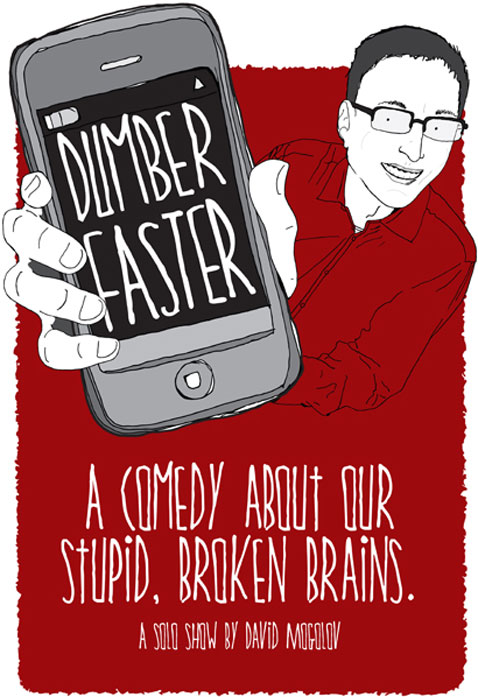 There was a time comic and storyteller David Mogolov couldn’t imagine how he was going to raise a daughter. Now he can’t even work a smartphone.

In his “Dumber Faster,” performed for three more Tuesdays at ImprovBoston, the theater’s former head writer is billed as “determined to reconcile the wonders of technology with his own rampant stupidity, digging into psychological research, Internet culture and personal history to find out if our primitive brains are at all compatible with the greatest technology we’ve ever known.”

Don’t count our primitive brains out. His “There Is No Good News: A Comedy” ended on a hopeful note in 2010. With Mogolov you can count on a master class in hyperloquacious cynicism that argues watchers into appreciating simple pleasures — at the very least, a good story told well.

Mogolov is also the Cracker Jack of comedy monologues: In addition to the stuff you expect, there’s always a prize. In “There Is No Good News” it was a second, 10- to 15-minute show by a different actor and comedian working the same theme with nothing to go on besides the title; this time he and director Steve Kleinedler added an element.

“The part I’m really excited about is an evolution from what you saw in the opening act in 2010 … the first act is now a guest storyteller, usually from outside the comedy community, telling stories with thematic ties, and then doing an interview. It’s sort of what might happen if ‘The Moth’ was a talk show,” Mogolov said. “The first week, the guest was WBZ’s Bradley Jay, and he just killed, and I’m really eager to get these other guests onto the stage. I think it’s going to be a really fun show.”

New York critics and theatergoers agreed. “Dumber Faster” was selected as a “best of” and “a must see” during its run at the New York International Fringe Festival this year .

His guest Tuesday is Laura Sullivan, of the Actors’ Shakespeare Project; on Oct. 9 it’s Mosie McNally, the improvisor, educator, mom and artist; on Oct. 16 it’s Will Luera, interim artistic director at ImprovBoston.