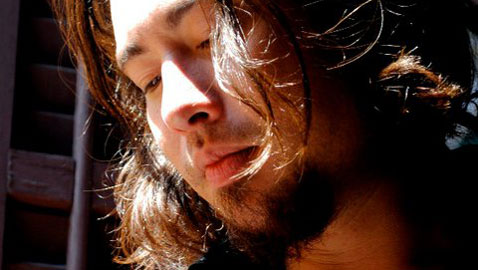 This is not your typical reading. True, author Kent Evans will be on hand Monday at Central Square’s Cafe Luna with signed copies of his novel, but he is coming with a full band, and the band will be playing Evans’ own soundtrack for the book, a fusion of rock, trip-hop and jazz.

There’s probably no better way to get a sense of what Evans’ book tour is like than to check out his performance at New York’s White Rabbit on Sept. 18:

And knowing what the book tour is like, and what the music on the book tour (and available online) is like, prepares the reader fairly well for what to expect from Evans’ novel, “A Crash Course on the Anatomy of Robots.” It’s dreamy, funny and eclectic — a kitchen sink kind of a novel in which reference material, journal entries, bite-size chunks of narrative and poetic observation boil up in a postmodern typographical barrage that captures well the sensory overload hitting Damien Michael Wood as he reels from the agonized death of his mother.

Damien (“The author is not Damien, though I suppose Damien is the author,” Evans is careful but playful in pointing out) runs from this by traveling relentlessly, making “Crash Course” as much adventure and travel fiction as it is self-reflection. The reason it is so well observed in the detail of its travel and raw tragedy can be guessed easily, though: Evans, a world traveler, wrote it after the death of his parents.

“The book is sort of a love song to being an artist, travel, the death of my parents and disastrous relationships,” Evans said. “Damien’s struggle in the book was part of my way of piecing together what had happened to me.” 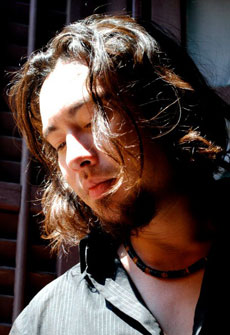 Kent Evans performs readings and music from his “A Crash Course on the Anatomy of Robots” at 6:30 p.m. Monday at at Cafe Luna, 403 Massachusetts Ave., Central Square.

Early on Evans takes a self-deprecating and openly envious swipe at Dave Eggers for writing the novel Evans wanted to in “A Heartbreaking Work of Staggering Genius,” but the picaresque “Crash Course” is reflected nearly as much without allusion in the cold and disaffected work of French poet Michel Houellebecq and with some purpose and direct allusion to a key work by another French poet: Albert Camus.

Publicity for “Crash Course” goes so far as suggesting it “could be described as Albert Camus’ ‘L’etranger’ of our time” and, indeed, in the course of the novel Damien goes from roaming robotically from one scene to another, unaffected by people and circumstances to a burst of violence that makes him technically a wanted man, but not necessarily into a real human boy. Life, and this novel, is too messy for that.

“Thematically there are obviously similarities, with a very existentialist protagonist and the violence that comes from and befalls [Damien]. I even namecheck Camus within the text [and] I kind of view ‘The Stranger’ as sort of one of these essential stories of our era in history and philosophy. I would love to think I was channeling something from the same place,” Evans says, before blowing the thesis with the same brutal honesty found in the novel: “Truth be told my French was never strong enough to get all the way through the book, but I did read most of it while I was living in Paris and pretending to be [Henry] Miller ’round the millennium.”

The book does something “The Stranger” can’t, though, which is apply an of-the-moment technological phenomenon such as the “uncanny valley” found in robotics and animation to the human condition.

As Evans explains it, the uncanny valley is unavoidably traveled to when real humans come across something that’s “practically human,” like Damien, and “just gets creeped out and disgusted by these things ’cause they are so close that all you see is how they’re not human.”

The truth is, “Crash Course” is a messy book. Evans can use first-person journaling and plain old first-person (“My dad used to take me to the Upper West Side when I was little”); the same second-person narrative (“Your name is Damien Michael Wood and you were born in July 1975”) as the Brat Packers when they were writing about flat, cynical actions undertaken by narrators trying to hide from emotion; lightning switches to third-person (“It was therefore, not without a bit of terror and alarm, that Damien learned of the current living situation that could be summarized in one simple word: illegal”); and finally to a fourth-wall, direct appeal to the reader (“You must remember that Marie was the first greatest love of Damien’s life”). The typography is amateurish and the punctuation iffy. But the narrative flies with a seductive, gut-twisting dread that makes it impossible to stop turning the page, whether you’re hoping for redemption or waiting with sickly assurance for the hammer to fall, and the endless references to Stephen King, “Galaxy Quest” and The Pogues makes Damien one of those deadly charming guys you can’t turn down for a drink or two — especially when you’re traveling — even when you suspect the night’s going to end badly.

And while Damien isn’t Evans, Evans is a little bit Damien, and that (along with Evans’ terrific soundtrack and book sales handled by Harvard Book Store) is what you’re likely to get Monday, just with lots of hypnotic, sometimes violent poetry attached.