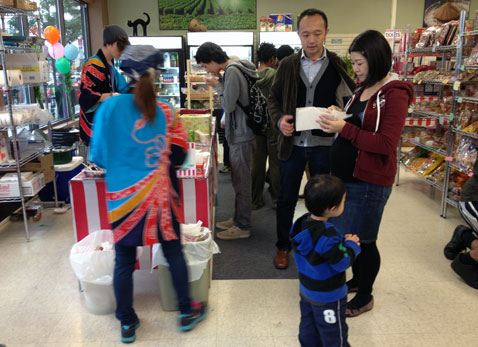 Customers at Porter Square’s Miso Market on Saturday could get freshly cooked Asian foods and even take part in circus-style shooting games as part of the store’s year anniversary celebration. After shopping, they could take part in another activity at the checkout counter: signing a petition to help block the building’s demolition and let the store keep selling there for the next nine years.

“You guys are my favorite neighborhood store,” customer Leanna Balloffet told proprietors Fumi and Stephen Genova on Saturday, leaning to sign the petition.

The market’s neighbors are gone: Bob Slate Stationers closed in Porter, Stellabella Toys moved to Davis and McIntyre & Moore Booksellers announced online-only sales last spring. Now developer Urban Spaces is said to be in talks with the Slate family to buy the 82-year-old brick building at 1971 Massachusetts Ave. — 17,384 square feet of gross area assessed this year at $2.9 million — with an eye toward demolishing it and rebuilding as a five-story condominium building with basement parking.

The project is due for a hearing late this month before the North Cambridge Stabilization Committee after a possible Oct. 10 appearance by the Genovas.

The area went years without a Japanese grocer after Kotobukiya closed in the Porter Exchange in May 2009.

“We’re trying to stay as long as we can,” Stephen Genova said Saturday. “They wanted to get people in here [and now] we feel rushed and trapped.”

Miso Market has a non-demolition clause in its five-year lease, he said, but in considering where to put the store, the couple had been looking long term. They said they were given the impression Stellabella Toys had a 10-year lease, but owner Richard Henry moved about a month ago to a smaller space, saying he was convinced he would be forced to move anyway when the building was sold and torn down.

The Genovas, though, said they signed a lease and spent months installing a kitchen because they were convinced they could have a decade in the location. Now the building’s likely buyers — whose partner is Oaktree Development, the company looking to build a 48-unit mixed-use condominium project around St. James’s Episcopal Church a block away — has suggested the market could be installed in the empty Roach’s Sporting Goods space across the street and even return to 1971 Massachusetts Ave. as ground-floor retail when the condominium building is built, Fumi Genova said.

“That’s easy to say. It took us six months to set up this business,” she said, noting the Roach’s space has no kitchen. “Who’s going to pay for that?”

Information about the committee and its meetings is here.

Update on Oct. 18, 2012: In mid-October the 1,000-square-foot AT&T store at 1 Porter Square closed and posted a sign it was moving to 1967 Massachusetts Ave. — the former home of Stellabella Toys next to Miso Market. While Fumi Genova said she didn’t know of its coming or any changes contemplated by the landlord, she noted that AT&T stores are easy to relocate and could be happy with finding a home for only a couple of years while the grocer rides out its lease. The former Stellabella space, which didn’t show signs of AT&T’s coming, is about twice the size of the 1 Porter Square space.