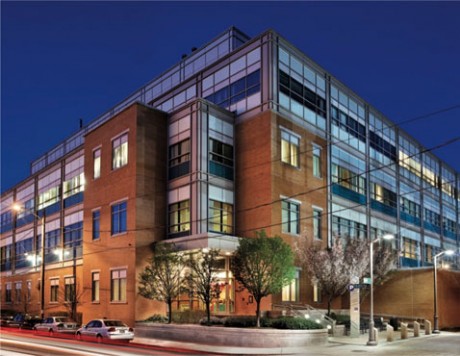 Idenix Pharmaceuticals is moving within Kendall Square to a life sciences building with more room for its workers, a company official said Tuesday.

The company has been at 60 Hampshire St. since 2005 and is moving several large blocks away to 320 Bent St., a 184,405-square-foot building owned by Biomed Realty near the Broad Institute that once hosted such companies as Ironwood Pharmaceuticals and Merck. A filing with the Securities and Exchange Commission shows the company’s lease starts April 1, runs through March 2020 and can be extended by the company for another five years.

The company’s lease on Hampshire Street ran through Dec. 31, 2013, but a move is eased by the fact its current and future buildings are owned by the same company.

Years of conflict with neighbors over noise coming from Hampshire Street rooftop ventilation and air conditioning equipment did not play a role in the move, said Teri Dahlman, Idenix’s director of corporate communications.

“We’re in kind of tight and we all want to stay together. We have lab space as well as office space and it’s good having everybody in the same location. This [new building] fits the bill, so we’re excited about that,” Dahlman said. “We love being in Cambridge and we’re glad to stay in the city.”

While there had been a time Idenix laboratories and office functions were in separate buildings, Dahlman said, the company has “come back to being in the same building and really like that. We were looking for space to stay together again.”

The company is leasing 46,418 square feet of office and lab space, with another 5,596 square feet of additional office space coming available before March 2014 for Idenix’s roughly 80 workers in Cambridge. The move does not suggest the company will be hiring more staff, Dahlman said.

Idenix attorney Richard Johnston told the city’s License Commission at a noise ordinance hearing in June that moving lab space out of Hampshire Street was a step the company had taken to answer noise complaints.

The company “has done all that it reasonably can without completely shutting down the existing research labs,” Johnston said. “As I’ve said, over the past two years the company has moved some research labs out of the building and has made substantial improvements on the roof, but it can’t really take out all of the research labs and continue to function as a pharmaceutical development company.”

Either way, neighbor Peter Lindquist said he was “delighted” Idenix was moving.

“This used to be a quiet neighborhood,” Lindquist said. “Other things have raised the noise level as well, but it was mostly Idenix. And it doesn’t necessarily mean we won’t be back in this situation.”

He hoped Biomed would use the Hampshire Street building for office space — which might need air conditioning in the hottest months but not the level of ventilation needed by Idenix’s lab space. He urged the License Commission to not automatically allow Idenix’s exemptions from the city’s noise ordinance to transfer to a new tenant.

While the commission can’t regulate the use of a building that’s already zoned, said Elizabeth Lint, the commission’s executive director, “I think we can put [Biomed] on notice that we have grave concerns about the usage of the building.”

A message was left Tuesday with Biomed seeking comment.

Idenix develops drugs treating viral and other infectious diseases. Having worked on antivirals for the treatment of hepatitis B and HIV/AIDS, the company said its focus is now on hepatitis C.

This post was updated Oct. 3, 2012, to show Ironwood Pharmaceuticals and Merck were previous tenants at 320 Bent St., and Jan. 8, 2013, to correct the name of Idenix’ attorney. At the point where Johnston is quoted, the License Commission transcript identifies a different attorney as the speaker.