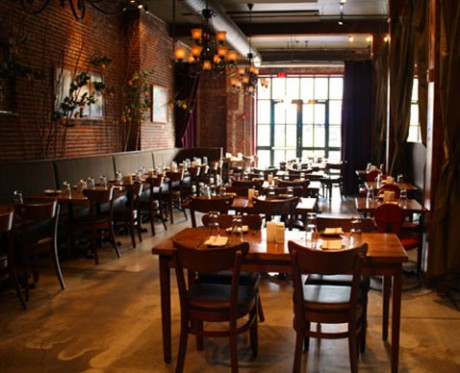 The main dining room at il Casale, in Belmont Center. 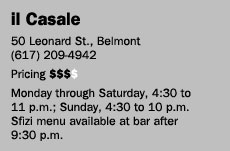 We had been planning a jaunt to il Casale in Belmont Center — by Dante de Magistris, chef and co-owner of Restaurant dante in Cambridge’s Royal Sonesta Hotel — for some time. We had admired its sidewalk trattoria many times when walking by, but when we finally made it there last month it was full, so we dined indoors. The ambiance is at once homey, vibrant and a little romantic.

The fresh potato bread was crusty on the outside, light on the inside. We ordered four Sfizi (little tastes). The semplice salad of mixed greens, gorgonzola fig jam and almonds was light and delightful. The traditional meatballs with tomato ragu were tender and the ragu called for mopping with the bread. Calamaretti were perfectly fried calamari. One special was a seasonal caprese salad of tomatoes with mozzarella and basil. You couldn’t get fresher summer flavors than that.

For the main course, Linda had pan-roasted trout infused with a citrus sauce. Uri ordered Spaghetti alla Carbonara, which consisted of a rich and flavorful sauce of egg yolk, guanciale and pecorino romano over al dente pasta. He rarely orders it but would order it again here.

We finished off the meal with a light peach cake that had a dense peach crust.

This was indeed a five-star dining experience. Il Casale is on the pricy side but the quality, flavor and value are worth it. We agreed that each mouthful of whatever we were eating was among the finest Italian cuisine we’ve ever enjoyed. Service was attentive but not overbearing.

The restaurant opened in April 2009 in an former firehouse in Belmont Center. Il Casale is a joint affair of Dante and his brothers Damian and Filippo. It combines their expertise in food, wine and stellar service. The brothers were raised in Belmont, and when they were children, firefighters from this very location responded to a blaze in their home.

Il Casale’s menu is a blend of the de Magistris ancestral family recipes highlighting modern techniques and the finest ingredients for an amazing result.

You can order Sfizi (small tastes), Primi (appetizers), Secondi (entrees), Contorni (sides) and Dolce (dessert), allowing one to create the perfect meal. We found that it enabled us to have small tastes of many different offerings. We look forward to going back with a larger group so we can try a broader selection of the menu. In this way, one can recreate the family dining experience the brothers learned from their grandmother.