Fired official had ‘too much latitude’ in buying, setting contracts, housing board finds 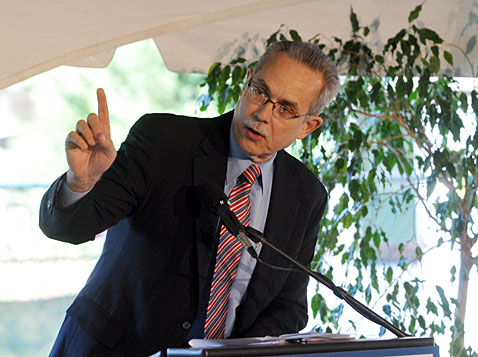 Fired official had ‘too much latitude’ in buying, setting contracts, housing board finds

The move could open the agency to lawsuits by current contract holders or unsuccessful bidders, general counsel Sue Cohen said in answer to a commissioner’s question. “My hope is that we don’t face litigation,” she said.

About $5.3 million in contracts over the past two years, about 4.6 percent of total procurements, did not comply with state buying law, the agency said. Most of the contracts handled by Desrosiers were small awards for operating and maintenance work. The agency’s large construction contracts must follow different requirements and have not been questioned.

Desrosiers, a longtime employee, could not be found for comment. He is challenging his dismissal through Teamsters Union Local 122, which represents him, Russ said. He earned $66,766 a year and was fired Sept. 25. According to an online posting, he started work at the agency in 1994.

Russ disclosed the results of the investigation at an agency board meeting tonight and made public the detailed report. He and other CHA officials presented the findings today to the office of state Inspector General Glenn A. Cunha, Russ said. “They were appreciative of us taking action to come to them,” he said.

There was no evidence of “criminality,” but rather “incomplete and sloppy work,” Russ said. Examples included not advertising bids in a newspaper, no evidence of required insurance, bonds and certifications by bidders, no examination of successful bidders’ qualifications, not inquiring why only one bidder responded to a request, contracts dated before board approval and giving wrong information to the board about the bidding process, such as saying there were five bidders when only two companies bid.

It’s not clear whether the violations resulted in higher prices, Russ said. About two-thirds of the deficient bidding — 20 out of 31 contracts — had more than one bidder.

State purchasing law is complicated and exacting, requiring 30 steps for compliance, officials said. “It sounds like the job was difficult and tedious and [Desrosiers] seemed isolated from the rest of the authority,” CHA Commissioner Gerald J. Clark remarked.

Problems were “random,” with required documents appearing in one file and missing in another, Russ said. “A number of core things were executed correctly,” he said.

The findings were “very difficult,” though, particularly the instances where the board got incorrect information, Russ said.

“We trusted the person,” he said.

“On reflection it is clear that the chief procurement officer was given too much latitude in the handling of the procurement process,” Cohen said in a memo to Russ released at the meeting. The authority will now require two people to check bidding documents for compliance and will mandate additional reviews, Russ said.

As reported, Desrosiers was suspended with pay in early August after officials questioned material he had prepared for board approval for a contract to maintain and operate coin-operated washers and dryers at the agency’s public housing developments. Officials found inconsistencies and missing documents in the file for the contract, Russ said. One company had bid on the contract, worth an estimated $50,000 to the authority; it was not awarded.

The agency then hired a consultant to examine purchasing contract files over the past two years. It hired another consultant to analyze those findings and make recommendations. That consultant, Calyptus Consulting Group, of Cambridge, found deficiencies in 36 files, of which 31 resulted in awarded contracts. Eleven of the 31 had only one bidder.

Calyptus recommended rebidding 15 contracts that have not been completed and amending the terms of a 16th award. The remaining 15 contracts have been completed. Russ said agency officials will begin the rebidding process in the next two weeks. Many of the contracts to be voided were “drawdown” contracts, meaning companies were hired as needed up to a maximum amount. Rebidding in those cases might cause less harm to contract holders, officials said.