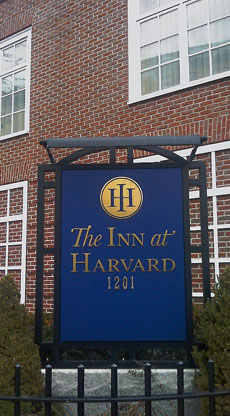 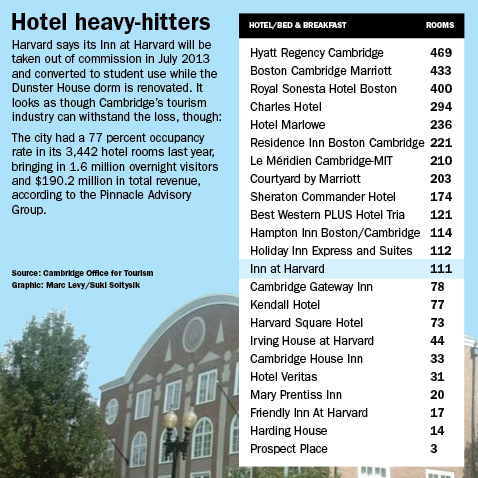 The loss of the Inn at Harvard will undoubtedly be a blow to Cambridge’s tourism industry, but the team behind it is looking for a project to replace it, said Robyn Culbertson, executive director of the Cambridge Office of Tourism.

The stately brick inn, built by Harvard in 1991 on the eastern side of Harvard Square, is closing July 15 and will hold students while a dozen undergraduate dorms are renovated, confirmed Richard Carbone, its general manager. First up is a 15-month renovation of Dunster House in a plan that still needs approval from the Harvard Corp., according to Harvard Magazine. (Paperwork for change in lodging houses hasn’t been received by the city, according to the License Commission.)

That will take 112 rooms off the market in a key tourism market for Cambridge and the region — in fact, blocks from the busiest station in the Massachusetts Bay Transit Authority subway system. Although the Pinnacle Advisory Group, a Boston-based hospitality consultant, said Cambridge’s 3,442 rooms had only a 77 percent occupancy rate last year, Culbertson believed losing the inn would have impact in both the business and personal sense.

The Inn at Harvard, built in 1991 in Harvard Square, will become Harvard dorm space after closing in July. (Photo: slworking2)

“It’s just done so well, and Mr. Carbone does such a wonderful job of running it, that I think it probably ran longer than Harvard expected it to,” Culbertson said, noting that the space was to be used as a hotel only until Harvard needed it for other purposes. “It’s just going to be sad because we love the Inn at Harvard.”

City councillor Ken Reeves has publicly bemoaned the loss of the inn and its failure to at least meet the quarter-century mark at least twice. Culbertson understood.

“It had such a wonderful reputation and served the university and its clientele so well that it maintained a really good occupancy level and some hefty rates in the market. There will definitely be an impact,” she said.

In the 21 years the inn has been open and the 18 years the tourism office has been operating — funded by the city’s hotel room tax — Cambridge has gained the 236-room Hotel Marlowe near Lechmere, the 31-room Hotel Veritas even farther east in Harvard Square and a 203-room Courtyard by Marriott in Kendall Square that was once a Radisson and, before that, a Howard Johnson Hotel.

“We’re used to gaining and losing a little bit in this market. We’re kind of taking two steps forward, one step back,” Culbertson said. “I know Mr. Carbone is looking for another project to develop, and I think he is getting help from people in the city and Harvard, so my hope would be that we would be able to replace those rooms with something of the caliber and style of an Inn at Harvard. But there’s nothing that I know that’s definite.”

Carbone, who is also chief executive and founder of Collegiate Hospitality, which runs the inn and the Harvard Square Hotel, could confirm he is looking for another project in the area. That includes Cambridge and Somerville, where the Somerville Patch reported this week that the city is to seek proposals to build a hotel atop a parking lot at Day and Herbert streets.

“We’re looking within the marketplace to see what might be available for replacing the inventory we’re taking out,” Carbone said.

While acknowledging visitors to Cambridge have other hotel options within Harvard Square, including bed and breakfasts, the Sheraton Commander, Charles Hotel and his own Harvard Square Hotel, refreshed this year by a $5 million renovation, he was also proud of what he’d accomplished at the inn over the decades. “We have a very nice place here. Our employees and our service are very high level, and we’re small and have a very tourist-oriented culture,” he said. “I think the other hotels are going to have to step up their service to fill that gap.”

Hotel staff still have several months of work left and will stay focused on business, likely not planning farewell events until early next year, Carbone said. The 80 workers could be offered work elsewhere with Harvard or, if the timing works out, at his next project.

“I think he’s focused on being very positive about the whole thing and finding other opportunities with his management company,” Culbertson said of Carbone. “He’s an innkeeper in the true sense of the word. That’s one of those things that impressed me so much about him at the Inn at Harvard — as the general manager, he moved his desk out into the lobby. He greets all his guests. He’s just taken such a person interest in that property, and I attribute him as a good bit of the reason it’s been so successful. So I hope we can keep him in Cambridge.”