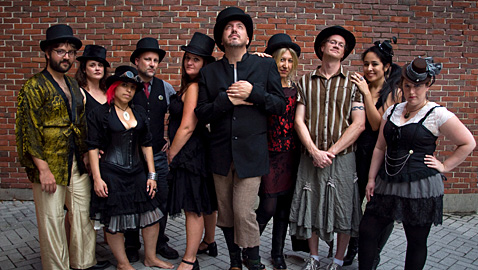 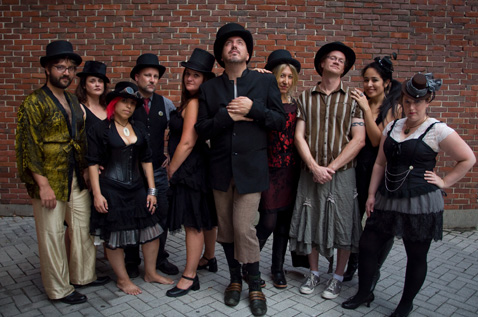 What Time Is It, Mr. Fox? is among the performers transforming literature into music and dance Thursday at Org: Literati at Oberon. (Photo: Justin Moore)

It’s murder that inspired the coming week’s multimedia event at Oberon — the 1959 murder of the Clutter family in Kansas, which led to the 1965 Truman Capote nonfiction novel “In Cold Blood,” which inspired the art band Jaggery to record a five-song EP called “Private Violence,” which gets its official release as part of the Thursday event called Org: Literati. The Orgs include music, aerial performance and dance, film and theater, and this one even adds a bit of formal if funny education from Mika Cooper, a former English professor serving as emcee.

Org: Literati promises to feature work inspired by writers from Yeats to Jean Genet to Dostoevsky, and that variety’s good considering the more specific Org: Murder Ballads went up at Oberon in June 2011, when Jaggery finished the digital version of “Private Violence.” (The physical CD includes a book of lyrics and packaging with photography and design by Noah Blumenson-Cook.)

The band “wanted to wait ’til we were good and ready with the artwork, which we let ourselves indulge in,” said Singer Mali, the guiding force behind Jaggery and the Orgs. “We couldn’t be more excited to share it with the world.  The CD packaging is without a doubt the most beautiful we’ve created.”

Among the performers Thursday is What Time Is It, Mr. Fox?, which singer Brian King said will be performing original songs inspired by writers such as Genet, Anais Nin and George Bernard Shaw, “as well as one of the most famous songs ever written about a classic novel.”

Also performing is Gem Club, a trio making moody chamber pop that has served as soundtrack to shows including “Parenthood,” “Private Practice,” “Revenge” and the U.K. version of “Skins” and now up for three Boston Music Awards; UnAmerika’s Sweetheart Karin Webb; live artist Kristilyn Stevenson; and of course Jaggery, collaborating with Eileen Little and Jennifer Hicks.

“This Org includes some of my favorite Boston-area performers who haven’t played an Org in years,” Singer Mali said.

The performers hope audience members play a role in the event by coming in costume as their favorite literary character, and they are asked to bring a copy of a favorite they are willing to part with.