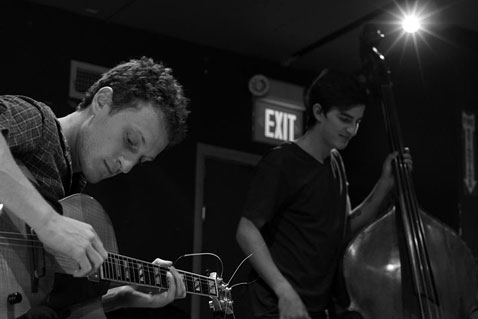 The Matt Delligatti Trio is impatient.

Delligatti, 20, formed the band in March when he felt constrained by his classes at the New England Conservatory, and in less than five months it has defined a sound, released a six-track digital album and packed a mid-September debut show at Lilypad. Delligatti immodestly looks forward to “revolutionizing music” in Cambridge and beyond and hopes to bring the band to Chicago, New York and even Europe.

Influenced by jazz musician Ornette Coleman, noise band Deerhoof and some strains of classical music, the trio has a sound that combines improvisation, a unique compositional style and untraditional chord progressions.

“Music in general is still growing and changing a lot,” said Delligatti, a guitarist. “We’re just pushing the boundaries of music and we value that we have a unique voice. We keep searching for new forms and genres of music because its important to question any kind of preconceived notion of what music should be.”

“I was getting really frustrated with the music I was playing in school. I didn’t know what kind of music or style I wanted to play,” Delligatti said. “Joe Morris encouraged me to write my own music and told me that would help me decide what type of style I should play.”

Delligatti took his advice and started experimenting. After writing several songs, Delligatti recruited upright bassist Pat Kuehn, 20, and drummer Jeff Balter, 24, who have also taken advantage of Morris as a mentor. The trio worked with Delligatti’s already-written songs and together developed a unique sound:

“Our music can be really dissonant and complicated sometimes, but I think it appeals to a natural sense for people,” Delligatti said. “I just really hope that our music is for everyone, because I don’t think we can help it.”

The band brings its avant-garde sound back to Cambridge at 8 p.m. Wednesday — this time at Outpost 186.

For information about the Matt Delligatti Trio and upcoming performances, click here.