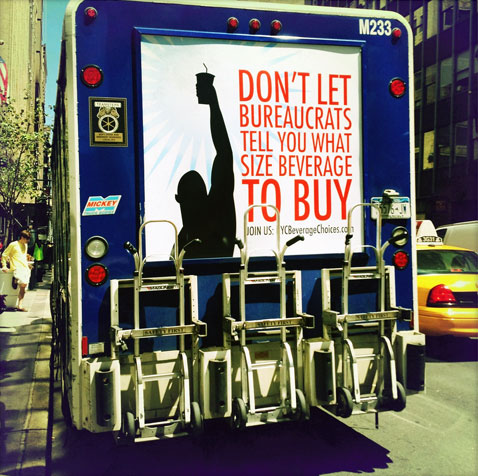 A limitation on soda sizes has drawn corporate opposition and a lawsuit in New York City. A proposed version of the law for Cambridge hasn’t passed the study stage. (Photo: Bonnie Natko)

Mayor Henrietta Davis sparked headlines around the country when she proposed in June that Cambridge consider imposing size limits on sugary drinks. Cambridge might want to follow the lead of New York City and its mayor, Michael Bloomberg, in banning supersized sodas to fight obesity, Davis said.

But while New York adopted a controversial and groundbreaking 16-ounce limit on sodas and has it scheduled to take effect in March, the Cambridge initiative is bogged down amid doubts about its effectiveness, and what one activist called timidity.

Davis’ proposal lost steam almost immediately.  Her policy order asking the city manager to refer the issue to the Public Health Department for a recommendation didn’t pass. Instead, councillors agreed to send the order to Marjorie Decker’s community health committee. In other words, the committee will recommend whether the Health Department will recommend.

If that isn’t convoluted enough, city and health officials agree councillors have no authority to impose a size limit on beverages in restaurants — only the Public Health Department can do so.

The city’s Food and Fitness Policy Council is leaning the same way, Jacob said. The council, established last year to develop citywide strategies to improve nutrition and fitness, write food guidelines for public programs and expand access to good food and exercise in low-income neighborhoods, operates under the Health Department but includes members from outside city government.

Jacob also mentioned a lawsuit against the New York City regulation that had been filed by the beverage and restaurant industry the previous week.

“Clearly we’re here to protect residents, but in light of the suit,” Jacob said, “we want to take more time to look at it.”

Jacob provided copies of a draft report from the council to the subcommittee, whose head, Deborah Klein Walker, refused to make it public because it’s a draft.

Walker, a former associate state health commissioner, expressed her own doubts about beverage size limits during discussion among committee members. “Where is the evidence to show it would really work?” she said.

A call for more

In contrast, another member, Moacir Barbosa, called for action or at least stronger words. “I’d probably want to be a little bit braver than this,” Barbosa said, referring to the draft report.  “There’s a point at which you have to try something.” Barbosa, an advocate and worker for young people,  is assistant director at Health Resources in Action.

Health Alliance Chief Executive Patrick Wardell, who attended the meeting, asked whether “as the public health department we should be developing a broader program.” Jacob said the policy council is working on such a program, which might include banning sugary beverages in vending machines in public buildings and “persuading residents to drink tap water.”

In the end, members of the subcommittee, including Barbosa, agreed to Walker’s suggestion that the subcommittee defer action until the Food and Fitness Policy Council submits a final report, expected next spring. Committee members also agreed not to take a vote on the deferral.

The contact person for the council — Dawn Olcott, of the school nutrition program — was called for comment, but the call back came from a public relations staffer for the Health Department. Spokeswoman Susan Feinberg didn’t respond to a question seeking the names of council members, and said Jacob declined to be interviewed because the matter is under study.

Feinberg did issue a statement via e-mail saying the department will work “closely with the Cambridge Food and Fitness Policy Council and city government in considering the City Council’s ‘soda ban’ proposal.”  The department will assess the issue “in the context of other similar promising practices and evidenced-based policies for decreasing consumption of sugary beverages,” the statement said.

Peter Christie, head of the Massachusetts Restaurant Association, said he understood the aim of supporters of a soda size limit. “They’re trying to create obstacles to give people the opportunity to think a little more,” he said. “It’s well-intentioned, but personally I think it’s a bit of a nanny state to think citizens in Cambridge couldn’t make a decision on their own.”

“I’m not crazy about [big soda containers], but you need a balanced approach,” Christie said.

The association won’t take a position on the Cambridge proposal until it sees the final details, he said.

Meanwhile, the industry group is working with the city of Boston to improve restaurant meals for kids, Christie said. Restaurants that serve children would feature at least one “healthy meal” for kids, including two servings of fruits and vegetables, water or skim milk as the beverage, and possibly no fried foods, Christie said.

The city and the association hope to roll out the program early next year. Unlike a regulation, it will be voluntary for restaurants, Christie said.