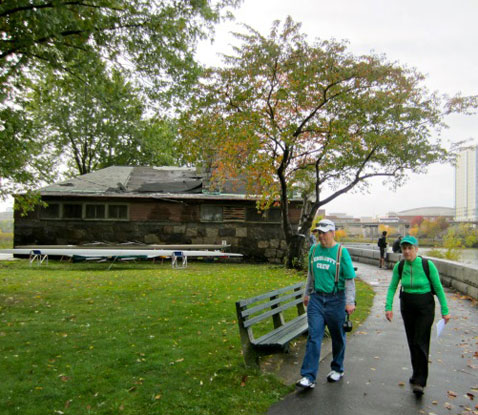 The roof on the 1818 powder house at Magazine Beach is in need of $100,000 worth of repairs, according to the Cambridgeport Neighborhood Association.

A $2.2 million revamp is in the future for Magazine Beach, Cambridge’s second-biggest park, but the first step is raising $100,000 to fix and replace the park’s powder house building.

A campaign to raise the money was announced Friday by the Cambridgeport Neighborhood Association, which is leading citizen revitalization work at the deteriorated park and has seen some success in gathering state-level support.

“This is a significant step in revitalizing Magazine Beach, and it can’t be postponed any longer,” said the group’s president, Bill August, referring to fixing the powder house roof.

The aim is to make Magazine Beach “a spectacular Cambridge destination,” and the building could play a role in that by being converted from its use as storage for the state Department of Conservation and Recreation to holding a snack bar, kayak and canoe rentals, a farmers market and exhibits that could explain its history.

The granite structure went up in 1818 to store gunpowder for the local militia and ships docking in Boston Harbor, said Cathie Zusy, a resident active in the revitalization efforts and leading the roof’s capital campaign. (Another name for a place storing ammunition, of course, is a “magazine.”) In 1899 the Olmsted Brothers – the landscape architects behind Boston’s “Emerald Necklace” of parks – converted it into a bathhouse when swimming was a popular pastime in the Charles River. When that use faded in importance after a polio epidemic (and growing river pollution), the parks department converted it into a utility shed in 1953.

Because of the building’s significance, the Cambridge Historical Commission will be overseeing renovations with the state, Zusy said. The DCR gave $50,000 for a report on the building, assessment of the condition of the roof and a first step in stabilizing it, while the City of Cambridge contributed $25,000.

“The structure is deteriorating and I’ve long wanted it restored,” said Charles Sullivan, executive director of the commission.

The rotting sheathing boards and rafters under the roof and the slate on top are to be replaced next year, clearing the way for the next steps in the Magazine Beach project: finding a DCR “historic curator” to lease the building; adding the powder house building to existing landscaping plans and putting those plans into effect, for about $50,000; and pinning down a design for Magazine Beach and implementing it, with Zusy giving the current estimate at $2.2 million.

Meanwhile, DCR funding has been cut by 30 percent since 2009.

“This is why public private partnerships like this one at Magazine Beach are critical to making park improvements,” Zusy said.

Tax-deductible donations can be made by writing a check to the Cambridgeport Neighborhood Association with a note that the money is for use on the Magazine Beach Project. The check should be sent to treasurer Jay Shetterly at the CNA, 127 Magazine St., Cambridge, MA 02139.

One hundred percent of the designated money donated will be used on the roof repair, Zusy said.

The association filmed a video to explain the project:

This post took significant amounts of material from a press release. It was updated Dec. 9, 2012, with language about the “historic curator” program in which an outside party converts a building into a new use in exchange for an extended lease to use it.