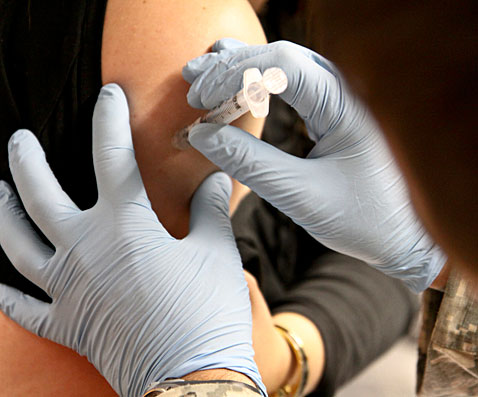 Doctors across Massachusetts are reporting more cases of flu, with the highest level in the outer suburbs of Boston. (Photo: U.S. Army Corps of Engineers Europe District)

Fewer people older than 65 got flu shots this year at the city’s public flu clinics, and the total number of people of all ages who got vaccine at the clinics also fell from last year, the city Public Health Department reports.

As of  this month, 172 seniors had been vaccinated for free at the city clinics, a 13 percent drop from last year, when 198 got shots. A total of 1,348 children and adults, including seniors, got the shots this year, a 9 percent decrease from the 1,489 served at the clinics last year.

These statistics include shots administered at homeless shelters and at meals programs, as well as at the large flu shot clinics held in public housing developments and city buildings, the department said.

A health department spokeswoman said the agency believes more people, including seniors, are getting vaccinated in doctors’ offices and at supermarkets and pharmacies. Medicare and most health insurance plans cover flu shots by doctors and drugstores.

The city offered nine public clinics in October and November, including sessions at the North Cambridge and citywide Senior Centers and at the Burns and L.B. Johnson Apartments, public housing projects for seniors. The clinics have ended but there is vaccine available, and people can get shots by appointment at the department’s office on Windsor Street.

Flu activity increased sharply across the state in the second half of this month, according to state health officials. State and federal agencies keep track of flu cases by monitoring reports from doctors offices that have volunteered to serve as “sentinel” practices. During the week that ended Friday, an average of 2.1 percent of visits to the sentinel offices were from patients with flu-like symptoms, much higher than usual for this time of year, the state health department said.

Doctors across the state reported an increase, with the highest level in the outer suburbs of Boston. Flu season generally ends in March.

In the past few years, public health officials have focused vaccination efforts on children because of their ability to spread the disease and because flu can be fatal to very young children. There have been eight deaths of children nationwide associated with influenza this year, the Centers for Disease Control and Prevention says.

Previously flu shot campaigns targeted seniors because they are more likely than younger people to be hospitalized and die from flu and its complications. Studies have shown the vaccine is least effective in the elderly, though.